On Saturday, May 30, the local Games Workshop store hosted the second annual Astro-mini-con, a Warhammer 40K tournament. They filled all 14 available slots and had people on the waiting list.

Christian and Keith ran the tournament, using scoring similar to that used in the normal Astronomi-con circuit tournaments. That is, game play was worth less than half of your total score, with the rest coming from appearance, army composition, sportsmanship and the like. There was a different scenario on each table, all requiring very "outside the box" tactics from the standard scenarios in the basic rules. 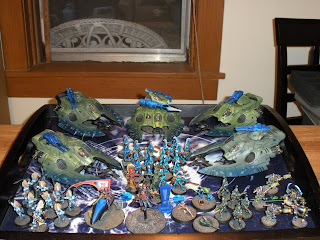 The first game was against Lance's Space Marine army. Lance started playing 40K back when it first came out. Some of his infantry were the old plastic "beaky" marines from the first box set from 1987. He's had custom decals made up for his chapter marking on both the marines' armour and their vehicles. Very nice.

That's a LOT of heavy armour. If I didn't have to actually fight them, I wouldn't.

Scenario:
Your patrol is attempting to disengage from the enemy which is in pursuit. Evade enemy forces and get them back to your lines. Your commander is awaiting their report and your forces are moving in to hold off the enemy!

Special rules included Victory Points. Each side had to choose a unit to act as its Lost Patrol. That unit would set up within 12" of the enemy board edge (for vehicles and fast units, they basically set up at the board edge). If they ended the game within 6" of your own table edge, they scored an extra 300 victory points. Everything else on both sides would come on as reserves.

The terrain was basically farmland, with some hills and small forests scattered around the edges.

I won choice, so the Swordwind went second. The Space Marines set up a tactical squad on foot, in the southwest table corner. I set up the Fire Dragons in their Wave Serpent skimmer, in the northeast table quarter. My thought was that if their boat was shot down early, the Fire Dragons' and their melta weapons might cause some damage to the enemy tanks, before they were wiped out.

For reserves, the Warp Spiders would not deep strike, and the Banshees would stay on foot.

The game started, and the Space Marine squad ran north to mid-table. The Dragons' Wave Serpent skimmed south and west, trying to stay away from the eastern table edge, mindful of the outflanking melta squad. The Serpent's prow was turned to point straight north, to use the Serpent's energy field to guard against enemy anti-tank fire, and keeping in mind the lascannon in the hands of the tactical squad already in play.

The Space Marines rolled for reserves, getting the Land Raider and its occupants, one Vindicator, and the outflanking Tactical Squad. Where would the Tacticals come in? This was a crucial roll, since they could randomly appear on either flank. Lance rolled - and they showed up on the western table edge. The Space Marines moved onto the table in a block, in the northwest table quarter. Firing from the Land Raider failed to breach the Wave Serpent's hull.

The Swordwind tried for an all-out effort, adding the Autarch's "+1" to all reserves rolls. Everything but the Fire Prism showed up. The two Avenger squads came on and dismounted in range of the Space Marines. The Spiders teleported near the Marines, for some up close work. Risking a dangerous terrain test, the Autarch moved onto the top of a farm building, to also get a shot at the Marines. The Farseer bravely hid behind an outbuilding. The Banshees entered the table on foot, too far from the action to get into the fight. The Banshee's Wave Serpent moved flat out north, interposing its hull between the bulk of the Eldar forces and the Space Marine fire sure to be coming next turn. 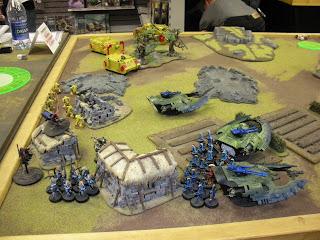 Meanwhile, the Dragons in their Wave Serpent skimmed into the southeast corner of the table beside a hill.

After a Bladestorm, the other Avenger squad had no targets - the surviving Marines were behind a ruined building. The Spiders and Autarch still had line of sight though, and the Marine's Lost Patrol was wiped out. In addition to the vp's for the sqaud itself, this prevented Lance from gaining those extra 300 vp's under the scenario rules.

The Spiders moved forward with their second jump to intercept the melta squad to the north, and the Autarch used his jetbike slide to get off the building and try and shield the Avengers. 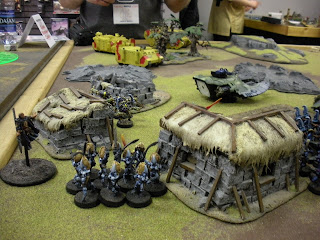 The second Vindicator then showed up. Moving into some woods the two assault guns were out of range of the bulk of the Eldar forces. The Land Raider bounced another lascannon shot off a Wave Serpent's energy field. The Rhino successfully negotiated some craters, and the Marines disembarked and shot up the Spiders, killing all but one - whose morale fortunately held.

The Fire Dragons moved into the very southwest corner of the table, behind a hill, out of line of sight of everyone. They stayed there for the rest of the game, hoping they'd survive.

The Avenger squads both mounted up and moved east hugging the southern table edge, keeping away from the short-ranged but deadly shots of the Vindicators. Serpent fire immobilized and pulled the guns off the Rhino. The Farseer Doomed the Space Marine Tactical Squad, and the Autarch led the Banshees in a charge. After 35 power weapon attacks, the Marine squad was wiped out, and the victors consolidated east. 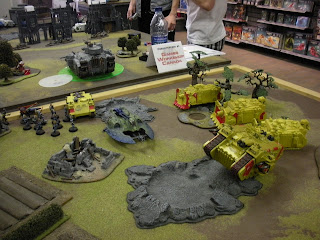 The last Vindicator self-propelled gun showed up and joined its brothers. Some of the Banshees were killed by incoming fire, but their morale held. They mounted up in their skimmer and headed east. Meanwhile, the Autarch headed north and attacked the left-most Vindicator with his meltagun, destroying it. He used his second move to place its hulk between himself and the rest of the Marine's wall of iron and steel.

The Land Raider advanced right through a crater, dismounted the Terminators and Sicarius, and shot down the Banshee's Serpent. It was merely wrecked, which was not what Lance wanted - the surviving Banshees were out of charge reach when they were forced to disembark.

I had been rolling "1's" for reserves for the Fire Prism tank all game. Now, at the bottom of the fifth and final turn, I forgot about the tank entirely. As it turned out, I didn't need it.

The Autarch moved east behind another Vindicator, stunning it. The Farseer Doomed the Terminators. One squad of Avengers dismounted and the last Spider moved in for the kill. The Banshees advanced within charge reach. A Bladestorm and other fire killed a couple of Terminators. The firepower included the Banshees' pistols; that's maybe the third time in 5 years they've fired those things. 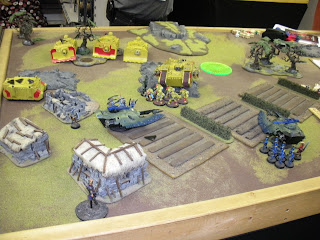 The Banshees charged home. One Banshee wounded Sicarius and was killed in return, but the rest of the Terminators were wiped out. As the game ended, Sicarius was last seen fighting on alone, surrounded by Eldar warrior women, whose swords were raised in anticipation: 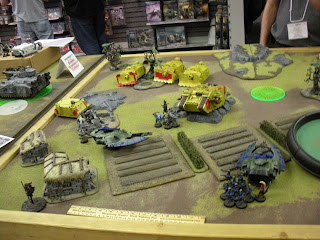 The Eldar forces had destroyed two Tactical Squads, a Terminator Squad, and a Vindicator assualt tank, scored half points for the two damaged vehicles, and the bonus 300 vp's for bringing the Lost Patrol home. The Space Marines scored vp's for the downed Wave Serpent skimmer tank and partial points for the Warp Spiders and Howling Banshees, who were both below half strength.