The enemies of GünSchwarm continue to increase their forces - see last week's battle report for details. In particular, I was pretty disappointed when we lost our Panther on the first shot of the game!

There were several reasons for this setback- an alarming string of good luck from Cam recently, and my poor (or perhaps overconfident) deployment of the tank in the line of fire right at the beginning of the game all contributed.

Although we pretty much got our revenge on Mike F and Cam thanks to what amounted to an un-killable Flakpanzer (AA vehicles vs. infantry = good times), I was still ticked that the Space Panther had bit the big one without even firing a shot in the defence of New New Berlin's ruins. After the game, Frederick provided a short and accurate assessment of the GünSchwarm Space Panther situation - "you need another one". 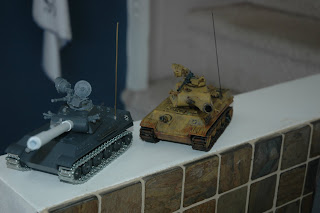 So I took out another Solido Panther, a hacksaw, a GW tank sprue and got to work. I decided this tank would also have an open hatch with a tank commander. Since I was already in the hock to F*** World, I used a Death Korps of Krieg tank commander from GW. The figure is great, and fits in well with the GW Steel Legion troops who are providing the fighting bulk of GünSchwarm. 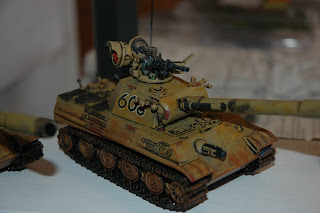 The process, painting etc was the same as the first Panther. For whatever reason, the desert yellow colour is a little brighter on the second tank. I was going to worry about it, but then I figured it was close enough. With Future Gordon Brown on the loose, we can't get worried about the shade of yellow on the tanks. Besides, someone from TMP will point out where I screwed up and I'll know for next time.

GünSchwarm now has another Space Panther to back up the troops. If those APCs from Old Crow ever show up, we'll be busting loose from New New Berlin and heading straight for New New Old Moscow! I believe Brian referred to it as a "Blitz-Schwarm"...we'll see... 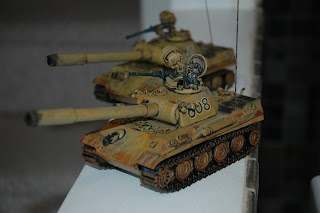 Those are amazing! Great work!