As Dallas continues to expand the FutureKom armed forces, it is time to get some armour into the lineup for their opponents - now to be known as the "Guun Schwarm" (I would have put the little umlau over the "u" if I could figure out how...). I'm using GW's Steel Legion figures for troops, but the Guun Schwarm will need tanks to overcome the power of FutureKom.

To try and keep a counter-point to the soviet look and feel of the FutureKom, I thought I would start with the German Panther tank - a 1/50 model from Solido. This would be modified to try and provide a sci-fi look and feel, almost to GW standards - i.e.with an absurd main weapon. 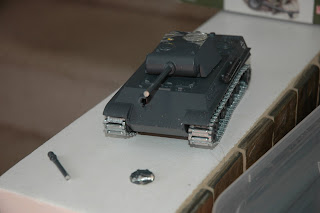 The first step was to use a hacksaw to cut the gun and cupola off. Cutting the cupola away was a major pain, but it was one of those things that, once you start, you can't really leave half-done, so I kept at it and finally shaved it away. I then used a Dremel tool to try and balance the surface off a bit after the hack job.

I also cut the gun barrel away. After all, the long barrel 75mm gun looks reasonable, and we're going for sci-fi here. 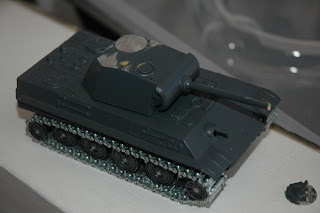 Using chunks of plastic tube, the Panther was upgraded to a 120mm gun, a calibre I felt would be suitable for the "period" we're going for. I then turned to the very useful GW tank and heavy weapon sprues. I added a co-axial 20mm cannon (GW autocannon), hull mounted heavy MG (using the GW heavy bolter) and the GW cupola with an MG and search light. 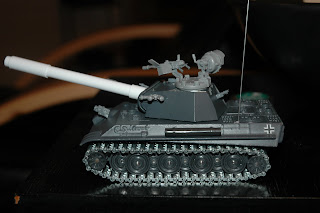 Smoke launchers were placed on the turret, as was a searchlight - a couple of gun sight bits were also dropped on to the turret which I hope that, when painted, will give this a sci-fi look.

Unfortunately, the exhaust pipes at the back were a casualty of the poor hacksaw job - I figured screw them, and just went on without them. I glued a length of piano wire to serve as an antenna, and also cut the end off of a GW lasgun bit and mounted that on the back turret hatch of the Panther to provide a kind of light anti-infantry rear-defence weapon.

The very first Panther Mk 2050 is now waiting to be painted... 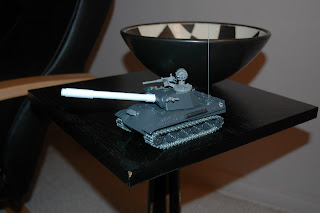 In the end, I have a rather heretical product - a glorious Panther tank, hacked for the purpose of playing a Sci-Fi game! Oh my - what would the up-tight "serious" WW2 gamers make of something like this - using GW components no less! The horror....

Stay tuned for further updates - I hope to have this sucker painted very soon.
Posted by Greg B at 10:58 PM

Thanks for the "ü" advice! I just finished painting it tonight - hope to have a pic or two up tomorrow.