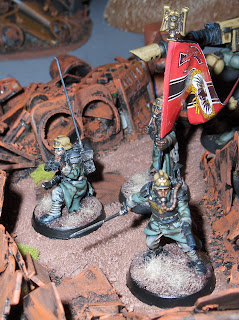 Last Thursday we had another go at the FuturKom vs. GünSchwarm rivalry, with the added bonus of participation from Future Gordon Brown's lads in the form of Mike's FutureBritz. 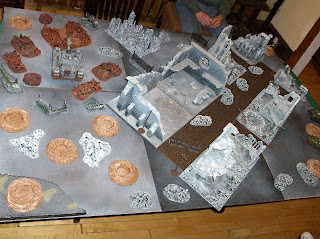 The scenario was rather simple: the setting was 1945, in the ruins of New New Berlin, the remnants of GünSchwarm struggle on. In the finest future-Teutonic tradition, the Schwarm had some new war-winning wonder weapons - the Gepanzert Grenadiere (armoured battlesuits), the manic SchwarmBot, and the focus of the scenario, the super-schwere (or über-heavy, if you like) selbstfahren waffentrager, a giant self-propelled gun hurling projectiles the size of Volkswagens several miles downrange. The FuturKom and FutureBritz had 12 turns to reach the gun and silence it. GünSchwarm's objective was to prevent those victory conditions. Greg and Frederick ran the Schwarm, Mike and Cam took the Britz, and Brian and I controlled the Kom forces. 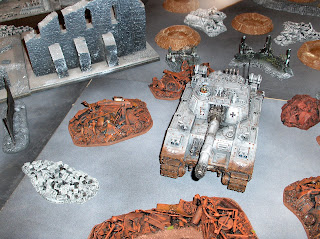 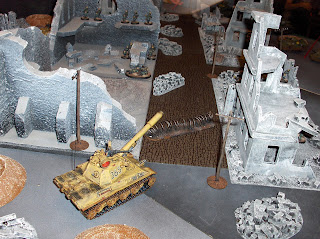 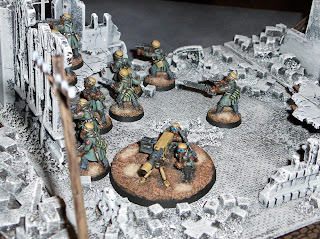 Schwarm digs into the ruins.

The Schwarm dug in several infantry squads, a mortar, the Future Panther, an SP flak gun, the urban annihilator tank, and a recce halftrack, along with four battlesuits. Against this FuturKom threw two recce cars, two T-340 tanks, and a full infantry platoon. The FutureBritz deployed the Future Churchill, Sherman Mk XXV, some infantry, and the fearsome Tesla coil cannon. 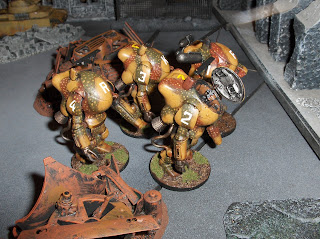 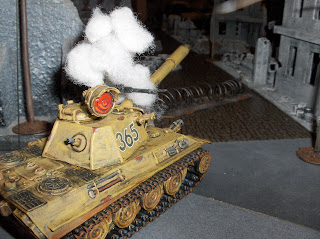 See? KaBOOM!!
The game started well for the Britz as they took out the Panther on the first turn. However this was a somewhat misleading start to their game as they were whittled down almost to a man, only the Tesla surviving. 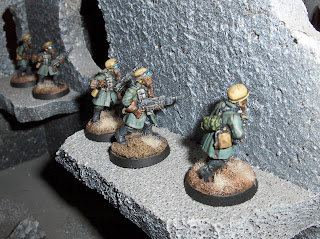 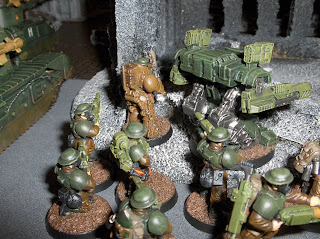 Future Gordon Brown expects every man to do his duty... 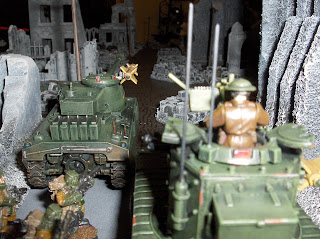 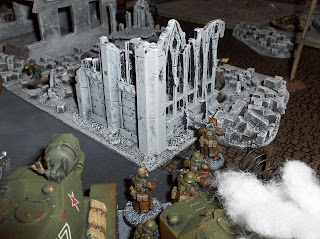 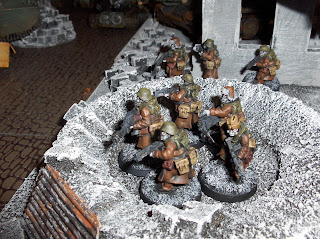 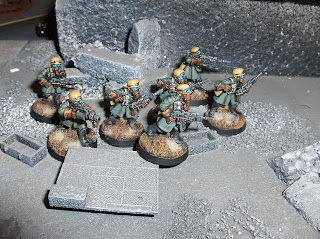 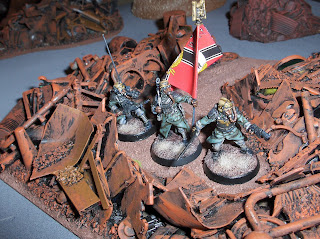 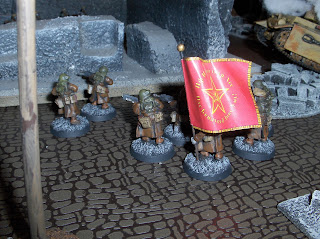 Across the street to certain... victory! 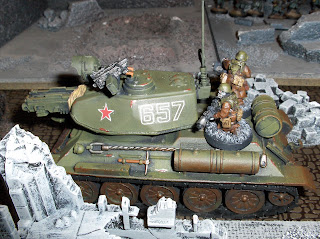 FuturKom fared a bit better, but after a promising start, Frederick ranged in with the mortar and took out the bulk of a squad, with the plasma guns of the battlesuits also doing fearsome damage. One tank and some intrepid riders reached the objective by turn 13 or so, and although by that time the Schwarm was spent, it was too late, as the superheavy's crew had time to finish their bombardment and/or scuttle their vehicle (we hadn't thought that far ahead).

Thanks to Frederick for bringing many of the cool buildings and junkyard piles, they looked awesome. Another fun (and great-looking) game in the twisted future of SpaceKrieg!
Posted by Dallas at 1:50 PM