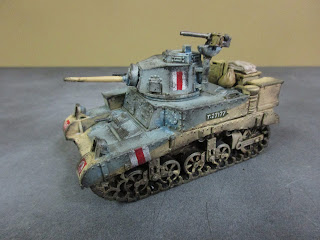 Despite all appearances to the contrary, efforts continue on the Western Desert project. The British infantry platoon is about 2/3 done at this point, one rifleman having been lost in an unfortunate encounter with my Dyson "Animal" vacuum cleaner (NOTE: Perry Miniatures plastic models will always come off second-best against a Dyson). But I've gotten this Stuart Honey finished at least. 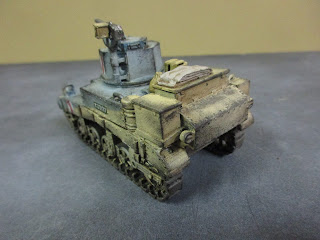 The model is from Blitzkrieg Miniatures, in correct 1/48 scale. As with the other Blitzkrieg models I've encountered, there's a minimum of assembly required. Tracks and hull are one piece, turret and guns make up the other components. Assembly takes literally seconds. Another thing I like about these models is that there's often stowage molded right in. 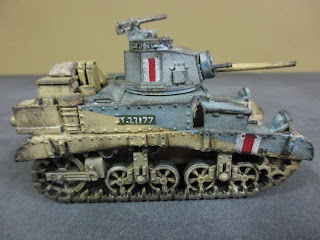 One thing with resin, though, is that you never get decals with the kits. In this case, I just used the "MKI eyeball" and freehanded the markings. Turned out OK, likely because I pick mostly "1s" and "7s" for my serial numbers. There is sometimes a method to my madness. 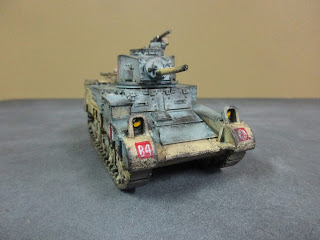 The 7th Armoured Division jerboa ("desert rat") insignia was a different matter. I hope it's somewhat recognizable there on the fender. The Caunter camouflage was too tempting not to try. Base colour is AK Light Earth and the upper blue is GW Celestra Grey with the tiniest ort of Thunderhawk Blue added to it. 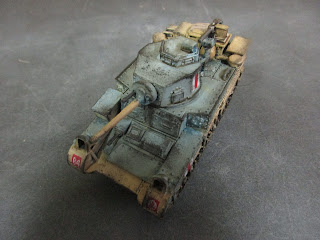 Of course the model was then washed with Agrax Earthshade (please GW never mess with Agrax Earthshade!!) and re-highlighted, then chips were added with a sponge. Done!
I love painting these Western Desert vehicles as you can kind of go to town on the weathering. Any photos you see of these tanks, they're beaten up to within an inch of their lives, but you know that for all the abuse their exteriors get, the crews were hyper-vigilant about mechanical maintenance and repairs. After all, this was their home in the trackless desert and if your home breaks down, you're screwed.
Anyway, hopefully I'll be able to post that infantry platoon next.
Posted by Dallas at 12:00 PM

Great work on this tank Dallas. An iconic piece of kit for the western desert of WW2 for sure.

Also awesome that it is 1/48 scale...I find that the "1/56" effect is particularly awful when it comes to smaller armoured vehicles like this one, so nice to have this one in the "correct" scale :)

Wonderful looking job. I like the sand-beaten look of the hull from the sponge method.

Agrax earthshade, and all the shades are changing this week to a new formula... same color, but the flow agent portion of the wash is "better".

I knew I shouldn't have said anything about messing with Agrax Earthshade. Here's hoping it doesn't get Devlan Mudded. :-|