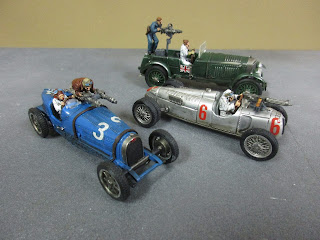 Well, maybe it's a little after the Jazz Age per se, but close enough... Mad Max 1934 is a Gaslands/Car Wars type game set in the Dystopian 1930s, and is played with 1/43 cars and heroic 28mm miniatures. When founding Conscript Curt told me about this game a couple months ago, it sounded like an awesome project to have a go at! So I did! 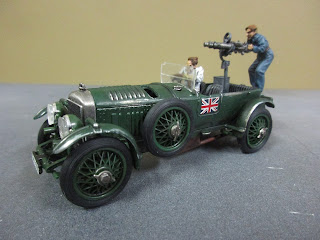 First off, I fired up eBay and ordered some suitable diecast 1/43 model cars from Brumm, then headed over to Eureka to get crew models and bits. First up was this 1928 4 1/2 litre Bentley. I weathered it a bit with some steel wool (made necessary because the plastic hood straps broke and my attempts to glue 'em back on marred the paintwork), followed by an allover wash of Nuln Oil and a targeted wash of Agrax Earthshade over the lower part of the car. I also rusted up the exhaust system. 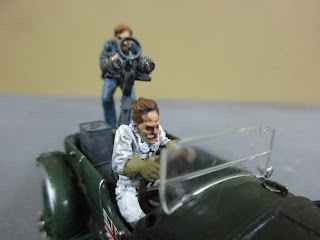 I painted this suitably mad-looking driver from Eureka and secured him in place. The Eureka drivers come with steering wheels so I cut the wheel off the Bentley. 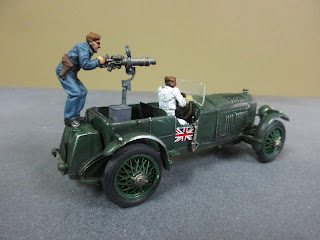 The gunner is from the same pack. I used a gun mount from the Eureka accessories pack and a length of wire to mount it to the car. The "flimsy" petrol can is also from Eureka. 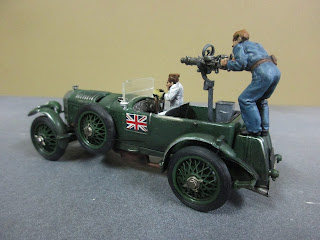 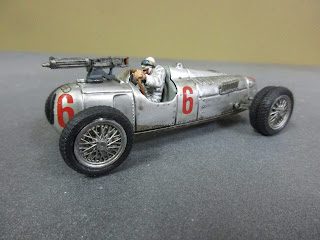 Next up is a 1936 Auto Union Type C Grand Prix car, in dual-wheel "hillclimb" configuration. This was a bit more involved as a conversion because I wanted the model to be displayable without the machinegun as a legit historical racer. What to do? 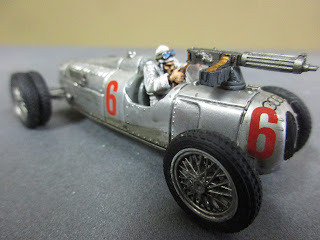 Well, magnets to the rescue of course... I attached an ammo box from the spares bin to the Eureka MG and sculpted the cartridge belt from greenstuff. A 5mm disc magnet was attached to the bottom of the mount before painting. I took the car apart and superglued two more 5mm magnets in series to the underside of the front of the car so the MG magnet would adhere to the outside. Sorted! 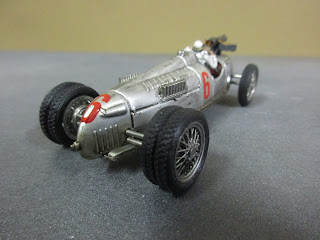 Paintwork was as per Bentley - Nuln wash followed by Agrax. I think it looks suitably road-worn. 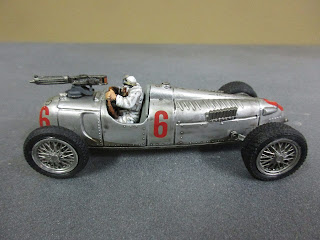 The Auto Union cars were the apex predators of pre-war motor racing... mid-engined like modern race cars, but with antiquated suspension and tire technology... the hillclimb cars needed four rear wheels as those rear tires took so much punishment from the 520 horsepower V16 powertrain they needed to be doubled up. 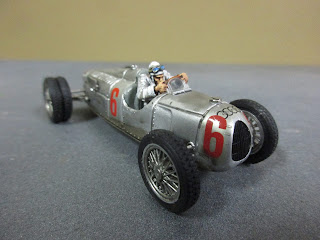 Here's Hans Stuck madly sawing away at the wheel of his Auto Union in the 1938 Deutsches Bergmeisterschaft (German Hill-Climb Championship)... sadly machineguns were not permitted. In any case the cars went up the course one at a time anyway. 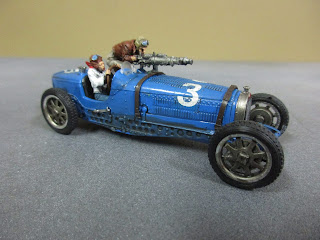 Lastly here's a 1939 Bugatti Type 59 Grand Prix car with a fetching female driver, also from Eureka. Not so successful as a racer, it looks great in French racing blue and brings some heat with twin Lewis guns. 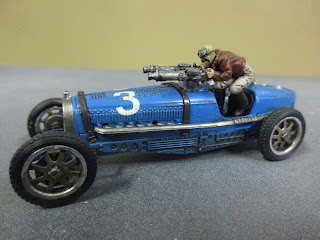 The paintjobs on these Brumm models looked so good I couldn't bear to repaint them, so I used the Nuln/Agrax formula on all three. 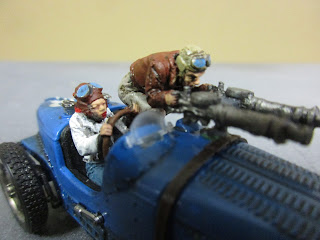 The Lewis guns were mounted to the car via a plasticard cross-piece (connecting the guns) and a short length of wire. I made a small round mount out of greenstuff and stuck that to the car hood, and glued the MG wire mount onto that. 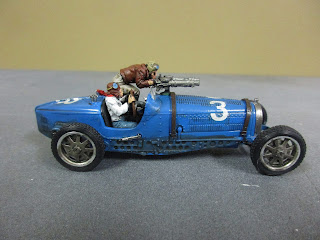 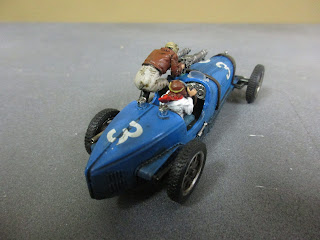 Looking appropriately deadly, no? While I haven't picked up a copy of the MM34 rules, they look pretty fun and I love the setting and working on the models. Hopefully we can give it a go someday but even if not, it was a fun little project and I think the cars turned out nicely.
Posted by Dallas at 9:36 AM

Lovely old school racers Dallas. Love them all, but the Bugati takes the prize for me.

Super cool Dallas, wow...these things immediate evoke the setting, even though one "knows" they did not, as you say, use machineguns in the competitions...

Those look awesome, Dallas! I love the “Mad Scientist” car! —reminds me of an alternate Doc, and Marty, from BACK TO THE FUTURE! 😄👍

I take it you made larger Movement Templates, too…? 🤔

Thanks guys! Kevin - no, these aren't intended for Gaslands - MM1934 is its own ruleset. I think Curt has a copy and he turned me onto the concept - hopefully we'll get to use these cars in a MM1934 game someday.

Gosh, lots of nostalgia for me there! My late father was a big collector of old cars in this scale, had a whole cabinet full of them that I recall admiring as a kid. That blue Bugatti in particular is very familiar. Sadly the collection has mostly been broken up and sold now, but I now wonder whether any of them will end up with a second life on a gaming table somewhere? He'd have loved these :-)