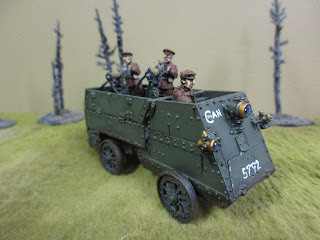 This model had been on my radar for some time as an addition to my Great War Canadian force. The Autocar machine-gun carrier, while ultimately just a footnote in the development of armoured forces in the Great War, was a uniquely Canadian innovation and a neat-looking supplement to a wargames army. 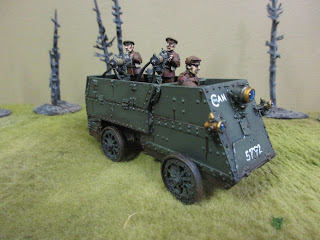 Raymond Brutinel, the architect of the Armoured Autocar (and incidentally, one of the main drivers and tacticians of Canada's machine gun service) was an ex-French Army lieutenant who emigrated to Canada and made a fortune in mining stocks. He kept up an interest in military affairs, too - particularly as related to the machine gun. On the outbreak of the Great War, Brutinel contacted Sir Clifford Sifton, a wealthy Ottawa businessman who served as a cabinet minister in Laurier's government, to put forward his idea of creating a force of machine-gun-armed armoured vehicles. Sifton thought this was a capital plan indeed and resolved to raise the money to create this unit for Canada's armed forces. 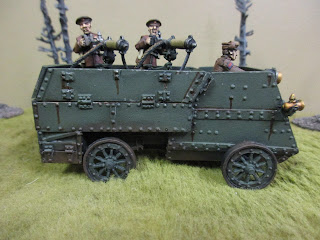 Sam Hughes, Minister of Militia and Defence, approved the plan on 13 August 1914 (!) and Brutinel decamped for the USA to find appropriate vehicles. These he found in New York City, in the form of two-ton trucks manufactured by the Autocar concern in Pennsylvania, and used by the American Express company as transport vehicles. The large sum of money contributed by Canadian business benefactors ($150,000) allowed Brutinel to contract with Autocar for eight armoured machine gun carriers, five support vehicles for carrying ammunition and supplies, a fuel and oil tender, and four unarmoured "roadsters" for officer use. Autocar itself contributed an ambulance. 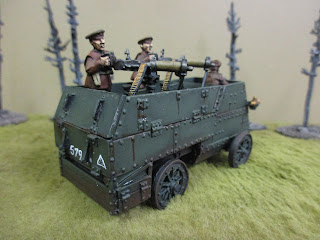 Brutinel then contracted with the Colt Firearms Company of Hartford, Connecticut for twenty Colt Model 1914 machine guns and accessories - sixteen to mount on the Autocars and four spares. While the Colt was a poor weapon, the superior Vickers gun was in short supply at the time. However, by 1918 the Colts had all been supplanted by water-cooled Vickers guns as shown on my model. 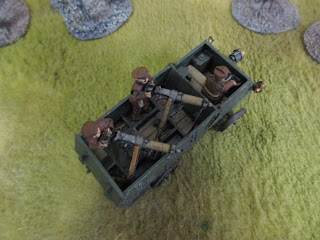 The fully equipped Autocar weighed three tons and was powered by a 22hp flat-twin water-cooled engine mounted under the driver. Top speed was 15mph. The armour plating was a mere 5mm thick and hardly bulletproof, despite the representations of the Autocar firm. The two machine guns were mounted along the centre of the rear compartment, and bins along the periphery carried 12,000 rounds of ammunition. 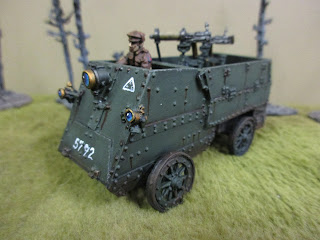 Its service history was somewhat mixed. By the time the 1st Canadian Motor Machine Gun Brigade reached the Ypres salient in June 1915, terrain conditions were not conducive to vehicles at the front lines. Brutinel changed tack and innovated a new role for his machine guns - indirect barrage fire. In this he was quite successful and eventually, he was appointed to Corps Machine Gun Officer, having control of all heavy machine guns in the Canadian Corps. 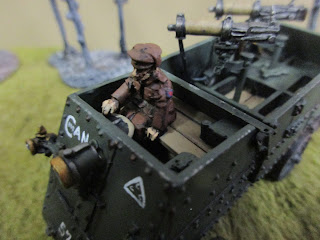 By January 1918 Brutinel considered the Autocars obsolete and Sir Arthur Currie, Corps commander, endorsed his proposal to remove their armour and relegate them to a transport role. But before that could be done, the Germans launched the Kaiserschlacht offensives and the Autocars did yeoman service in zipping here and there to support the hard-pressed British troops. This brought a reappraisal of the value of the Autocars in "mobile warfare", and the unit served admirably in the Hundred Days campaign that ended the war. Four of the armoured Autocars survived the war. Two were returned to Canada in 1919 for possible use in quelling civil disturbances such as the Winnipeg General Strike. One of these disappeared after being sent to Winnipeg. The other was eventually used as a training vehicle for a time, and ultimately accessioned into the collection of the Canadian War Museum in Ottawa, where it can be seen today. 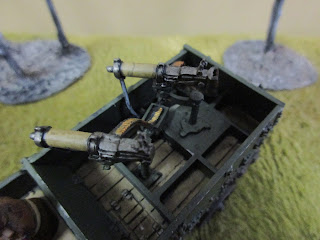 I quite enjoyed building and painting this model from 1st Corps, although the customer service I received was pretty poor. At first, there was no acknowledgement of my order - just an email from Paypal confirming my payment. After ten days or so I sent messages with no response - eventually I got a "yeah it's been sent" message through Facebook. However, when the order arrived, it didn't include the crew models shown on the 1st Corps site - instead of the standing crew member, I got a second gunner. Emails and Facebook messages asking about this discrepancy have not received a response. So - great models, lousy service. Disappointing, because I think a previous order of some Curteys Miniatures knights from them had come through fine. Oh well.

As noted, the model is great - resin body with metal guns, ammo boxes, coolant canisters, and wheels. The driver is cast in metal as one piece with his bench which makes for easy painting access to the cab. There are a couple of armour plates in resin too but despite there being no instructions included, assembly is easy enough to figure out from reference photos. 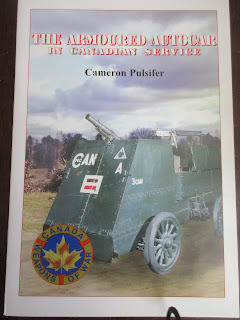 This 24-page book is an invaluable resource for information on, and many photos of, the Autocar. It's available from Service Publications for only $10CAD. Highly recommended.
Posted by Dallas at 11:33 AM

Great work Dallas. Sucks that the service from 1st Corps was that crappy, but the vehicle looks cool in the end - what a neat addition to the collection.

That looks totally awesome. A nice addition to an early or late war scenario involving Brutinel's Canadian Automobile Machine Gun Brigade. Somewhere I have some pics I took of the surviving car in the Canadian War Museum.

Thanks guys - yes, I end up taking pics of the Autocar everytime I'm at the Museum too!