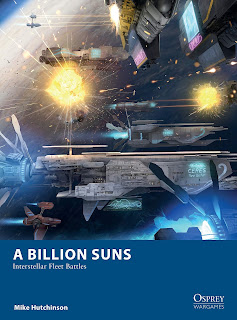 A few months back Osprey released another set of wargame rules called A Billion Suns. It was by the same guy who did Gaslands (Mike Hutchinson) and promised to be a spaceship fleet battle game. I eagerly pre-ordered it and was quite excited when it arrived. The excitement dropped a bit as I started reading the rules and realized it wasn't "really" a fleet combat game. The game is model agnostic which is nice, but the object of the game isn't necessarily about combating the fleets of other players. In the game each player represents a corporation (it's like our species has an instinctual fear of future corporate power). Each corporation competes to complete various contracts using the fewest ship resources as possible. The contracts are actually more like bounties, which is a bit strange for some of the missions. There's no tender process in the game univers, a job is simply paid to anyone who completes the terms. This makes sense for contracts involving destroying rival corporate assets, but why would you pay a bounty for an escort or evacuation missions? Wouldn't you want everyone to cooperate to get the job done? If you want a rival corporation’s communication satellites hacked to steal their data, why would you want multiple factions competing to complete the job? Wouldn't you want as few people involved as possible? Anyway the game needs to happen, so don't think about it too much. In terms of game play, the contract system encourages players to use the least number of the smallest ships available. Ships like battleships are prohibitively expensive and likely won't see much game play in small games. This is a disappointment for fans of Full Thrust or Battle fleet Gothic who want to see big ships duke it out. This isn't to say that the rules are bad or the game isn’t fun, it's just different from my initial assumptions. Folks on YouTube speak highly of the game, so I persevered and tried to learn how to play. One thing that struck me is that the contracts require players to have a fair amount of "stuff" to represent freighters, satellites, space stations and other things for your ships to interact with. The game can scale to any size, but small games will only see players deploy fighters or frigates. If you want to use large capital ships, you need to play a bigger game to justify the expense. This then requires you to buy more "stuff" to represent the extra contracts. This is something I could see GW designing! I have lots of warships in my collection, but none of the non-combat assets needed for a game. Luckily, there are several companies on Etsy that make resin and 3d printed components for the game. I ended up getting some space stations and tokens from Etsy as well as some utility ships and satellites from Brigade Models. The paint jobs aren't fancy because these are really just glorified objective markers. Hopefully I can put on a game, though the list of games we would like to play is quite long already. 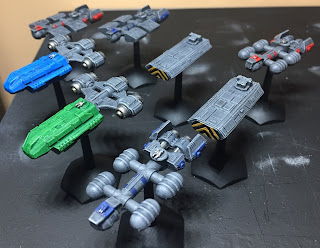 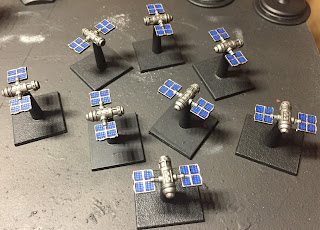 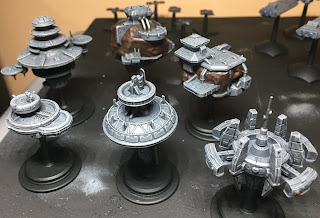 Thanks for visiting!
Posted by MFraser at 12:57 PM

yes, I prefer great big fleets slogging it out with grand old dreadnoughts pounding rebels to dust......I remember reading the brief for the game and thought about pre order myself but decided to wait and see.

I picked up these rules, too. I will have to look for more sci fi tabletop elements.

I picked up a copy of these rules, hoping to adapt them to other uses - the ships from "Star Wars: Armada", for example. But these rules were disappointing...it is very difficult to disentangle the odd specifics of the pseudo-corporate setting from the core mechanics of the game. May work for some people - and if you like the setting, I think you will like the rules (although the notion of playing on multiple tables is overrated) but if you are looking for an alternate to use Star Wars ships, or GW's "Battlefleet Gothic" ships, these rules will not work well.

Good review Mike, I'd been looking at this for awhile - you made up my mind for me :-)