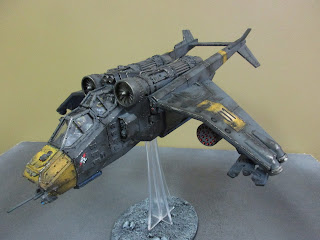 Well, this week I got REALLY motivated and finished off two models that had been hanging around the painting desk half-finished for literally years. 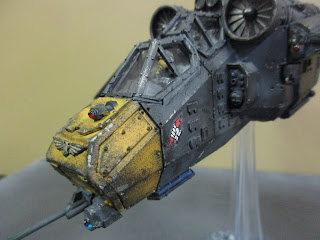 The first one was a rehab Valkyrie that I'd picked up from somewhere long-forgotten. It was assembled and I think it may have been missing some cockpit parts, and I definitely added the rod to replace the broken pitot tube. 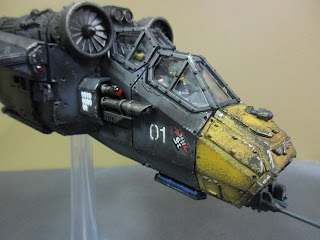 You can see that it had a coat of some kind of paint on it before (primer maybe?) but I know I'd bought it with the intention of rehabbing it for my Chaos Renegades. 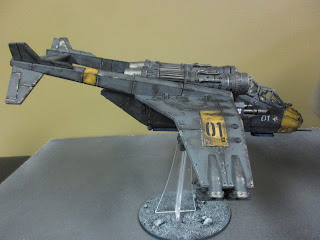 Once I got cracking, it was a pretty straightforward job. Base of Mechanicus Standard Grey, with Averland Sunset as the contrasting colour, then weathered with Nuln Oil wash and sponge-chipping, and a bit of craft black drybrush soot. The underside was basecoated XV-88 and panel-highlighted with Hoeth Blue. It was a bit bright but looks OK after Nuln Oil and chipping. 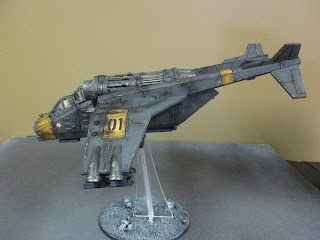 This aircraft should do well in our ongoing 40K games. I have very few flyers in my armies but after seeing what Greg's Valk-spam can accomplish I felt it prudent to get at least one for the Renegades! 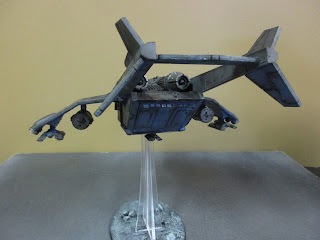 You can see a bit of the underside paintwork here. Unfortunately the previous owner assembled the model all buttoned up so no interior detail except the cockpit. 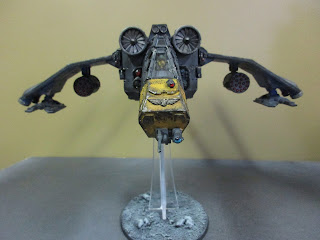 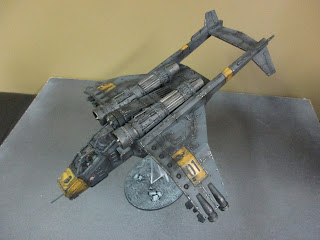 This was a fun model to paint. The marking scheme was copied off a model I found on another hobbyist's blog. I thought the yellow panels looked great, so cheers mate! :-) 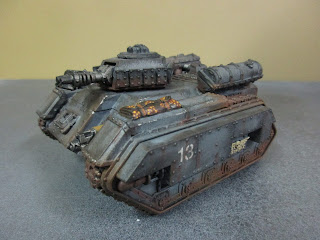 Today being Sunday, I thought I'd continue the Renegade theme by finishing another model that's languished in basecoat for a couple of years - this Hellhound. It's the older version, with cast metal turret and detail parts. 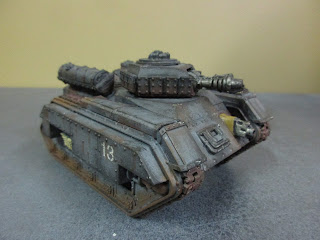 It's also painted in MSG, but brightened up slightly with an MSG-Celestra Grey mix. Nuln Oil, then chipping and rust (powder mixed with water) followed by a Mournfang Brown drybrush around the dirty bits. 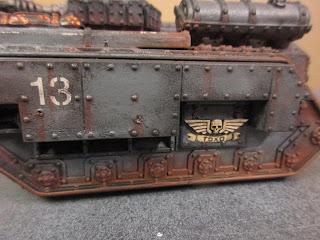 Shout out to our old friends on Toxo IV! 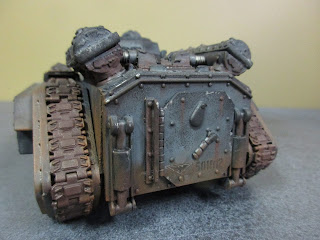 I love the Imperial "number plate" decals from the Baneblade transfer sheet, and use them wherever I can. 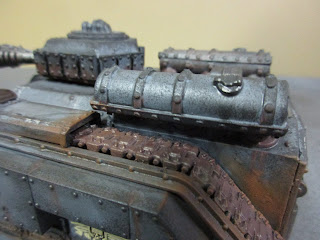 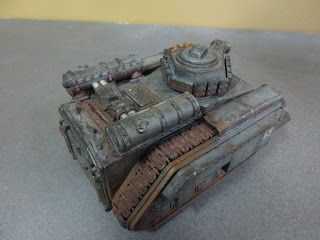 Tracks were basecoated Leadbelcher and weathered with the rust powder-water mix. 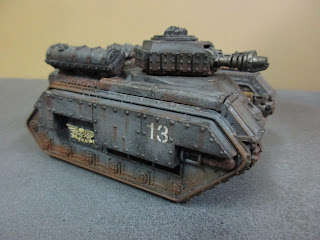 Lucky 13! Good to get this one off the painting desk and into the cabinet as well. Unfortunately, there's plenty more models hanging around the desk where this came from. But that's what quiet Sunday afternoons are for, I guess!

We like very much the 40K models and make them great!
Bravo!
😎

Nicely done. A couple of veteran looking vehicles there.

Brilliant stuff Dallas, really good. I've seen that Valkyrie sitting on your painting desk for some time, so congrats!

Now we need to get it shot down in a game soon...

Thanks guys! Yes, it'd be great to get the Renegades out soon. Just need to figure out some rules for the Bomb Rats eh?

Brilliant work, Dal. The weathering on that Valkyrie is spectacular - amazing stuff dude.

So much grime - these look very well used (and abused). Love it!

I love the feeling of satisfaction at finishing off stuff that's been lurking around the edges of the painting table for far too long. It's amazing how these things can weigh you down - and you don't even realize it until you finish it off... at least, that how I feel..