With our normal host Dallas busy with work last week, Greg and I decided that it was time to further amortize my 6mm Napoleonic forces with another game.   Since it has been a while since the last game, we decided a small battle would be appropriate so we were not struggling with the rules too much in a large game.

Greg being the history buff pulled a gem out of his hat with with The Battle of Teugen-Hausen.  The battle was between the Austrians and French in April of 1809 and focused on some historical issues that were common throughout the period:  French aggressiveness bordering on over confidence and Austria's poor leadership and indecisiveness.  Both played out well in this battle.

We used the Fast Play Grande Armee rules, which have several very flavorful features that played out in this game.  To recreate the leaders involved in the battle we assigned 1 command die to the Austrians and 2 to the French.  Davout was a +2 leader, and his officers were +1, while Hohenzollern was +1 and his officers were 0's. 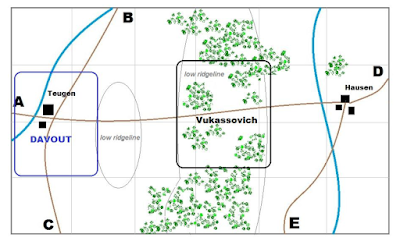 A brief historical overview:  In mid-April Davout moved his corps southeast, attempting to link up with his Bavarian allies. Dense woods and rugged terrain limited the scouting, so it was with some surprise that French and Austrian units made contact on April 19. An Austrian corps under Prince Friedrich of Hohenzollern stumbled upon Davout, and the Austrian commander sent word to Archduke Charles that he had found the French. Hohenzollern requested the support of the IV Corps, as well as the archduke's grenadier reserve corps. 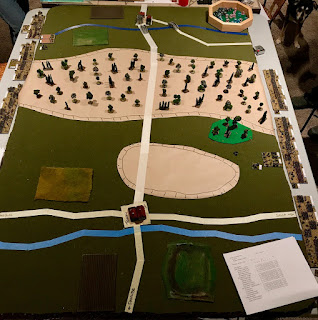 The French started with Davout and Saint-Hilaire's Division on the table near Teugen.  Mean while the Austrians started with Hohenzollern cozy and settled in Hausen with Vukassovich's division forward in the woods.  To win the French needed to either break the Austrians or get troops over the stream into Hausen or off the table via point E.  The Austrians had to either break the French or hold them achieving their objectives.  The game would last 6 turns. 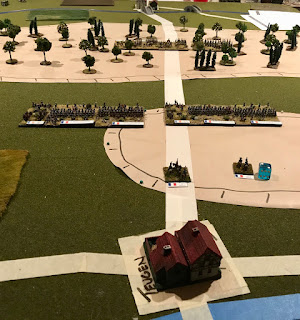 The French started by moving forward in their first pulse of turn 1 (FPGA plays out over turns and pulses, each turn being between 1 and 4 pulses) towards the woods.  The Austrians played cagey and pulled back in the woods.  This continued for the entire first turn as the Austrians were not keen on fighting it out alone. 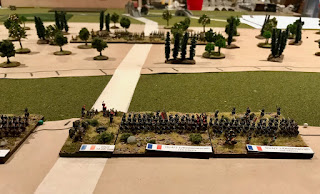 Turn two saw more action start to get underway as both the French and the Austrians got re-reinforcements to join the battle. 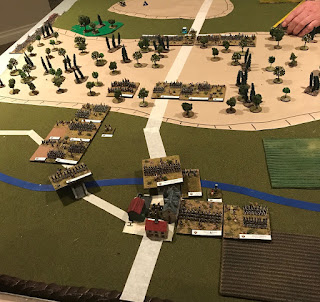 The Austrians had two divisions show up to help.  On the first pulse of turn 2, St. Julien's division moved up into the town to cross the stream and join the battle forming in the woods, which Lusignan's division went left of the town to stop the French from reaching point E (one of the French's victory conditions).  The French moved Friant's division up from point B towards the woods to help break through. 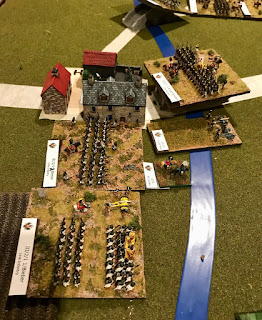 Here is where things went badly for the Austrians, but fittingly so historically.  St. Julien once in the town, refused to leave!  FPGA works with a friction system using dice to determine what you can actually do with each division.  Ideally you want between 7+10 on two dice and you can do whatever you want, good commanders give you a +1 to help get into that range, and good Army leaders give you bonus dice to use so that you can roll up to 2 additional dice and pick any 2 of the 4 you want to get the numbers you need.  However, the Austrians lacked extra dice to assign and had to roll 2 dice only for 4 pulses over 2 turns, and had St. Juliens division sit in the town taking violin lessons or something, then retreat for some unknown reason (maybe to avoid paying a bar tab?) before finally moving through the town a full 2 turns later! Meanwhile in the center of the table, the French force advanced into the Austrian line and combat started. 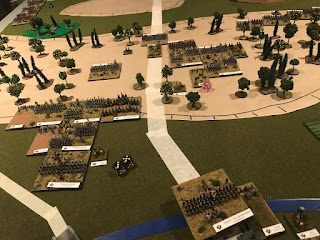 Over the next several pulses and turns, the combat raged back and forth in the woods.  Units made contact, shots were fired, attackers were forced back.  However, nothing really significant took place.  There were very few casualties as combat in the woods required 6's to hit, and neither side could roll more than 1 in a combat.  The French got an additional division of reinforcements on turn 3 that came in from point C and started making moves straight across the table to point E. 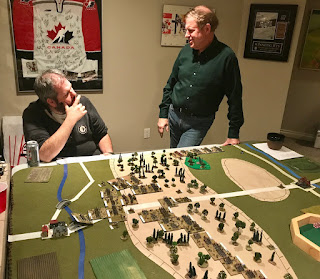 Turn 4 arrived, and the Austrians had finally setup a solid defensive line and were prepared to attack.  They also were begging the Duke for his grenadier reserves to hold the line and push back the French, but he remained indecisive about committing his finest men. 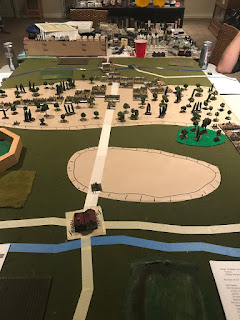 The Austrians launched an attack, or tried to...  Once again their poor command structure let them down on one flank where they attacked and pushed back the French in pulse 1, then suddenly decided to retreat!  In the center they decided to hold instead of pushing forward when they had an advantage.  The minor fighting continued though as the French launched an assault, only to be pushed back once again. 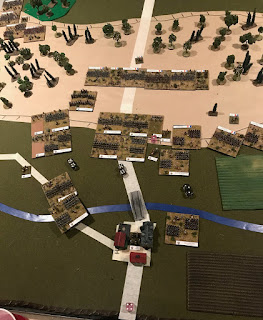 The time spent delaying on the Austrian side favoured the French, as their command structure was not so indecisive and instead of being concerned that things might not be perfect, pushed forward aggressively.  Friant's division moved straight past the conflict in the woods in an attempt to flank the Austrian force and push through to the town. Turn 5 once again saw the Archduke refuse to release the Austrian Grenadiers which were sorely needed at this point. 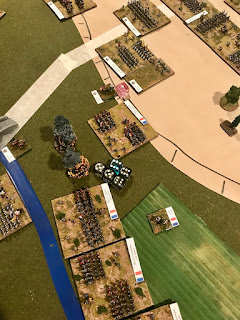 After so may combats in the game were only 1 point of damage would be caused, the French hammered into the Austrians and caused a stunning 5 points in one go, annihilating a stand in one combat.  This also set them up to cross the stream and win the game. 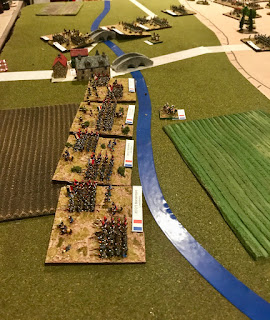 The Austrians had one last go at the French, trying to push them back with a lone cavalry charge, since YET AGAIN the Archduke refused to acknowledge that his Grenadiers were actually required.  The attack had no hope of success and was only done so that St. Julien would not have to face the music from the Archduke for having lost the battle (or pay that bar tab from earlier).

The outcome while demoralizing to the Austrians was historically accurate.  The poor leadership on the Austrian side had cost them what could have been an easy victory several times throughout the battle.  The French had very few command failures and pushed through to their objectives.  The French did loose a few units while pushing through the woods, but not enough to cause serious concerns.  There were more times than described in the battle report that the Austrians had something lined up, then failed to act on it due to poor command rolls.  They would either fail entirely and have to hold, or worse fall back for no bloody reason at all, right after inflicting wounds on French units!

Overall the game was really enjoyed by everyone and once again proved that we really need to play more Napoleonic games as no matter the outcome they are always fun.

That was a great game guys - was a lot of fun to see Napoleonic troops in action on the table once again! The FPGA system is lovely, not too taxing on the brain but still giving a great feel for command challenges.

I still feel bad for that Austrian brigade that was savaged near the river and the village...five hits - ouch! Such was the ferocity of the French in that era...it was a lucky product of a die-roll, but it seemed appropriate...

For the first few turns the French couldn't roll a six to save their souls. Every attack on the Austrian defenders in the forest was being bounced back with slow but steady losses. It was finally nice to get a little revenge and destroy an Austrian unit in a single attack.

Great game guys! FPGA always does the trick. If you ever want to try something similar, try his 'Blucher' as it has many of the same mechanics but streamlined even further.

I love seeing those figures getting some love. :)