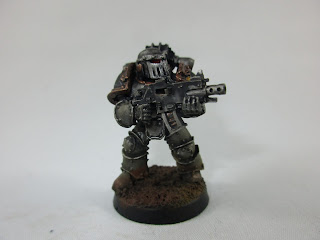 Well, it's safe to say that around these parts, between the Betrayal at Calth boxed set frenzy and general Forgeworld crack addictions, the Horus Heresy is raging on. So it is therefore perfectly sensible for me, despite having armies of 40K Black Templars, Rogue Trader Howling Griffons, and Heresy-era Blood Drinkers/Angels, (plus Deathwing and Plague Marines too) to start another Space Marine army. 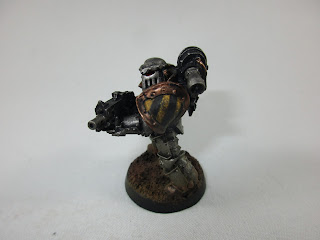 Step forward the Iron Warriors! The fourth Space Marine Legion to be raised in the First Founding; cold, calculating weaponsmiths; siege and heavy weapon specialists; and legendary all-around hard nuts, the Iron Warriors have a lot going for them as a Traitor Legion choice for Heresy-era gaming.  Not to mention that, as long as you like hazard stripes, the paint scheme is absurdly simple, fast-painting and awesome looking! 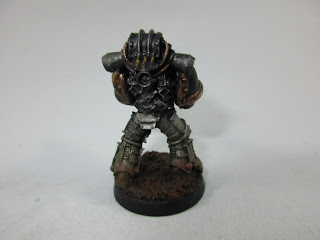 So I've taken the plunge into "the narrative of hope and change" as Conscript Greg would say, and have started collecting and painting a IV Legion force for our Heresy games. First up were some test models - a MKIII Space Marine from Forgeworld (seen here) and a MKIV armour from the Calth boxset (farther below). 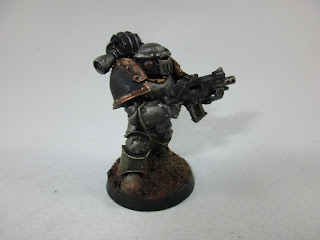 I am a huge fan of the MKIII armour. It has a brutalist aesthetic that to me, just captures the Horus Heresy so well. The model was primed black and painted GW Leadbelcher, with gold bits picked out in Balthasar Gold. Hazard striping was done with Averland Sunset highlighted with Yriel Yellow. The whole model was washed with Nuln Oil, and the gold bits washed again with Agrax Earthshade, then highlighted with Leadbelcher and Balthasar. Some chipping with black over the yellow and light powders finished it off. 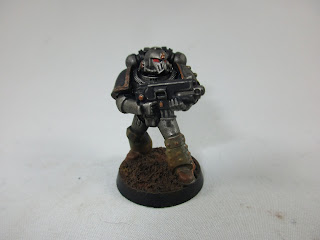 Although I have to admit that the MKIV suit isn't my favourite-ever Space Marine armour, the models from the Calth box are awesome nonetheless. This one assembled very quickly and accurately and looks great. 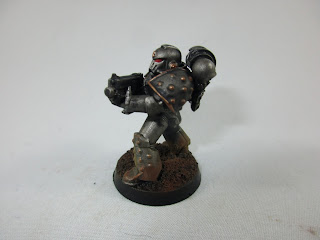 I painted him using the same technique as the MKIII. 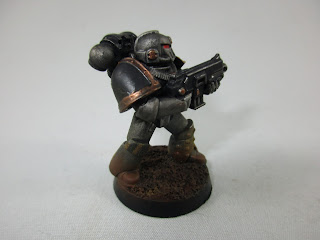 His right shoulder pad is also left blank for application of some IV Legion insignia later.

I have two Calth boxes and five MKIII suits for a command squad, so that should pretty much do me for Marines. I reckon 30-40 Tactical Squad Marines and 10 Iron Havocs with lascannons, and perhaps a 10-man Tac Support squad or even Assault Squad made with Forgeworld accessory goodies. Ten Cataphractii Terminators of course, done up as Siege Tyrants with added missile racks, likely from some third party vendor. There's two Contemptor Dreadnoughts in those boxes too, along with an Iron Warriors body on the way. I have some Praetors about that could go Iron, as well as a MKII Command set with banner and leader-type coming. Vehicle support will be sparse but powerful to start with anyway, as I've ordered up a Legion Medusa (hopefully a better kit than the Armageddon pattern vehicle) and the irresistible Typhon heavy siege tank for some serious line-breaking.

Great stuff Dallas - the Iron Warriors are a fantastic choice, and I know the Warmaster will be pleased to have them on the table as they brush away the dupes of the so-called "Emperor". Horus for Hope!

I read one of the GW novels on the iron warriors, must admit they are my favorites!