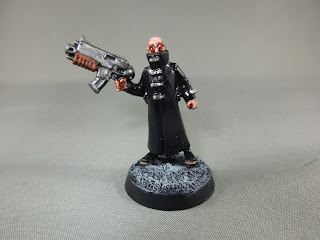 As readers know, Conscript Dave has organized a Necromunda campaign that's now in full swing. While I already had a ton of painted Cawdor/Redemptionist gangers, a campaign always provides a nice impetus for a new painting project.

As far as Necromunda factions, I always thought that the Delaques were super cool, what with their trenchcoats, shaved heads and John Lennon glasses. However, when I looked into getting the GW models, I got a bit of a shock... prices have increased quite a bit on that OOP stuff. So I looked around for some alternative models, and found these: the "Slicks" from East Riding Miniatures in the UK. 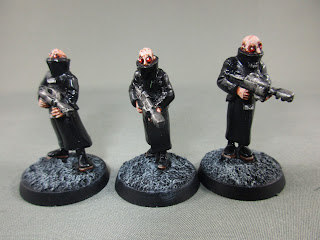 ERM actually sell a pack of all 7 variants of Slick for the low price of 7 English pounds. A veritable bargain compared to Delaques from GW that might exceed that amount for a single figure!

The Slicks are cool, but I did do a bit of conversion work to make them my own. For the gangers above, I added extended barrels and flash suppressors to their autoguns. 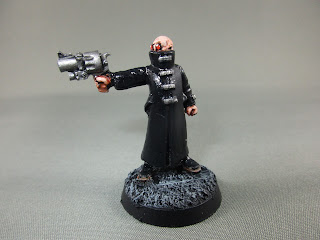 The juves in the gang are equipped with pistols, of course. The ones provided by ERM are rather weedy and lacking in detail, so I swapped in some more impressive shootin' irons for them as well. 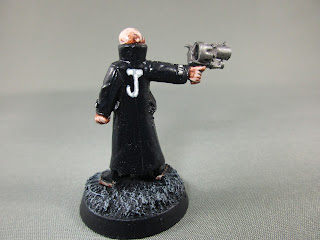 Juves are identified in this gang by the large probational "J" on the backs of their coats. Once they're promoted to full ganger status they'll be entitled to wear the plain black PVC version. 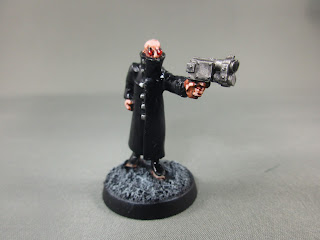 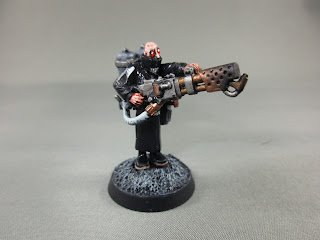 For the "heavy" with flamer, some more extensive conversion was required. Both of his arms were cut off (!) and arms from the GW Astra Militarum heavy flamer model were grafted on. I think it turned out rather well. 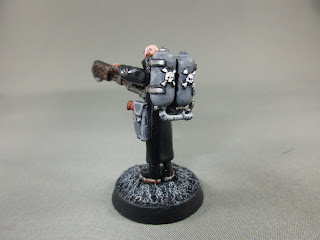 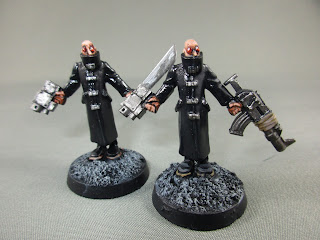 This is the base model for the flamer conversion above, which I also use for juves. Again, weapon swaps are done with GW weapons. The fellow on the right is a new recruit to the gang; he joined to seek revenge for the death of his brother (a full-fledged ganger) who was killed by Spyrers in the first campaign game. He carries his late brother's autogun even though he's not able to use it! 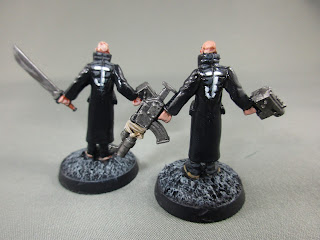 I kept the painting very simple for the gang, both because I needed to get them into action in short order and because I'm lazy ;-)

Flesh was painted a bit lighter than my normal mix, with a slight reddish undertone cast achieved with a wash of diluted Chestnut Ink. The PVC trenchcoats have Leadbelcher hardware washed with Nuln Oil, and highlighted with Leadbelcher and Mithril Silver. Weapons are done with Leadbelcher/Nuln Oil as well. Finally the coat and eyepiece lenses are given a generous brushing of GW 'Ardcoat (gloss varnish). 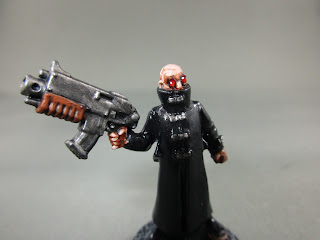 The gang leader, Slick Plashkin (each gang member has some not-so-clever punning name - Slick Derringer, Slick Astley, etc.). He carries a boltgun that he's used to good effect in the first two games.

These guys have been quite fun to play with so far and my only regret is that I didn't buy more - I might need to hire more gangers. Oh well, ERM's still in business and the postage charge wasn't outrageous. They also have some other cool stuff that can bulk out an order...


So many thanks to Dave for providing the impetus for this fun project. It turns out that the boys are doing OK on the tabletop as well so that's always a bonus!
Posted by Dallas at 9:32 AM

I liked these castings so much I got some for myself!

They look real nice! And creapy with those red eyes!

Necromunda though, without lasguns/shotguns, and a heavy stubber?

Thanks fellas! Lasgun, you'd have been impressed with the flamer in game 2 of the campaign, where Slick Devlan Mudd (that's his name) roasted a Spyrer to get an out of action gong AND fulfill an extra VP for the scenario!

Nice figures, they come across well. Flames are always fun in Necro, and hand flamers most annoying! How did you do your basing? Simple but nice!

Ha, those juvie jackets remind me of British "Learner" signs on cars... Means "give this one lots and lots of space".

Ragsta, the basing method is simplicity itself. I use an artists' product called "texture gel medium" - I think the brand is "Golden" and variety "coarse". Superglue model to base and slather on the gel, it dries overnight, I spray undercoat black and drybrush it up with lighter grey tones. Works OK for both rural and urban/underhive environs.