For several years now Curt has been including various bonus theme categories during his Analogue Hobbies Painting Challenge.  Participation is not mandatory, and the interpretations of the themes are often quite elastic, but in general this has lead to some extremely creative submissions.  Plus you get bonus points!

Many of the Challenge participants are top-shelf painters, and skilled at creating incredible vignettes.  I am not one of those Challengers, and so I have tended to ignore the bonus themes unless they coincidentally lined up with something on my pending desk.

But, as Curt had said to me once in an unrelated conversation, "This is a painting challenge, after all..." so this year I have been trying to stick with it.  This latest theme, I wasn't so sure I would make it, however.  The theme was "l'amour".  As the submission date fell on Valentine's day, the theme made sense, but I had no idea what figures to paint. Given that I am busy with 15mm Team Yankee and stuff, I didn't exactly have anything underway I thought would work, even under the "goblin spider precedent".

But I have tons of stuff lying around the in the lead pile. A quick rummage turned up these two figures. I thought they might be some kind of Victorian couple, or perhaps interpreted that way.  These are two figures from Wargames Foundy's "Darkest Africa" range. 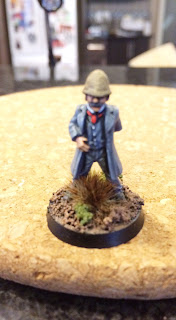 For fun, I submitted that the scene in question is all about the photo caption...so I just goofed around with the captions, in lieu of coming up with some kind of amazing vignette.  These figures don't have much immediate wargame impact, but they would/could be useful in a pulp game, or as characters in some kind of colonial encounter.

So, another theme round managed! There are two more theme rounds left (in fact, the end of the Challenge is coming quickly - I hope that means spring will be here shortly as well).  I'm scraping towards my 1,000-point target, although I'm getting murdered in my side-duels...should be a fun race to the finish!
Posted by Greg B at 8:00 AM

The coolest couple ever... ;) Fine miniatures, so lovely painted!