My eighth Analogue Hobbies Painting Challenge entry is a squad of "good guys" for 30k Horus Heresy - a squad of ten Space Marines from the XIX Legion, known as the "Raven Guard".  The models are 28mm, new multi-part plastics from GW's "Betrayal at Calth" box set, but the embossed logo shoulder pads are from Forge World. The Marines are wearing Mark IV power armour. 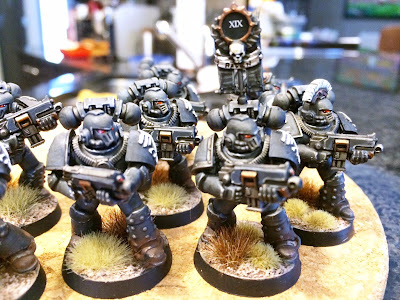 To date I have been painting the followers of Horus in 28mm - believers in "Horus for Hope" :) These are the first "good guys" I have painted for this setting and this scale.  Dallas has been carrying the Loyalist side in our gaming group, with a beautiful collection of Marines from the Blood Angels.  And, of course, the setting is very malleable, so you can even have the Sons of Horus, World Eaters, Death Guard and others fighting among themselves, representing the early stages of the fighting as Horus and his followers removed the loyalists from their own ranks on the world of Istvaan III.
I'm a certified 30k nut, and I thought it would be fun to do some Loyalist troops as well. I just wasn't sure which legion to try.  The Salamanders? I'm already painting enough green guys. The Iron Hands? Too weird.  The Blood Angels? Cool, but Dallas already has them covered.  The Imperial Fists? Very, very cool, but man...yellow is hard to paint in 28mm...(more on that later).  The Ultramarines? Blue is a cool colour, but they are so lame...they kinda had what happened at Calth coming to them.  The White Scars? I'm already painting enough fellows in white armour.  The Dark Angels? Meh.  And the Space Wolves? LOL.

(Note - smug Legion opinions are entirely subjective, with no real logic behind them - YMMV.  Surely someone out there is doing an awesome job painting up super cool Ultramarines...)

So how about the Raven Guard? Well, neat Legion. Nice back story without excessive emo drama or imaginary self-pity. Cool logo. Funky special troops. The roman numeral - XIX - has a nice look. The name "Raven Guard" opens the possibility of Edgar Allan Poe references. We might be on to something here...

But the Raven Guard get kind of a raw deal in the story - their Legion (along with the Salamanders and the Iron Hands) get caught in a battle known as the "drop site massacre", slaughtered in a trap set by Horus and his followers on the world of Istvaan V.


This kind of deterred me.  After all, "Who wants to play drop site massacre? That should be fun!"  But as I read into their background, the story grew on me. While the Legion took huge losses in the drop site incident, several thousand troops survived. I can imagine they would be pretty pissed about what happened, and keen to keep on fighting, making for some good potential scenarios!
While most references have the Raven Guard in black armour, I thought I would do them in a very dark grey instead, with a black shoulder plate and a stark, white Legion symbol.  I got this idea from the Forge World guys - they painted up one of the Raven Guard dreadnoughts on their web site in this way. I'm pleased with how it turned out, and I like it a whole lot more than trying to paint so much black!

The plastics from the Betrayal at Calth box set are very well done, providing the basis for a solid starting force of these fellows.  I hope to add quite a few more before this Painting Challenge is concluded.  Ten 28mm troops will get me 50 points for my sci-fi and Horus Heresy side duels...not enough, but starting to catch up!
Posted by Greg B at 10:43 AM

I also got the Calth set. It's a way for me to do a few 30K units and participate more fully in the Conscripts' 30K games, and still have a board game to play. Need to get an autocannon for the Cataphracts...

They look great.The dark grey colouring works for me

any chance you could tell me what you used for the dark grey, i would love to replicate your scheme