Last week I had a notion to play a game with a winter theme, so I imposed upon Conscript Greg to run a Chain of Command Eastern Front game on a wintry table. He obliged with a game using the "Big Chain of Command" (Big CoC?) variant.

The scenario was pretty straightforward - the Germans are being pressed back and need to relieve pressure, so a counterattack has been ordered. The German attackers need to seize the crossroads (pictured above at the centre of the table) and the Russians must stop them and keep the general offensive rolling. 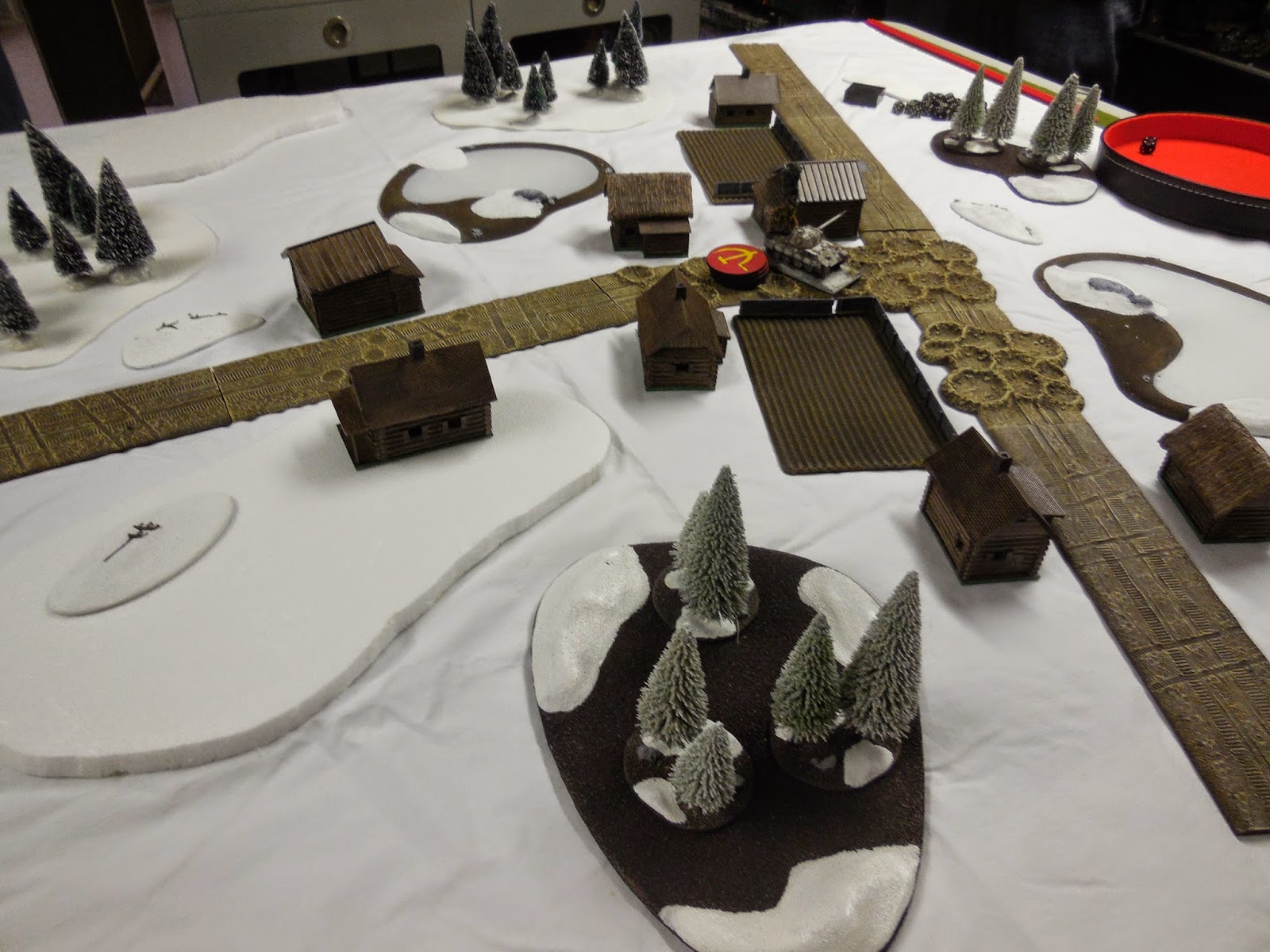 Here's the objective, surrounded by a small farming village, woods, snowdrifts and a couple of icy ponds. And a knocked out Panther. 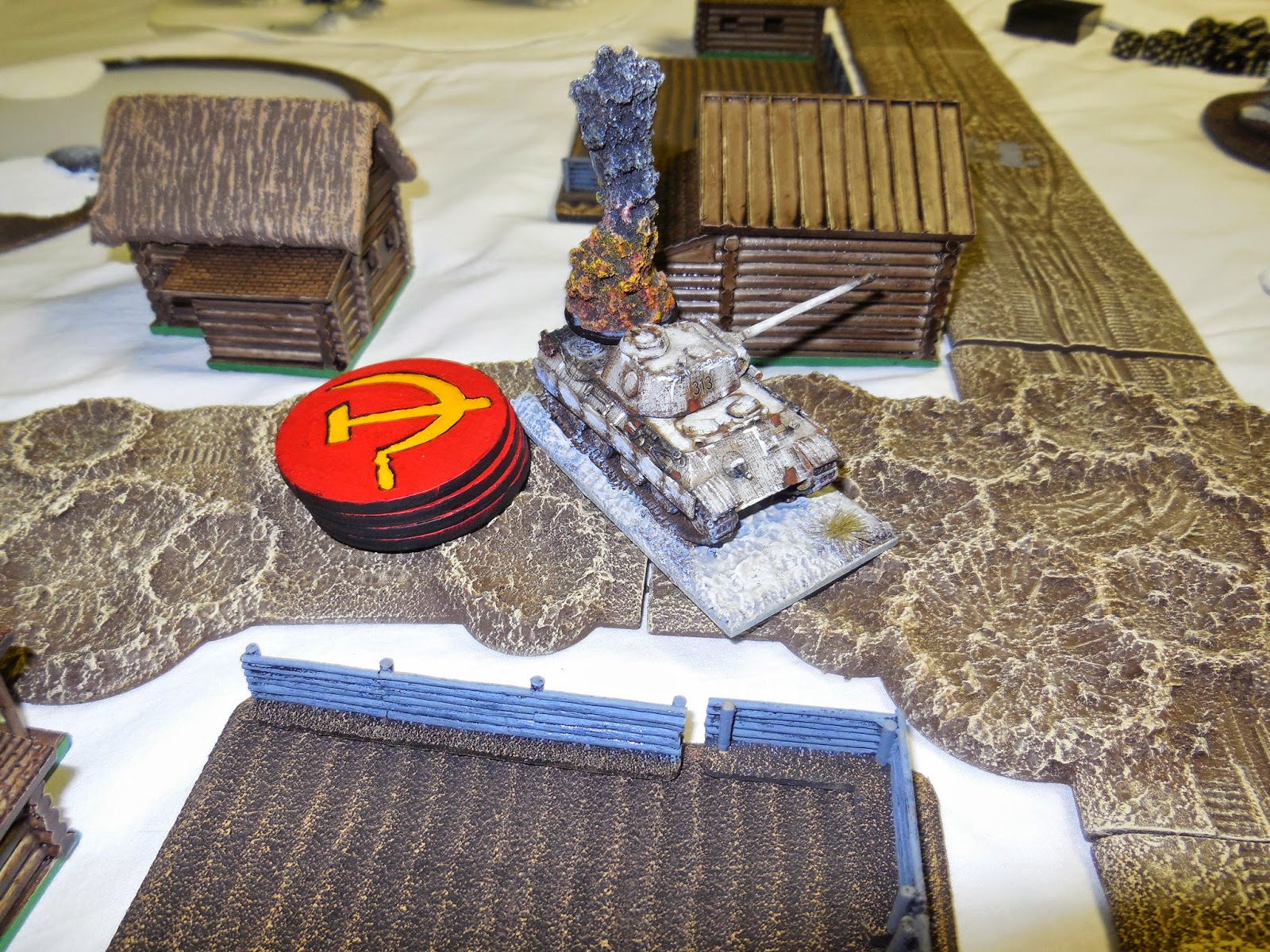 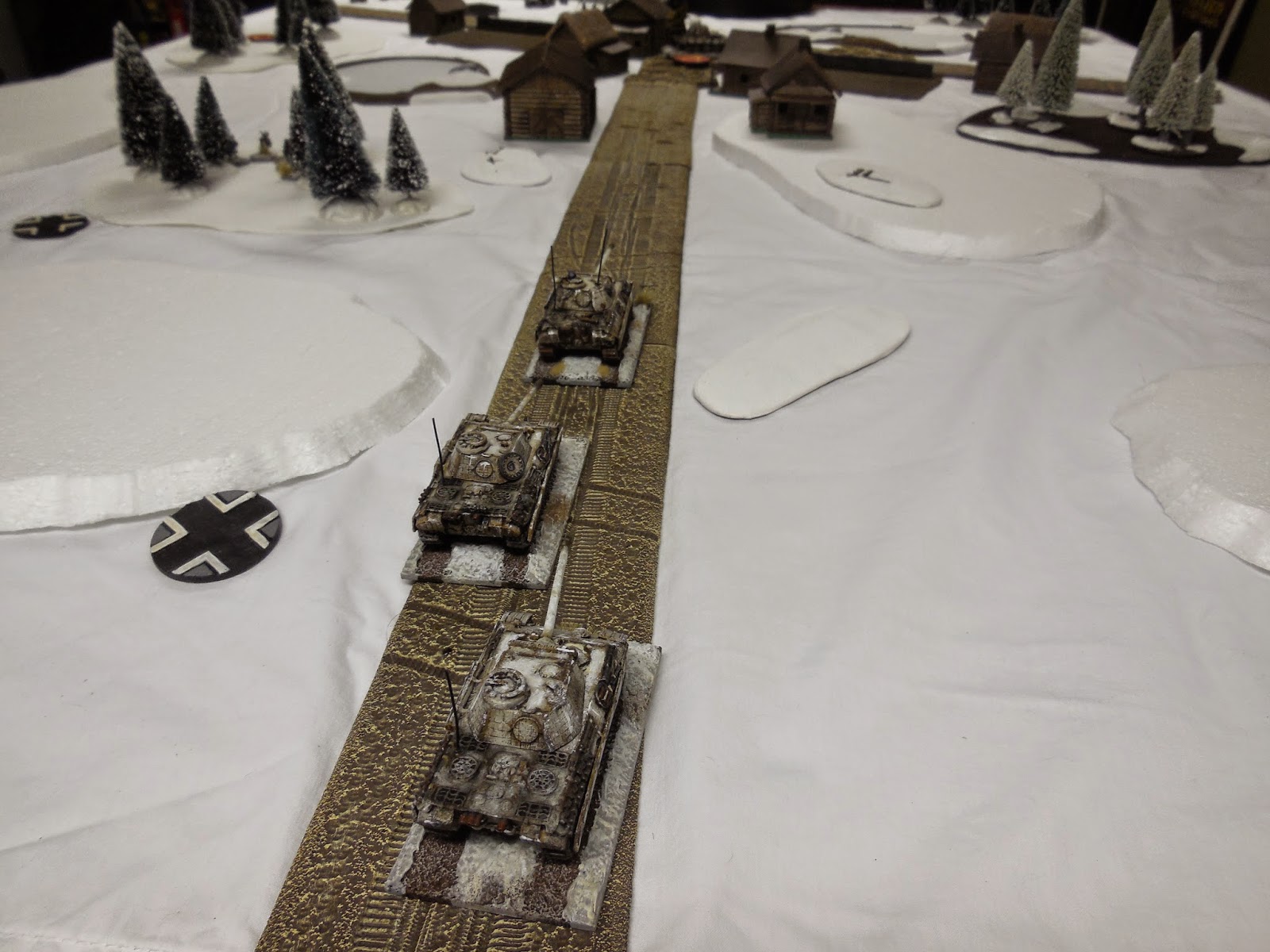 After the Patrol Phase (and I am so glad that Greg knows what he's doing with that because I STILL don't have a clue) we deployed our Panthers along the road. Off-road was pretty bad going and we knew time was of the essence. 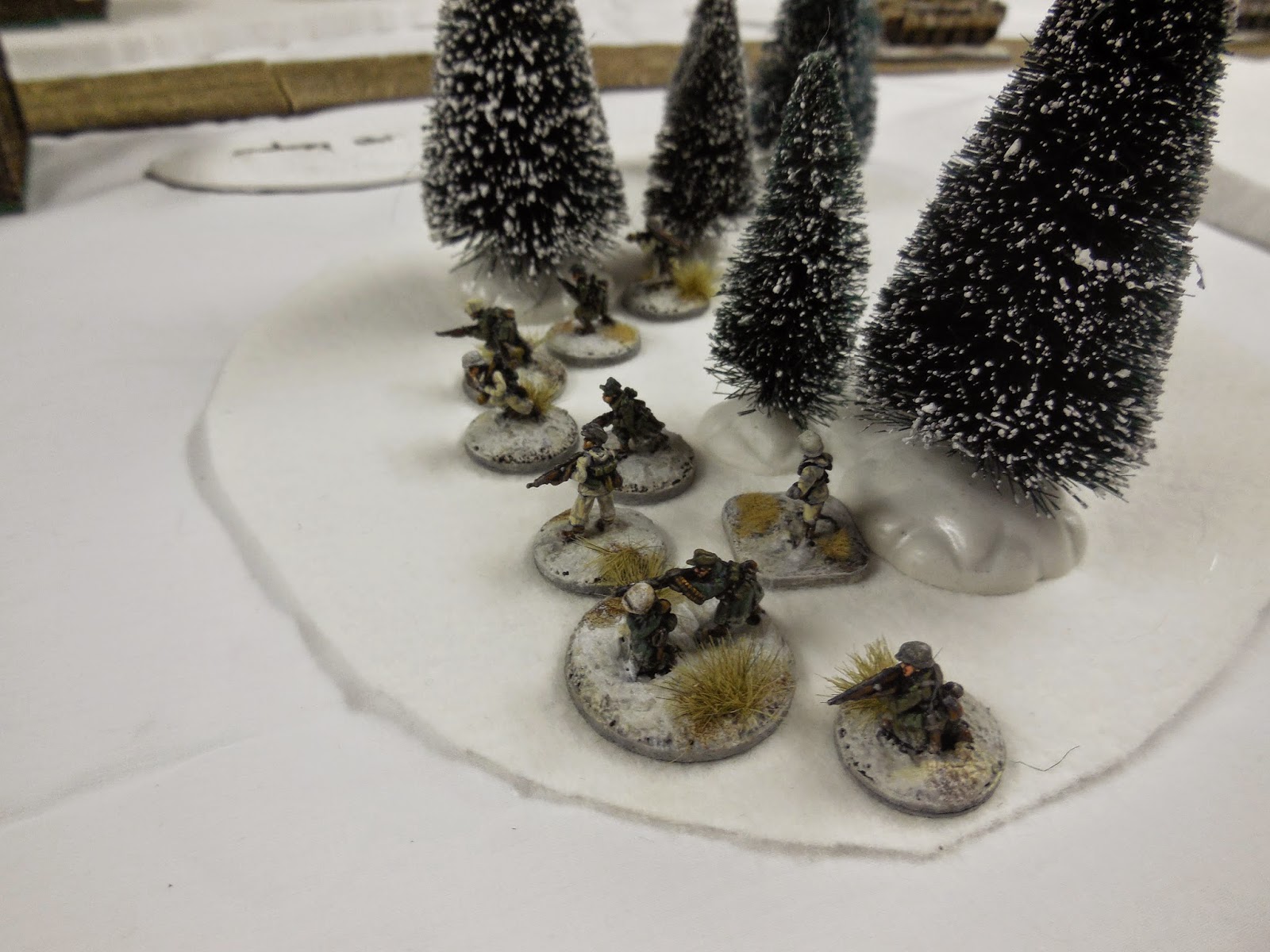 Some supporting infantry (or "dismounts" as Conscript Hugh calls them with a tanker's disdain) deployed in the woods. 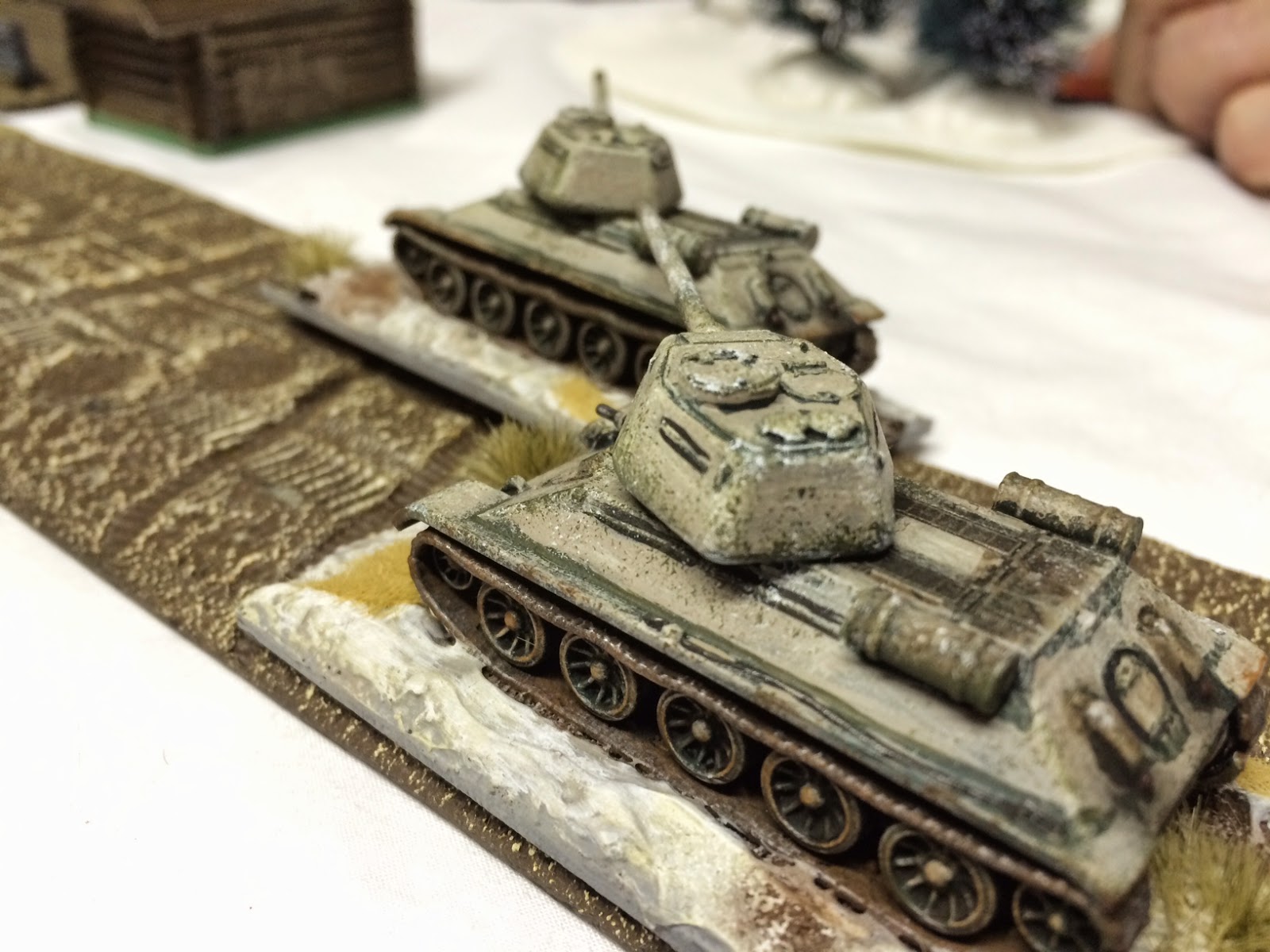 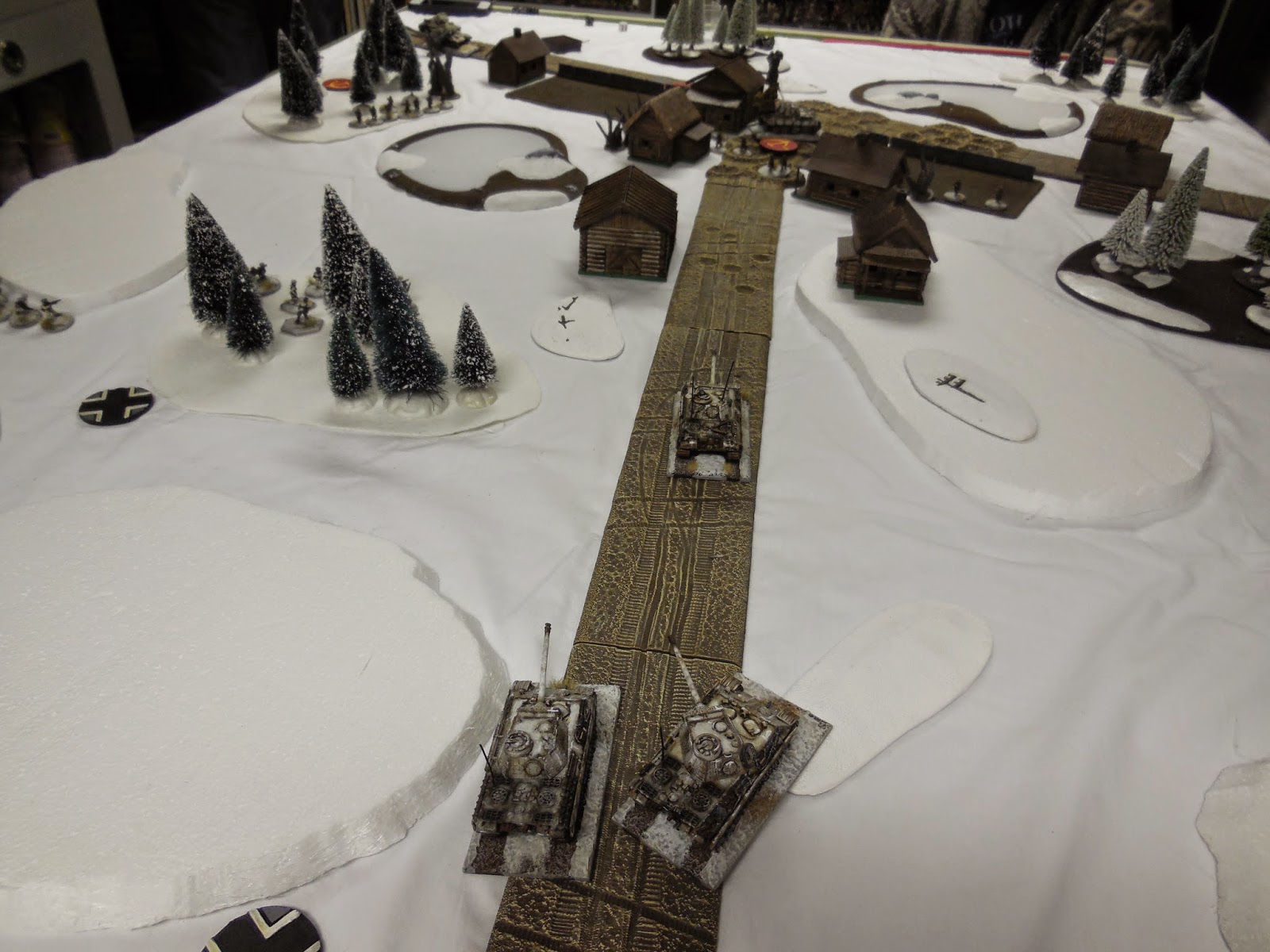 After taking a few shots at the T-34 that appeared at the very top left on the road, the Panther platoon commander ordered all ahead full and left his subordinates to deal with the enemy, which they, being good subordinates, did. 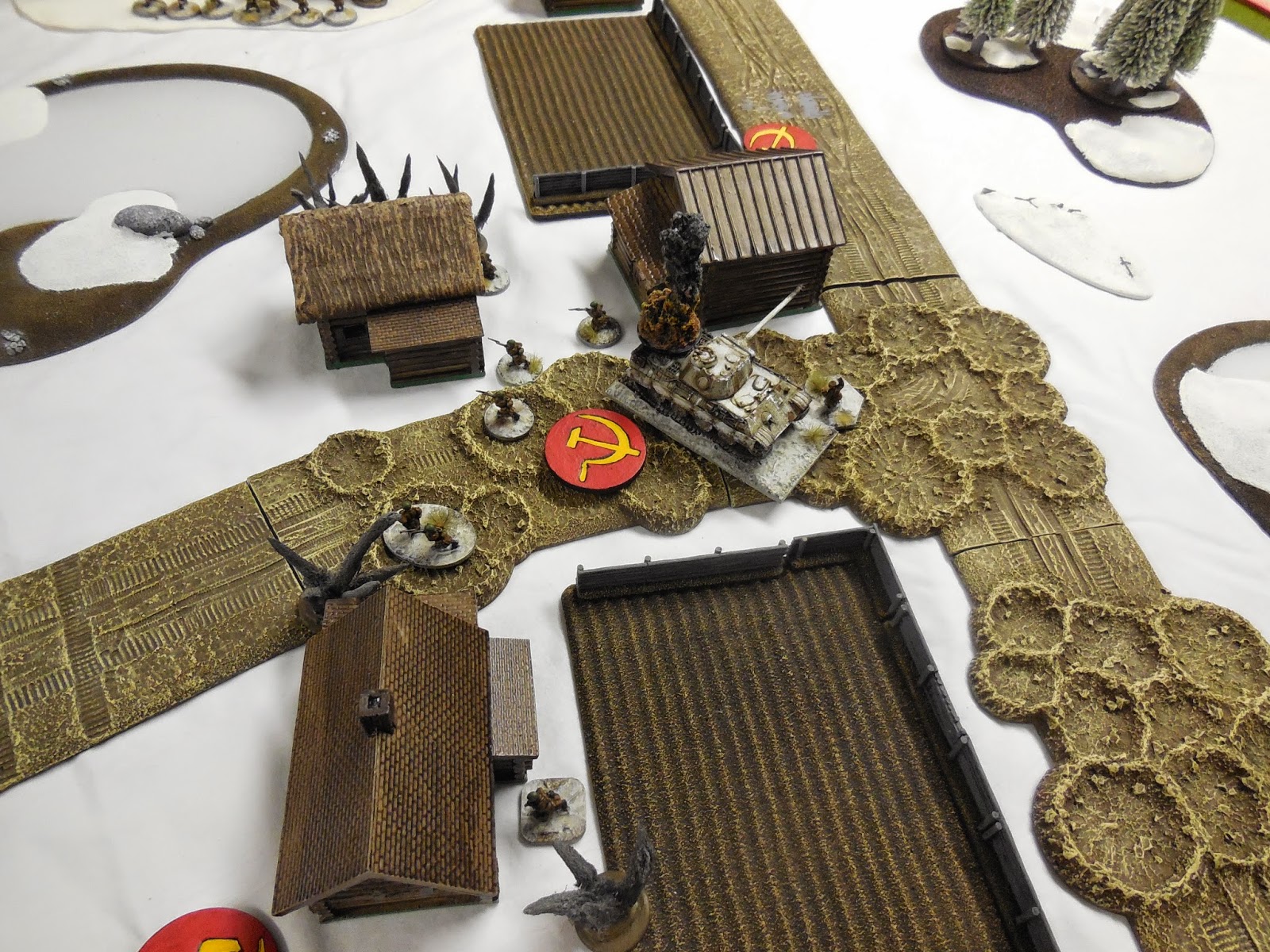 Meanwhile, some Russians deployed in the houses around the crossroads. You can see some Shock markers placed by German infantry fire. 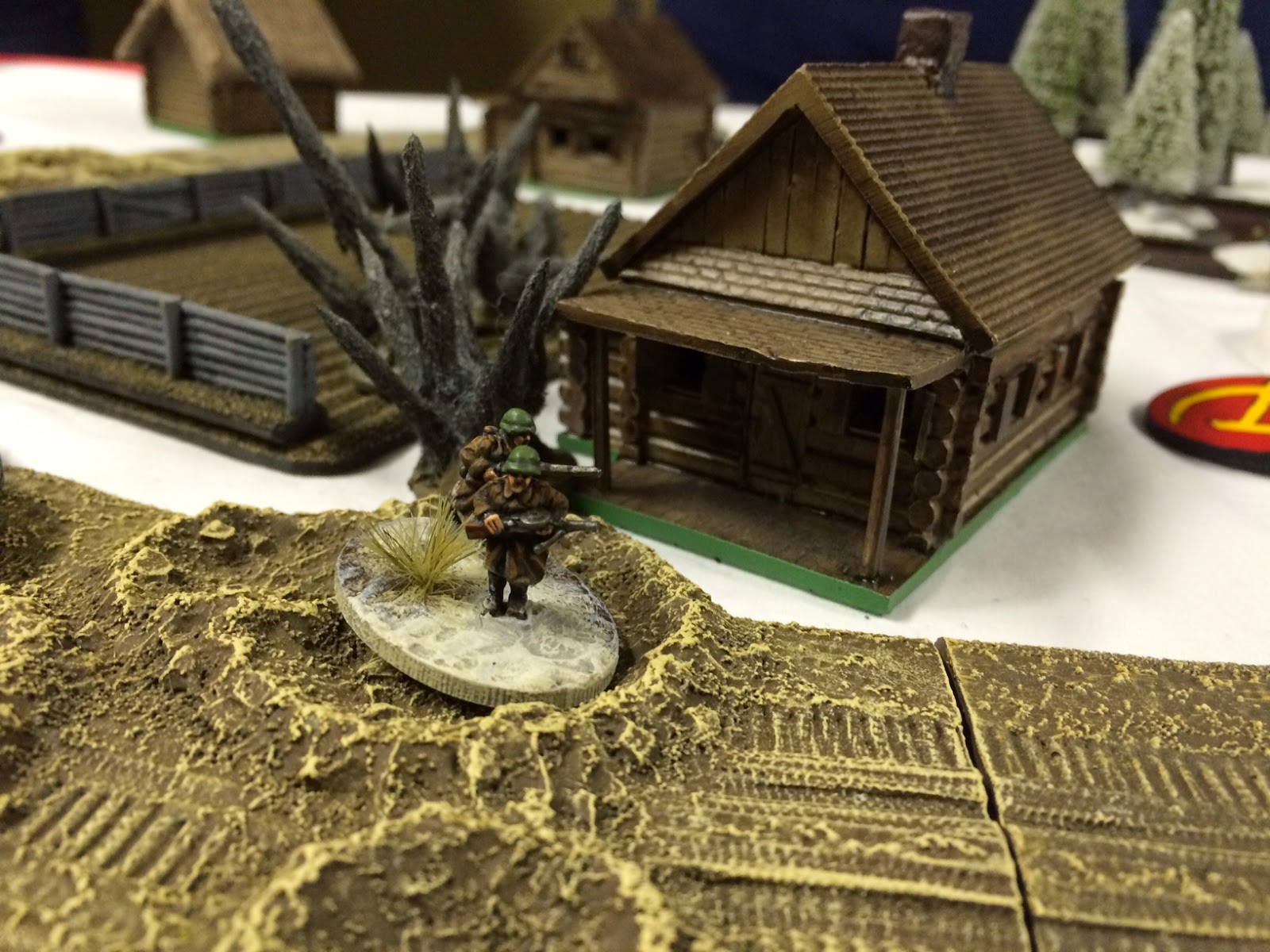 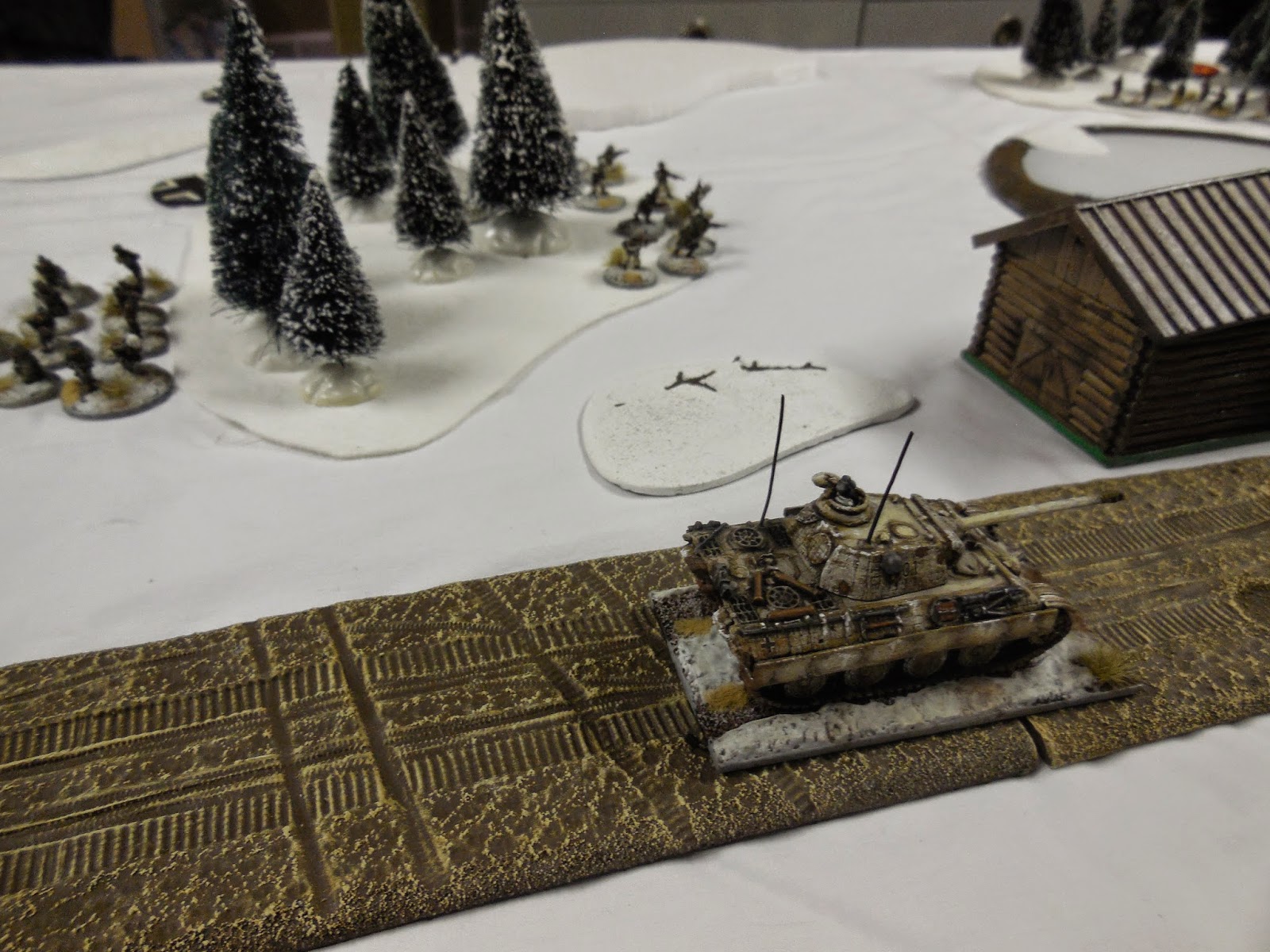 Panther commander steams up the road as friendly infantry scrambles to redeploy to an open flank. 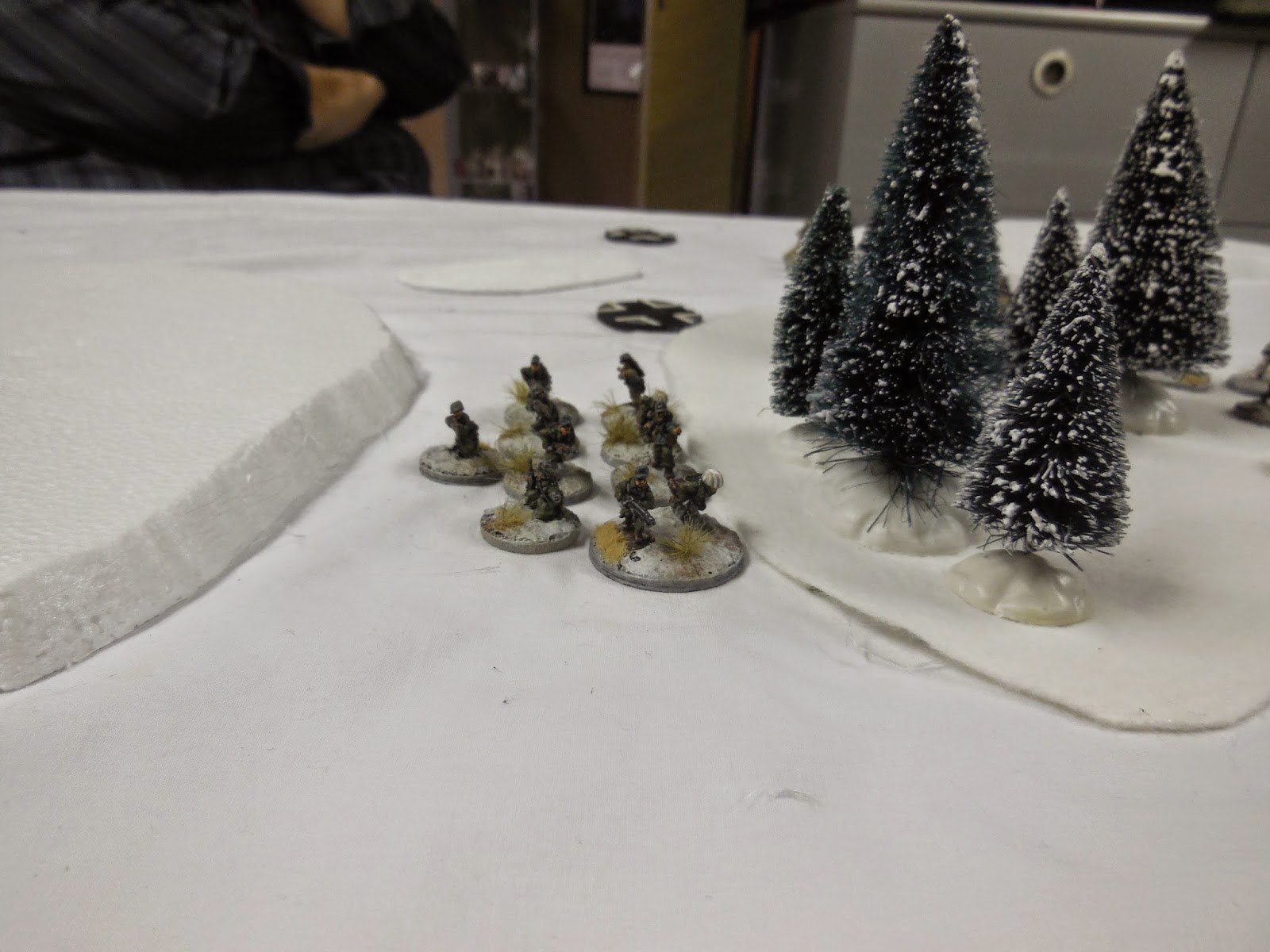 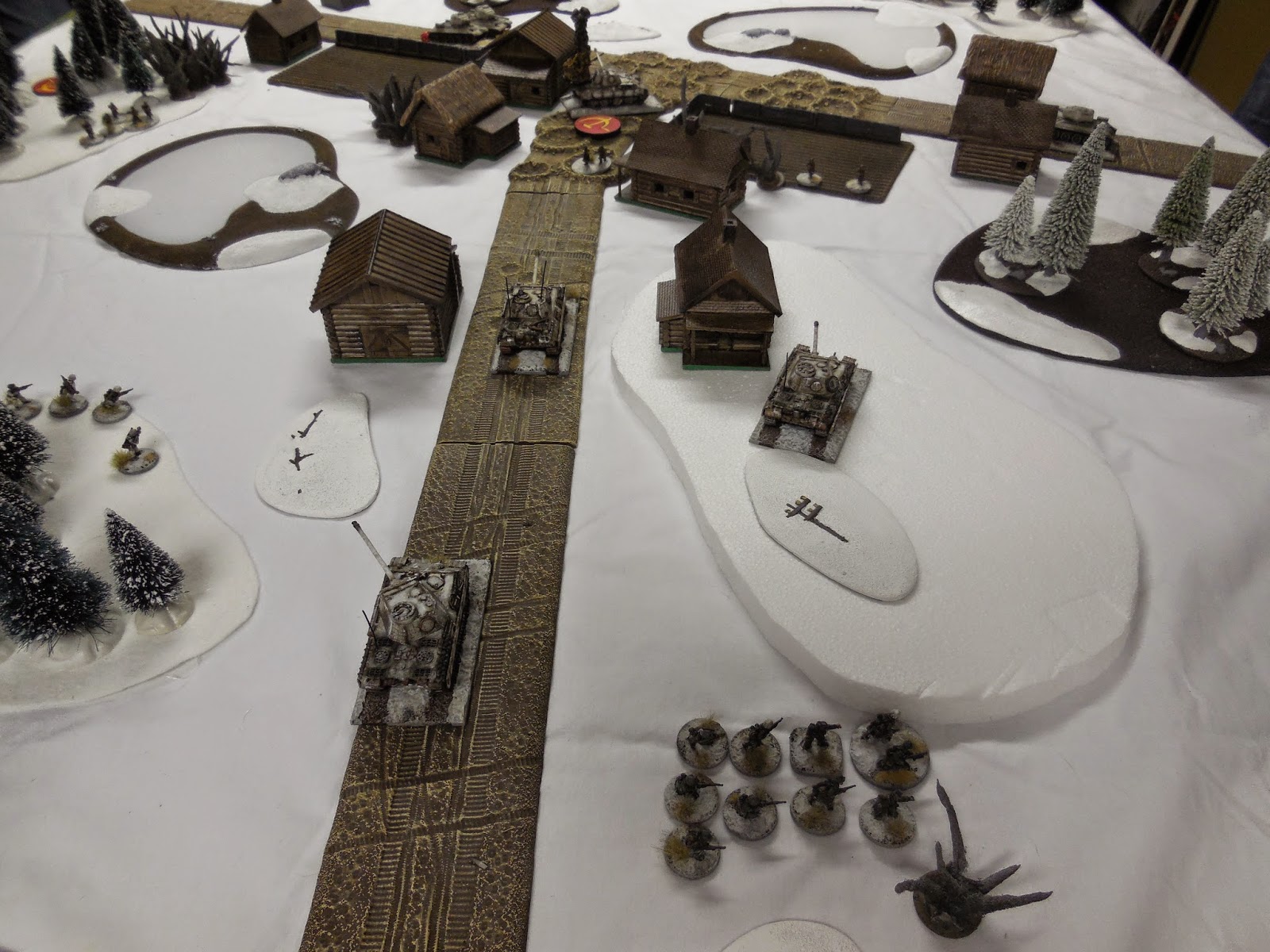 Here, some more Russian tanks have appeared (on road to left of building at top, and just above the woods at right) and the Panther platoon redeploys to address this. 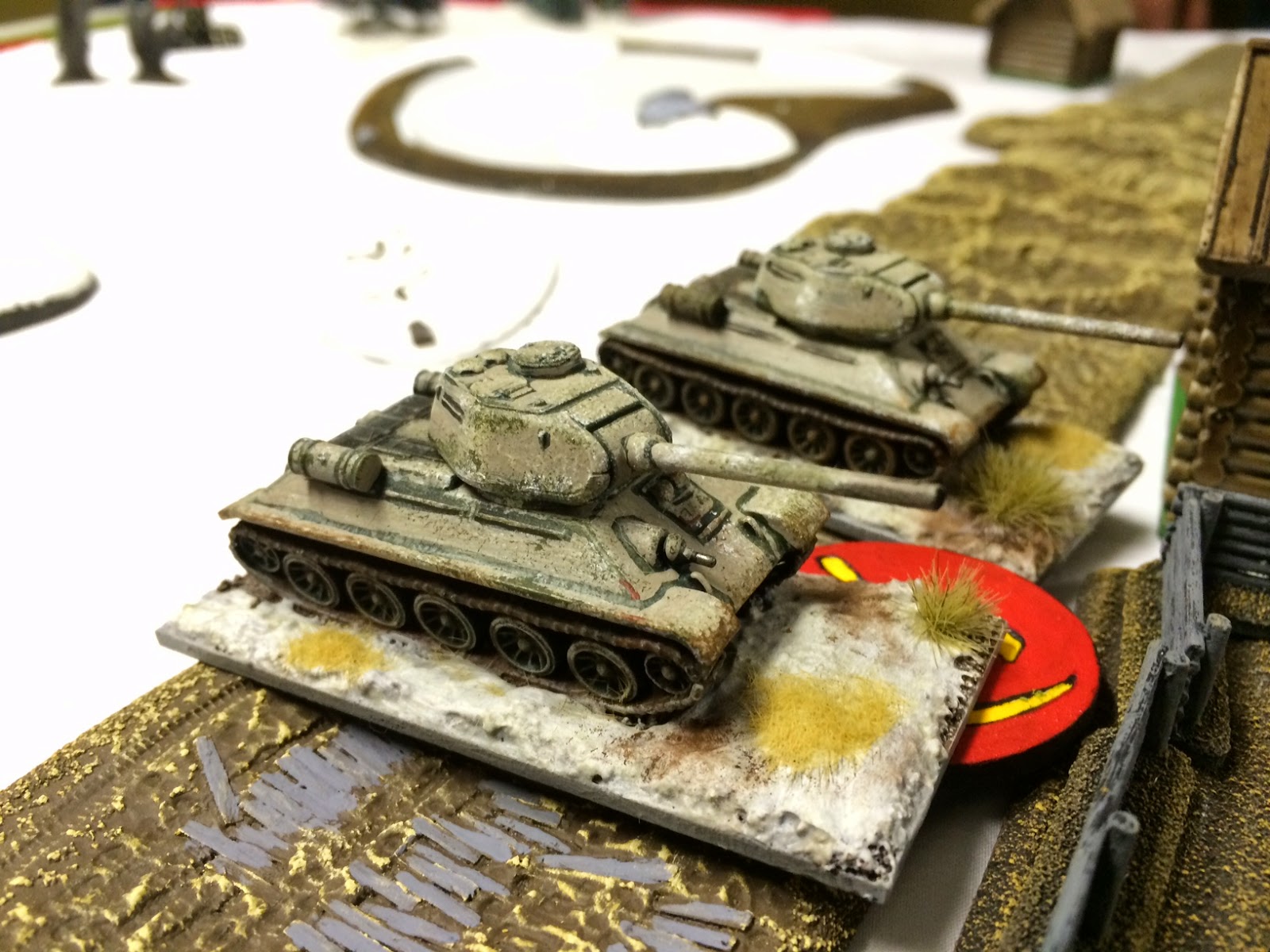 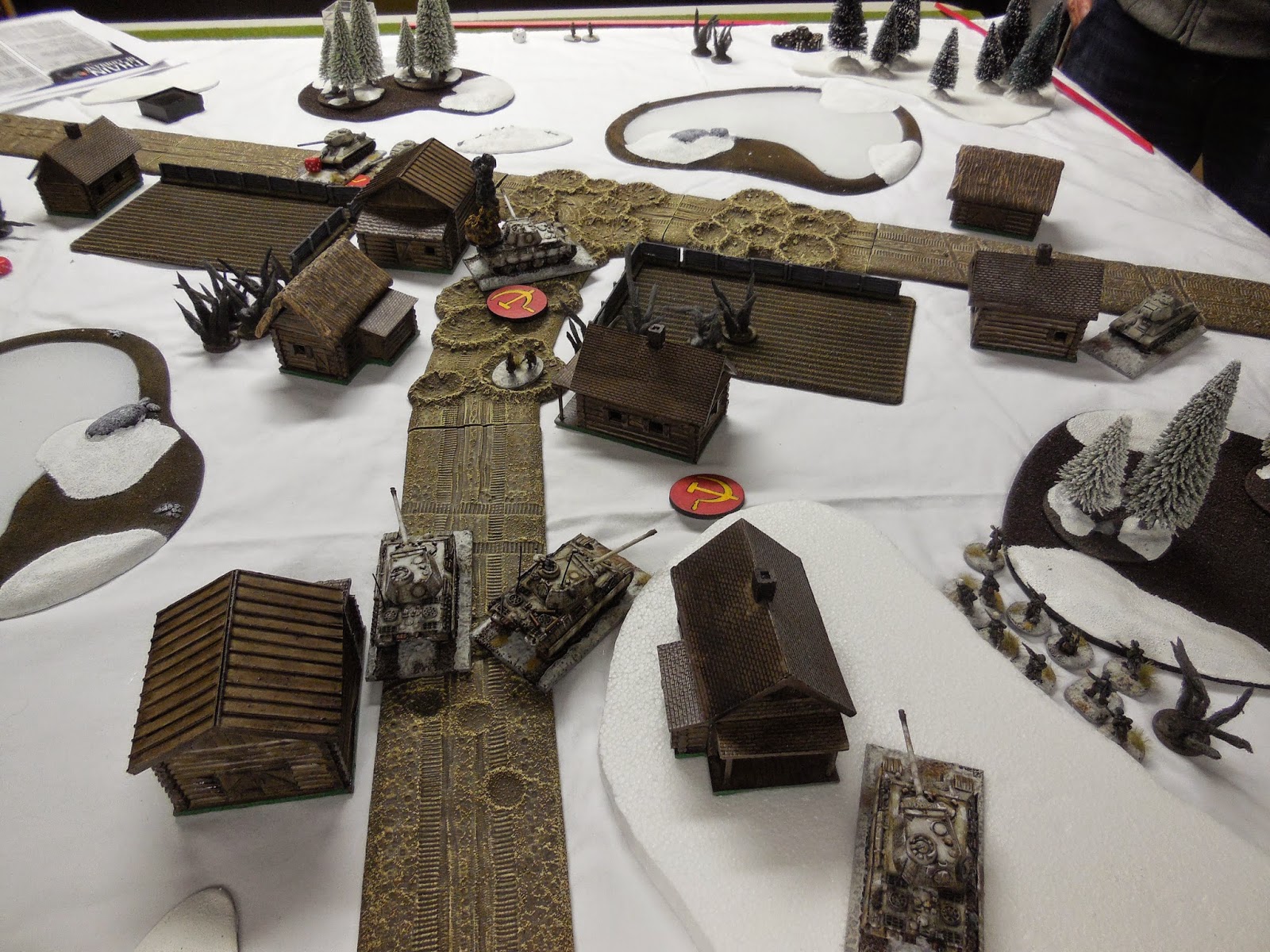 Endgame. While the two T-34s at top left have deployed to face down the German infantry, the tanks have almost reached their goal - the crossroads. The combined fire of the tanks and the infantry (especially the section at right) finally wore down the Russian defenders to the point where the Germans could use a Chain of Command die to end the turn, and the game - if the turn ends while a unit has more shock than surviving members, it disappears.

I enjoyed the game a bunch - it looked superb with Greg's lovely models and swell terrain from Miniature Building Authority and the "Battlefield in a Box" guys, supplemented by a few Lemax Christmas trees - still the best value in wargaming ;-)

Thanks again to Greg for rolling out a fantastic game and to the lads for coming out. Oh and to Conscript Kevin for bringing out a 15-pack of Lucky Lager which we will continue to enjoy this week! :-D
Posted by Dallas at 8:22 PM

That was a good game! Thanks indeed, to Greg, for putting it on.

Greg, did you know TFL have an Eastern Front set of scenarios out now?

Great looking game and table...thanks for the pics.

Thanks guys for the comments. I'm glad folks enjoyed the game - I know CoC is a bit more mentally engaging/taxing than some other rule systems out there.

Kev - I have heard TFL has an Eastern Front scenario set out, but I haven't seen it yet - I think it is set in attempted relief of the entrapped army at Stalingrad.