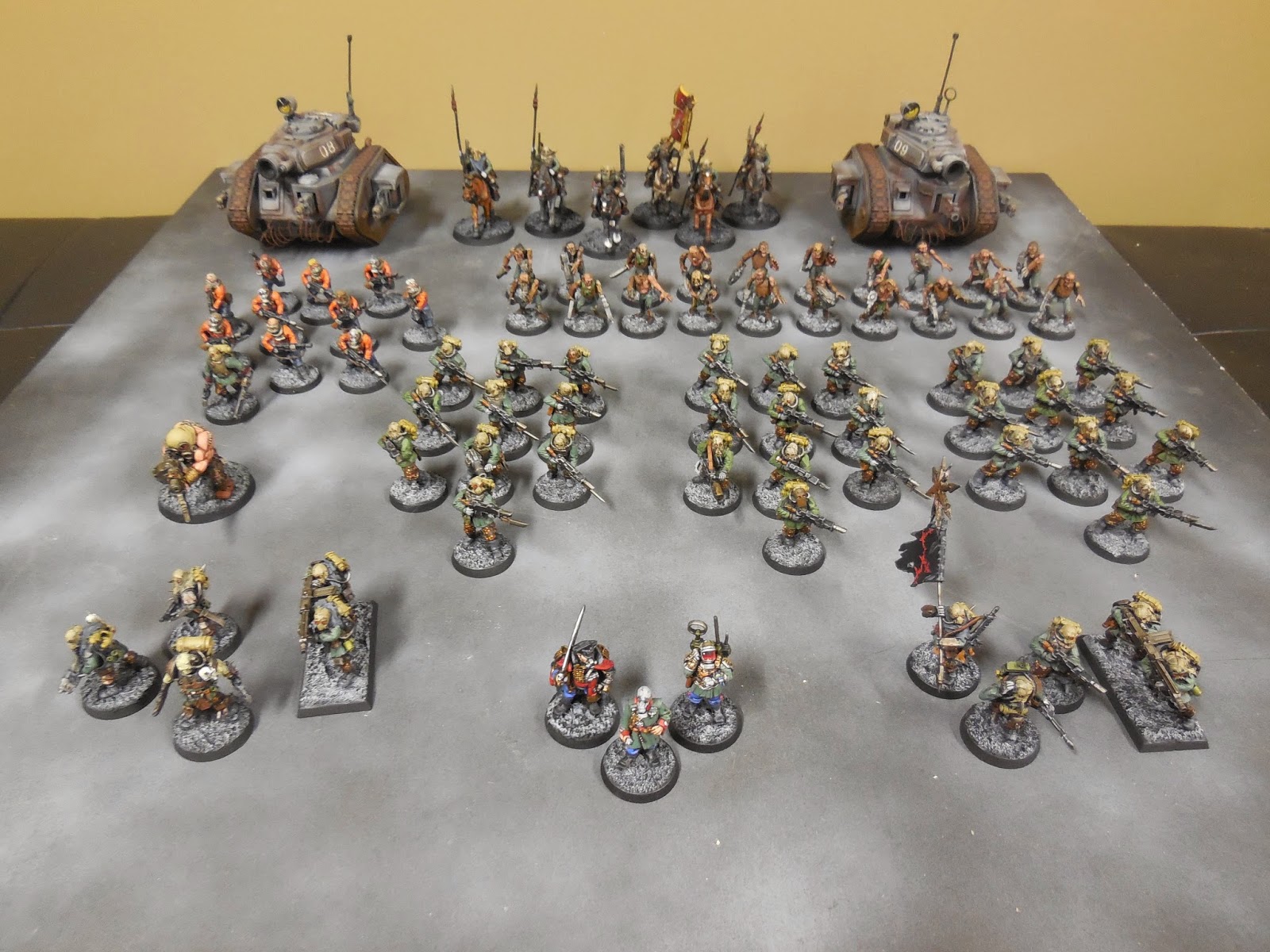 Hobby projects have a funny way of coming together. A few weeks ago I made a deal to acquire an amazing set of trench terrain boards. I'd intended for the inaugural game on the boards to be a Great War trench battle, but I'd loaned much of my Great War collection to Conscript Hugh for display at the Millennium Library.

This caused me to turn to the unpainted lead stack for inspiration. It was easily obtained - I resolved to finish enough of my Chaos Renegades to have a game on the new terrain. I'd previously painted a section of Renegades (10 models), a penal squad (also 10 models) and two Leman Russ tanks to join a bunch of converted WHFB Zombies with guns (20) that I'd done in the early 2000's for a painting challenge at the local GW.

That just left the real donkey work - painting the rest of the Renegades platoon, two more sections plus platoon command, company command and attached heavy stubber teams. Oh and a force commander, and maybe finishing up the six Rough Riders/Chaos Death Guard cavalry that had been sitting in primer for over three years... 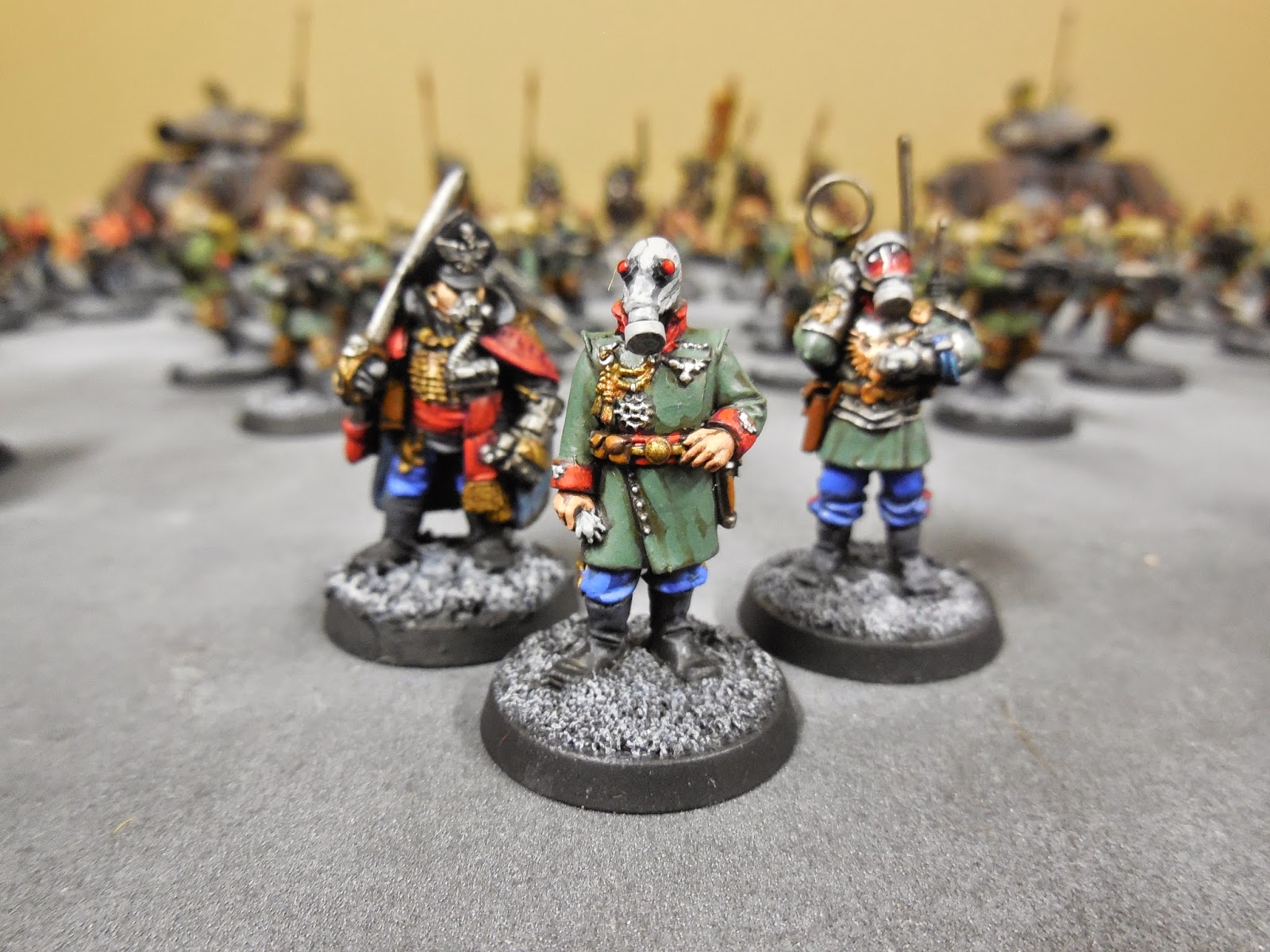 Here's the overall commander - you'll recognize him as an Astra Militarum "Regimental Advisor" with a gasmask head swap from MaxMini. 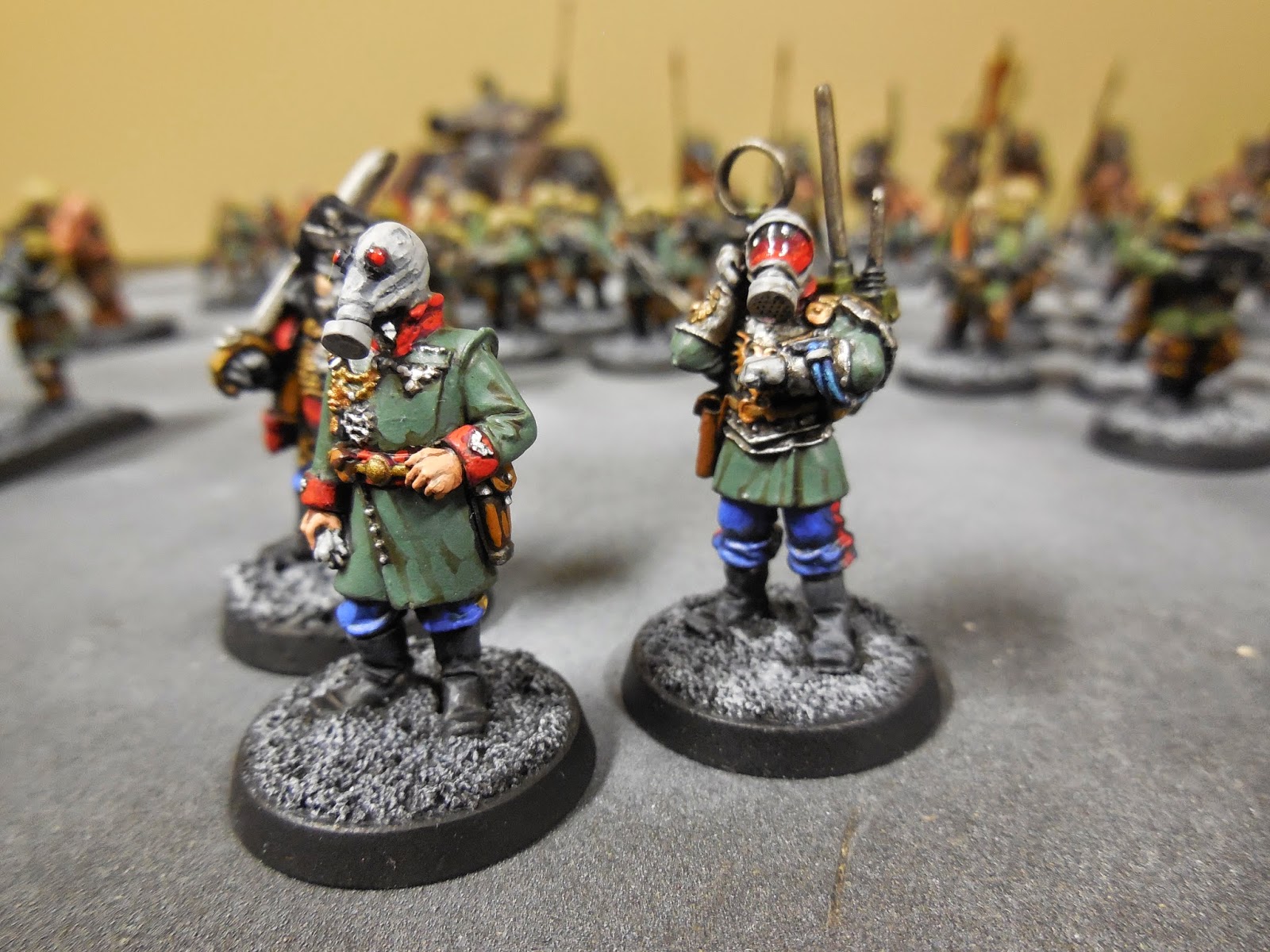 He's accompanied by another of the advisors, also with an MM swapped head. Both of these models are metal (yay!) but that meant the conversions were a bit trickier than they would be with plastic or resin. 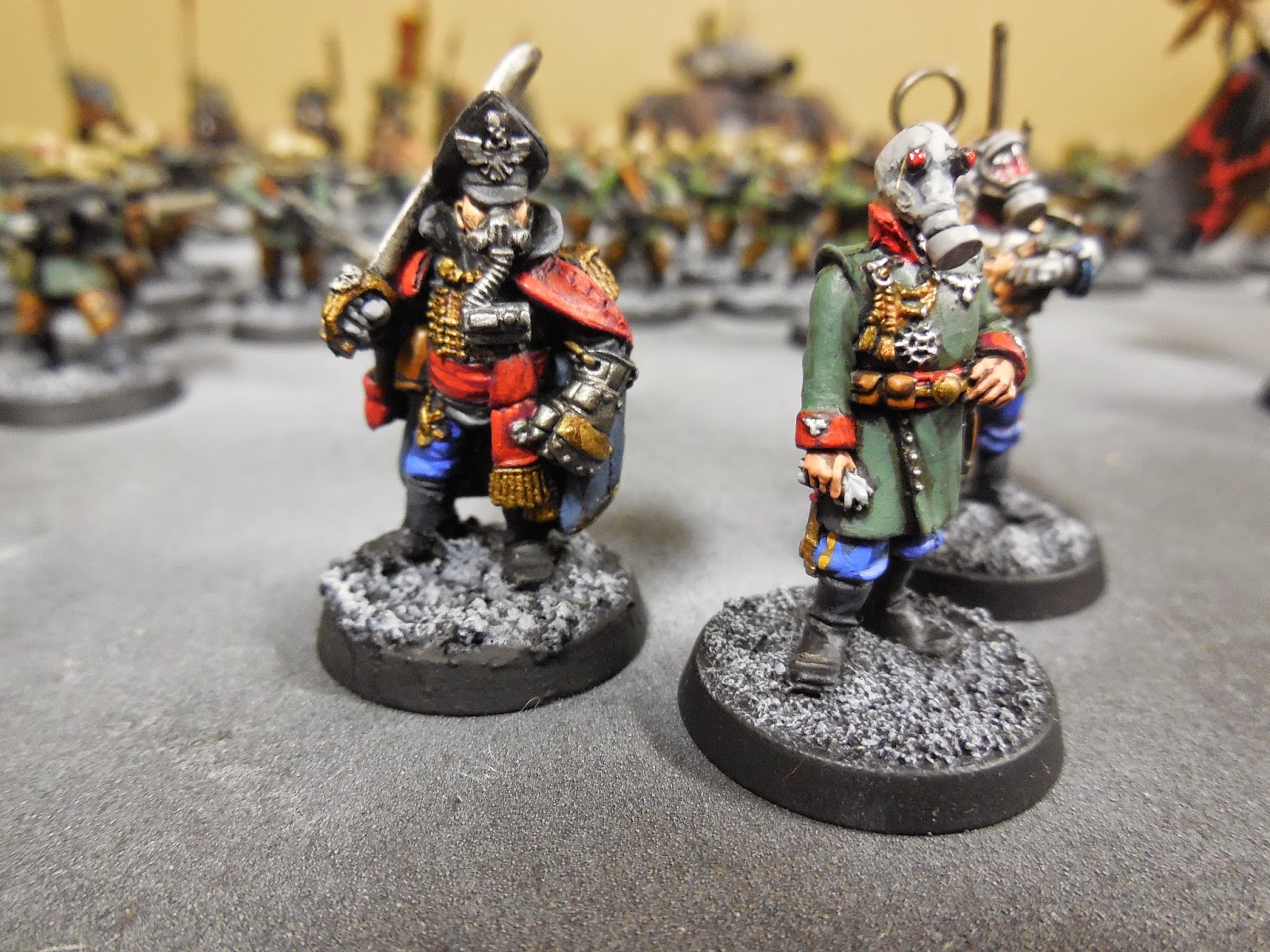 The third member of the triumvirate is a Commissar, of course - a lovely sculpt too. I just added the breather to him. He represents an "Enforcer" character in the Renegades and Heretics/Lost and the Damned army list. 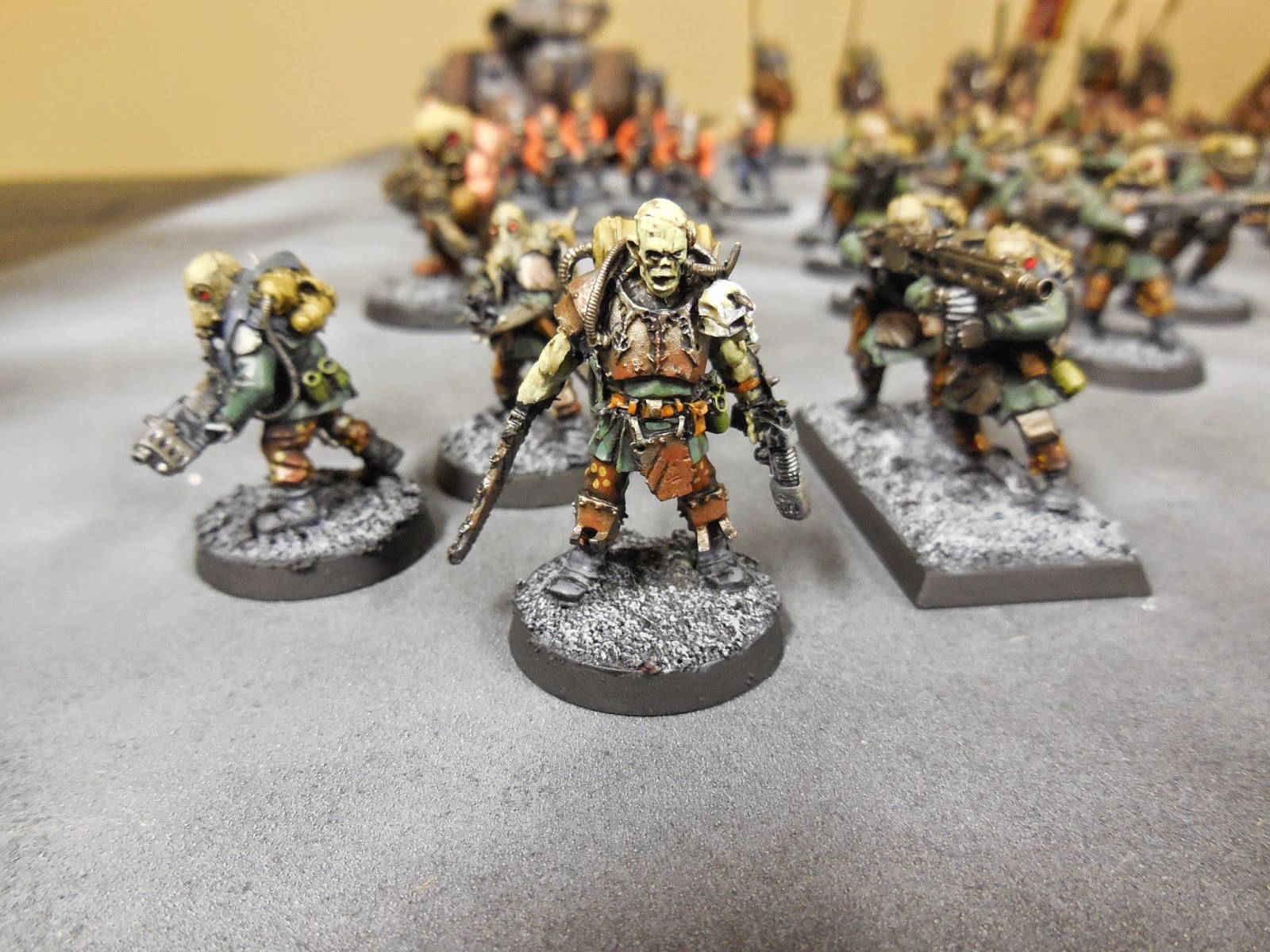 The platoon command element is lead by this rather frightening chap. He and his mates are from Forgeworld - the Renegade Command Squad. It's a nice pack that also contains a plasma gunner and autogunner (shown) as well as a standard bearer and vox. 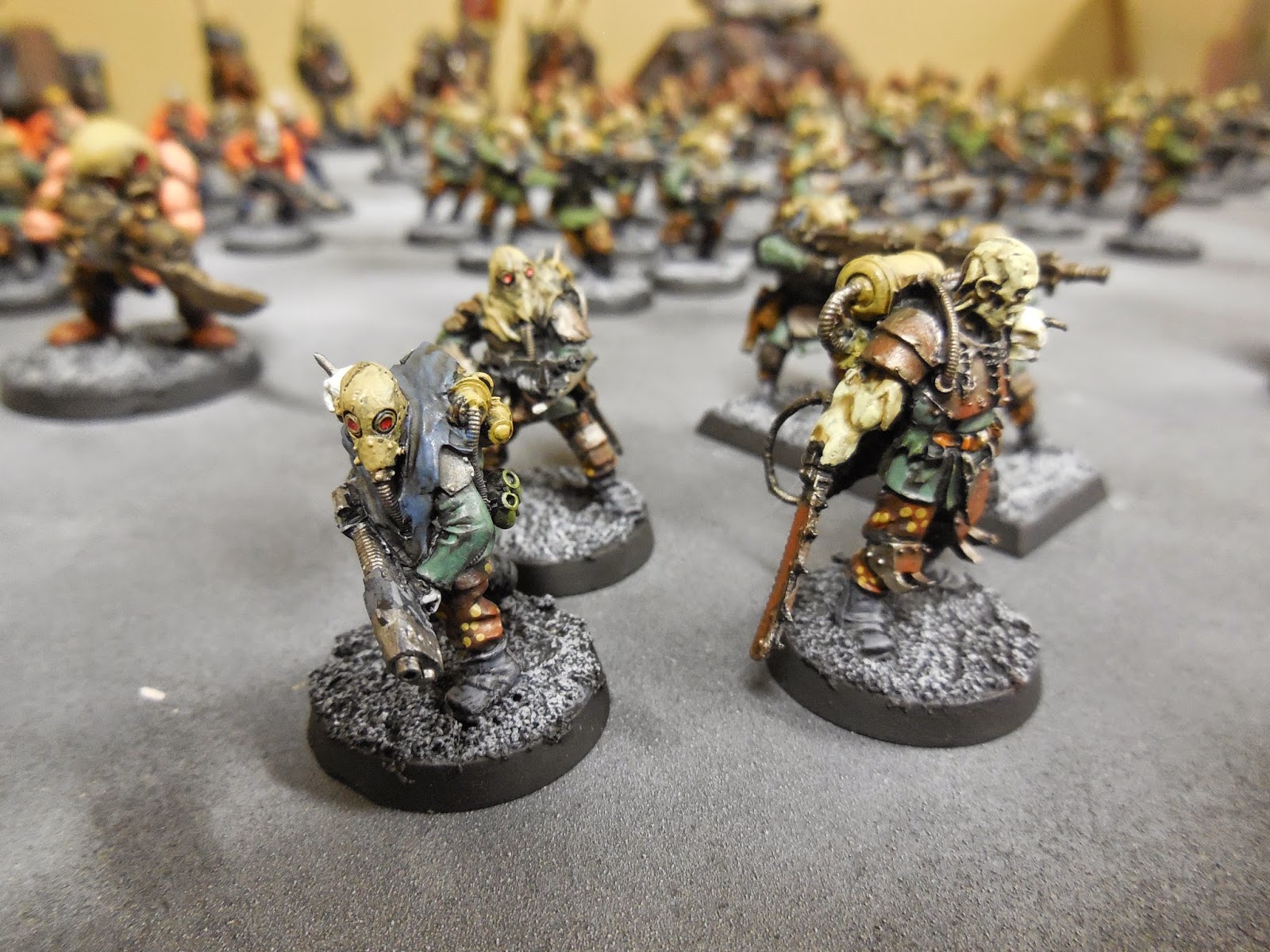 Curiously, the platoon ﻿commander is the only fellow in the army (except for the mutants) who doesn't feel the need for breathing apparatus :-) 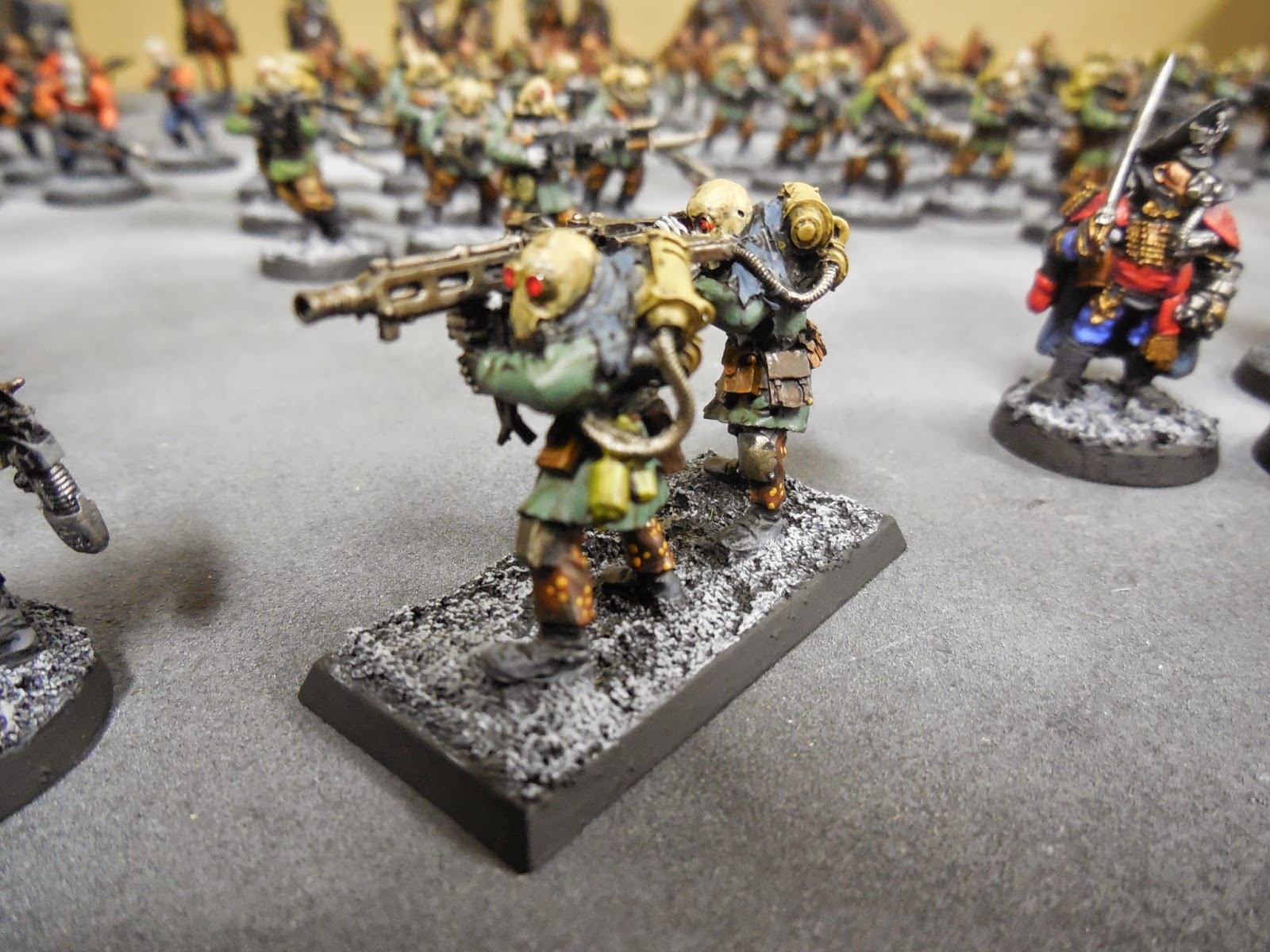 I have two of these Forgeworld Heavy Stubber Teams and they are fantastic models. The only minor niggle on them is a bendy stubber and the fact that once assembled, they don't sit level. You just need to shim under the left foot of the assistant and Robert's you mother's brother. 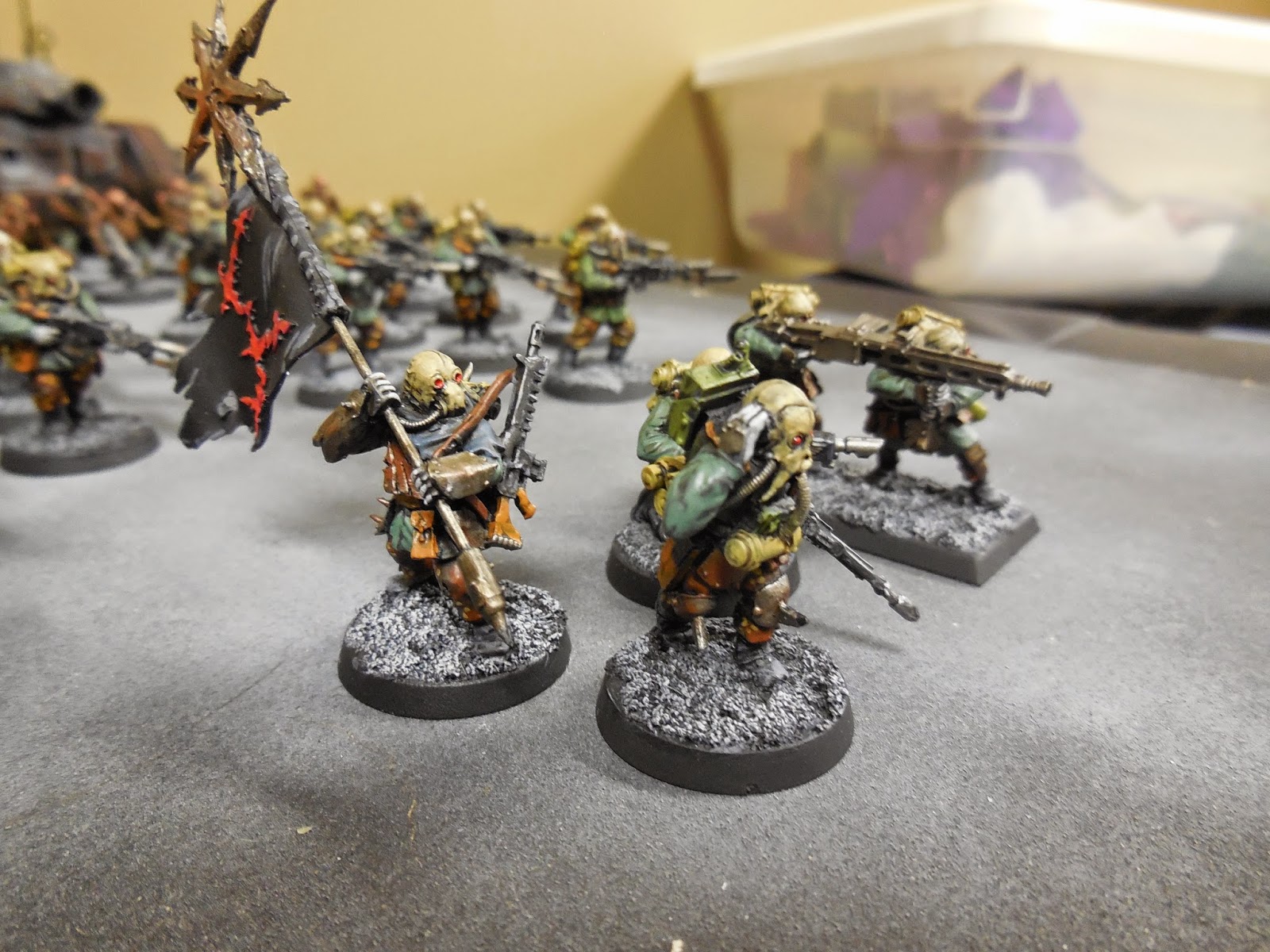 Here's the rest of the command squad, it accompanies the force commander. Standard bearer and vox from the Forgeword set and another heavy stubber team. 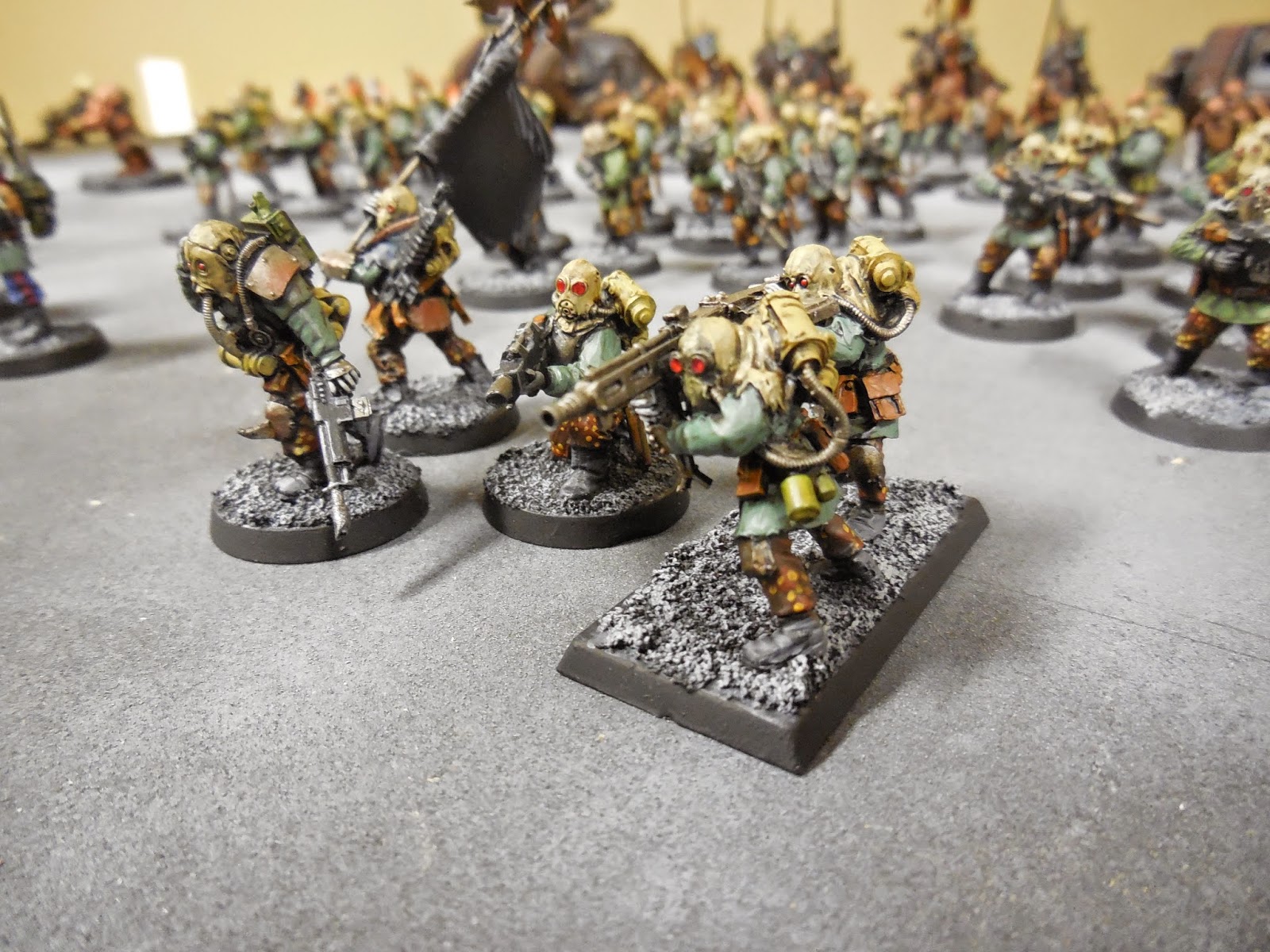 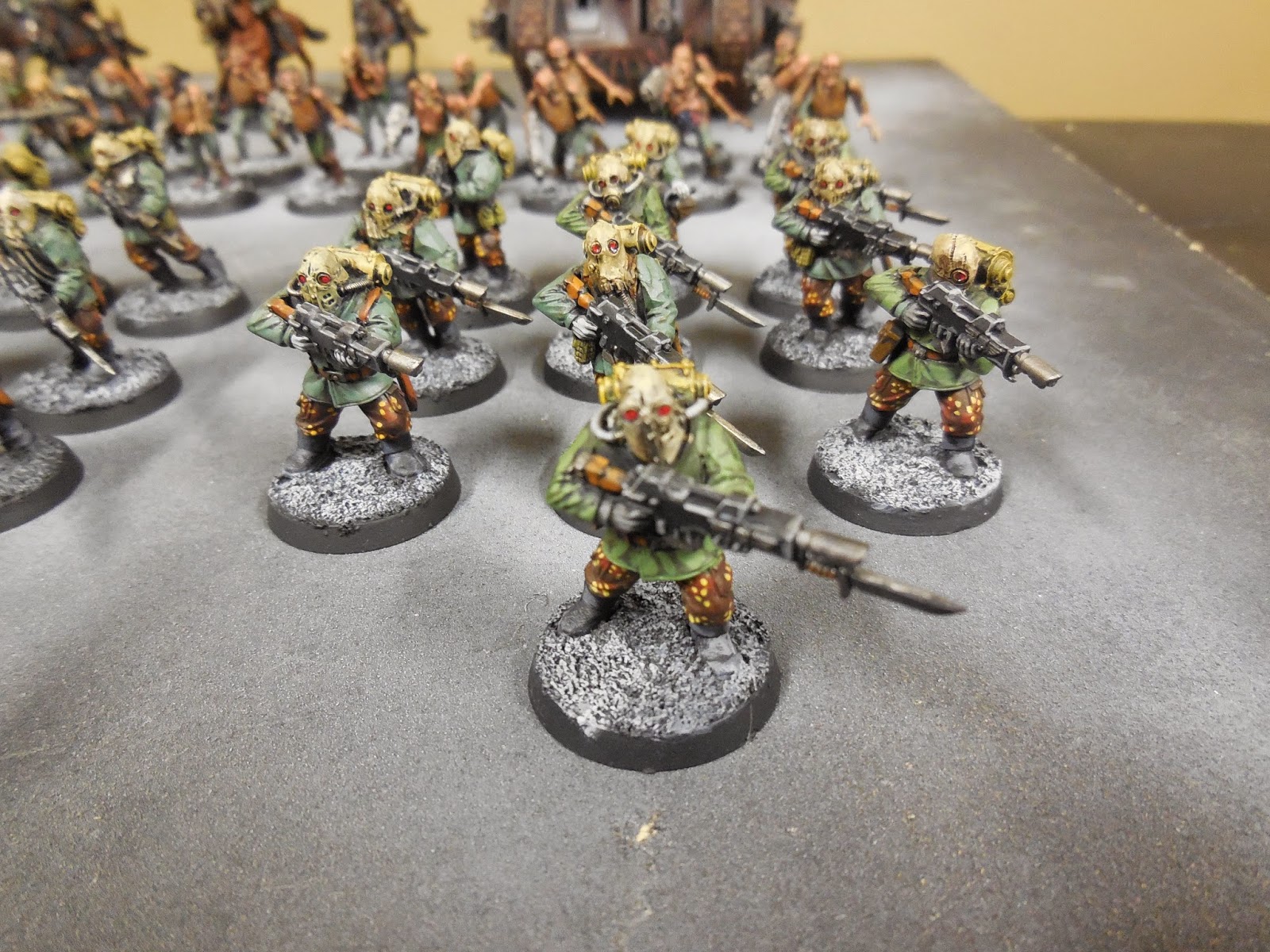 There are three ten-man sections in the platoon. All are armed with lasguns except one trooper with a flamer or grenade launcher. These models all have Forgeworld Renegade torsos with Cadian legs, arms, weapons, and kit. I did carve off the shoulder pads though as I like the look better without. 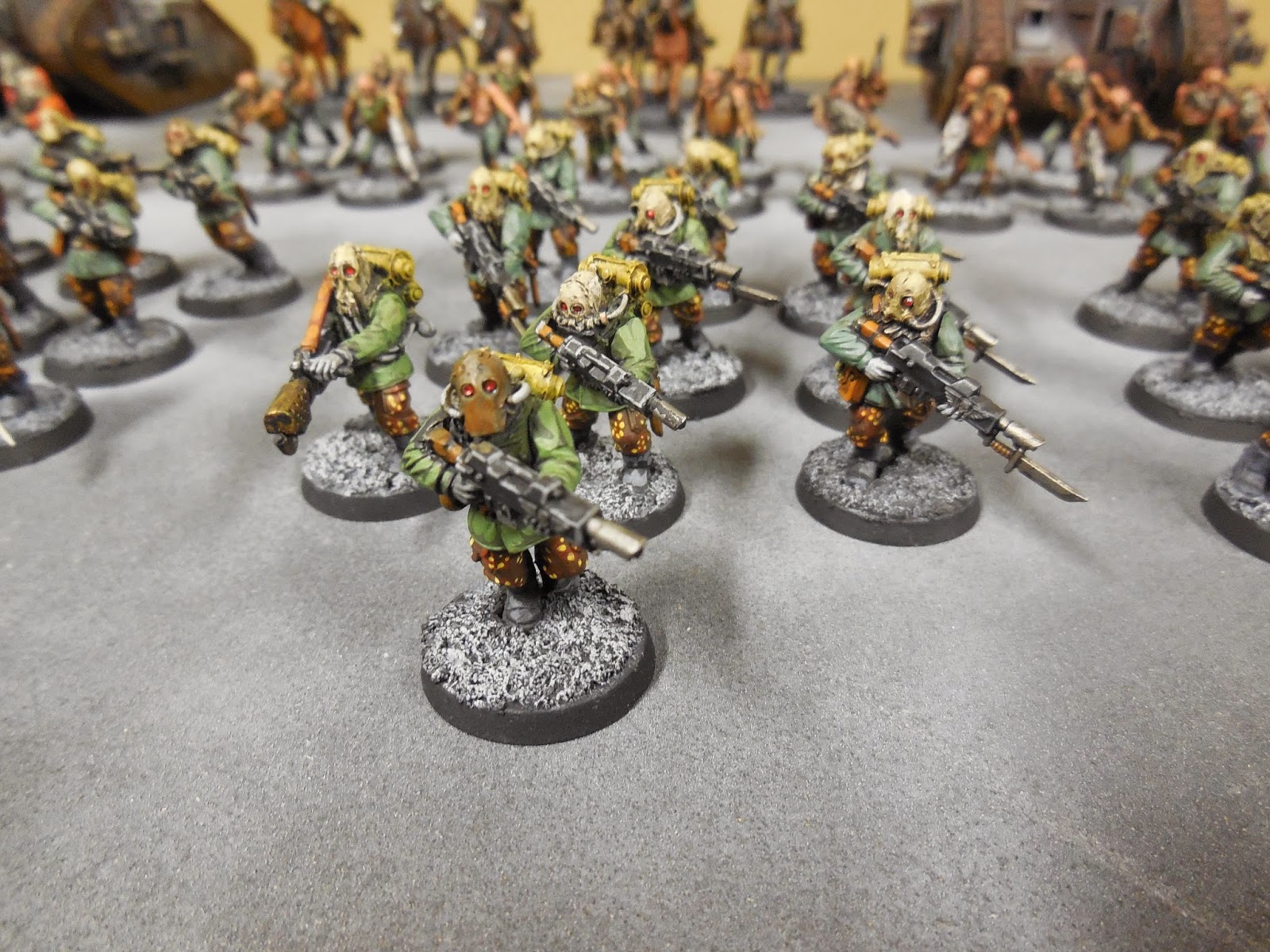 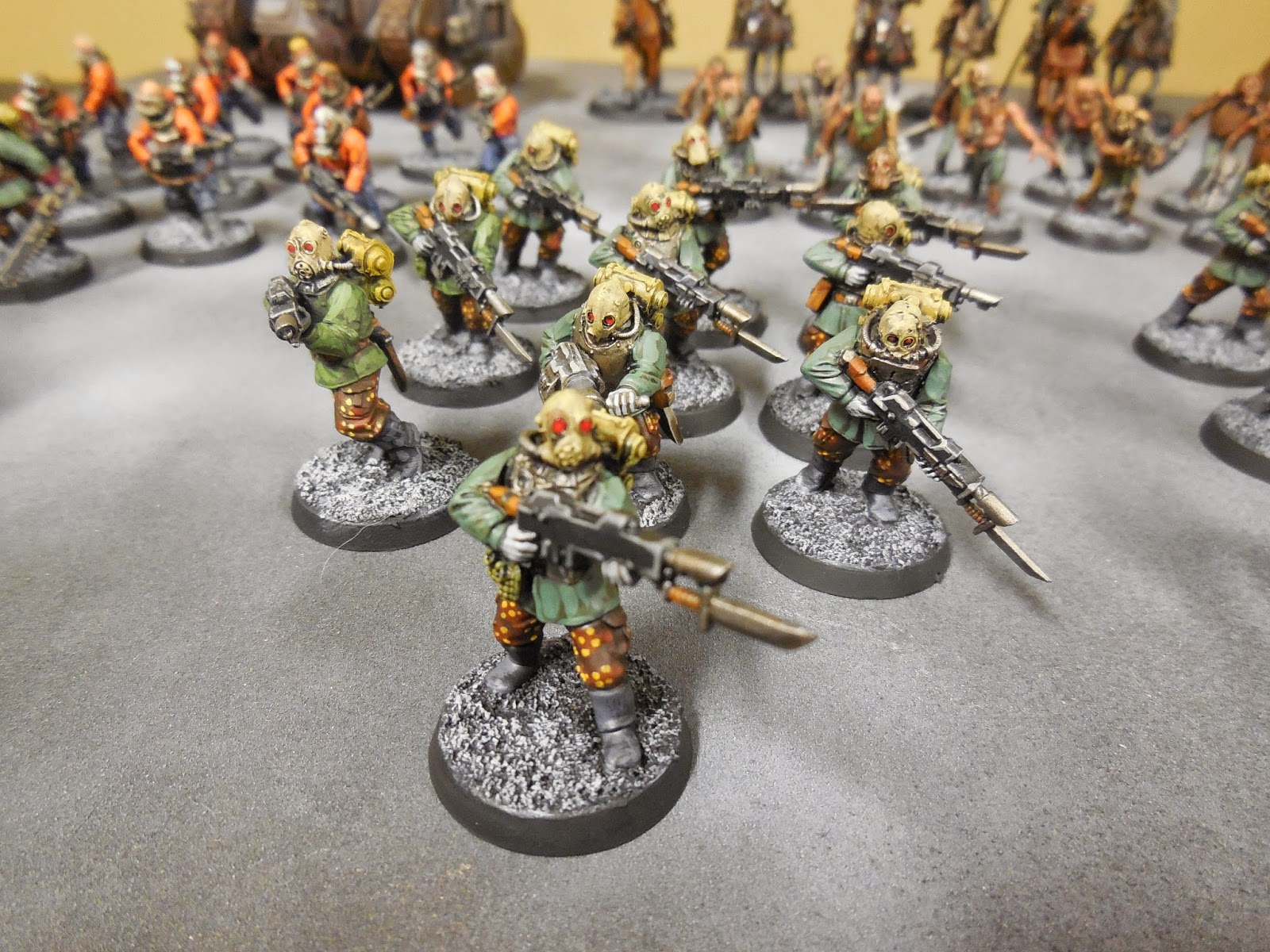 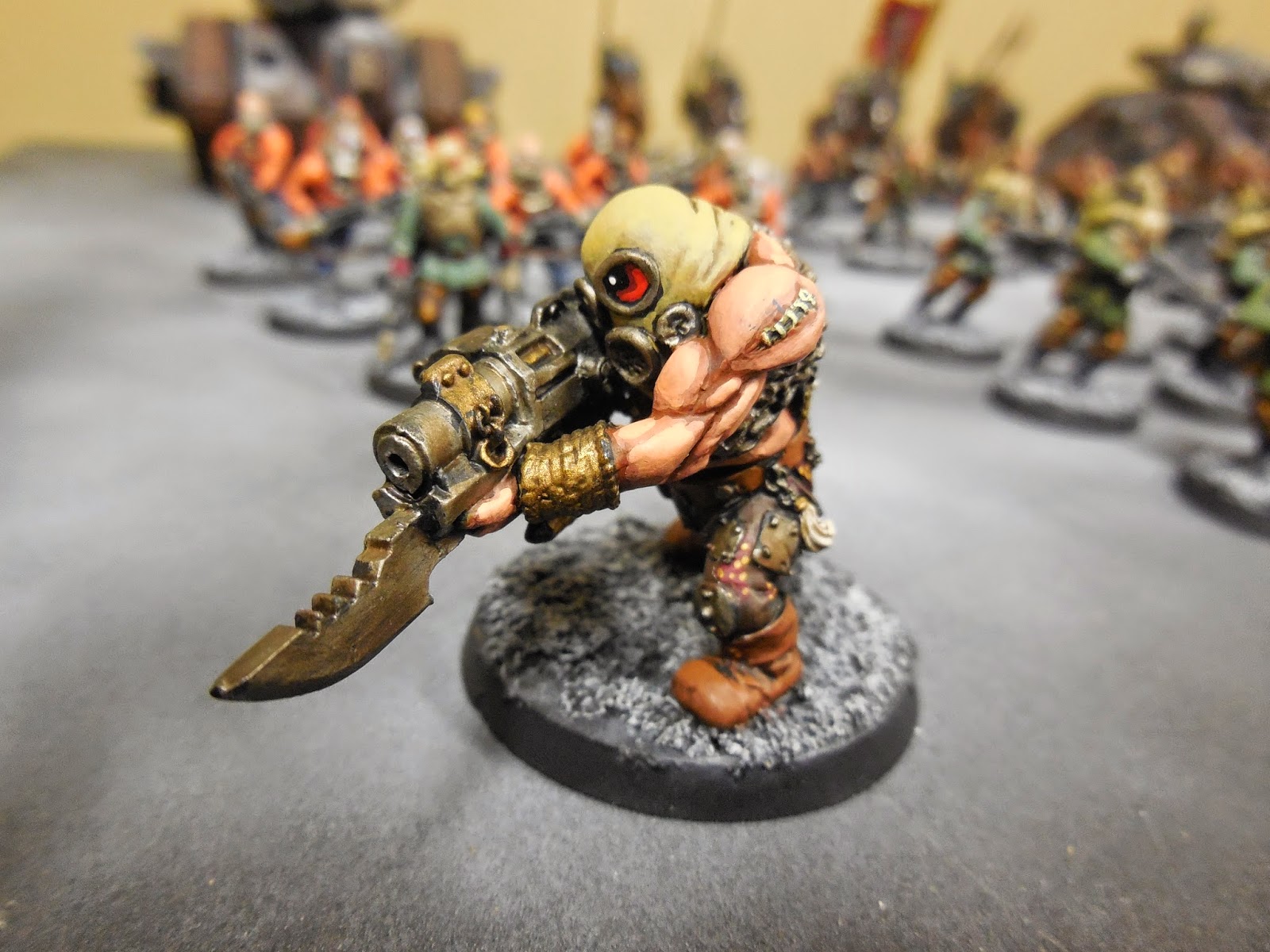 Here's a big fella - a metal Ogryn I converted and painted. I'd like to get a couple more, they are superb models. 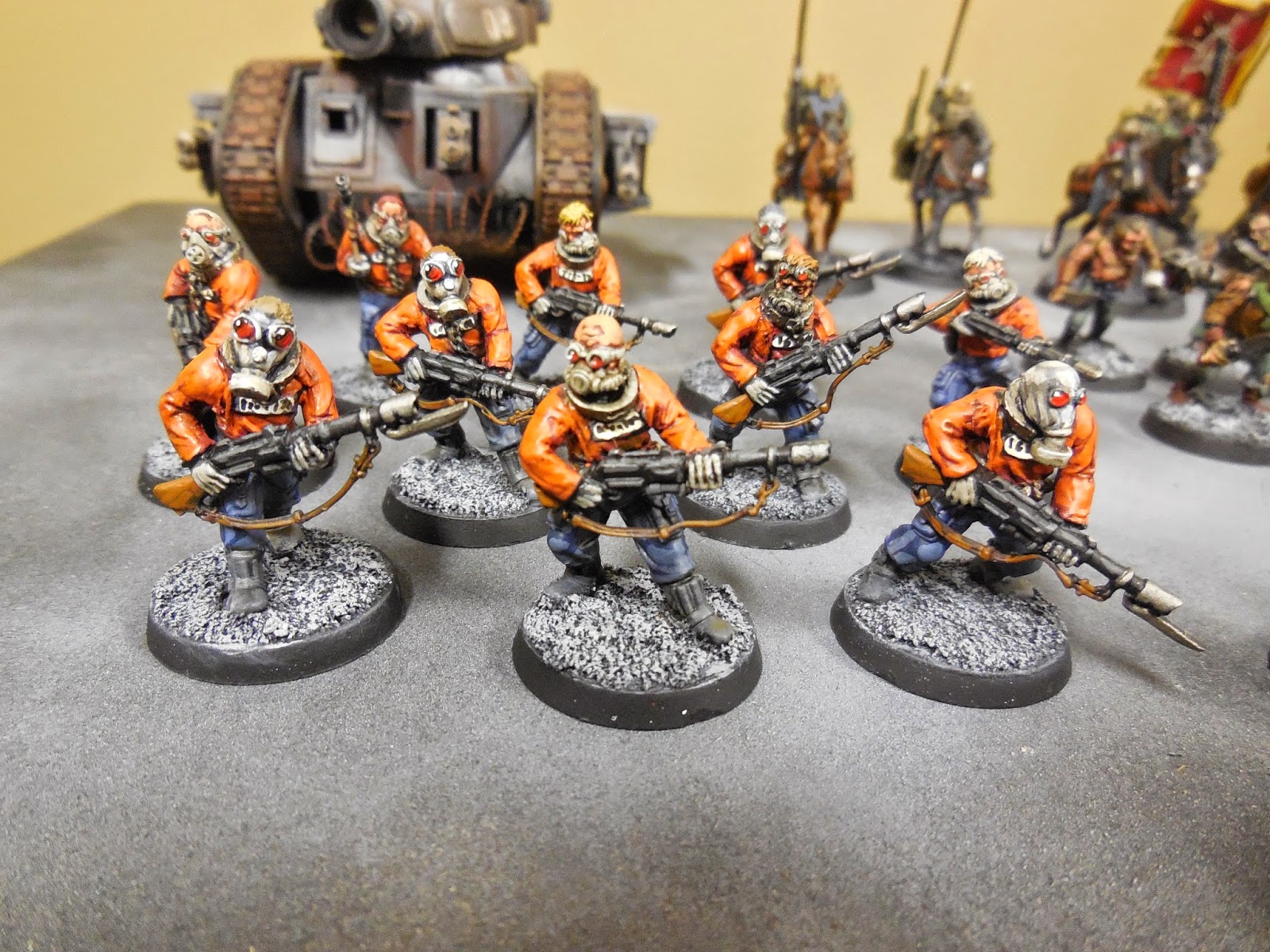 Here's the fourth section in the platoon - the penal section. These models have torsos, arms and weapons from Victoria Lamb, heads from Lamb and MaxMini, and Catachan legs from GW. I also gave them minimal equipment from GW - just the odd ammo pouch and canteen. They are penal troopers after all! 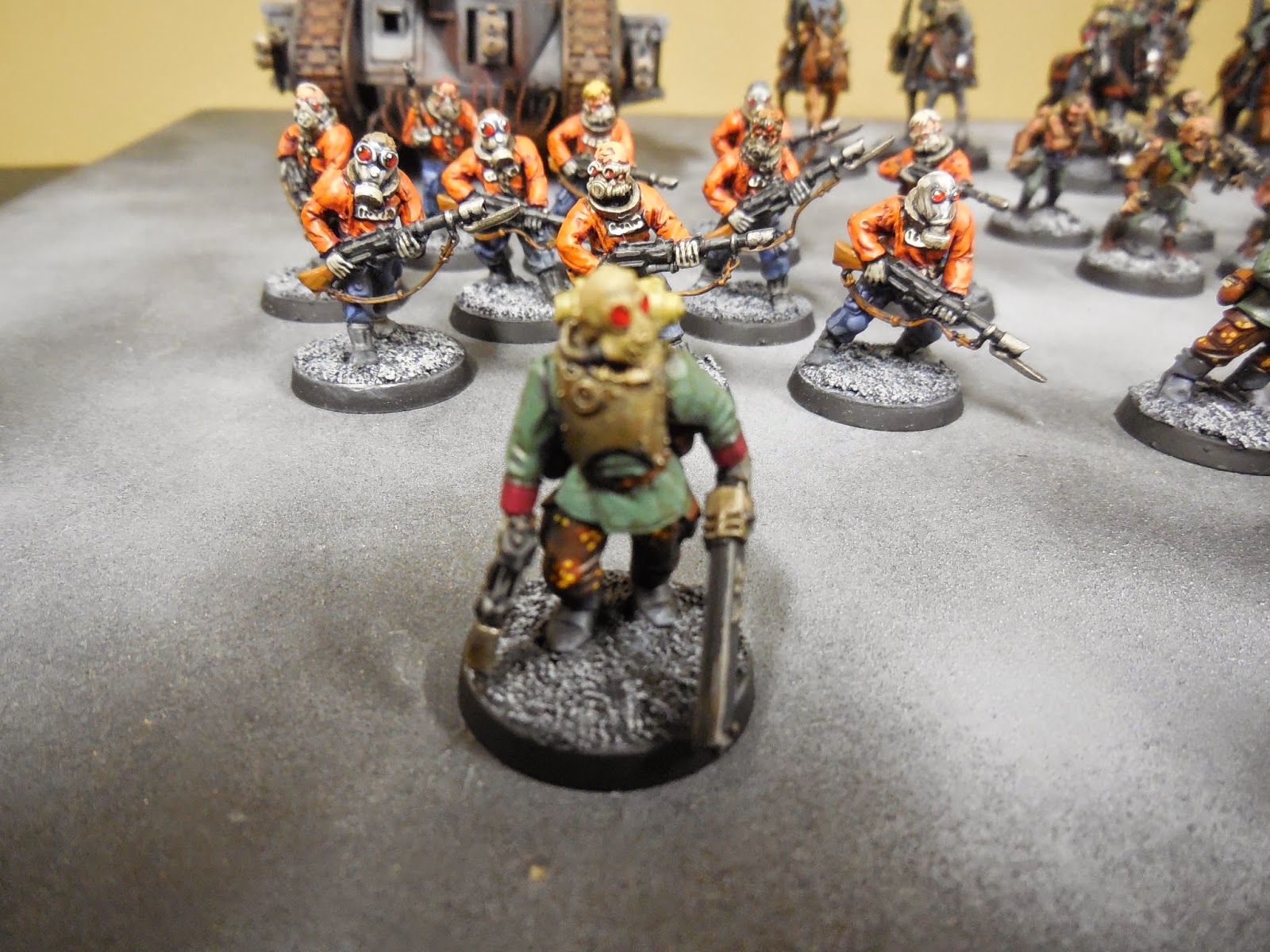 A disgraced junior officer can lead the penal section. 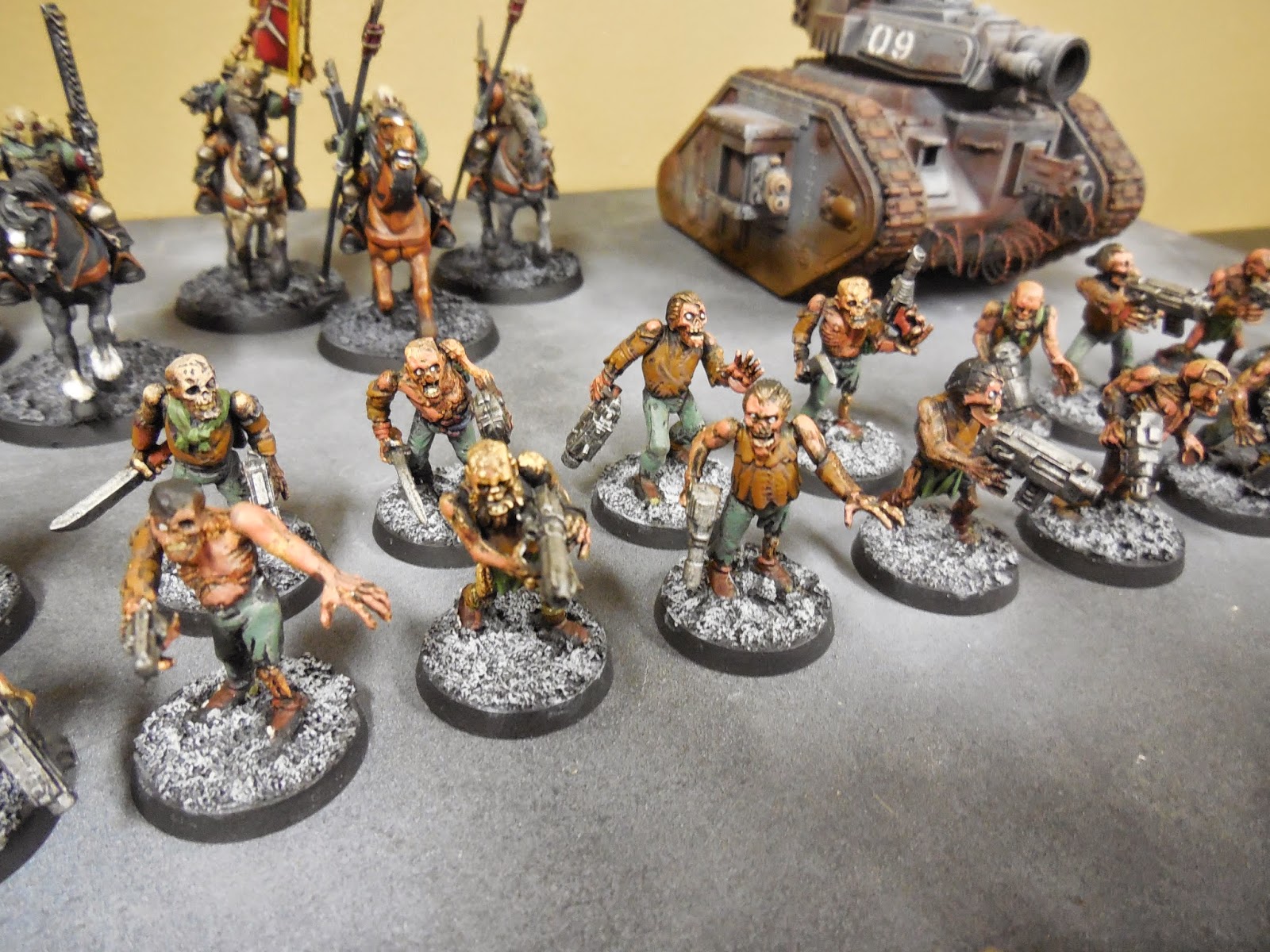 There is a 20-model strong unit of workers/mutant rabble. These are GW Zombies outfitted with random guns and the very off bit of other kit. 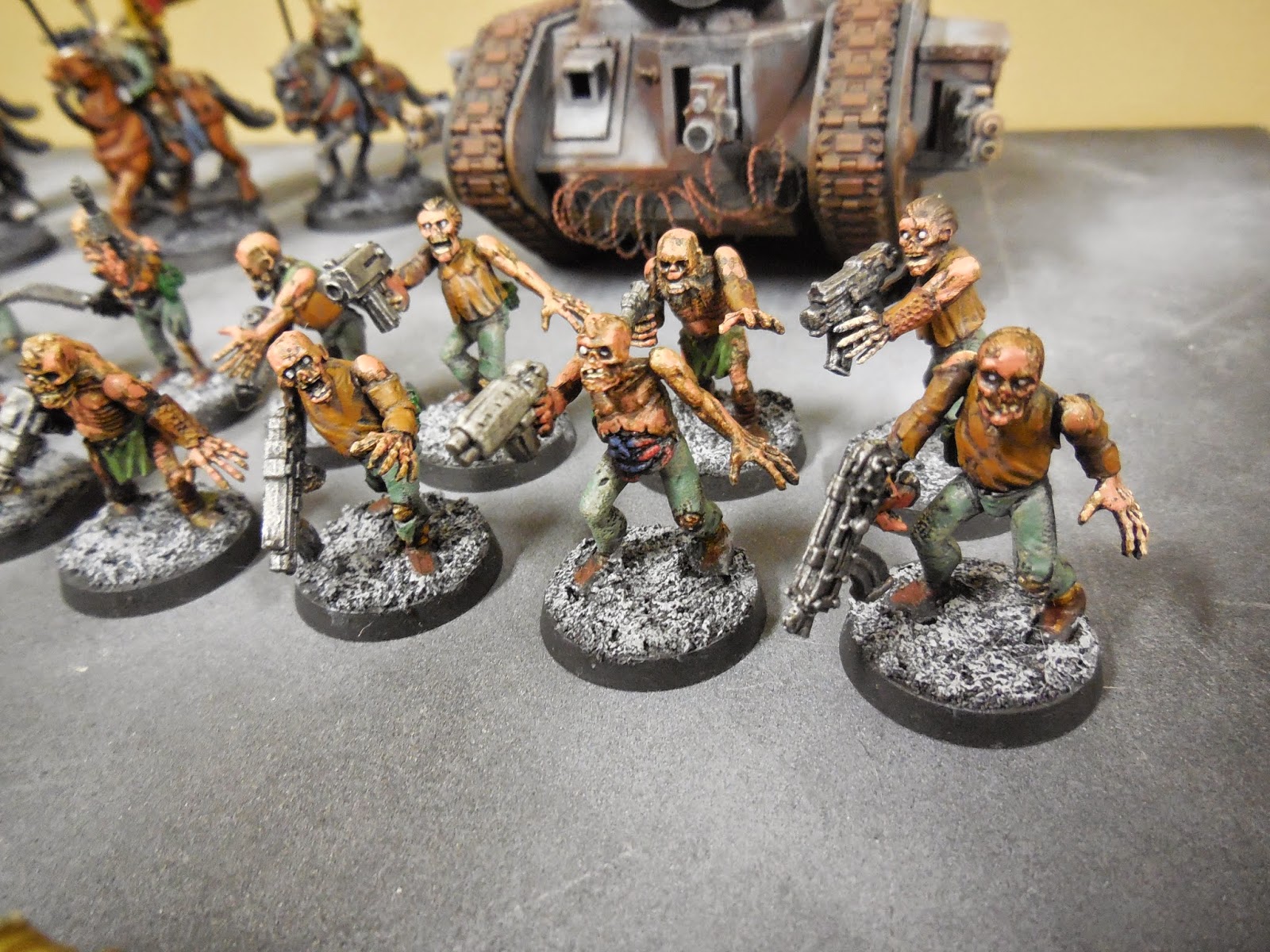 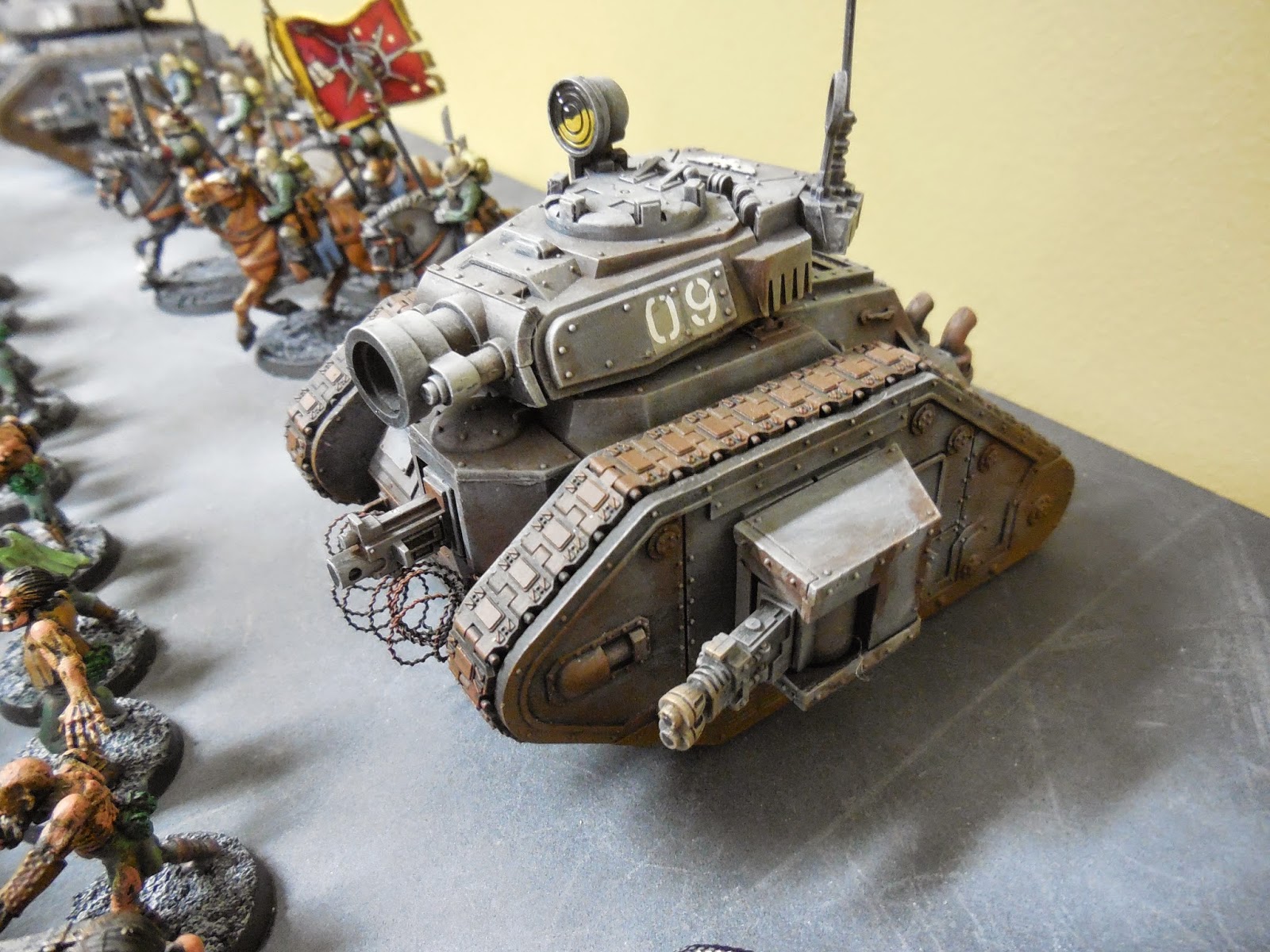 Leman Russ Demolisher. The main gun and sponsons are magnetised for easy swaps. 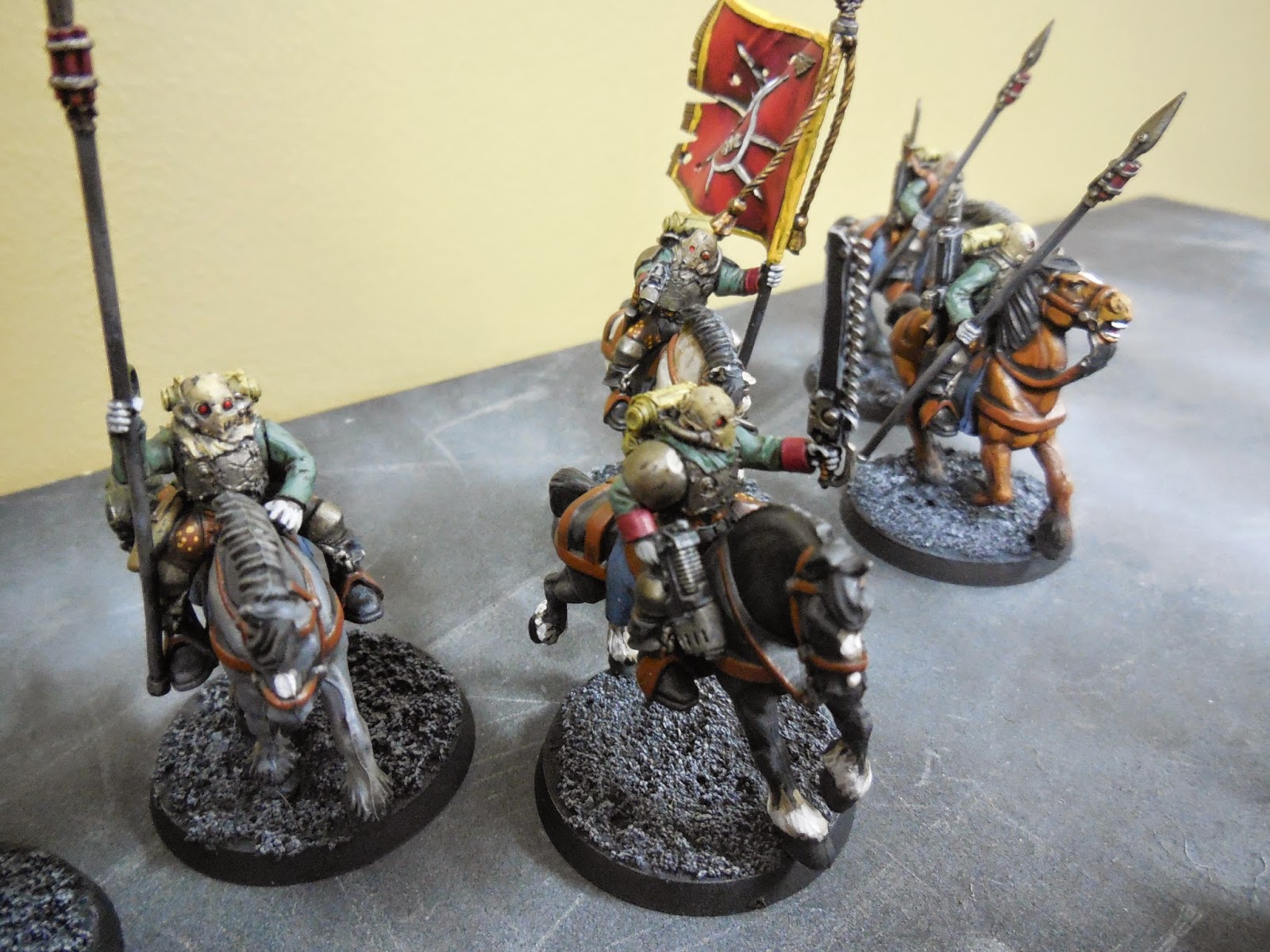 Lastly, the Chaos Death Riders. These guys were fun to paint once I got my head back into "cavalry mode". Horses are GW from the WHFB Empire range. Torsos Forgeworld of course, legs are from WHFB Chaos Marauder cavalry. Some arms are Cadian; the explosive lances and other arms are from Victoria Lamb. 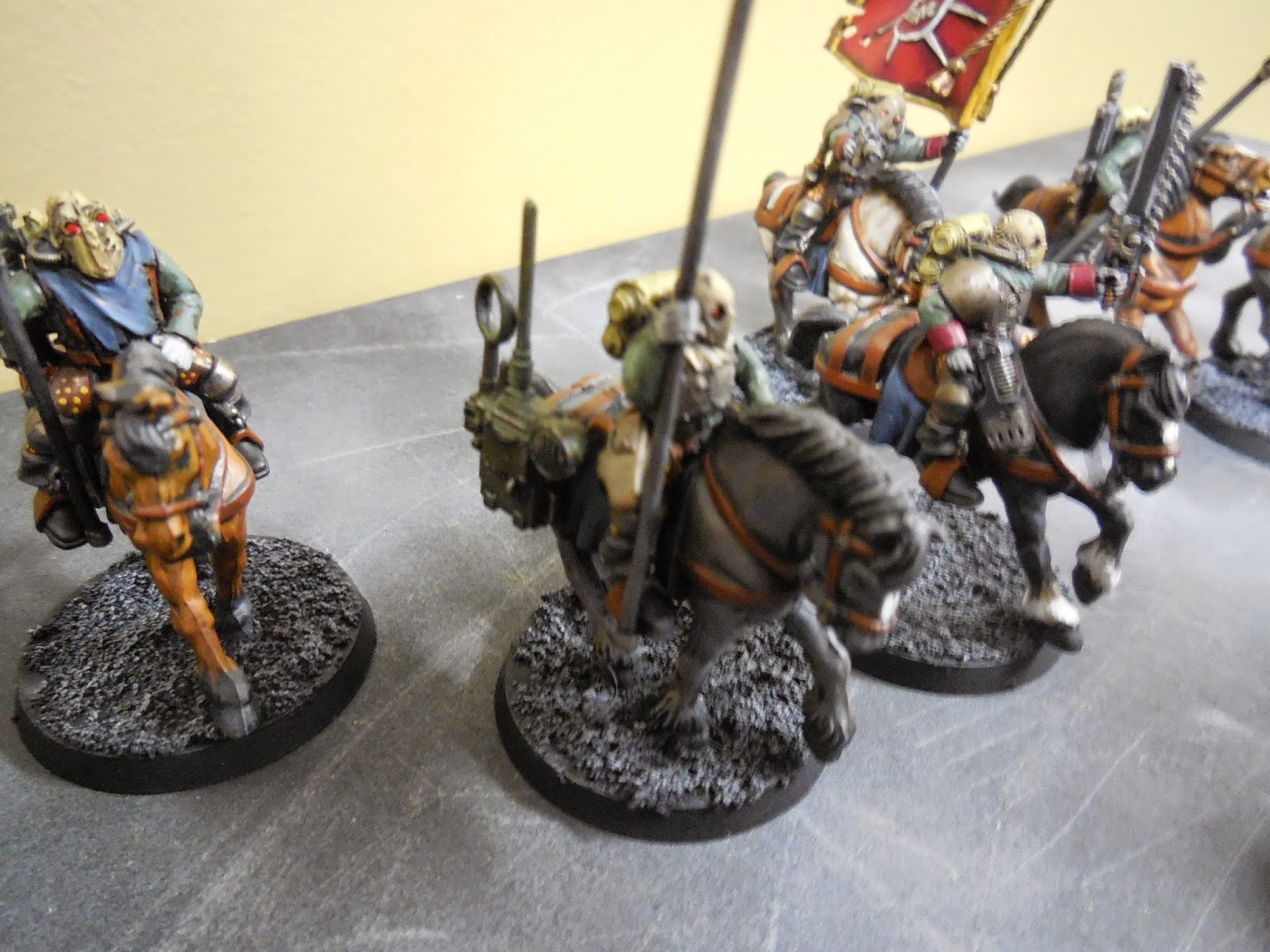 Here's the "musician" with voxcaster ;-)

Well, that's the crew for now. As with everything there's still a bit of an expansion plan. I have enough Forgeworld torsos left to do a heavy weapons section of three weapons and crews, finish out the Death Riders to 10 models, and do a couple vehicle crewmen for a third Leman Russ. There's also 10 more primed penal troopers ready to go. I'll keep chipping away at them but I'm rather pleased with the progress of late. It's always satisfying to get stuff done that's been sitting.

Oh, and they've already seen some action!
Posted by Dallas at 10:18 AM

Great work dude - that is a lovely collection and it was great fun to see them out on the table!

Even more fun to watch Keegan roll radioactively hot and hold them off :)