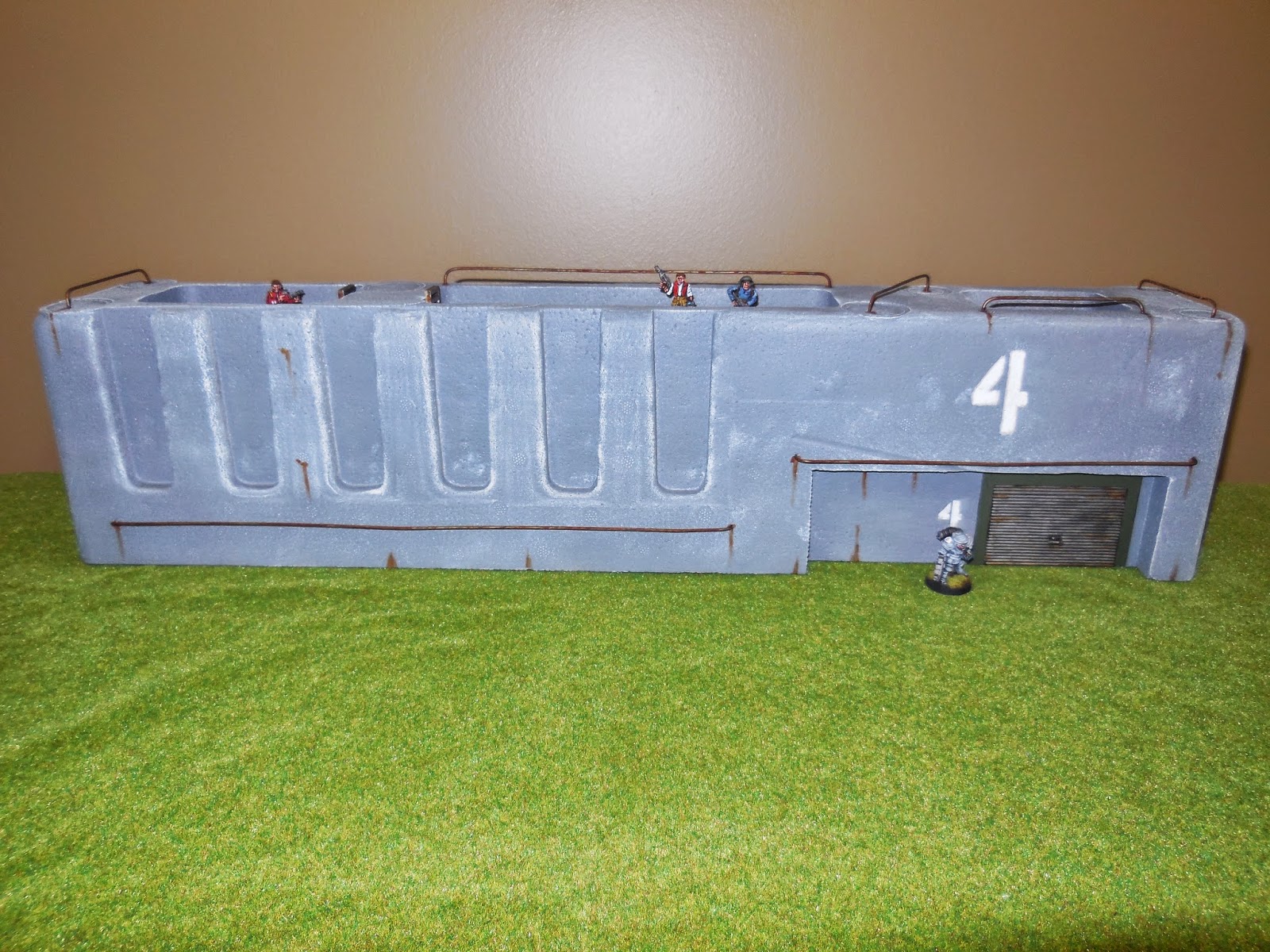 In these strange days of multi-hundred dollar plastic building kits, I always find it refreshing (and economical) to make something out of found objects. In this case, some very nice packing material from the LED TV set I bought my wife for Christmas this year.

One of the daunting things about these large terrain projects is how to paint them. Every hobbyist learns early in their career that regular spray pain dissolves foam, but brush painting these huge pieces is time consuming and takes a ton of paint.

In the past I've used "stone-effect" water-based spray paint to reasonable effect, but when I was in the GW store a couple weeks ago I spotted a can of something called "Roughcoat" in the paint lockup. When I asked Redshirt Mark about it he explained that it was textured spray paint and was supposedly safe for foam. After some Internet investigation ("trust... but verify") I decided to use it for this project.

It worked reasonably well. While the texturing effect was pretty minimal (I'd hoped for a rougher concrete effect) the spray didn't melt the foam, and was easy to use. I count that as a win, but at $20 a can, next time I'll hit Canadian Tire and pick up some stone effect stuff. 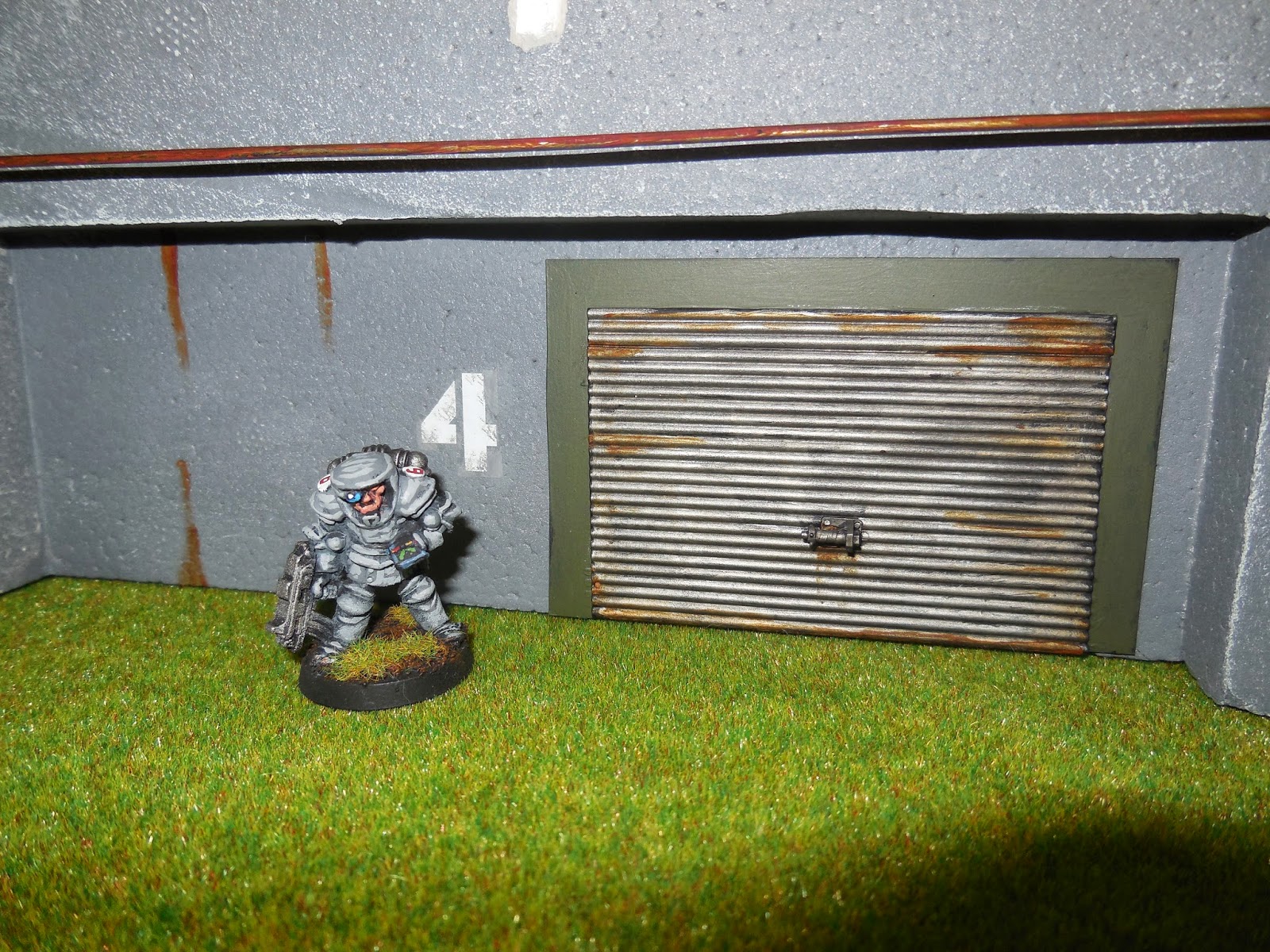 I drybrushed the piece with lighter grey using a large brush, and detailed the rather flat walls with some florist's wire sprayed black, painted GW Leadbelcher (dull silver) and treated with Rust Effects, which was also used on the walls. The roll-up door was made from corrugated plasticard with a spare handle from a Forgeworld kit. The large numeral "4" was freehanded and the small one is a decal from the decal folder. 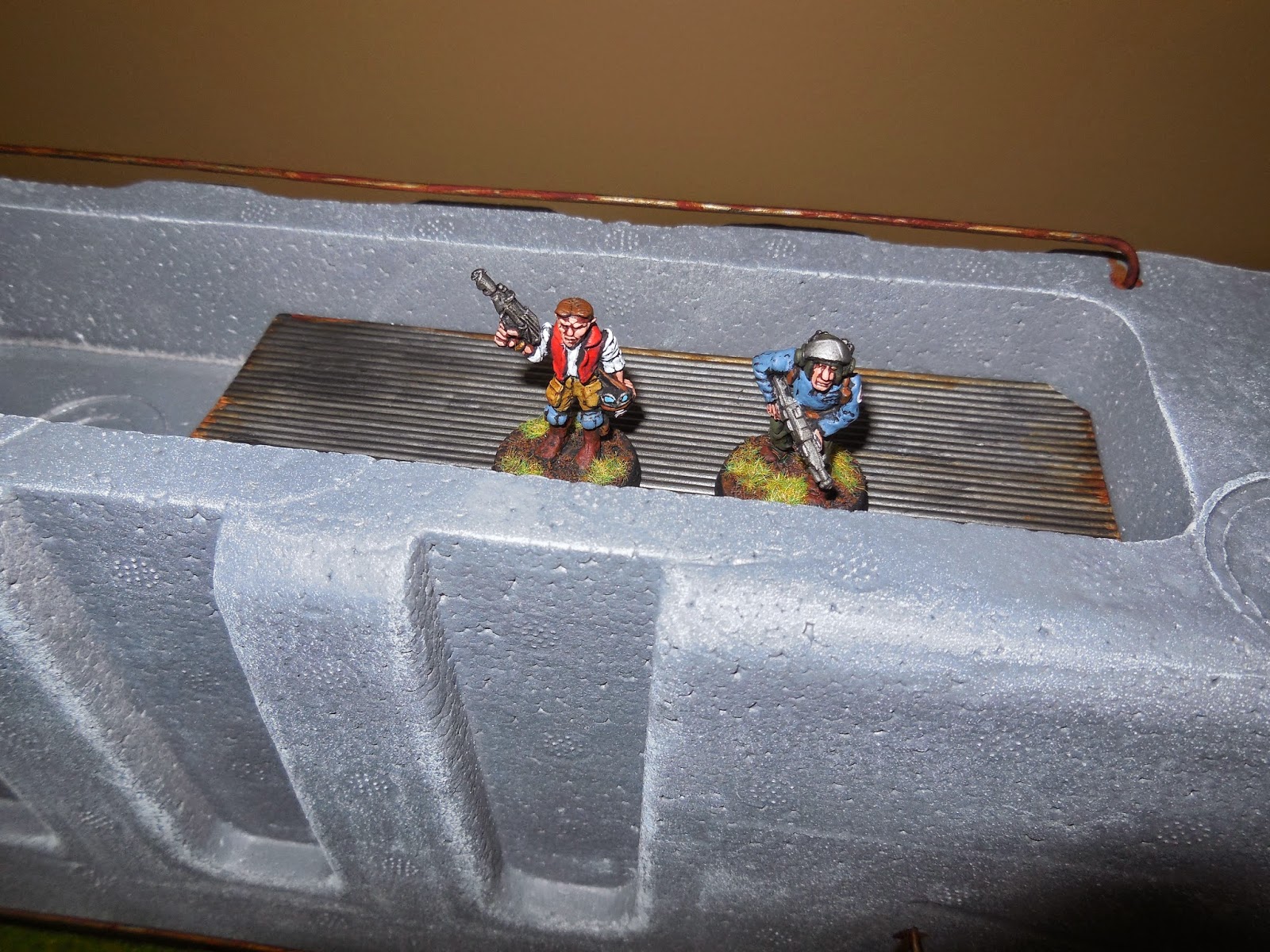 More plasticard was used as floor sections in the upper levels. 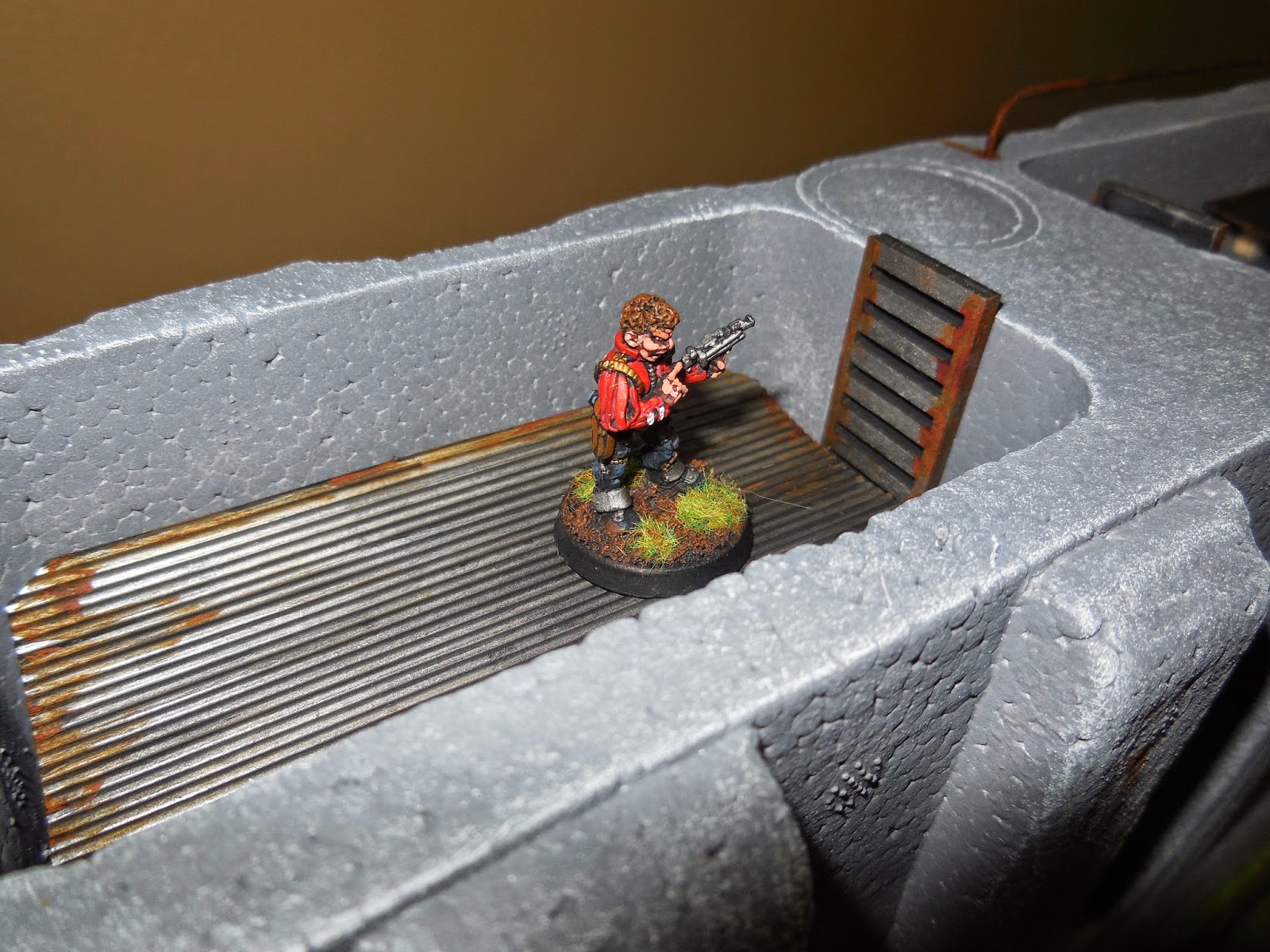 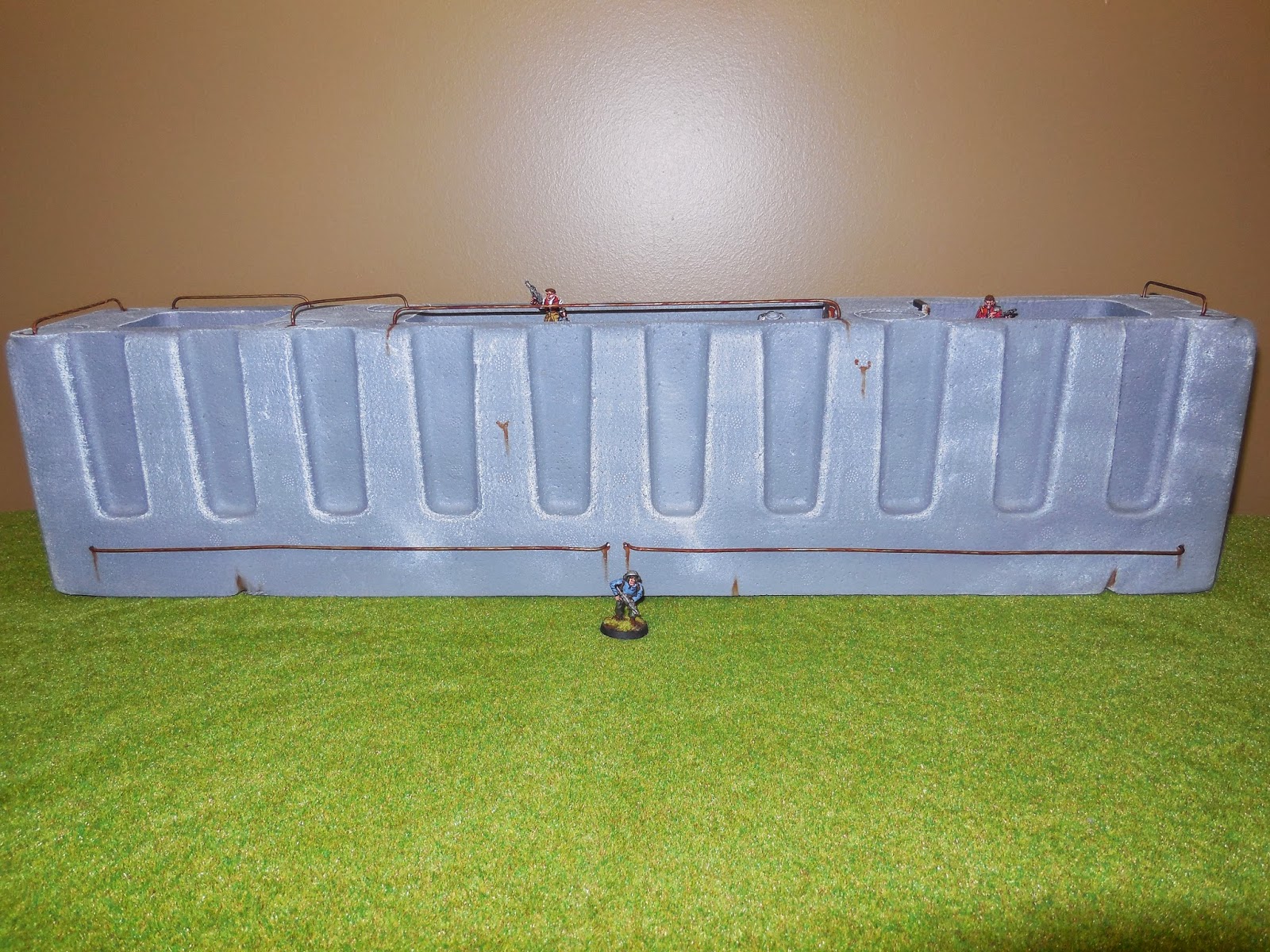 Here's the other side of the piece, with a 28mm Citadel Spacefarer for scale. 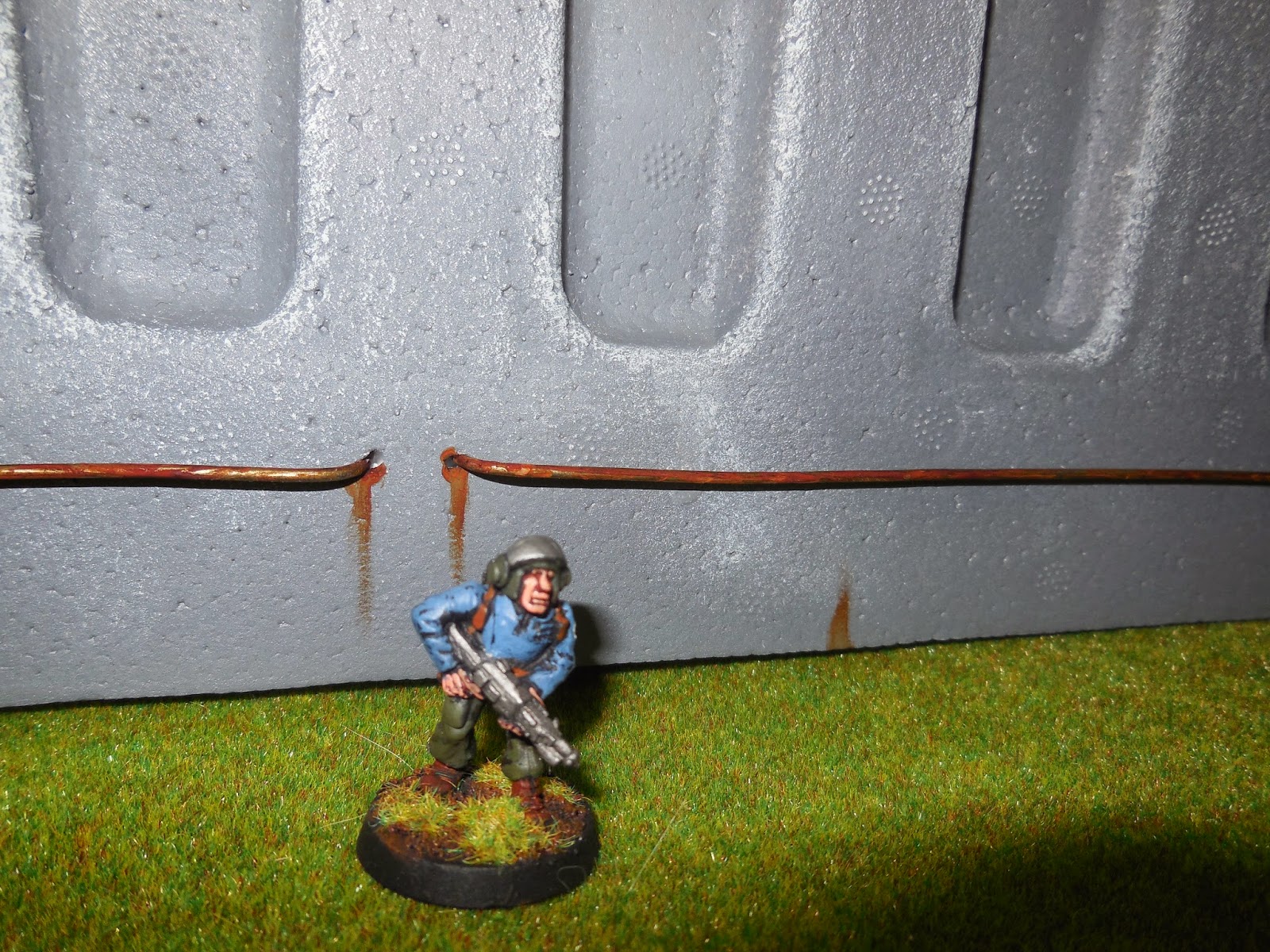 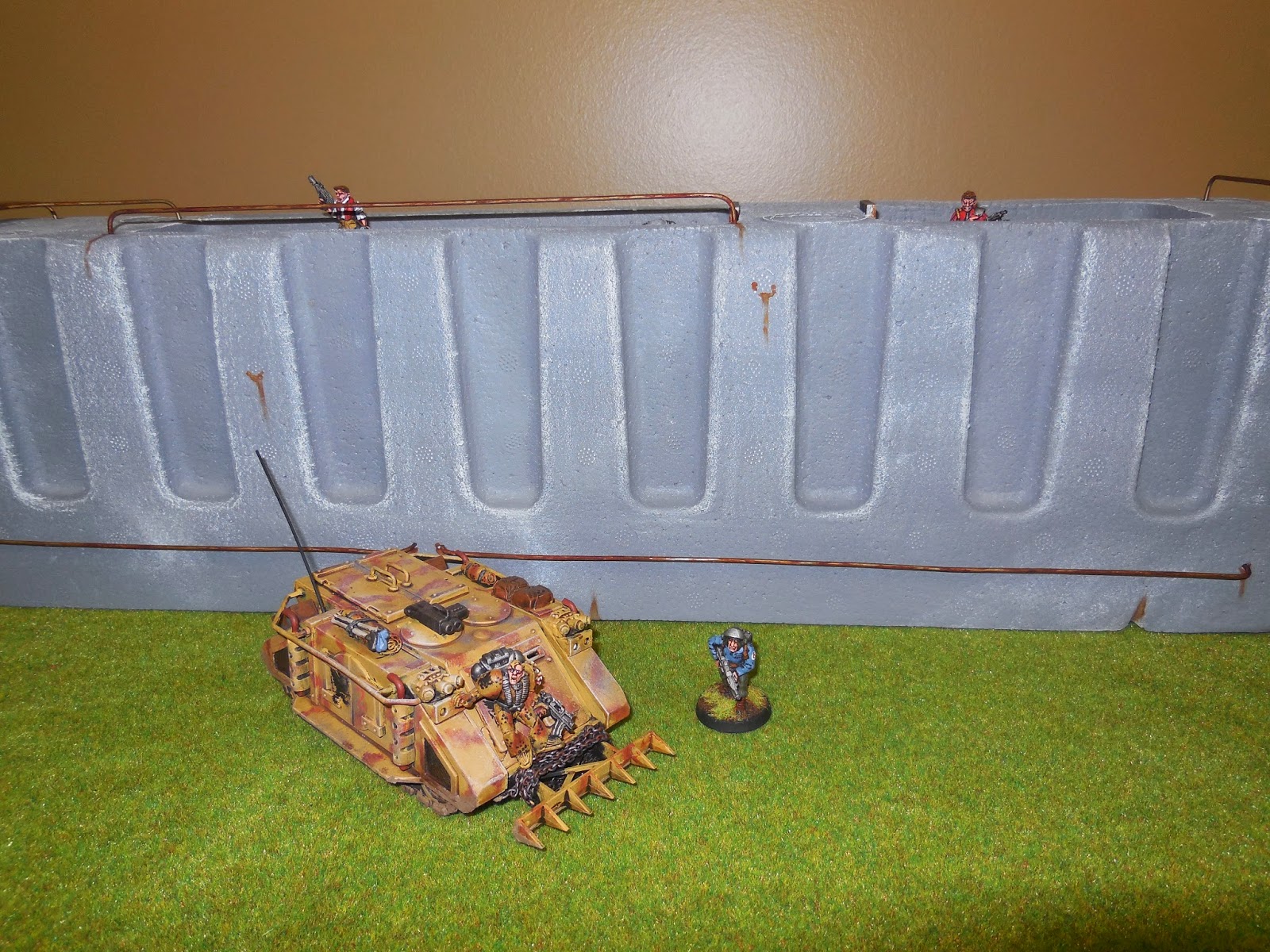 Rhino shows the scale of the piece. 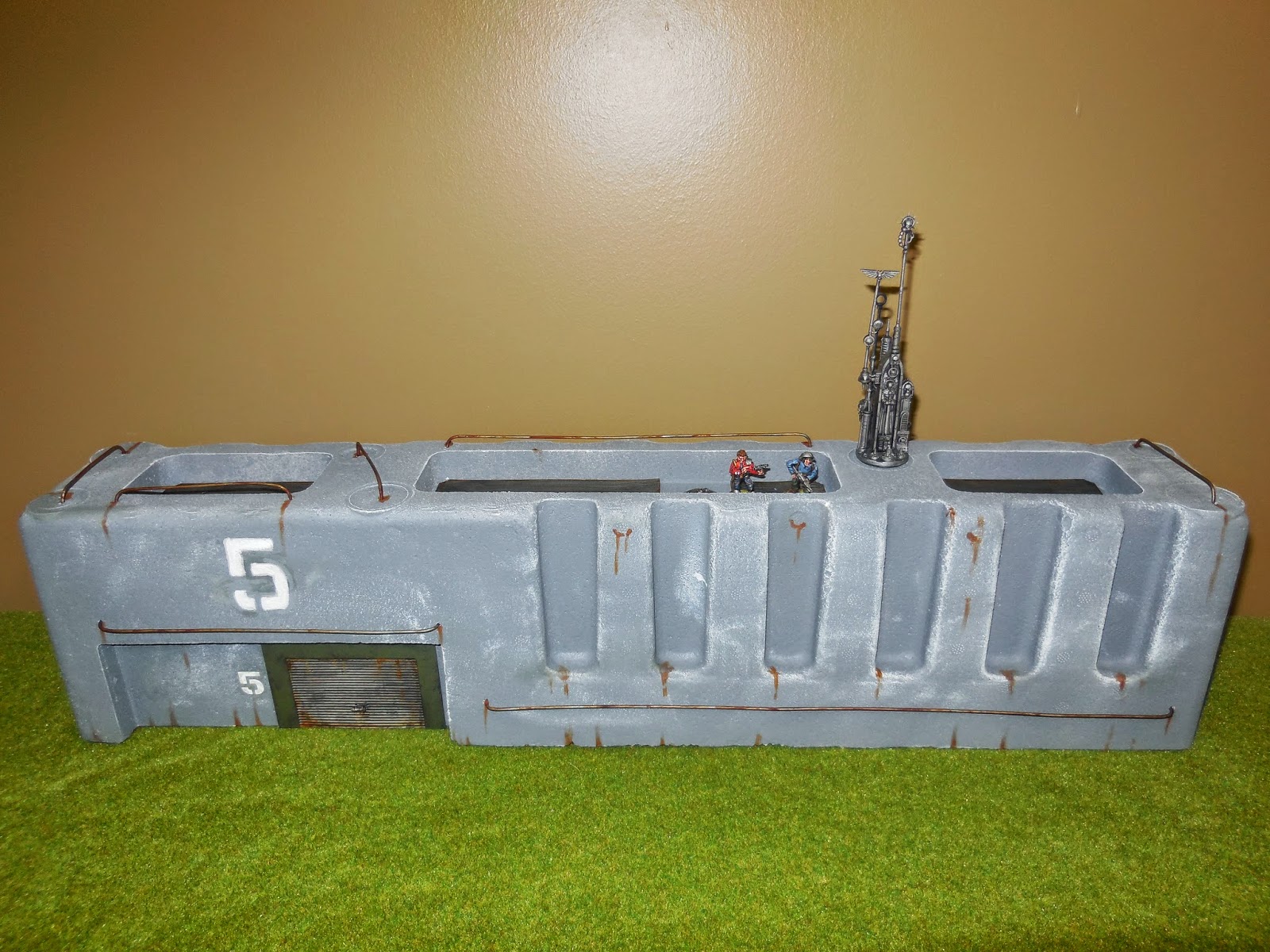 But wait, there's more! The other end of the TV had its own foam piece too. Identical to the first one, but with shallower indents on top. Again, perfect for 28mm figures. 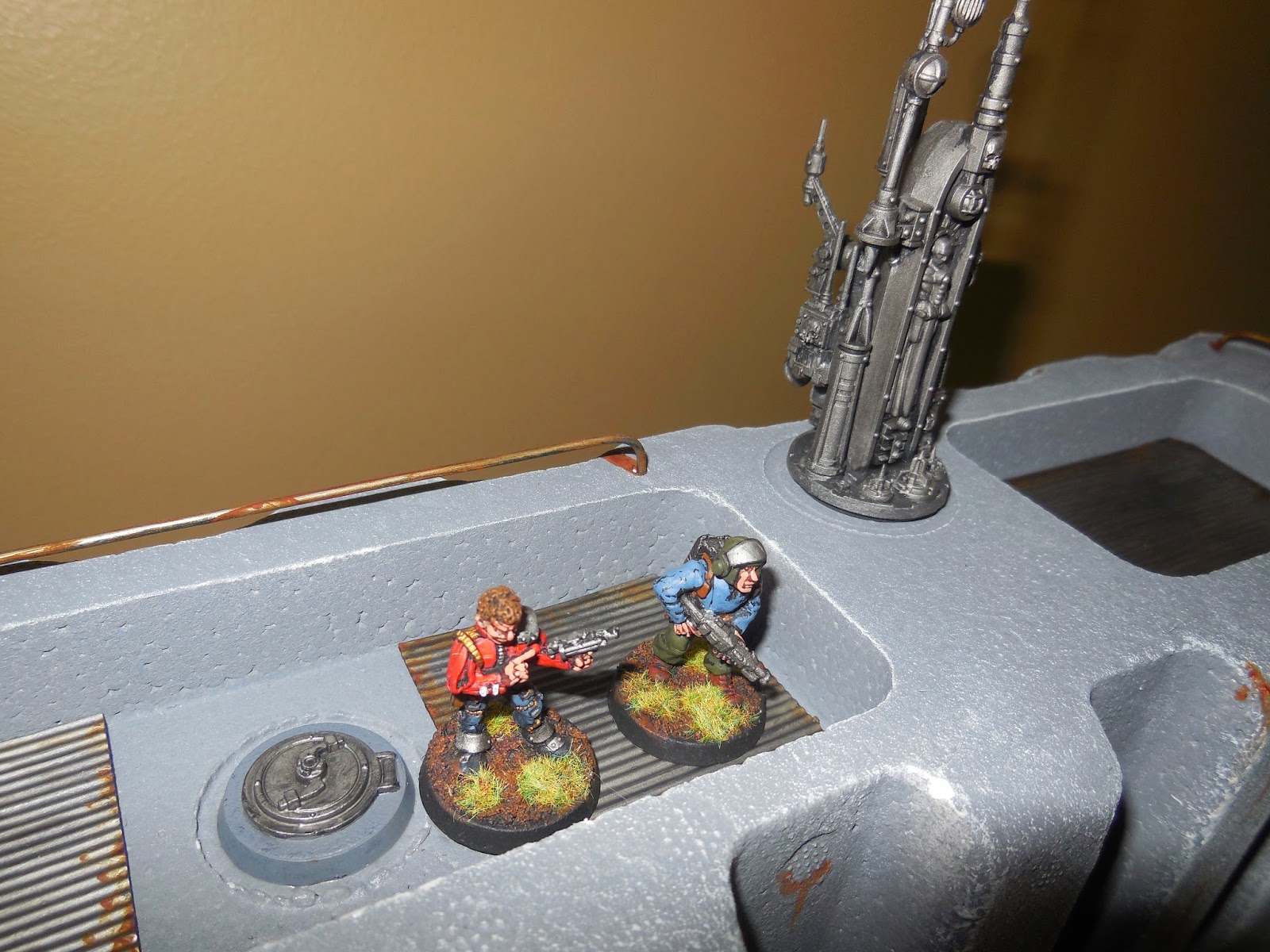 More plasticard flooring and GW comms array. It's not glued down but is there merely for effect. 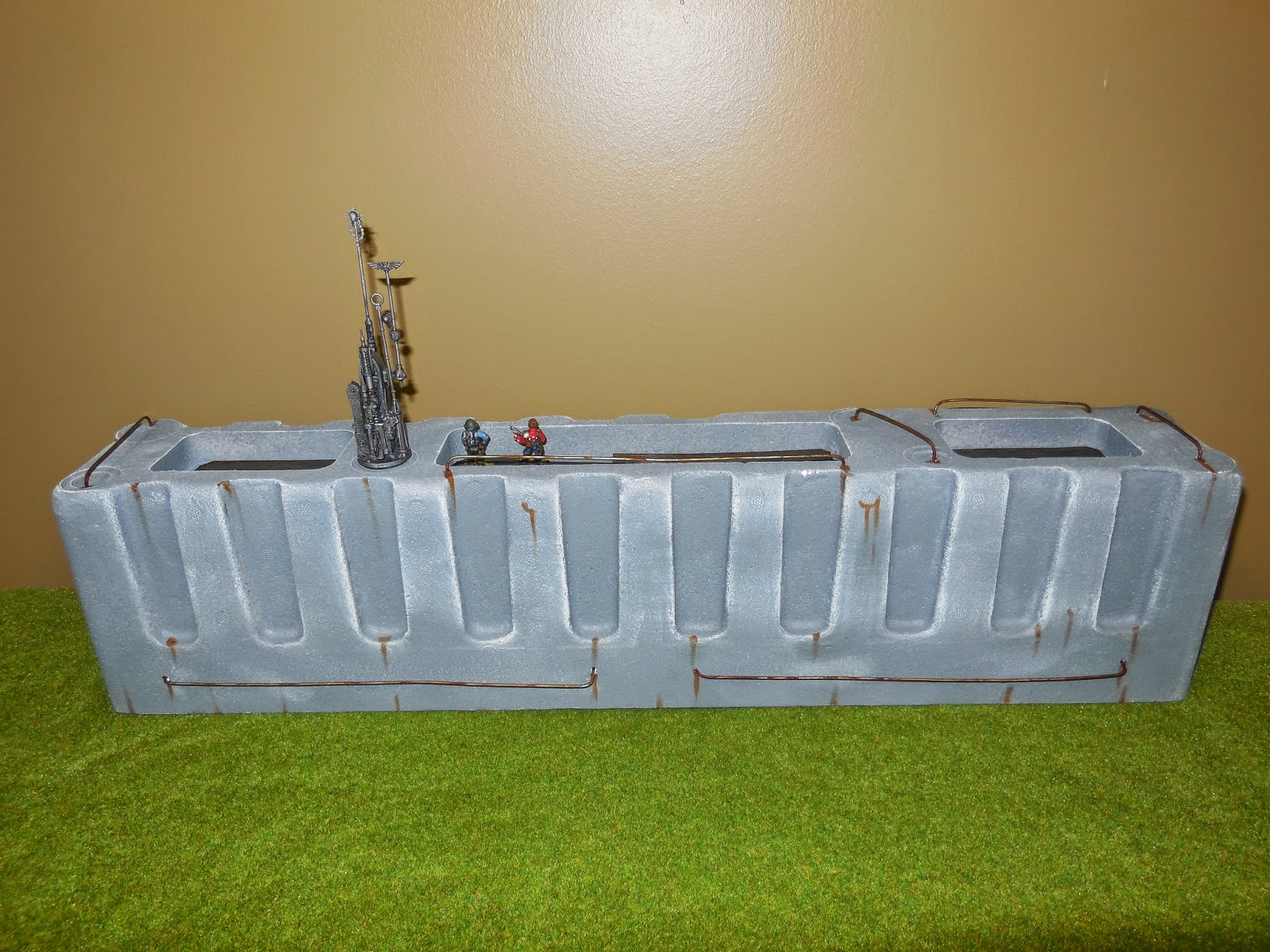 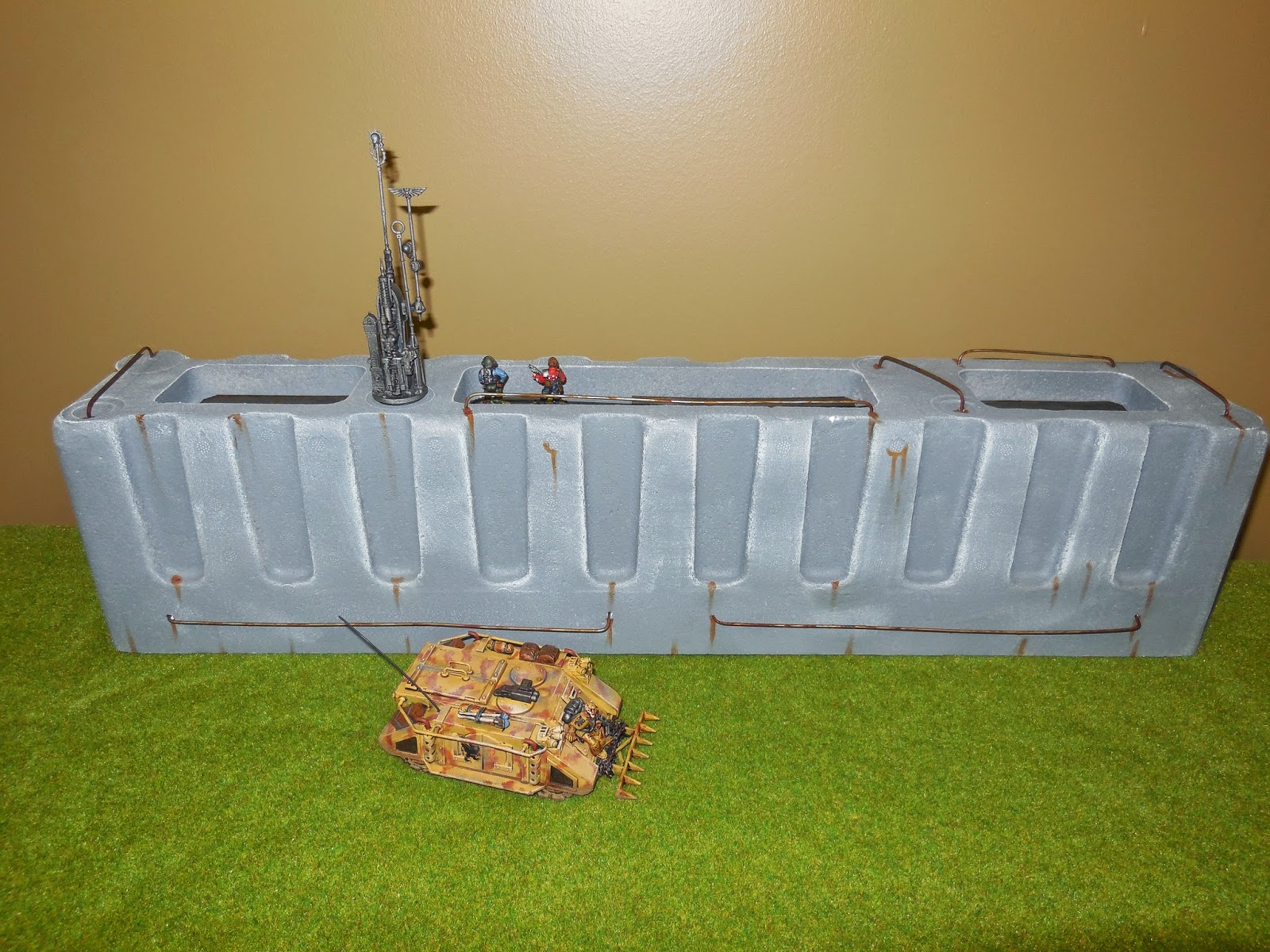 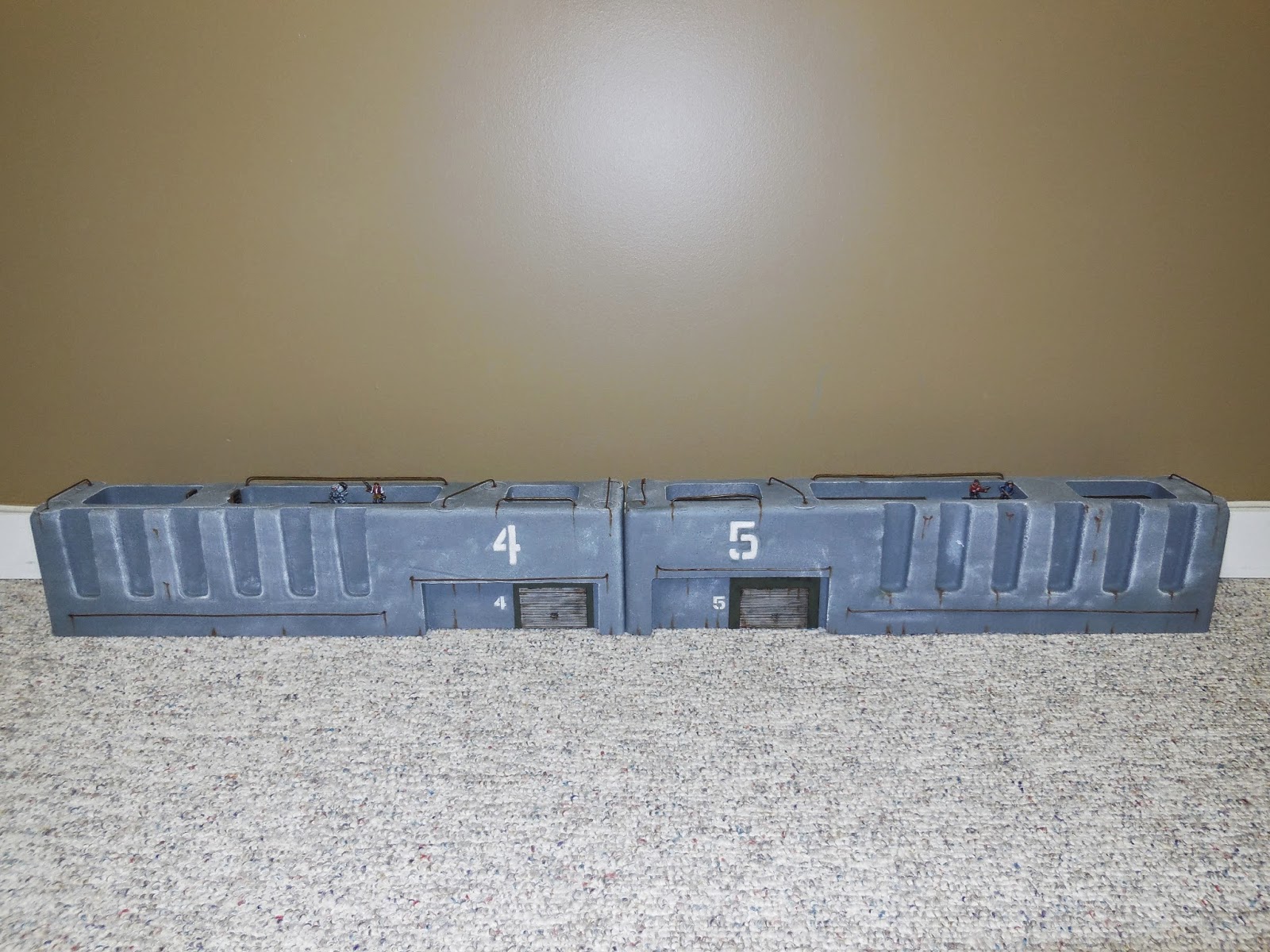 Both pieces pushed together cover about 4 feet - impressive eh? And just the thing for a massive game on an 8x5 table. 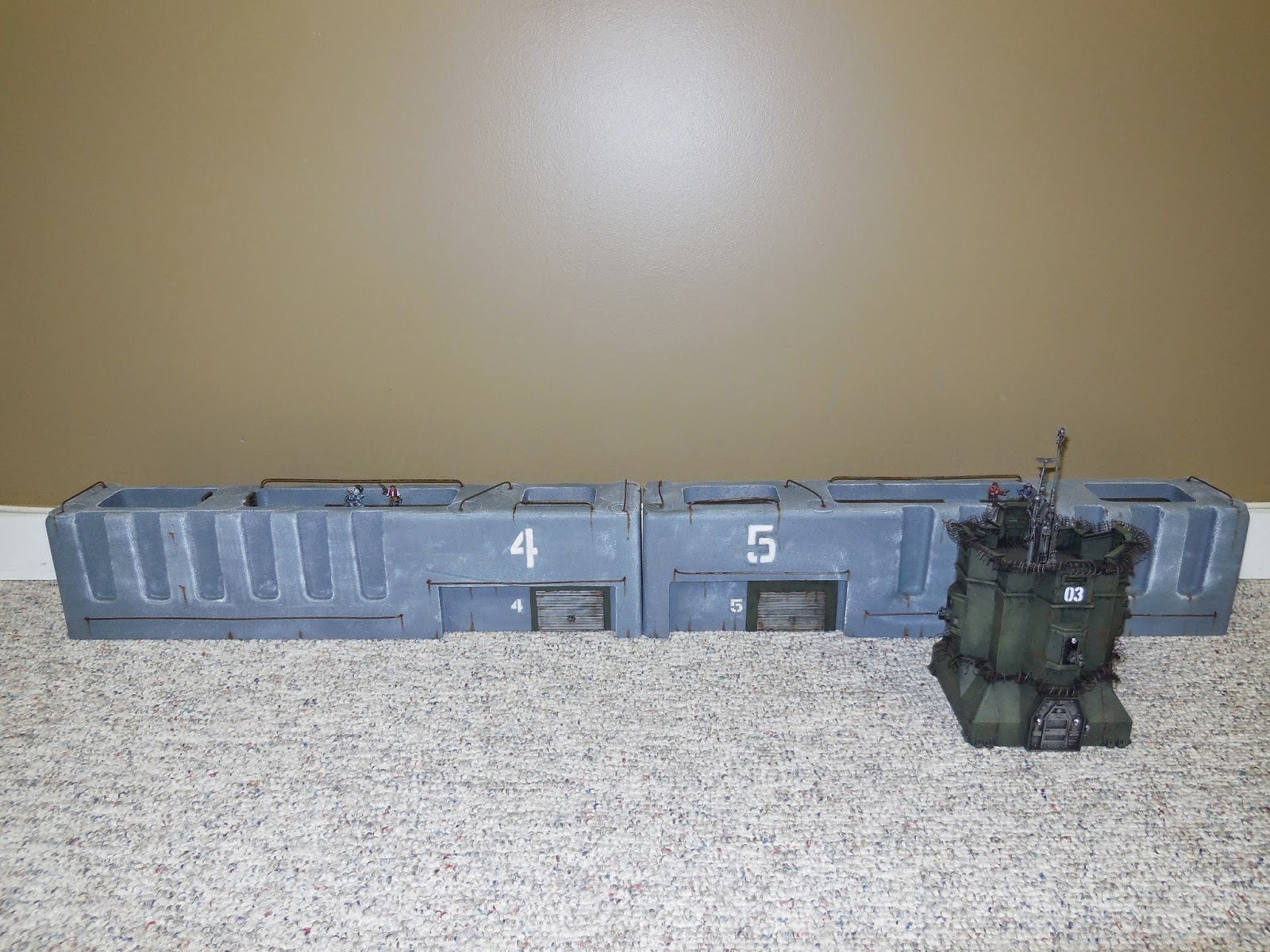 Imperial Bastion to show the scale. 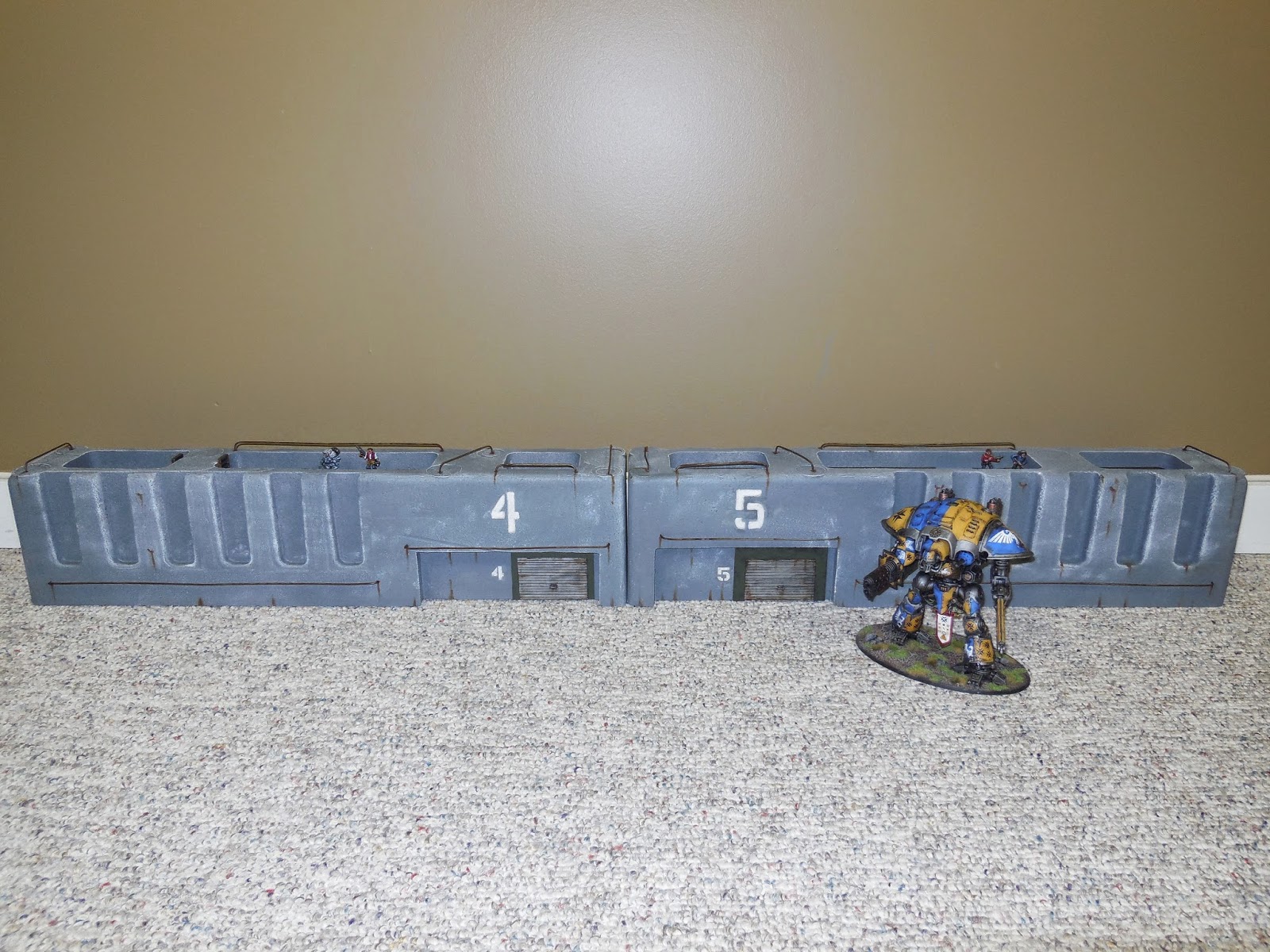 Some great blogging today from the Conscripts!

And, awesome work Dallas! That is really cool. Those buildings have a perfect sci-fi look - nominally useful and harmless from the outside, but likely home to something awful...great work.

Those turned out great, Dallas!

Thanks guys. Kev, you're right. I did note in the original post that I'll be going to CT for this stuff next time. I wanted to try the GW product for the finer texture, but it was so fine it's practically invisible!