From my practice games, my general plan was to set up 6 TIE Fighters in formation in whichever corner granted me the most maneuvering room, and to deploy Soontir Fel in the opposite corner, facing in diagonally.

My TIE swarm is seen below deployed across the table from Jer's elite Darth Vader flight. 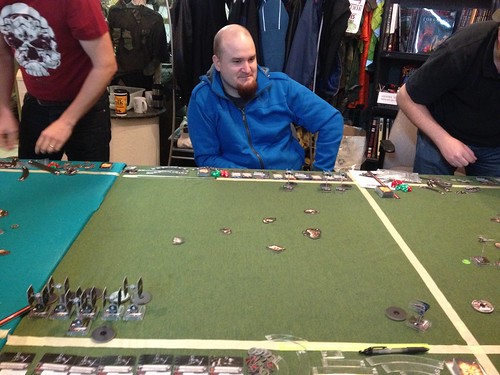 After a lot of maneuvering and dancing around, the swarm got Darth Vader in their sights and shot him down, garnering me a modified match win. 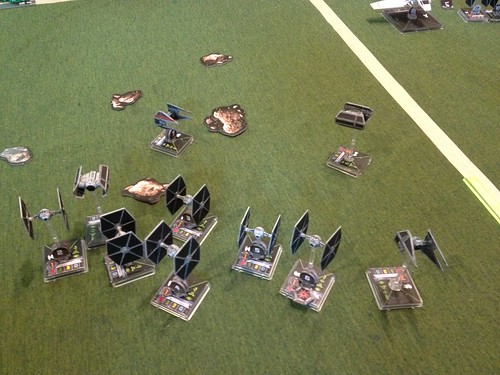 I faced off against Ian's TIE swarm led by Darth Vader in a shuttle. As the game opened, I pushed Fel too far ahead of his squadron. Below, Ian's ships  blast Soontir Fel out of the sky. 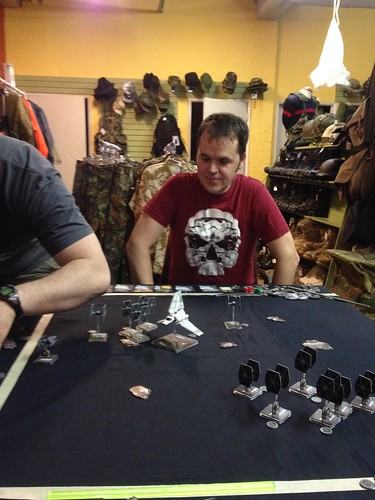 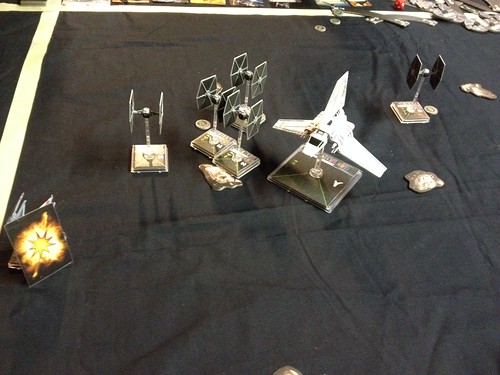 The rest of my TIE swarm was a turn too late to help, but were in a good position to attack Vader's ship next turn.

Below, furious action as Darth Vader's shuttle finally goes down. That guy force-choked my pilots from his bridge! 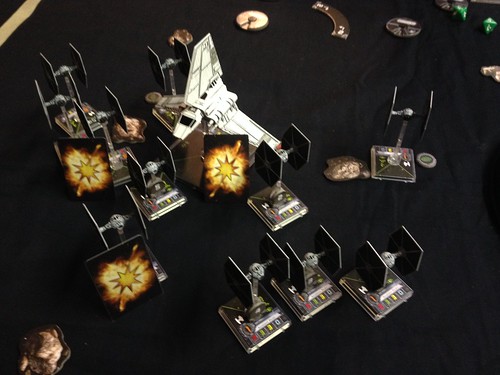 The destruction of Darth Vader and some opposing TIE fighters was enough to grant me a modified match win.

Matt's elite team of Soontir Fel and Darth Vader (armed with Assault Missiles!) forced me to spread out the TIE formation. 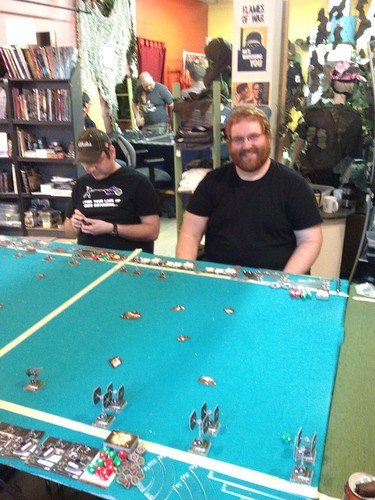 Matt's Soontir Fel (talk about Clone Wars!) was nailed by a lucky close range shot from one of my TIE Fighters. 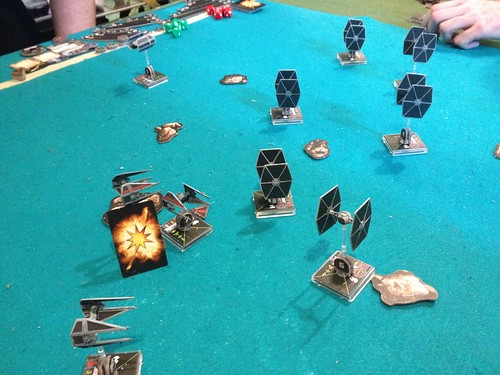 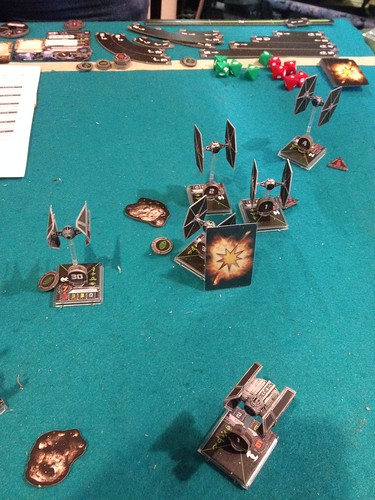 Darth Vader never got off a shot. I shot down Matt's Fel; since my force lost only a TIE Fighter in return, I managed to eek out another modified match win 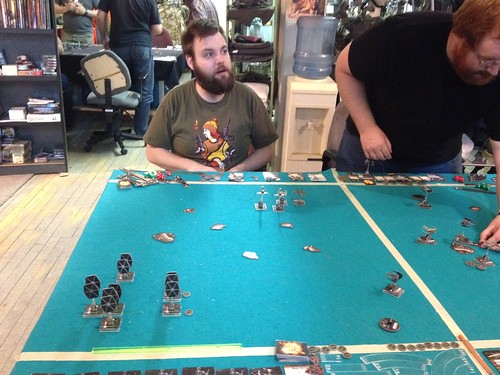 I made a fundamental error and moved towards the centre. I should have stayed on the left flank of the asteroid field and forced the Rebels to come to me. 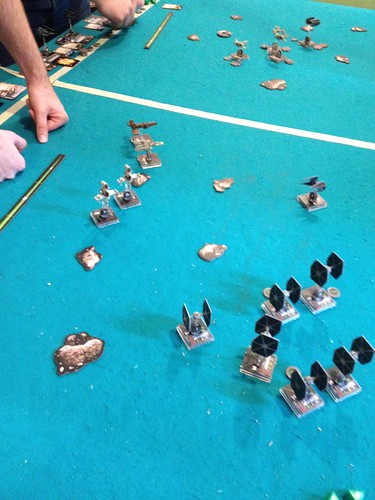 I made another error by moving a couple of TIEs too fast and running into an asteroid! Below, Soontir Fel goes down to a 5-dice (!) volley from a B-Wing. Jan Ors granted the B-Wing an extra attack dice; it's a very good backfield ship and pilot. 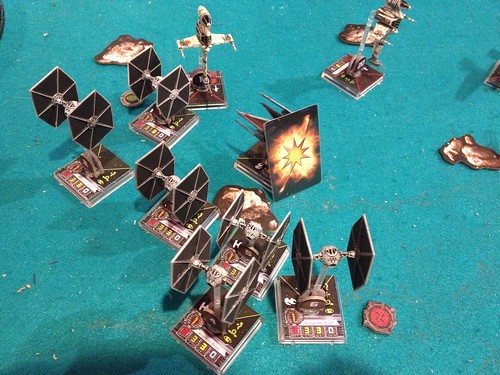 I managed to nail the heavy-armed B-Wing, but it was too little, too late. Ian  ion-cannoned more of my TIE fighters into asteroids, granting him the match win! 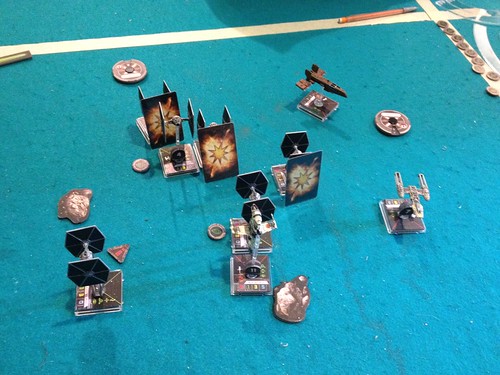 Many thanks to Perry and Imagine Games and Hobbies for organizing and hosting the event. Congrats to Conscript Byron (fielding 2 B-Wings and 2 X-Wings) and to Chris (ETA: Chewbacca in the Millennium Falcon w/ a Gunner, and 2 x Blue Sqdn.  B-Wings ea. w/ Fire Control Systems) for winning 1st and 2nd place!

Note: Chris posted his own report for the tournament, located here.

I found running 7 ships mentally exhausting. However, the firepower of all those ships can be very effective. One objective seemed to be to keep them together as best as I could. Making the other guy move through the asteroid field is also key; in my last game the asteroids did as much damage to my ships as Ty's guns!

TheMetalBikini.com posted some very informative articles about moving in formation. It's a three-part series: Part 1, Part 2, and Part 3.

A few days after the tournament, FFG changed the tournament rules. Version 1.5.2 of these rules are posted here: http://www.fantasyflightgames.com/ffg_content/x-wing/support/faq/X-Wing-Tournament-Rules.pdf

Interestingly, the differential required for a full match win has been reduced from 33 points to only 12 points, the cost of a single Academy Pilot TIE Fighter. This could be both good and bad for the TIE swarm as a concept. Conscript Kevin has stated that firepower is important; he has been recently play-testing a swarm consisting of 6 named TIE Fighter pilots (Howlrunner, Mauler Mithel, Dark Curse, Backstabber, Winged Gundark, and Night Beast). At the tournament, IIRC I fielded the largest force, with 7 ships. The majority of the Galactic Empire players seemed to be running elite 4-ships lists.

I am jonesing to try out one of the following lists, since I am a big fan of both the Millennium Falcon (my all-time favourite sci-fi ship) and Chewbacca:

It was a fun time for sure. My first couple of games (the tournament) really got me excited about the game.

My let the wookie win list was a lot of fun and now that I've seen the game play out I can make some adjustments to it. It had two b wings with fire control systems, which I liked but I'd alter what Chewie had for sure next time.

We'll have to get in a game some time Dave, so you can show me how to fly a formation.

Chris, I edited my post to add some links on formations, movement, and placement.

A ganme would be great! Aside from my own Chewie lists, the force I originally tested for the tournament (but couldn't use since the Imperial Aces rules were not legal yet) is as follows:
Soontir Fel — TIE Interceptor (27)
6 x Academy Pilot — TIE Fighter (72)

I put together an imperial list after the event. A lot of players there told me only tie fighter swarms were viable. So I made a tie bomber list. It up on the blog but I think it's what I'll run for he next little bit