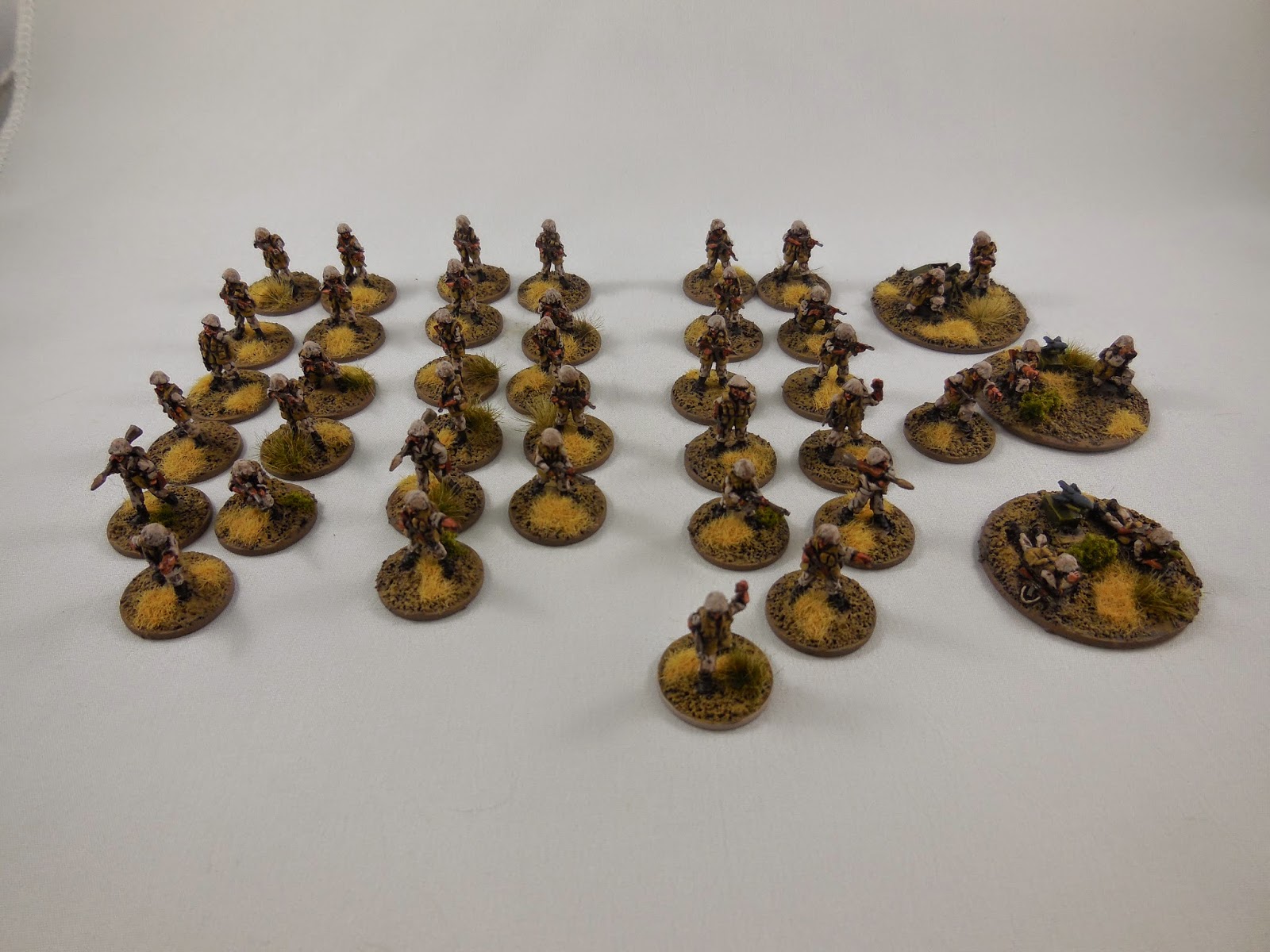 The figures are from Khurasan, and the platoon is organized per the excellent information on the Khurasan website. Two sections of eleven men including one RPG, one RPD, and squad leader with Port Said SMG; one section organized the same way adding the platoon commander; and a support element of two Sagger teams and a mortar. The way the Khurasan packs worked out I ended up with three extra figures: one leader-type, an RPD gunner and a guy toting an RPG. Not bad. 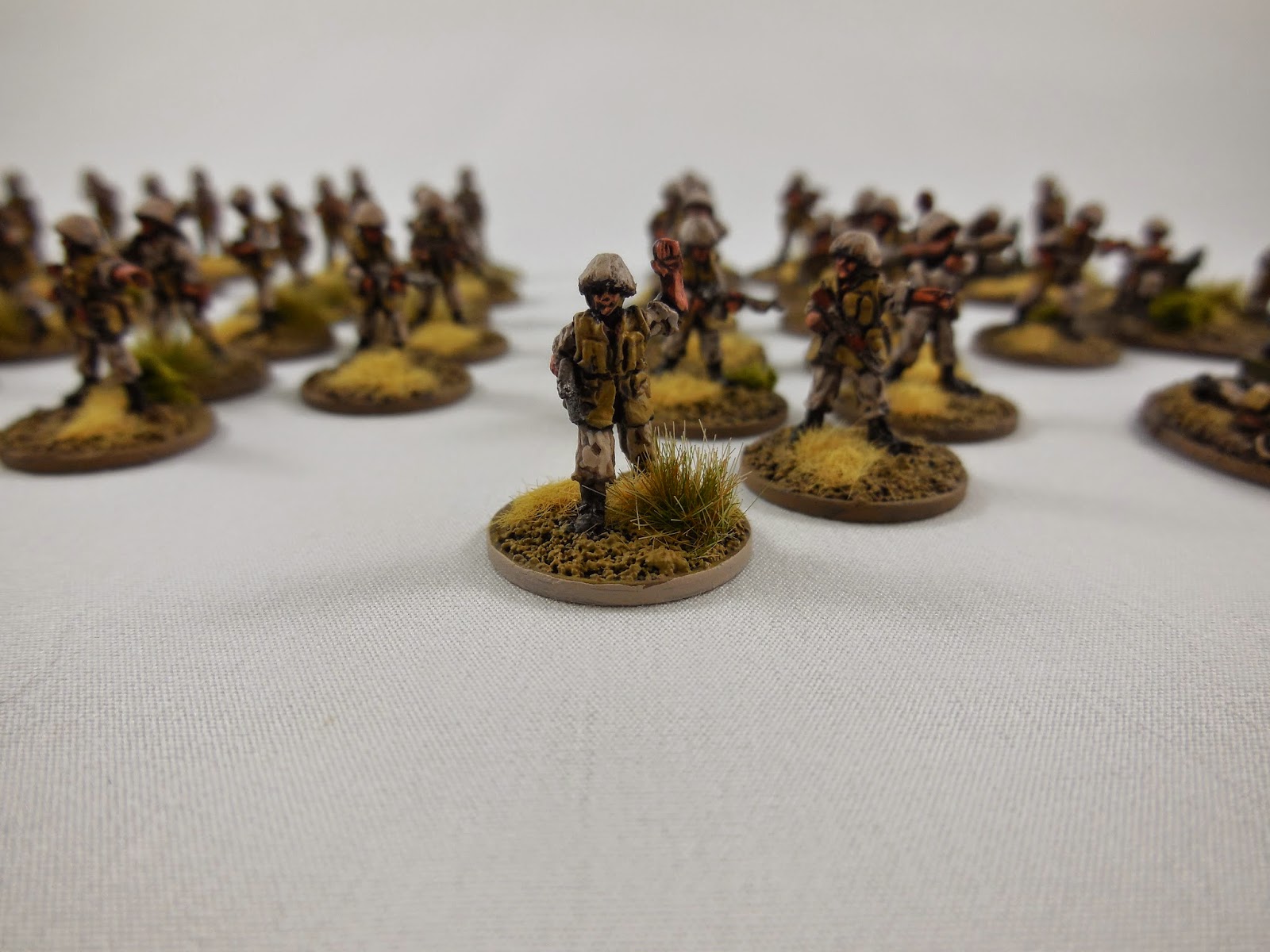 The figures are excellent - just as you'd expect from Khurasan. Most of them (in fact all except the RPG gunners) are wearing the unique "assault vest" favoured by the Egyptian frontline troops in the YKW. 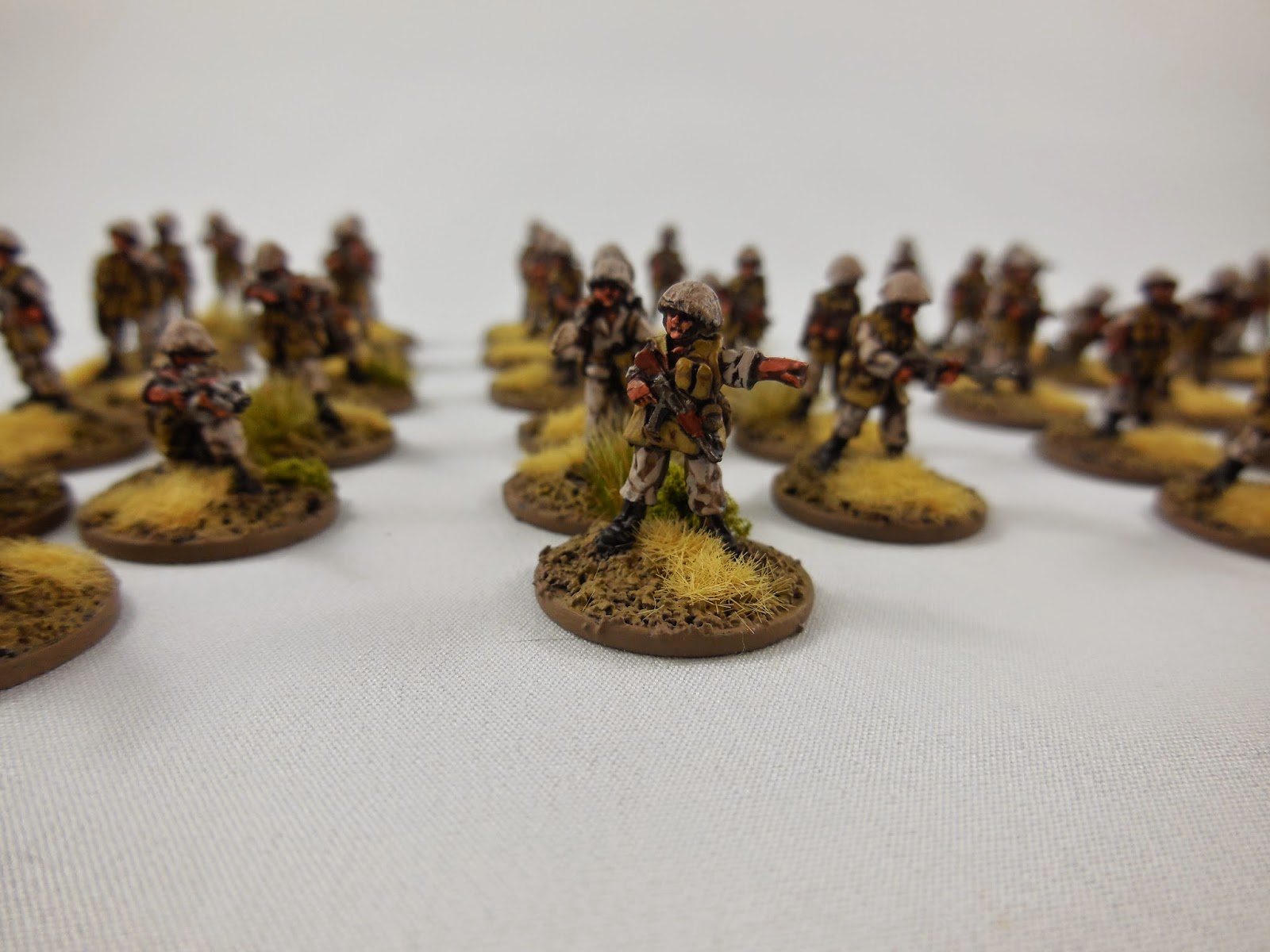 The troops also feature a good mix of poses. There are several obvious leader-types and lots of guys at the ready or firing their AK-47s. 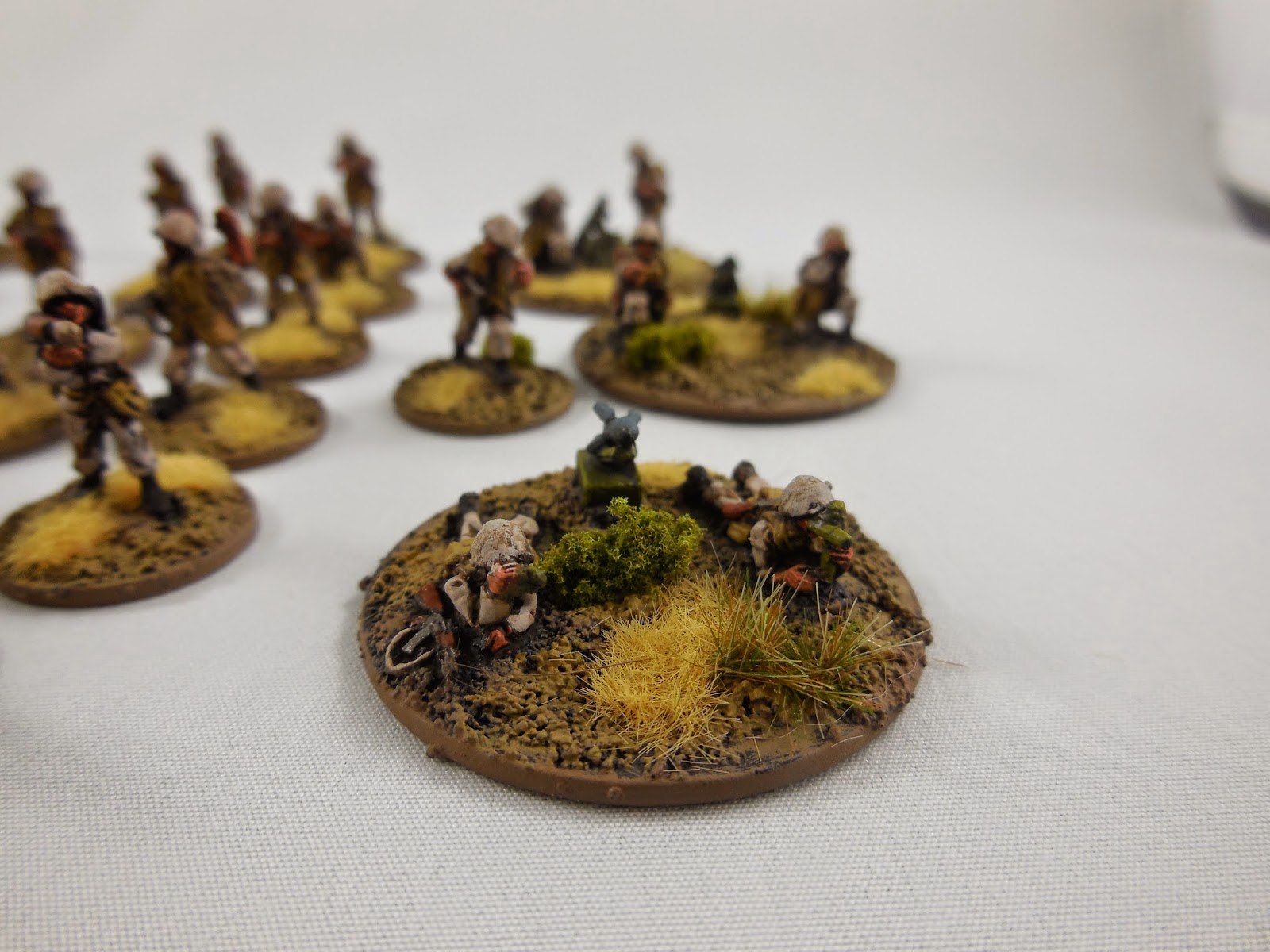 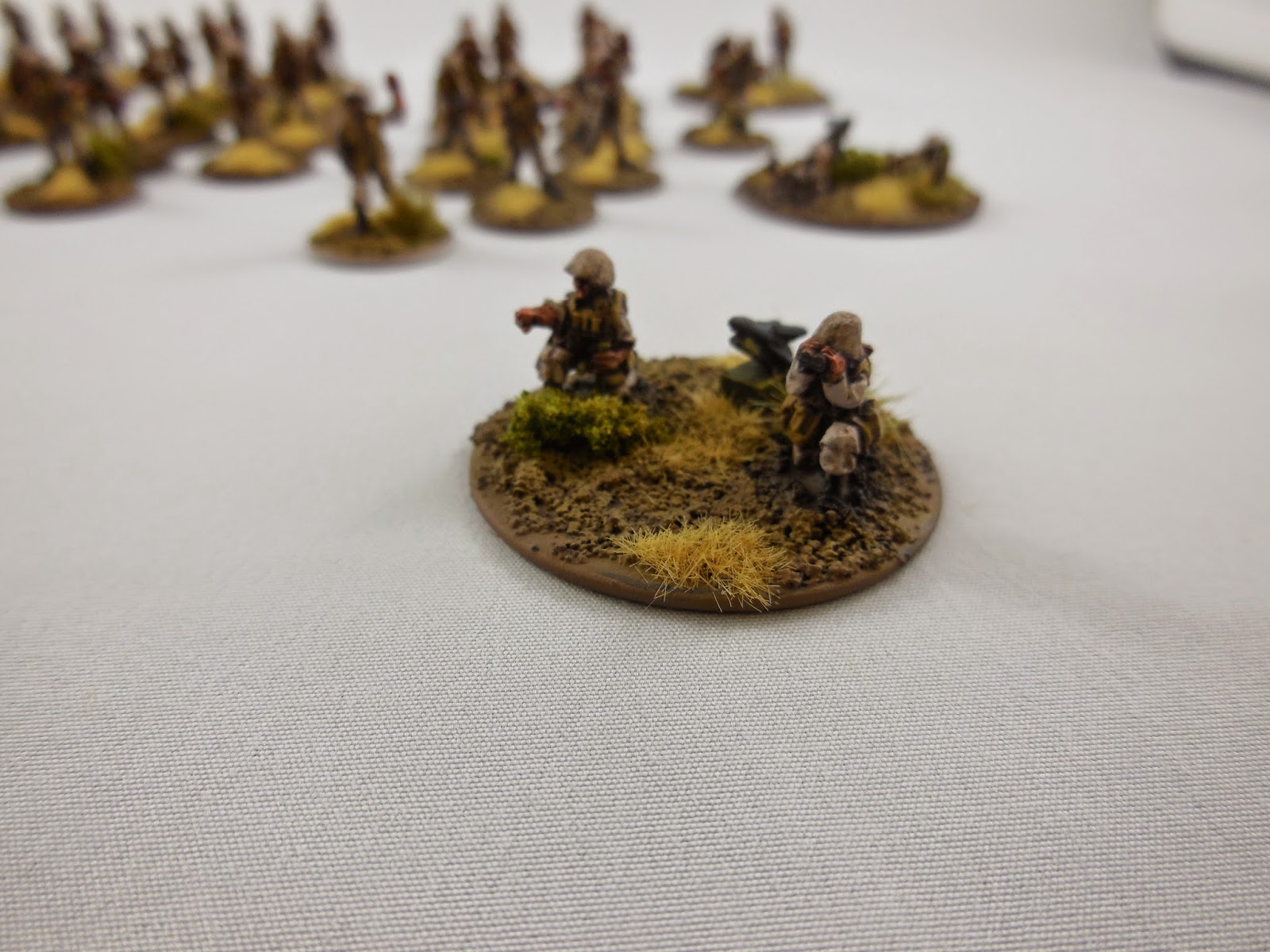 ...and kneeling. The weapons look very nice and they all fit well on a washer. 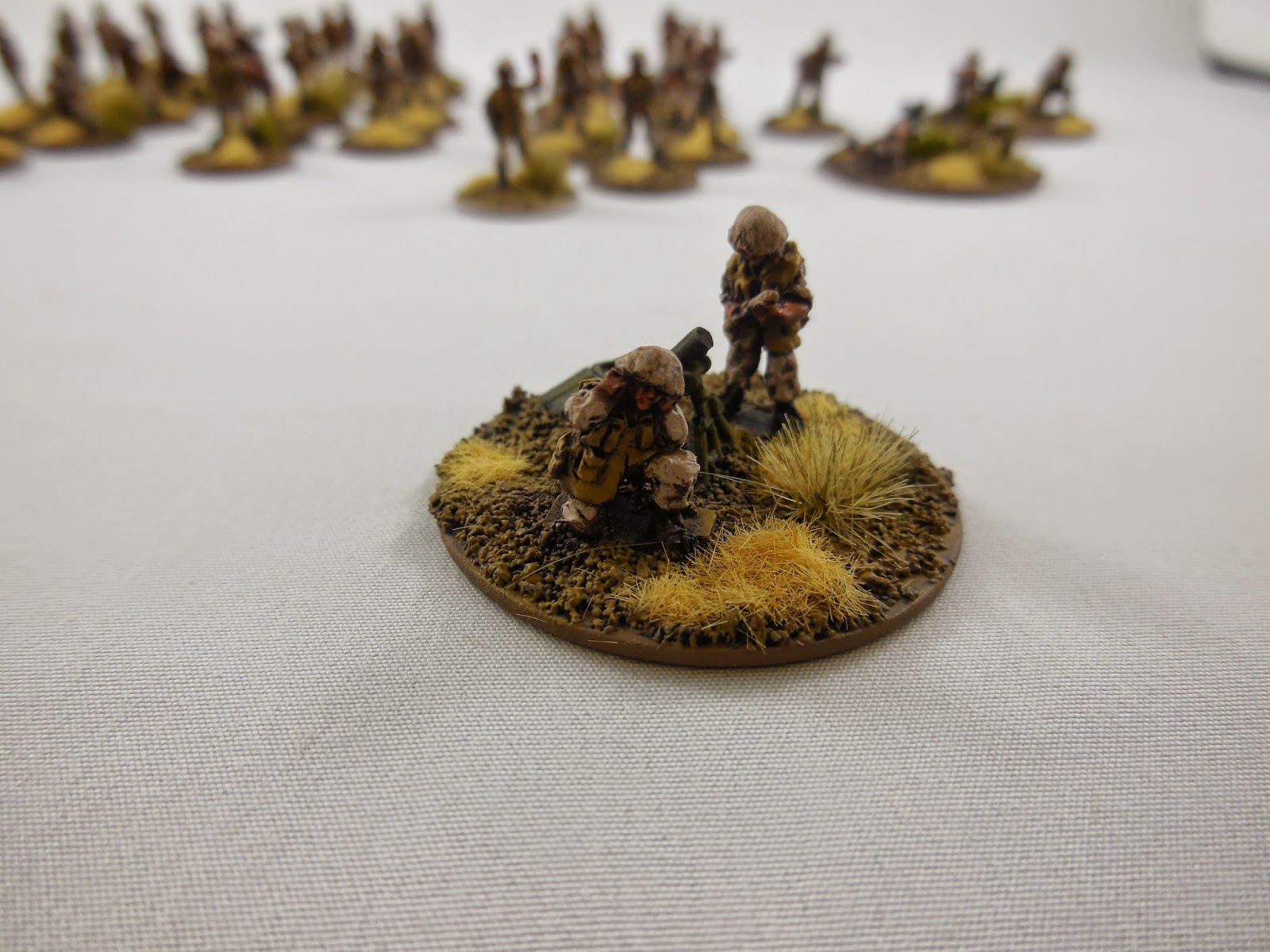 The support weapons pack comes with a mortar pack too, as well as a heavy machinegun (not shown QED) 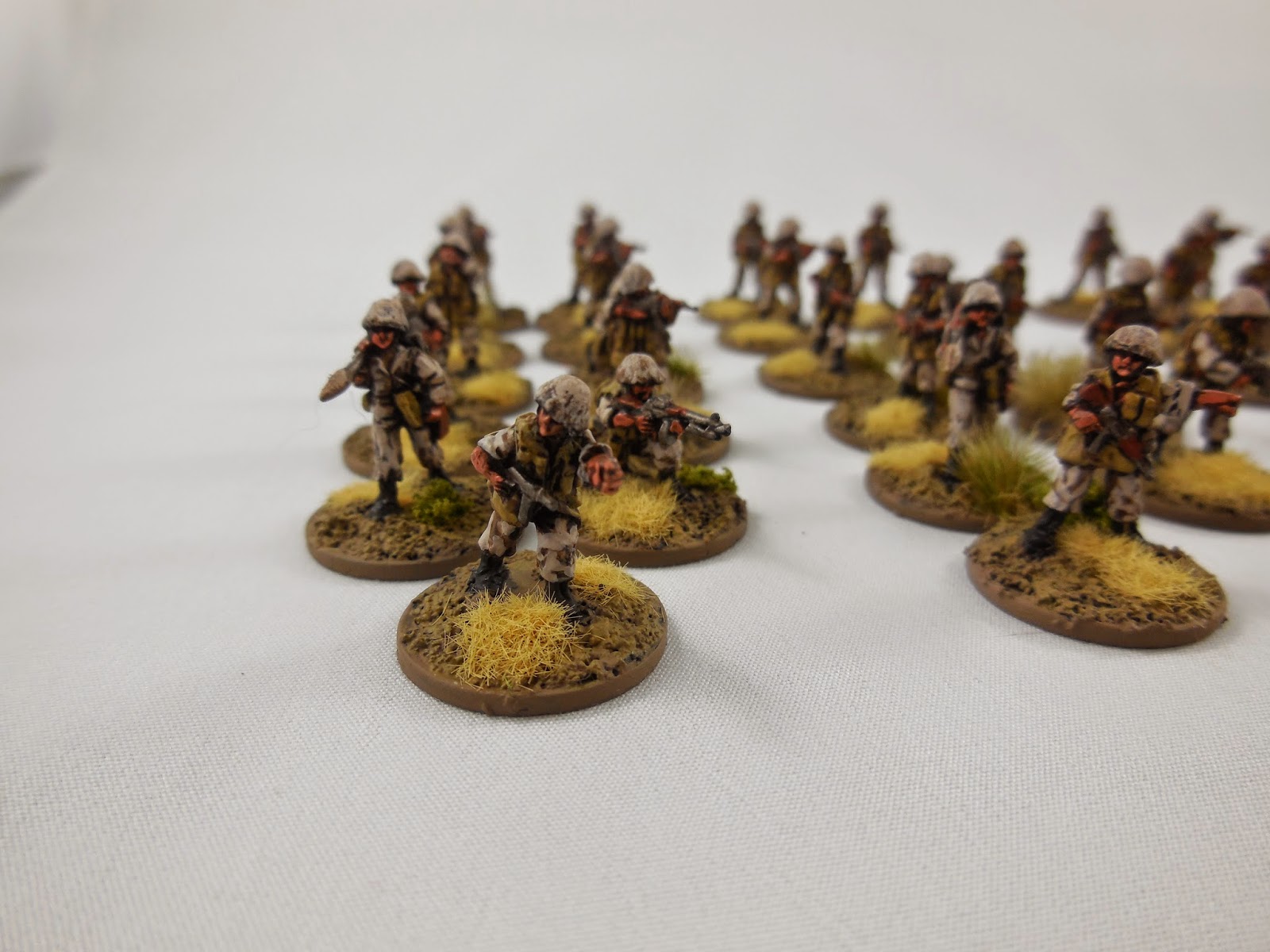 The models were pretty straightforward to paint, too. I sprayed flat black as a primer, then painted most of the figure GW Calthan Brown as a basecoat. The vest was highlighted with Zandri Dust then Desert Yellow, while the sleeves, pants and helmet were highlighted with Deneb Stone. 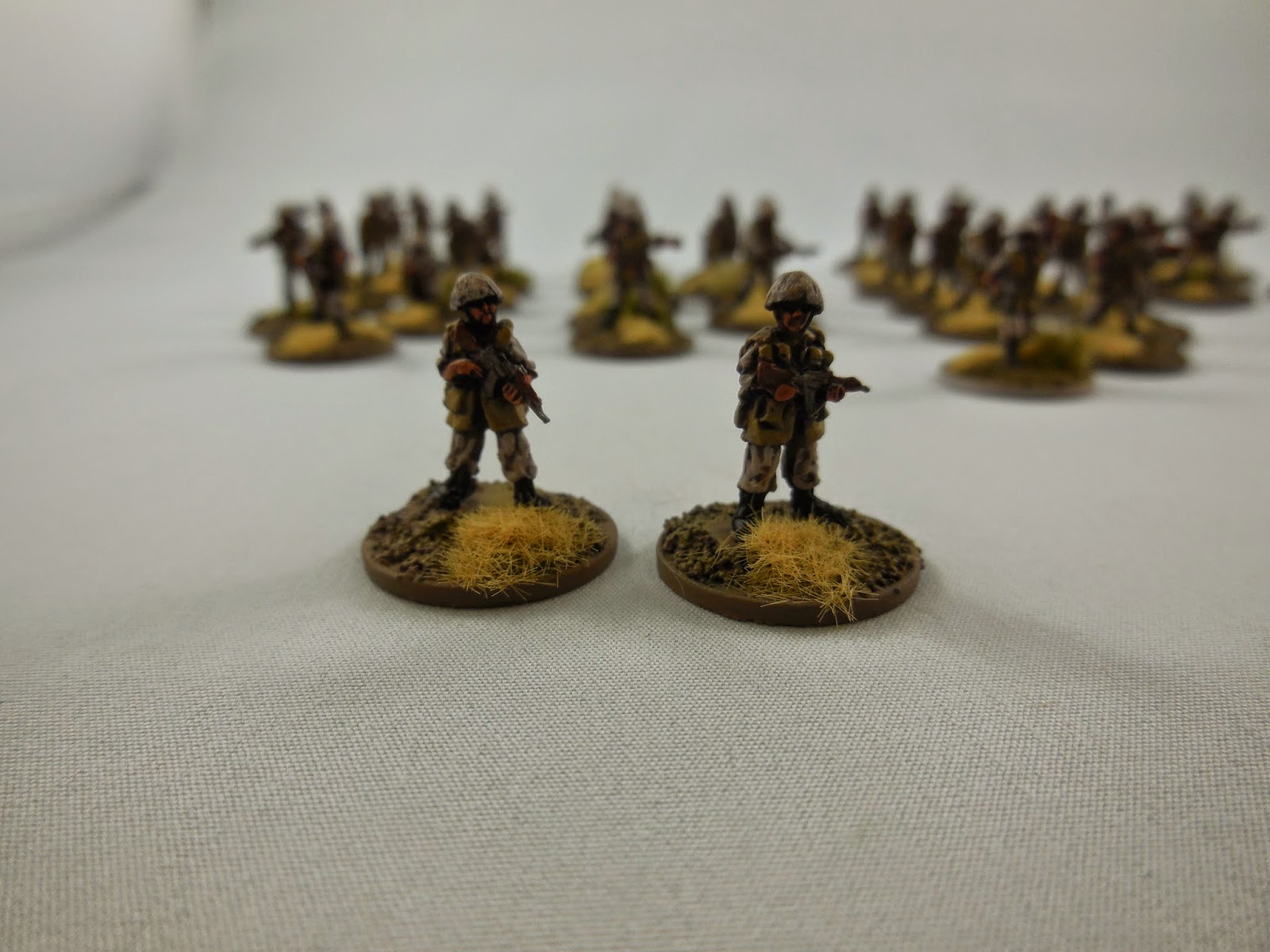 Flesh got painted Dark Flesh highlighted with Dwarf Flesh. Woodwork on the weapons was painted Vermin Brown and the metal parts, Leadbelcher. 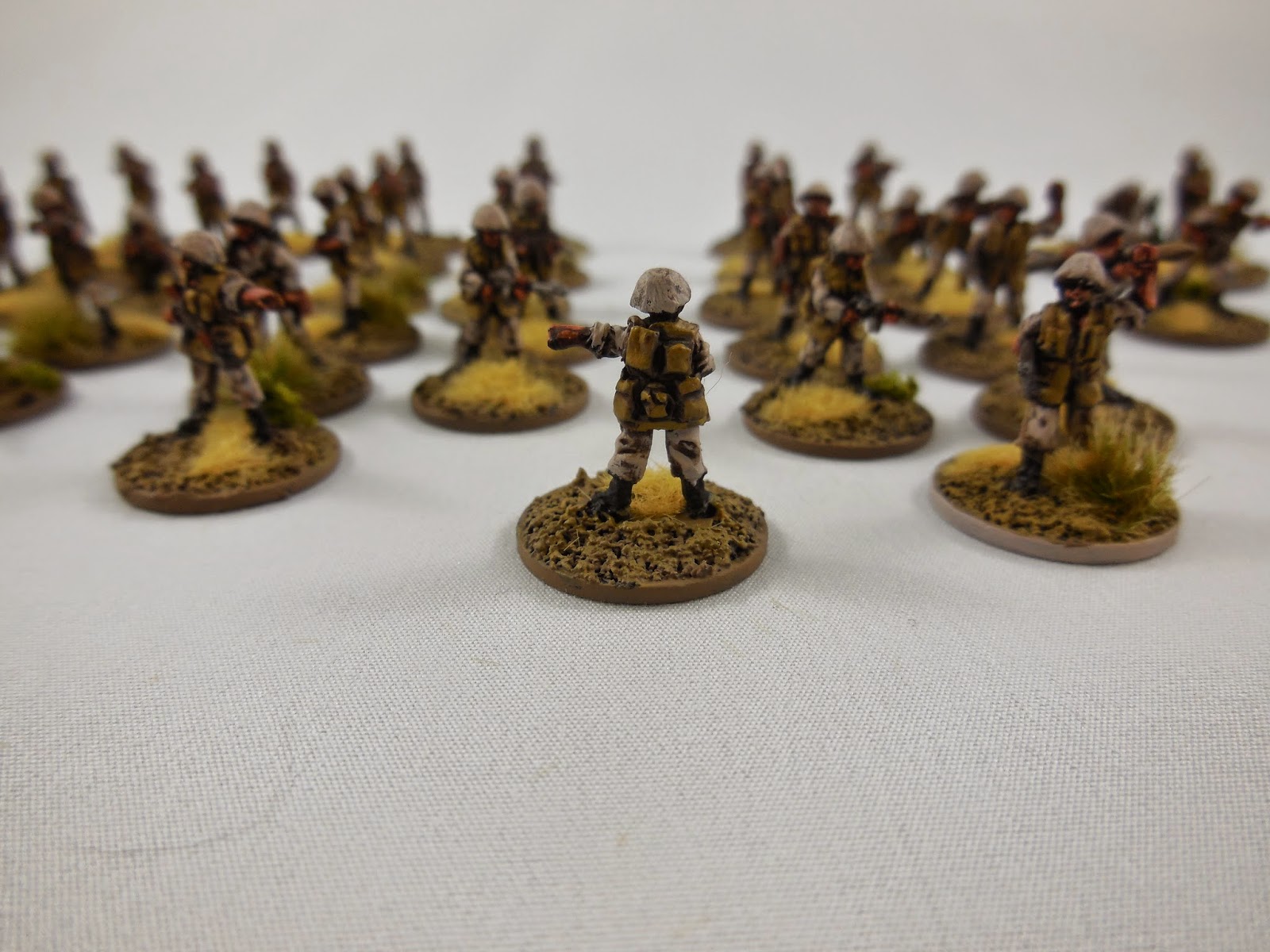 After this step the entire figure got a wash of Agrax Earthshade, and the component parts highlighted once more with the lightest tone - either Desert Yellow or Deneb Stone - save for the helmet covers. 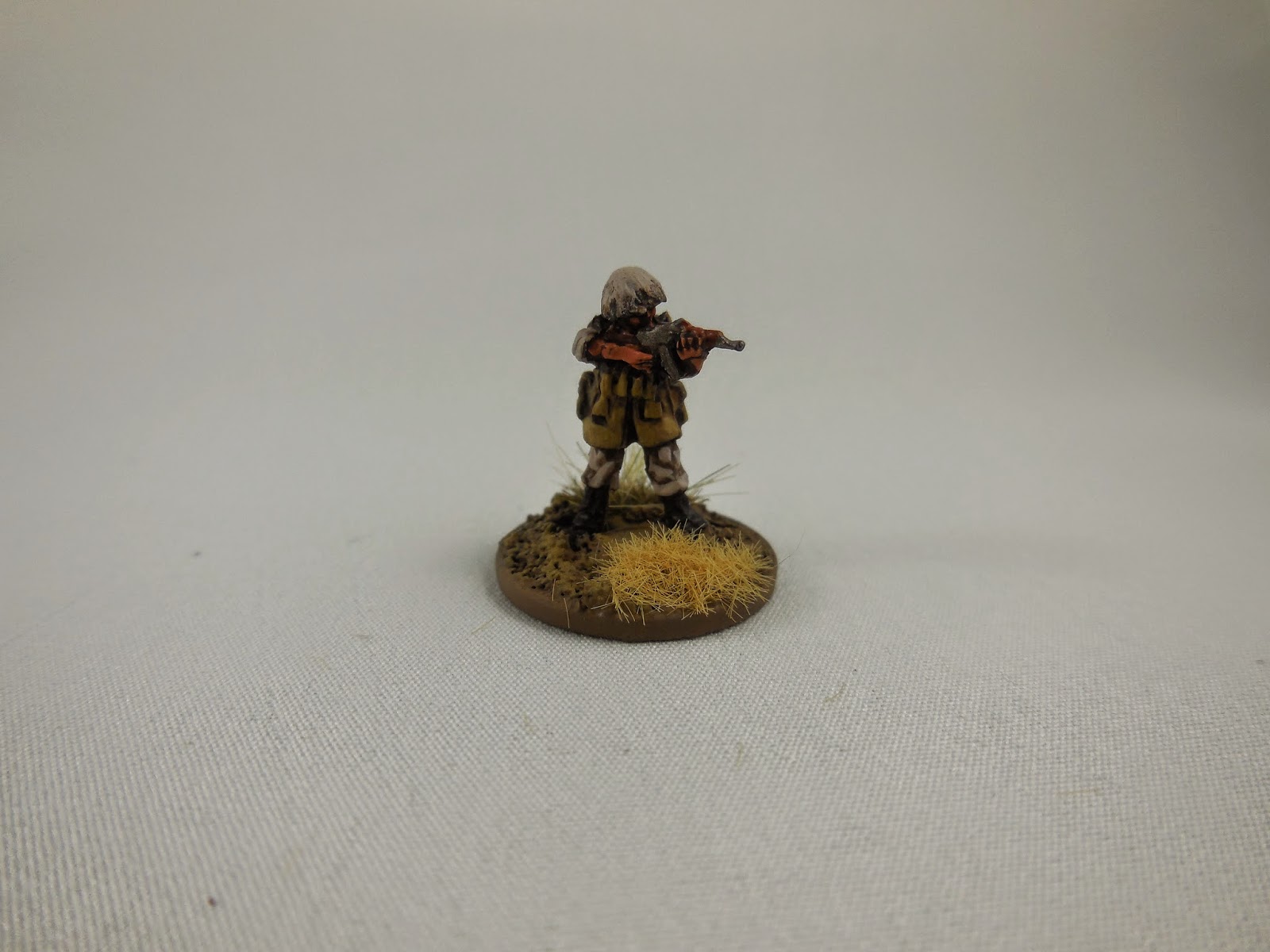 I had a tough time figuring out how to do the camo covers for the helmets. I didn't want to make them too obviously "camo" but at the same time, wanted to differentiate them from the colour of the tan pants and sleeves. I ended up just stippling the Deneb Stone over top of the Agrax wash, leaving random slightly darker blotches showing through. 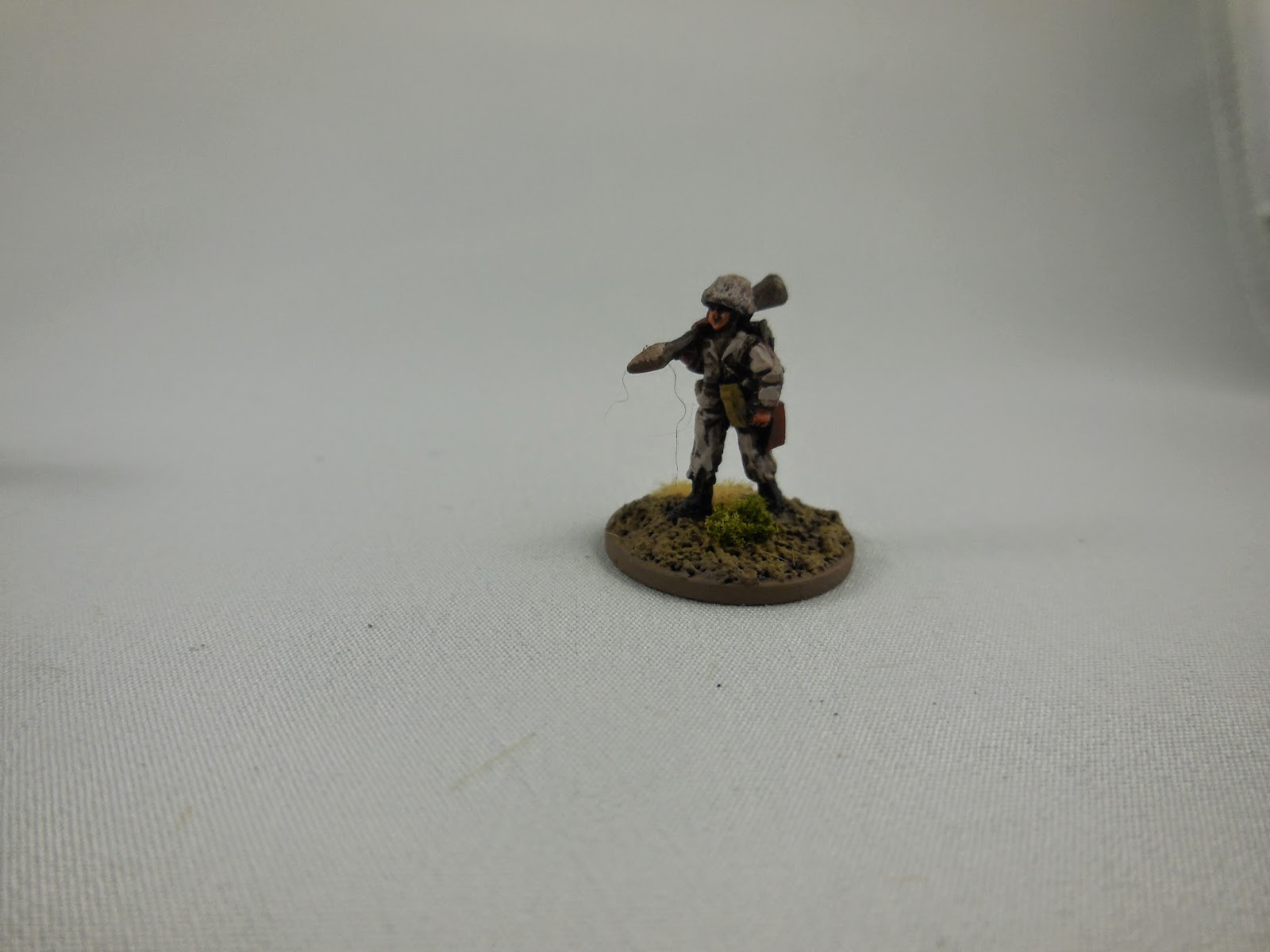 The last step was to paint the bases (Desert Yellow over Calthan Brown) and add GW Dead Grass and Army Painter tufts to taste. 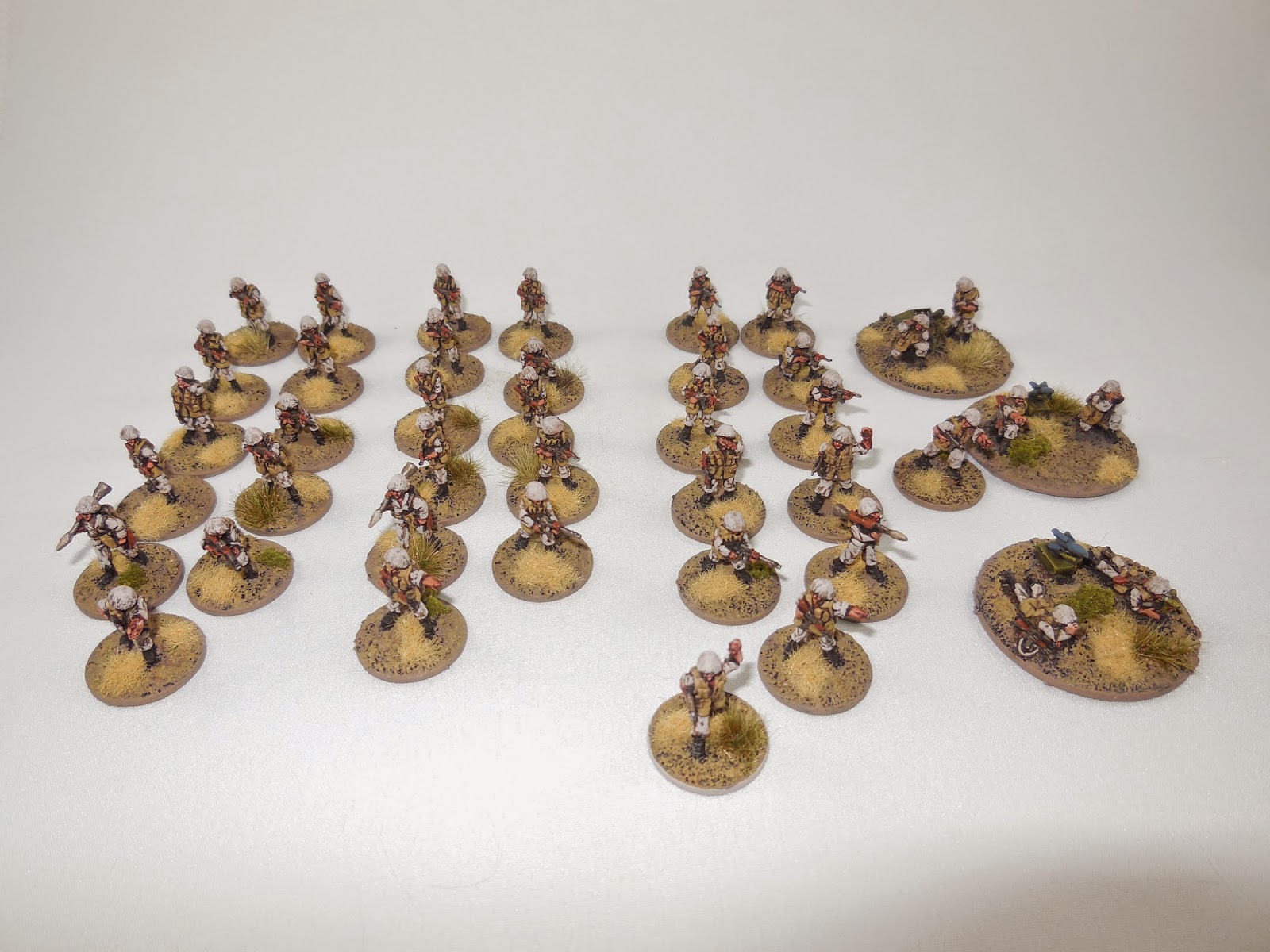 And hey presto! Platoon complete - well, except for those pesky machinegunners. A quick trip to Home Depot or Rona will get the base sorted and they'll only take an hour or so to paint. These should be enough to play a Chain of Command or Red Storm! game, with tanks and tank destroyers added to taste.

*Obviously they're not "finished" as I've not painted the heavy machinegun and crew. Unfortunately I didn't have enough large washers on hand. So it goes...
Posted by Dallas at 9:47 PM

Very good looking minis, great paint work. I really like Khurasan's YKW range. I would buy some but I don't know what I'd use them for, and I don't need to start gaming Israeli conflicts just yet.

Are these some of the guys you're taking to Prairie Con?

Yup, these are for the planned Prairiecon game.