This is another of those projects that I just picked up for fun and to try something different.

The figure is Misaka, one of the Ten Thunder Clan from Malifaux, but I don't play the game.  I just saw some of the poses and decided I wanted to give something different a shot.

This figure reminds me of the fight scene in Crouching Tiger, Hidden Dragon in the courtyard at night.  One of the combatants gets thrown back against a wall and I swear she stops herself in this exact pose (body wise, she had a sword as a weapon instead).

Anyway, I chose to try and do some cherry blossom type pattern on the clothing, but not the whole thing so again drew some insperation from the movie and picked some panels before the ankles and wrists for patterns.

Lastly, while I love the pose, I wasn't sold on the anime style woosh coming from her foot to show movement.  I know it works in cartoons, but here I didn't quite know how to handle it, so painted it in pale blues, greys, and white.  I then based her on an asian garden base and tried some of the leaf foliage from Secret Weapon.  I put some on the base, and then attached it up the swoosh in an attempt to show that the wind from the movement pulled the leaves up in the air with it.

Still not sold on the overall final effect or if I managed to pull off the look I wanted... but it was an experiment and a piece just for fun. Overall, it was definately something fun and different, so that is a plus, and it was a learning experience with tiny free hand, basing, and leaves, so all that was great.

Thoughts on the overall effect? 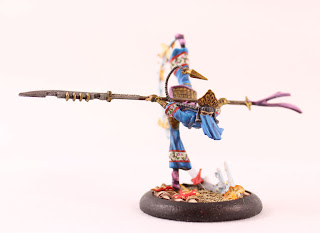 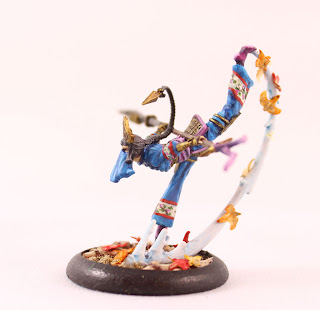 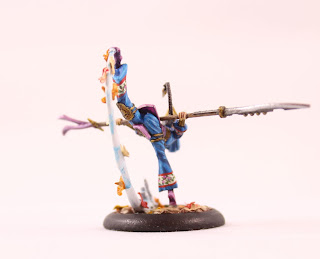 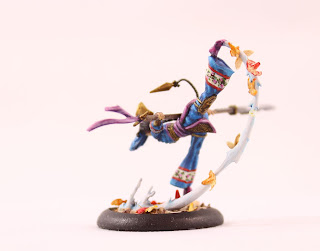 I agree with Tim, very cool mini and well executed paint job! Adding the leaves to the 'swoosh' make it work really well.