40K Griffons vs. Tau - This Time It's for the Greater Good 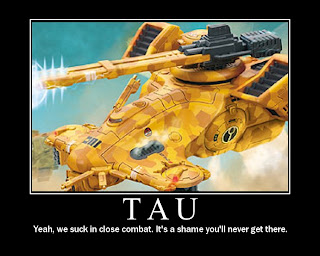 Last Thursday was my birthday so as is my wont, I set up a big game to celebrate. This year I wanted to have another outing with the Howling Griffons so I challenged Conscript Greg to a rematch against his Tau. 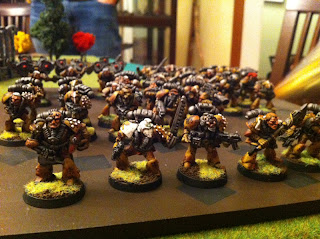 With 1500 points to play with you get to roll out with *most* of the toys although I still had to leave the Devastators and Terminator Squad (not to mention the Chaplain and Librarian) on the Battle Barge (I'm getting the feeling that my armies are becoming more and more suited to Apocalypse-size games?) 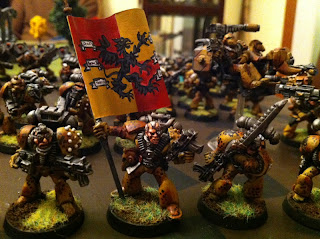 Finished up a standard for the converted Captain I picked up in the blister; he joins the command squad. 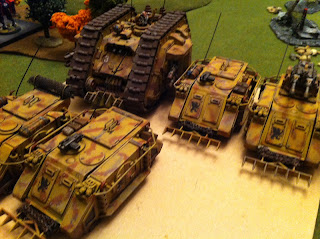 Everybody rides in this crew! The final list consisted of the Captain and command squad in a Razorback, three sections of 10 Marines each in Rhinos, a seven-man assault squad with jump packs, a Landspeeder and the Land Raider Armoured Proteus. 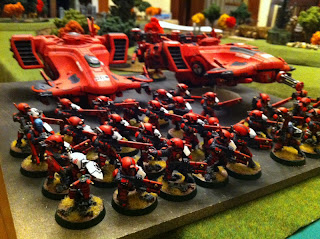 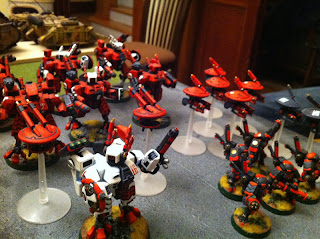 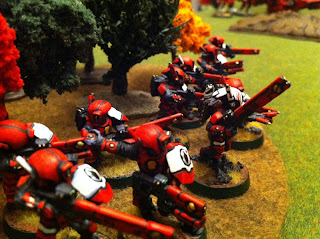 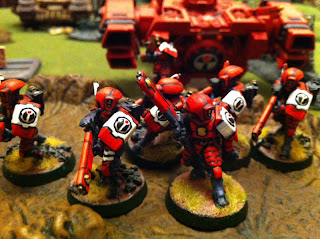 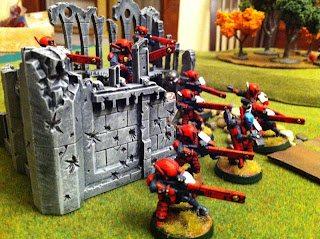 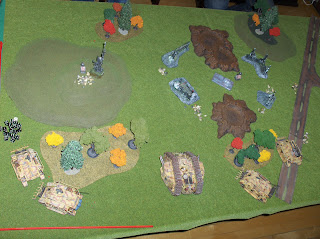 The game we set up was a straightforward objectives-hunt with three on the table: the comm tower at left on the hill, the missile silo at centre between the craters, and a Gothic ruin at right just out of shot. You can see my stuff rolling onto the table for my first turn. Greg has yet to deploy. 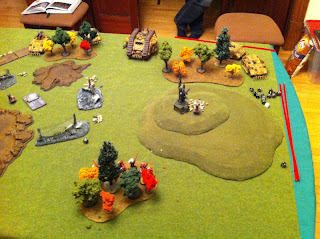 Here's another view. We had some more full landscape shots but Blogger refused to let me post them as landscapes, very annoying. 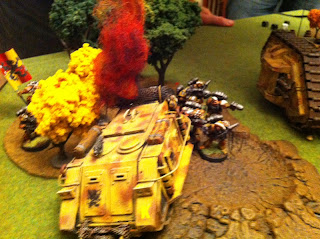 Anyway, I decided to go for the two objectives at centre and on my left and ignore the one on my far right. Greg went for the ones on his left and centre and ignored the one on his right. This resulted in the entire battle being waged for the centre objective, the only one we both wanted. 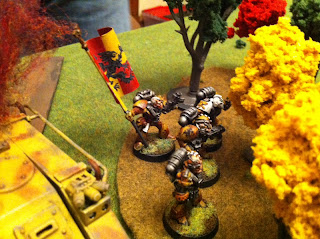 My Razorback was brewed up almost instantly so the command squad disembarked and unfurled the standard. 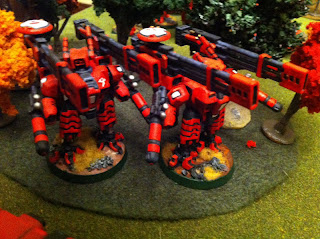 These guys deployed in a wood at the centre of the Tau line and were responsible for moderate mayhem, although Griffon bacon was saved for several turns by Greg's appalling die rolling. Whew! 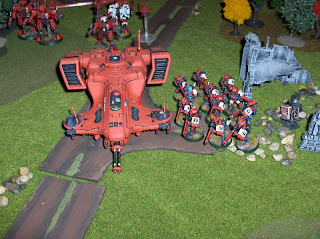 These guys secured the uncontested objective on Greg's left flank. They added some long range sniping too - even the basic Tau guns are really good! 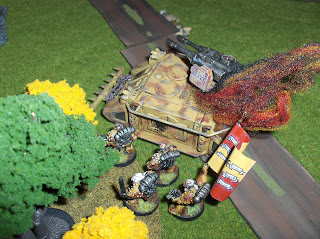 Another view of the big cheeses behind their destroyed transport. 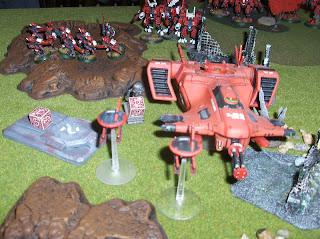 The infanous missile silo can be seen at centre left. It's a cool little model from Armorcast - three pieces: silo top, a moveable hatch, and the missile warhead. As the turns went by we moved the hatch aside and the missile rose into firing position, ready to ruin everyone's day. 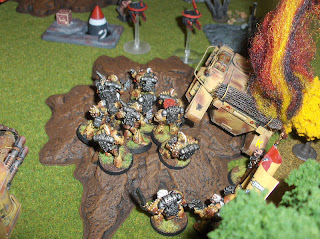 Missile approaching launch and a Griffons squad has disembarked preparatory to assaulting the objective. (Their Rhino blew up of course) 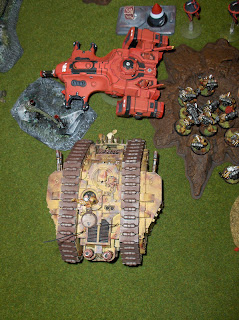 A highly annoying Devilfish wish no guns saw fit to interpose itself in the firing line of the Land Raider... 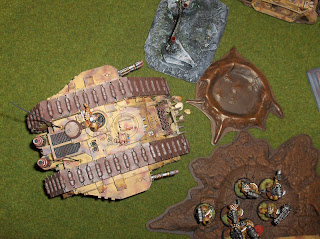 The command squad struggled up through the crater to assault some nearby suits (below). The Proteus acquitted itself very well in this game, redeeming the shame of the first-turn blowup of its first outing on the table. The Assault Squad and Landspeeder didn't fare so well, deep-striking in front of a Tau gunline and not surviving the ensuing shooting phase :-( 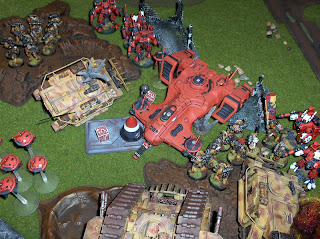 We left a section of Marines on the leftmost objective and brought the other section and Rhino over to help in the middle, which they did by driving off the Tau section in the crater (top left). They had problems surviving the concentrated fire of the suits though. In a fortunate turn Greg's commander got left out on his own, and was charged and killed by Marines. The damn Devilfish (above centre) wedged itself in between my Marines and the objective, denying me sole control. 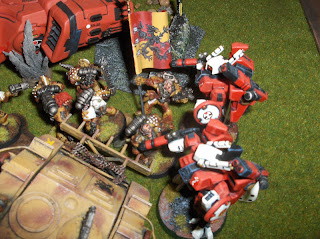 My command group was *just* in range to assault the suits (thanks to the Warlord trait I'd rolled earlier) and eliminated them. 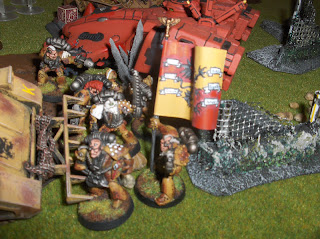 Winning the battle, but drawing the war... the game ended up a precise draw. We each controlled one objective (three VPs), Greg scored First Blood, I scored a leader kill, and we both got Linebreaker.

It was a pretty fun game and 6th edition represents a significant advance over 5th, but we found we really needed Conscript Dave V. there to provide his encyclopaedic rules knowledge. We had to spend too much time checking the rules to verify how Rapid Fire worked, etc. Anyway we had fun, a ton of guys showed up through the evening, and we drank beer, ate cake, and pushed around some really nice models. If that's all I get out of wargaming I'm pretty happy with that :-)

Great-looking battle. Thanks for writing up about report.

Thanks for hosting a solid brithday bash game dude!

No need to re-hash my views on 40k here, but the plaque-like builup of special rules on every aspect of the game really slows it down. I agree the games go much quicker when Dave is around to help us out - thanks to Dave!