Earlier this month I played at a local Warhammer 40K tournament, Mechani-Kon. It was my fourth outing at this tournament, run by Alex B and Thurston H. One of the reasons I enjoy playing at Mechani-Kon is because it is a Renaissance Man style tournament, rewarding several aspects of the hobby: painting, conversion, sportsmanship, game play...

Below are photos of most of the finely modeled and painted armies that were brought out for the event. 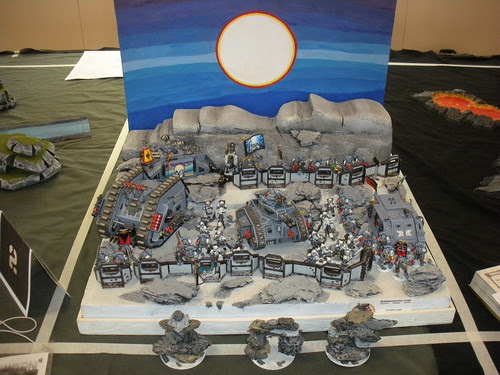 Christian deservedly won  the Best Appearance award. Note above the detailed objective counters in front, the painted backdrop, and the overall look and feel of the force.

Below, check out some of Christian's detailing: 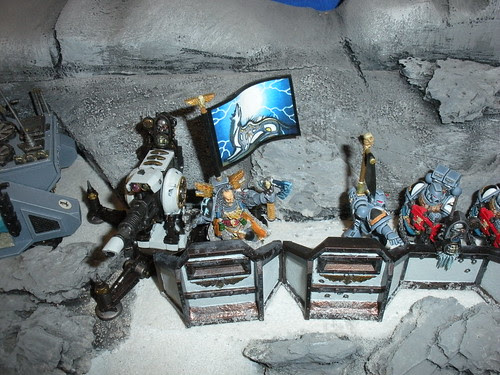 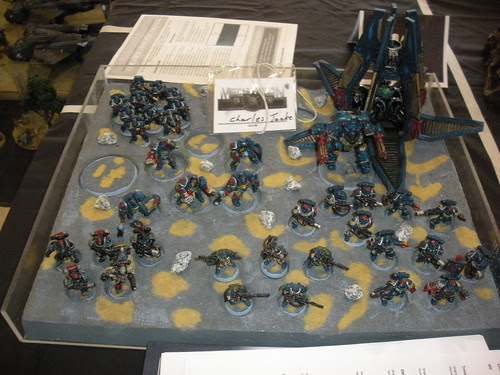 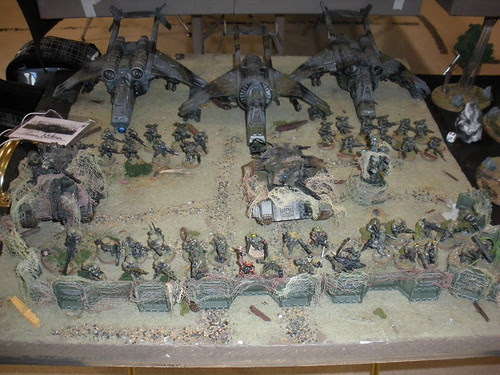 Below, note the camo detail on Kevin's models, including the Aegis Defense Line. 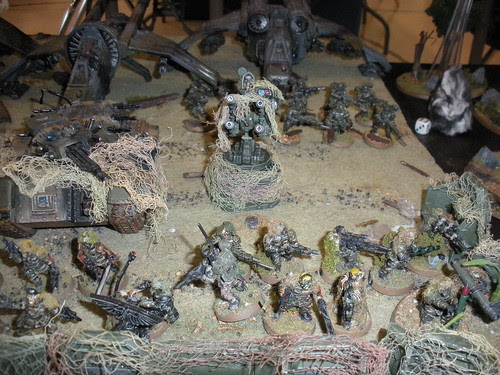 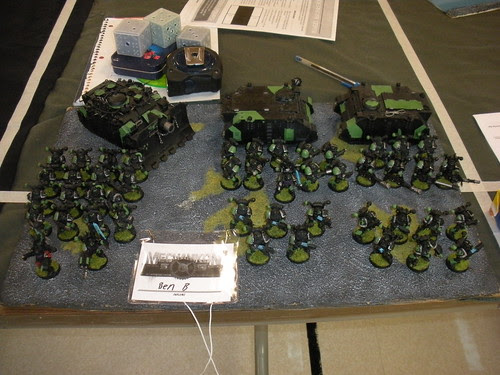 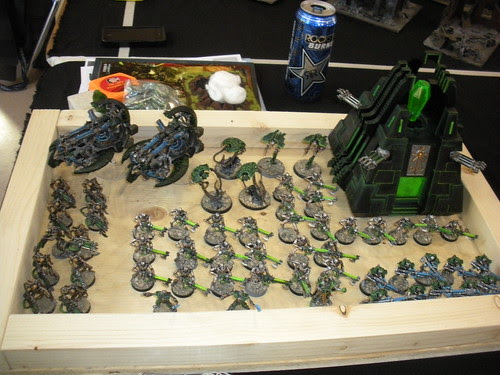 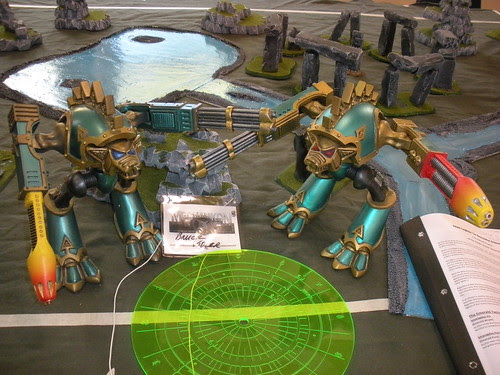 Unsurprisingly, this pair of giant war machines was NOT over the top. With no scoring unit,s they always had to try and win on secondary objectives and, as two detachments, any Titan kill counted VPs for Warlord. 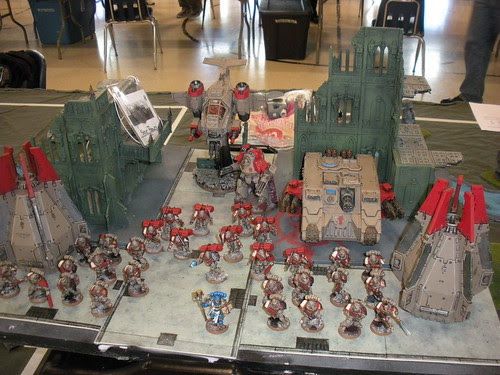 Below, note the detailing on Steve's vehicles. 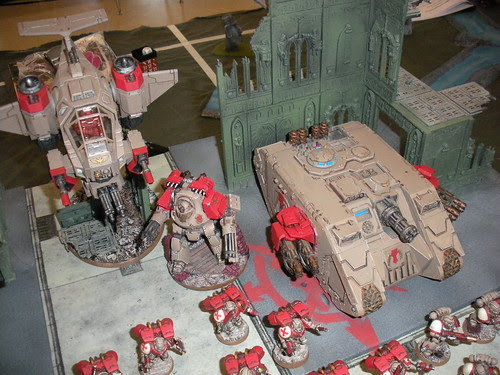 Grey Knights (I apologize for the crappy photo): 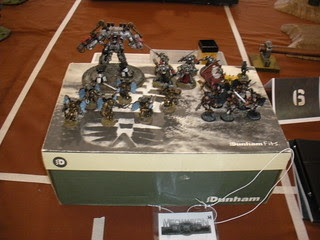 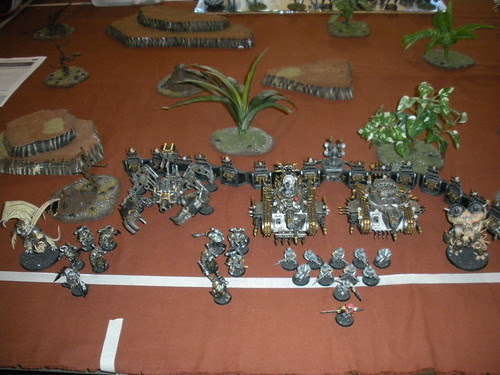 Below, note the conversion of the new Hell Brute model. 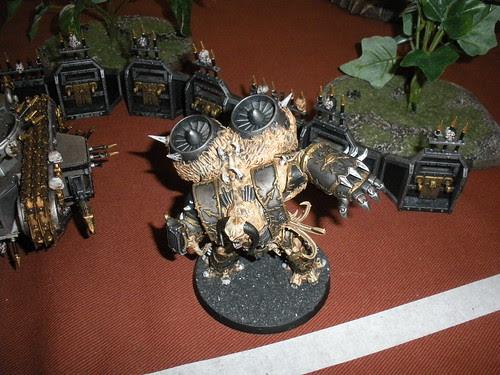 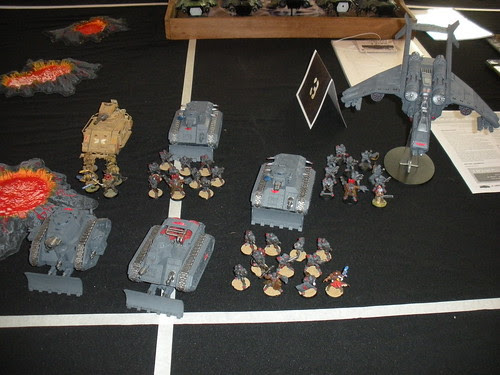 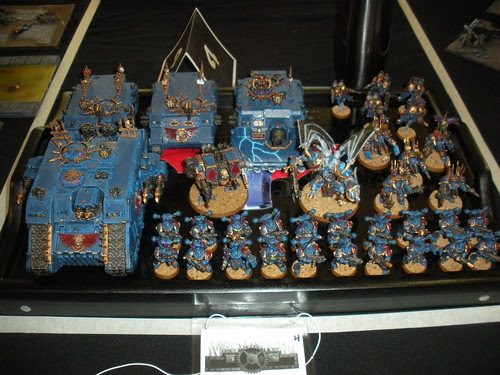 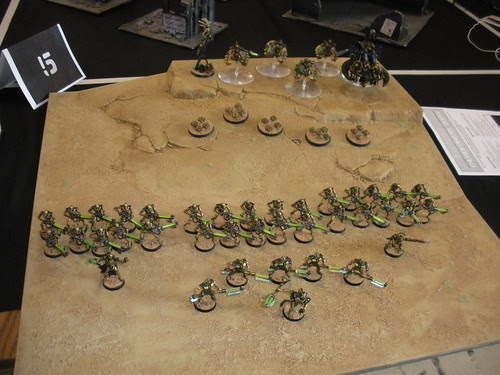 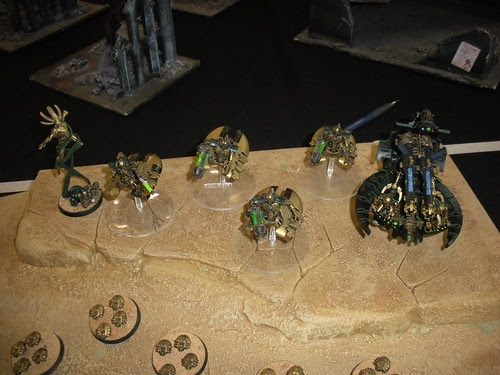 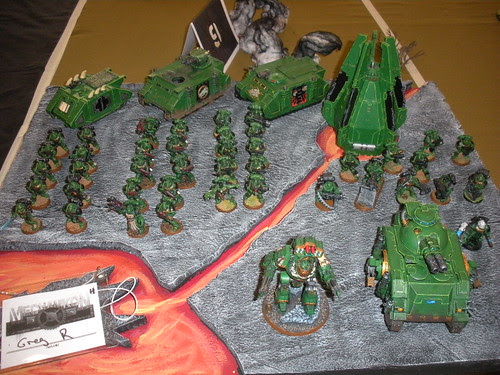 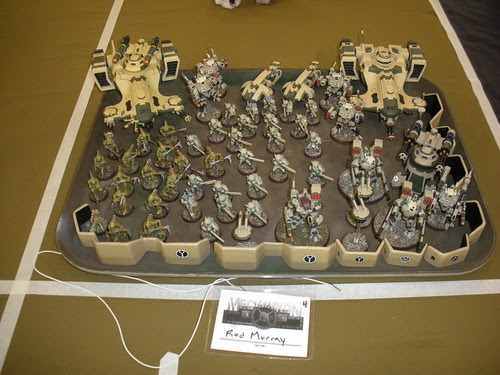 More Tau (Tau have really made a comeback with the new 6th edition rules): 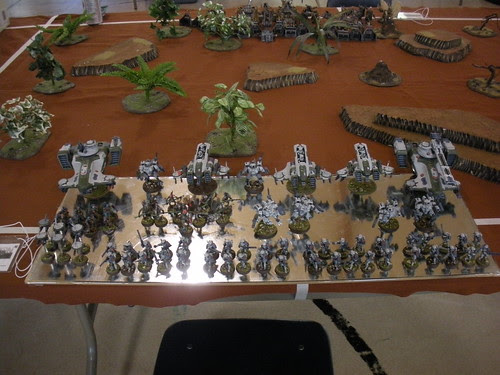 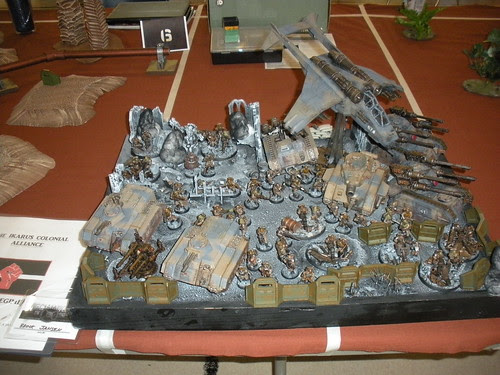 Some details of Brock's forces: 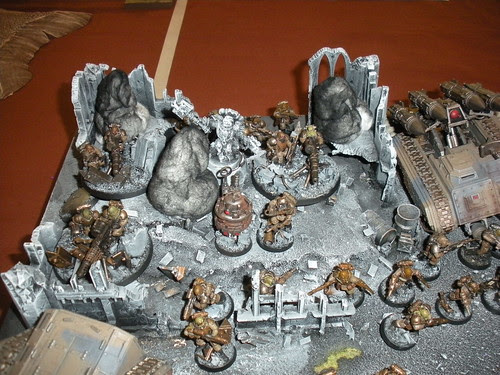 Brock's Hydra anti-aircraft tanks (surprisingly, there were not an overwhelming amount of aircraft fielded at the event): 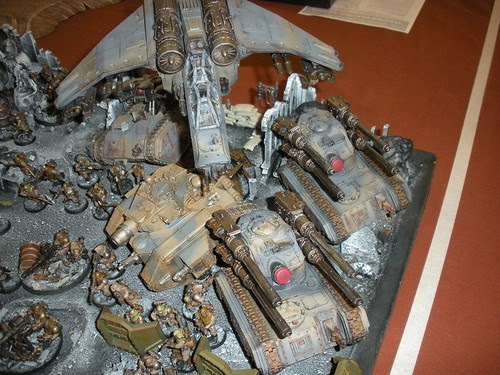 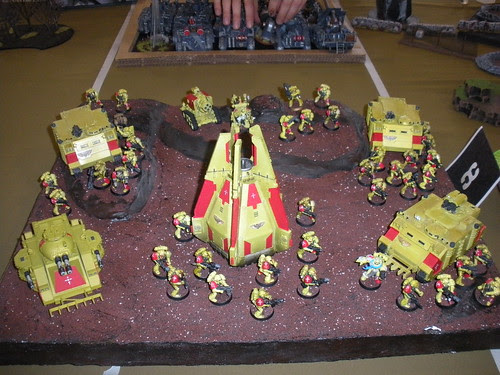 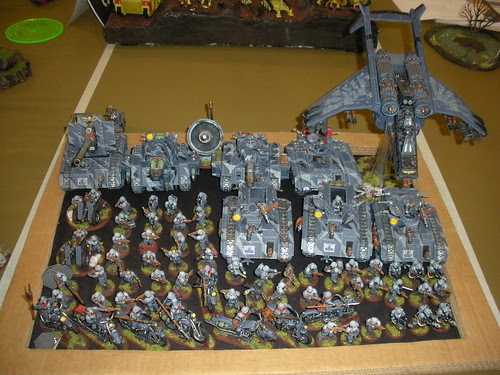 Note the clever conversions of motorcycles to count as Rough Rider cavalry: 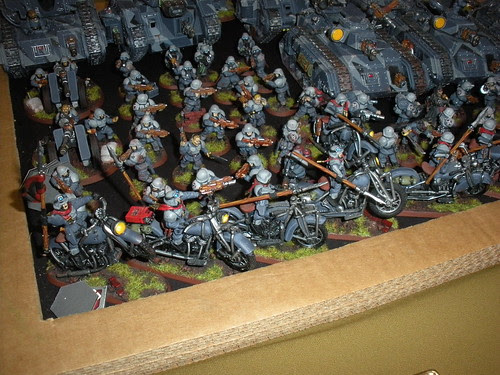 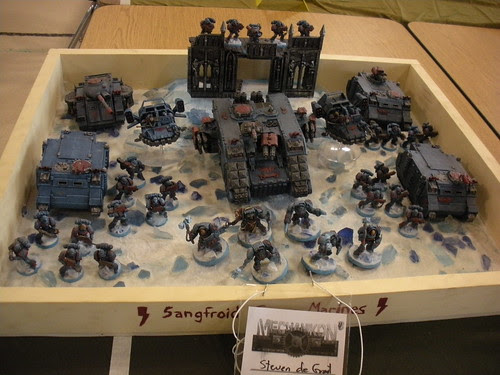 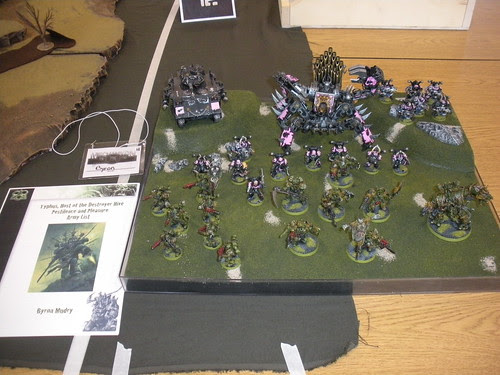 The conversion and detailing on Byron's models is off the hook: 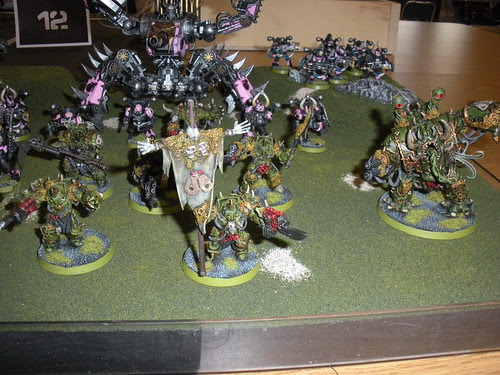 It was a long day, where each player was scheduled to play four two-hour games. The event was well organized, and everything seemed to run smoothly and on time. They brought in pizza and drinks for supper, and sold snacks and beverages throughout the day. The venue, the Robert A. Steen Community Centre, was well maintained and clean.

People seemed to bring balanced armies. For example, I did not see any Cron Air  (i.e. Necron air force with maybe 6 or more planes). I fielded a variation of my Eldar Swordwind, with even more Dire Avenger Aspect Warriors, and including a Fire Storm anti-aircraft tank. I went without any psychic defense, which seemed to turn out OK. Yet again, I was the only Eldar player at an event.

The scenarios were challenging and fun, not being the generic scenarios from the main rule book. A week before the event the players were provided with previews of six scenarios, four of which were actually used at the tournament. The scenarios may be downloaded here.

I had four fun games against great opponents; I shall provide more info on my forces and games in a separate, detailed battle report, to be posted soon.

Thanks to Thursty, Alex and everyone else involved in running and supporting the event. I had a blast!

Dave - your Flikr account seems to be "locked down" - I'm getting a "...You must be signed in to see this content..." message. Didn't get that on the "Wings of Glory" game pics.

Kevin, it should work now. I changed permissions on the photos.

Holy Cow, those armies are GORGOUS!