A couple weeks ago I ran a poll on the blog to see what type of Dreadnought readers wanted to see in my Howling Griffons army. Well, the overwhelming winner, with 73% of the votes cast, was the original Rogue Trader "Mr. Peanut" style walker.

This suits me, so off I went to eBay to find some suitable models... and ended up with three. I only got two left arms in the deal though, but that's OK since I was planning on updating the weapons loadouts anyway. I'd gotten some rare earth magnets at Lee Valley Tools suitable for the purpose, so on those went...so when I run I'll have a choice of two lascannons, a missile launcher, a multi-melta, or another CCW. 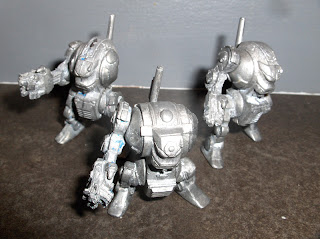 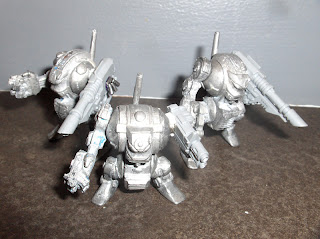 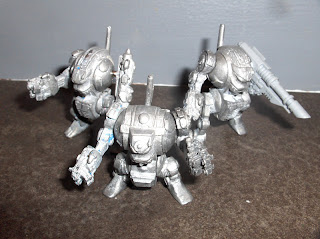 Just waiting for some 60mm bases from Hoard o' Bits for these. They *barely* fit on 40mm bases but I'd like to try the aesthetics of the larger ones and if LCF ("looks cool factor") is maximized, that's what I'll use.

Next up is another vehicle for the Griffons. Since I got the Razorback turret for one of the Rhinos I figured I'd be unlikely to use the Predator turret, especially if there were no opportunity to mount sponsons. Then I happened across a set of Rhino track pieces on the sprue, with no chassis... so I figured that even with my minimal scratch-building skills I could cut up some plasticard to make the chassis. The bitz box supplied the requisite parts to finish the model - front doors, sponsons, hedge cutter, etc. 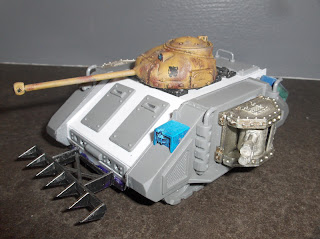 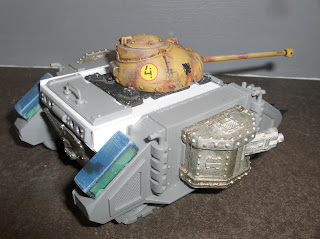 Some dollar store chain wrapped around the spiky hedge cutter, and it will be ready for primer. 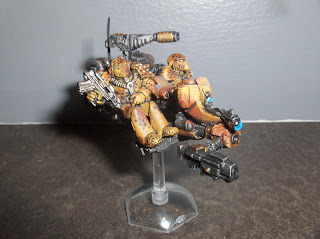 I wasn't happy with the way I'd based the Landspeeder and it repaid my lack of faith by falling apart and smashing the model to pieces. So after I stuck it back together I raided the spares bin again with a view to basing the model the original way - on a clear hex-base. Much more stable and aesthetically acceptable, not to mention historically accurate ;-) 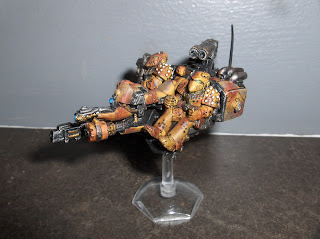 Dallas
Posted by Dallas at 7:18 PM

That landspeeder still looks a little top heavy. I would recommend gluing a washer in the underside of the hex base, and then texturing, painting and flocking the topside.

I've done something similar with both starship and grav vehicle models and have saved myself a lot of grief by reducing the number of faceplants the models do when moved on the table top.

The speeder brings back memories of Rogue Trader. My not so fondest gaming memory is when I shot the crew off of my buddies space marine land speeder and because it had auto drive and auto fire it continued to fly around and shoot up my army the rest of the game.