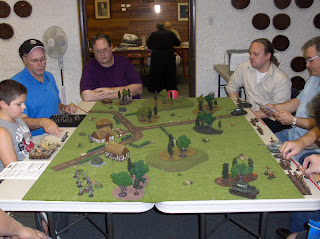 On Sunday afternoon I ran a Bolt Action game at a local show, LegioCon. This time I brought out Germans and Russians for a late-war battle, of about 1,900 points per side, with the Russians as attackers.

The opposing forces were:

I chose the third scenario from the rulebook, and placed three supply dump objectives in the German deployment zone. 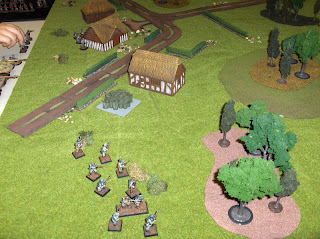 The Germans cannily deployed only half of their force with the rest left in reserve. Here is their right flank with a Regular section beside an objective. 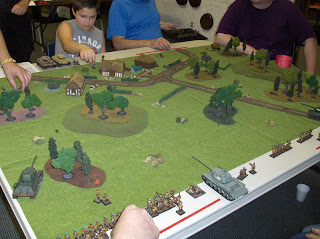 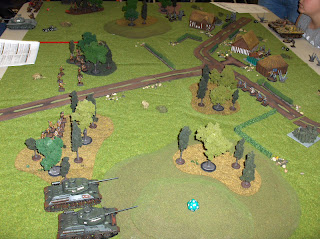 Here come the Red hordes! Two of the T-34s came up the Russian right with infantry in the middle and the other T-34 on their left. 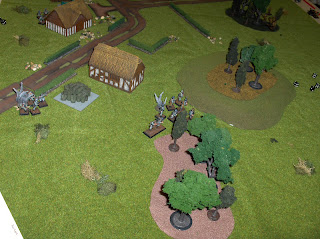 Preliminary bombardment caught the command squad but the other section got caught in the open by the T-34's machine guns... ouch. 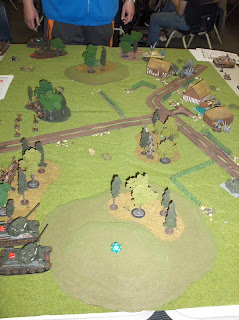 The Panther came on from reserve at top... both T-34's at bottom took potshots at it. They hit it and set it on fire but Benoit's good die rolling kept the crew aboard and the tank in action... 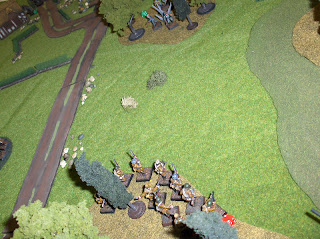 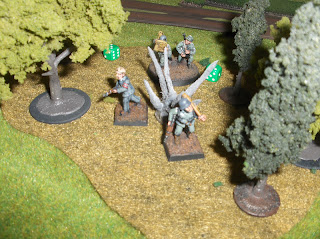 Russian squad shot up the Volkssturm in the woods to good effect, killing three. However the "Green" Germans came through, passing their Morale check and advancing to "Regular" status for the remainder of the game! 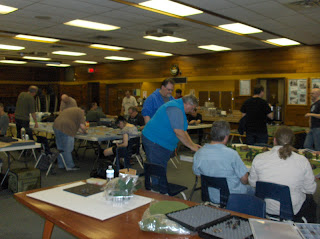 Wider view of the action... Conscripts Kevin and Bill move the Russians along. 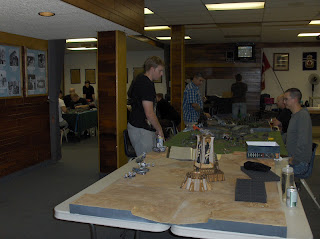 There was a good amount of space at the venue and lots of games going on. 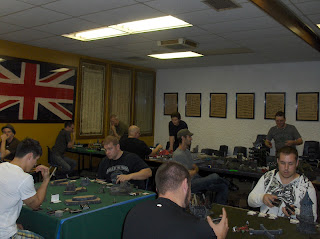 Mostly 40K over in this corner of the room. 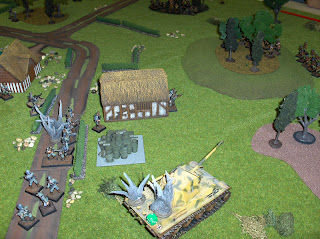 Back to the action on the German right. Panther has a few Pin markers from the T-34's way over on the other side of the table, and the German section has withdrawn under fire to a position behind a hedge. 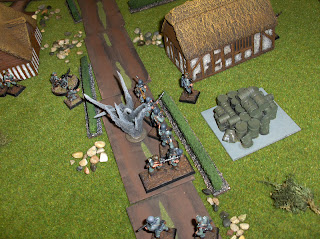 But they are accumulating Pins all the time... and what's that up the road to their left? (see next photo) 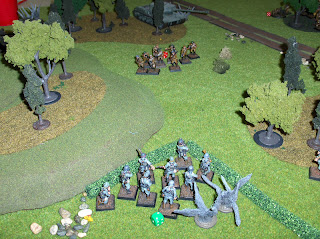 Over on the other side, the Germans have taken up a position behind a hedge and the Russians are forming up for a close assault... behind the Russian infantry the JS-II took up a position in the wood, first annihilating the overwatching PaK gun crew with high explosive, then doing the same to a German section with enfilading fire. 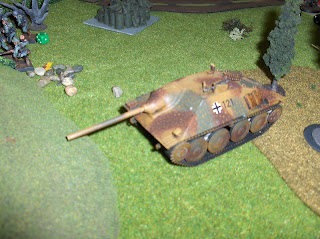 The Hetzer moves up through the woods to face off the T-34s... 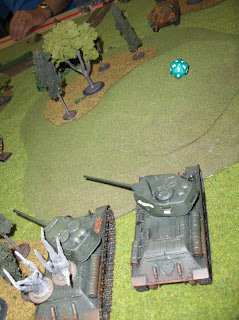 ...which continue to harass the Panther across the table. 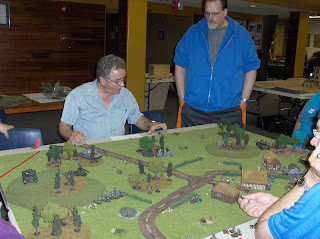 John and Kevin plot the Red Army's strategy. The close assault at middle left failed miserably, with the German section seeing off the Reds through some appalling die rolling from Nathan for the Russians. 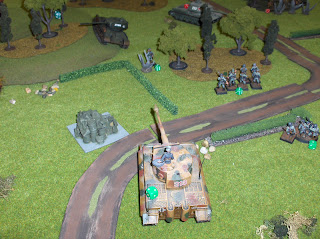 Doug finally brought on the Tiger for the Germans and lit up the T-34 right in front of it. Note the heroic survivor from the Volkssturm section running out with his Panzerfaust... it did not end well for him... "heldentodt" courtesy of a Maxim MMG at the edge of the wood at centre top. The German section moved from the hedge to behind the wood, wary of the Russian MGs. 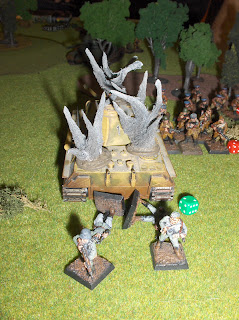 Disaster for the Germans on the right flank! The Oberleutnant moved behind the tank intending to help it Rally after surviving a close assault from a Russian rifle squad. However the Rally roll was the dreaded "double six" (a Fubar). The roll on the Fubar table resulted in the tank reversing directly backwards in panic... straight over the Oberleutnant and his squad, who had failed their "get out of the way" Morale check. Quite awful but very cinematic ;-) 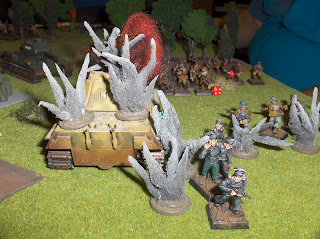 Then the T-34 drove up and shot the Panther again, resulting in another "on fire" and subsequent abandonment by the crew. Doug had brought the Veteran section on table to deal with the Russians close assaulting the Panther but behind that squad was the Veteran NKVD squad chock full of SMG love bombs... 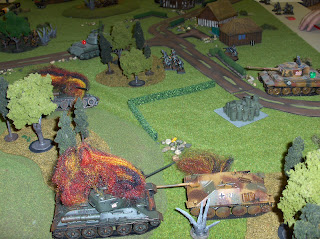 Not so bad over on the other side as the Tiger blew up the T-34 facing it (surprise) and the immobilized Hetzer killed its opponent directly in front.

At this point we had to call "time" in the middle of turn six. The Germans were solidly in control of two objectives but were about to lose the third and if a turn seven were played, might lose another. Call it a close draw. I really enjoyed running the game, and everybody seemed to have a good time, which is the main goal after all. Thanks to the guys for playing and to LegioCon (Bryan G. and Garth) for the invitation and supplying the venue.

On thing that the game brought up again  - and about the only thing that I don't love about the Bolt Action rules - is one thing about close combat - that both units shed all of their Pins before fighting. This means that the only reason to suppress a unit before close assaulting is so that their shooting at you "on the way in" is less effective; the Pins placed on the target unit all disappear and have no effect on the ensuing combat. In this game, the German unit was carrying two or three Pins when the Russians hit them - no shooting at the assaulting unit on the way in, but also no detriment in the ensuing close combat, which the Russians whiffed, resulting in their utter destruction. Quaere whether units carrying several Pins should be disadvantaged in some greater way when engaged in close combat, given that the infantry tactics of the time prescribed suppression by fire followed by close assault to finish the job.
Posted by Dallas at 11:31 AM

And I missed this so I could be at the Banjo Bowl...gag...

Well done, Dallas! It looks like the event was well-attended.

Great game! Thanks for putting it on, Dallas! Looking forward to the next one...

Thanks for running the game, Dallas. It was the game I was most looking forward to at Legiocon and it certainly didn't disappoint.

Glad you had fun, Bob!