A couple of weekends ago I attended a seminar on painting faces by Edmonton's Rick Taylor, sponsored by the Manitoba Model Soldier Society. Rick is a true artist. He has done his own sculpts, and his painting is very informed by classical painting techniques of the old masters. He has won gold medals at The Chicago Show and the World Model Soldier Exposition.

Rick primes his figures with sandable black automotive primer. He airbrushes in highlights in grey. Then, he hand brushes on an acrylic undercoat, or ground, over which he will layer oil paints or enamels.

For painting Caucasian faces, he uses mixes of the following oil colours:


After the acrylic layer, hebrushes on Winsor & Newton Liquin medium on the surface area to be worked on, mostly pulled off again with a clean brush. This gives a really thin layer of the medium, over which the oil paint can be worked (instead of being absorbed into the acrylic layer). The oil colours are used very sparingly, dotted or lined onto the figure, then pushed or patted around with a clean filbert brush. The result is a very subtle transition between high contrast ares of highlight and shadow. For example, he uses a mix of ~75% scarlett and 25% peach black to shade the temples of a face... 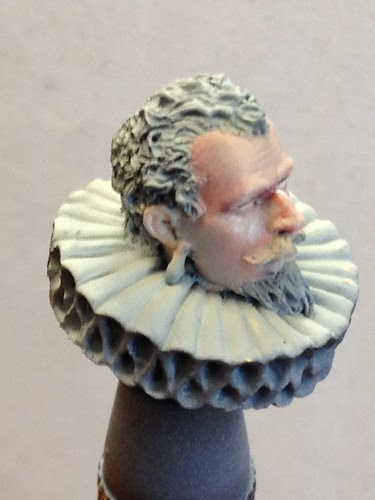 Here are some examples of figures that he has completed. This is a 90mm scale figure: 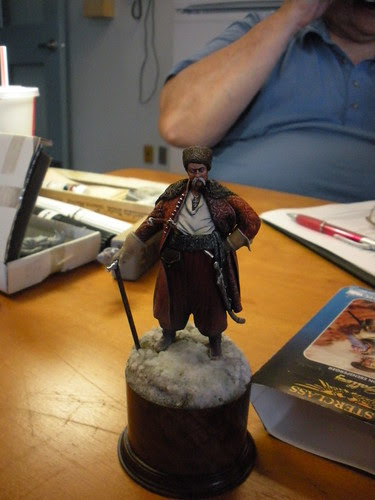 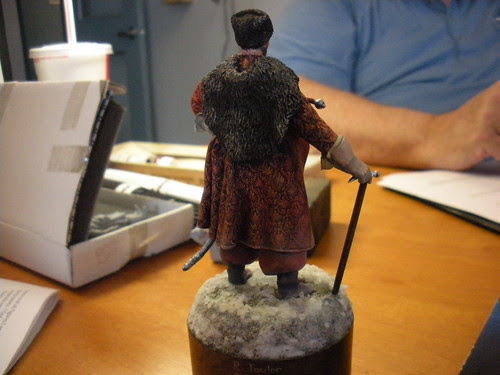 The freehand detail work is off the hook. 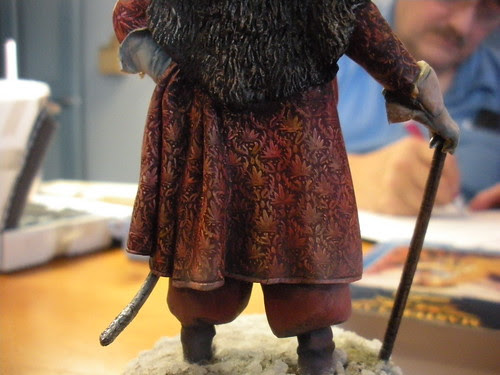 Even the sword scabbard is highly detailed. I find that mixing oils with Liquin also allows one to make very thin lines. You need great brushes - Winsor & Newton Series 7 Kolinsky sable brushes are the detailer's tools of choice. 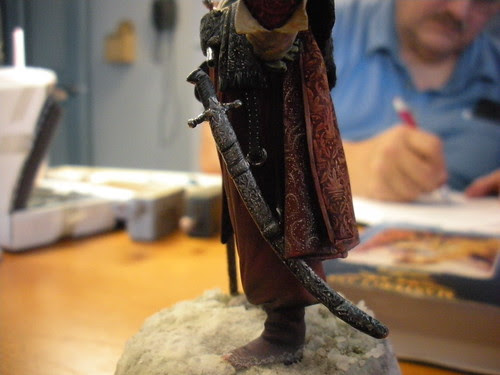 This is a 40mm scale conversion of a figure from Kabuki Models. Rick gave the figure a new head, hands, shoulders and added details. Rick also turned the sword hilt in brass on a lathe. 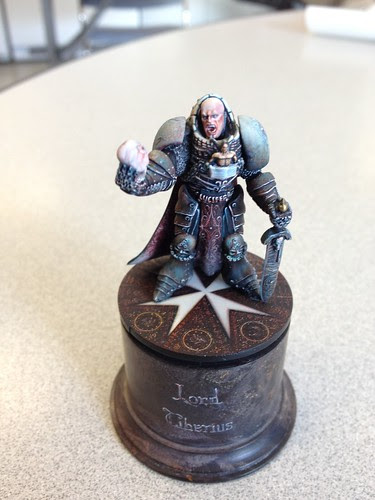 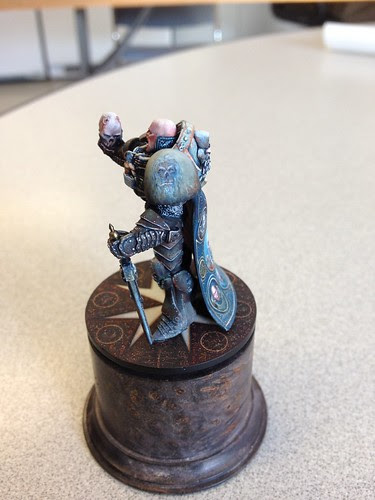 Note the freehand portraits on the cloak: 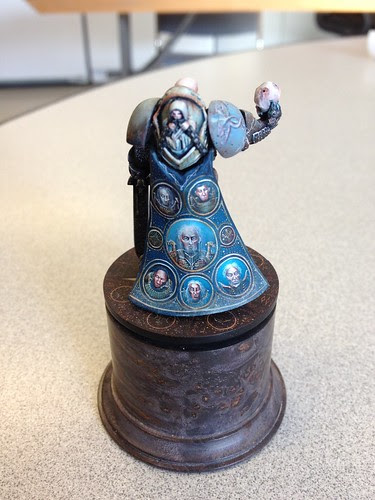 Each portrait is an individual work of art. 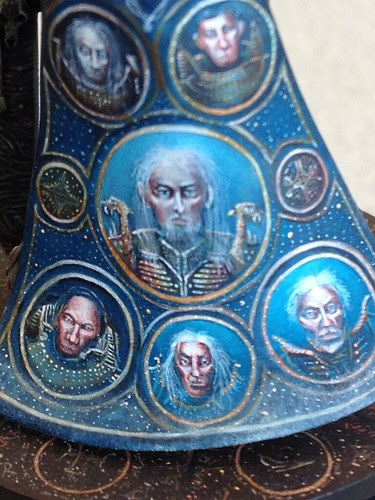 Note the subtle weathering of the armour. 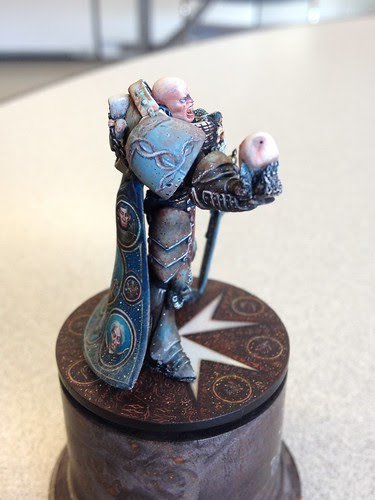 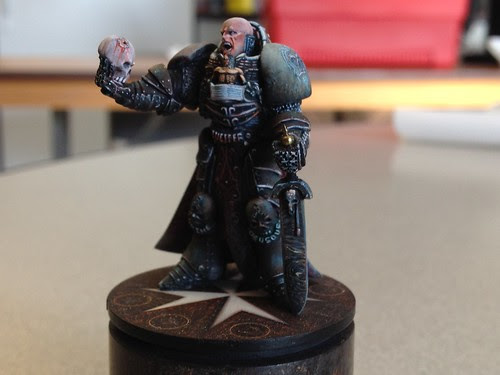 The detail of the face, armour, and sword are visible. Rick sparingly uses Peach Black to paint in 5 o'clock shadow.Note the controlled use of pure white highlights on things like the edges of the armour plates. The sword has a solar system painted on it. 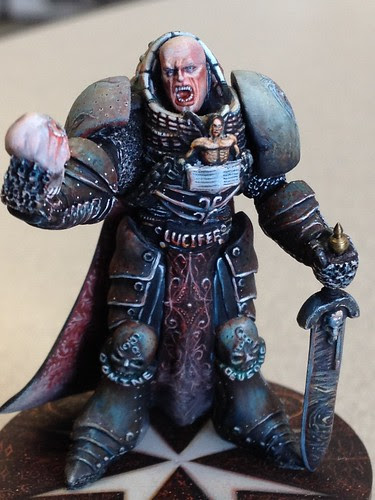 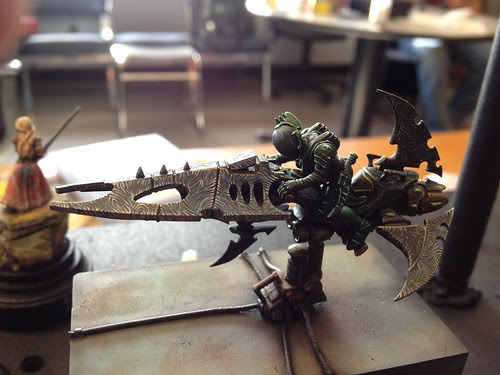 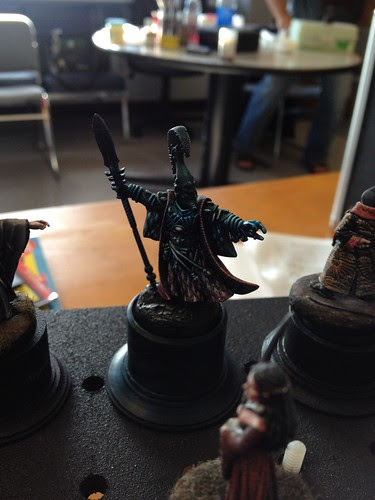 The Farseer's cloak was painted freehand in greyscale, then tinted red-orange with a thin oil glaze. 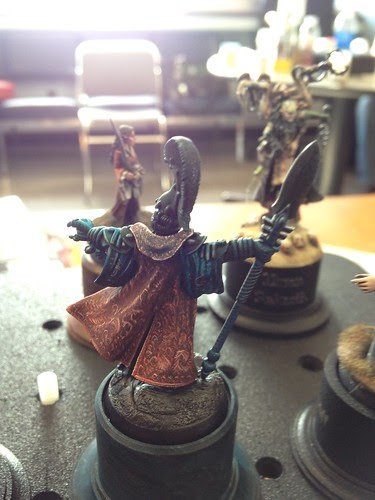 In preparation for the seminar, I finished the assembly of the commander for my too-long-dormant Crimson Fists Crusade Company. The concept is to use the Deathwing rules to re-create the Crimson Fists First (Terminator) Company.

The Chapter Master is a conversion of GW's Lysander, Master of the Imperial Fists (in metal, thank you very much). The arms are from a couple of different plastic kits, the shoulder pads are from Forge World, and the cast resin base is from Dragon Forge. 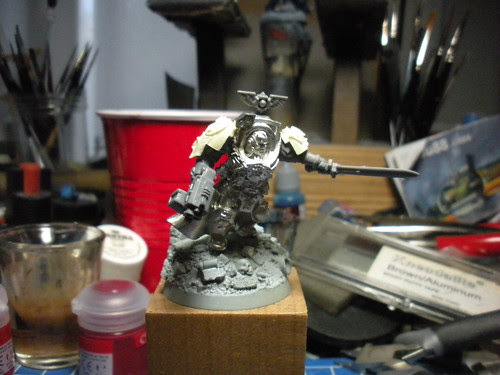 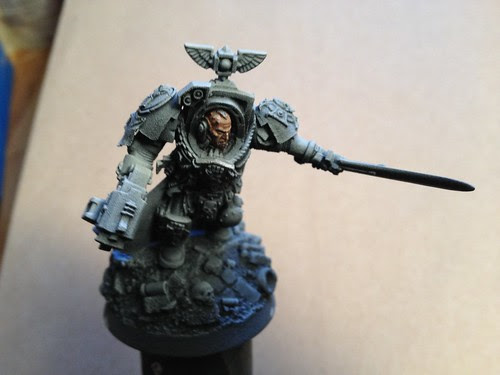 I really like the Quinacridone Burnt Orange; a slightly warmer tone than my usual Schminke's Burnt Sienna. I used almost pure Quinacridone Scarlet to shade the nose and cheeks. Also, Peach Black seems to work better as beard shadow than Winsor & Newton's Indigo that I normally use.

I have been working at home on a couple more squads of Terminators. There's a few conversions in there, mostly using plastic and resin arms/shoulders on metal bodies, with Dragon Forge bases. 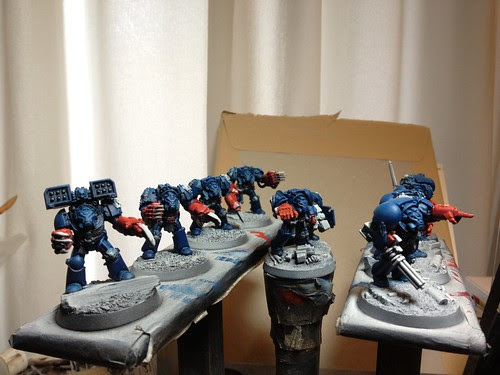 Below is the first squad's Apothecary. 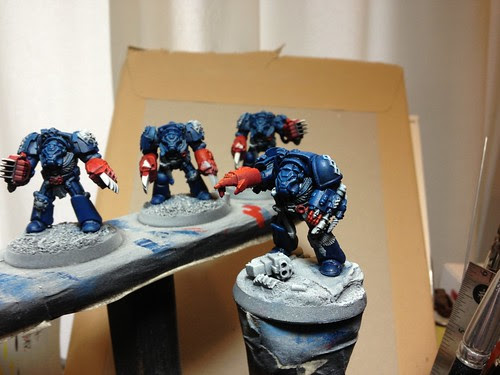 Some decent mid- and long-range firepower, good anti-aircraft capability, and a mix of different close combat loadouts that provide both low-AP resiliency (Storm Shields) and the ability to strike at Initiative 4 (Lightning Claws).

Holly smoke, that cloak is awesome!