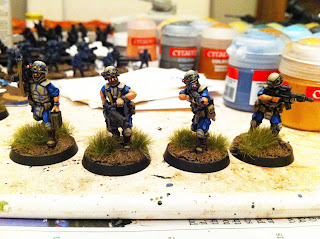 As Monday Night Football grinds on (and the terrible replacement officials continue to bungle calls - will be interesting to see if the Packers can pull this one out) I have finished a few more of the 28mm sci-fi troops acquired via Frank Hammond.  These models are really, really nice sculpts and are quite fun to paint.  It has not gone as fast as I expected, but that is OK. There are a lot of nice little details on the figures that are slowing down my standard mass production approach.  And it's not like I need to get these things out on the table urgently.


You can still see the glue drying in some of the pics...the "tufts" of grass are making the ground work on the bases a lot easier.


I have finished 10 of the 24 models so far.  I will do one or two vehicles (they don't really need too many vehicles as they will match the pile of tanks and APCs I have already painted for my 40k Imperial Guardsmen) and then return to my 15mm Syrians and Israelis.
I am hoping to get these guys stuck into a Tomorrow's War game sometime soon - one of the good things about that game is that you can play without too many figures!
Posted by Greg B at 10:16 PM

Those do look great. How about pitting them against Hammer's Slammers?

Thanks guys!
Dallas - that would be a great way to "break them in" on the table. Would be awesome to get your Slammers' out on to the table too.

ps The guys at hockey were all talking about the call in the Seattle/Green Bay game... yikes!