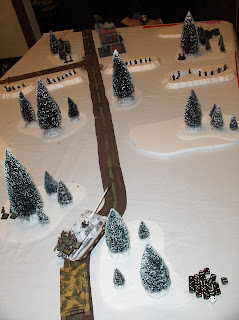 Last week's game was a 28mm "Battle of the Bulge" scenario featuring some of the first WW2 models I ever painted (Battlehonours Waffen-SS) against some of the most recently painted (US Infantry). It also involved further amortization of some snow terrain I made for a recent Star Wars "Hoth" game. 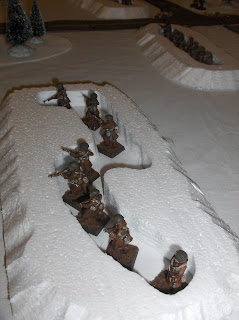 The scenario I used was from Warhammer Historical Games' "Great War" book, a source I've mined before for straightforward scenarios. The Americans were defending, of course, and deployed mostly in snowy foxholes and trenches, and in a ruined building. The Germans were attacking and their objective was to clear the middle two feet of the table of any American infantry units, within a time limit of 6 (extended to 8) turns.

Due to the snowy terrain I ruled that vehicles could not exceed their "slow" speed while moving off-road. In addition, the Germans were subject to a "low fuel" rule - each turn a vehicle moved a d6 was rolled. If the result equalled or exceeded the current turn number - no problem. If not, another d6 was rolled and on a "1" the vehicle was out of fuel and immobilized. 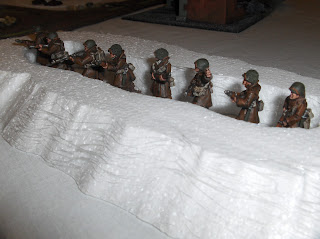 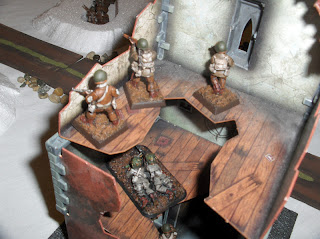 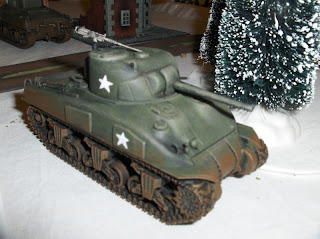 The Americans had a couple of Shermans to face the German armoured onslaught. 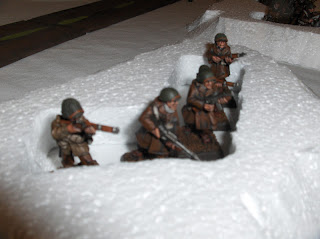 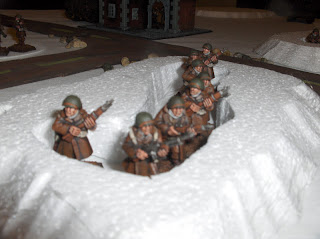 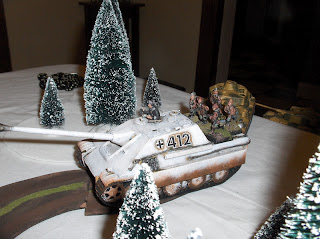 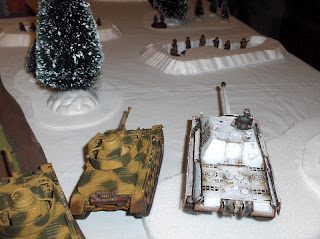 The German vehicles rolled up the road and peeled off to confront the GI's in the trenches to the right. Some bad die rolling from me and Brian, combined with "on fire" dice as usual from Frederick, mostly stalled the German assault. Frederick also got some of his own back from a legendary Fawcett battle - the "Flight of the French Generals Squad" - by destroying a German tank with lucky shots from his machinegunners. (In the French Generals battle Frederick had had a German halftrack immobilized by lucky shots from French riflemen). 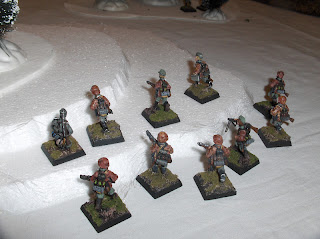 Waffen-SS squad on foot running towards the GI's on the left flank. They were stopped by concerted American Garand fire. 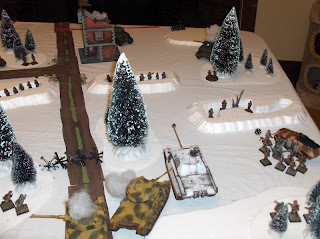 Final assault on the trenches at right. Brewed up MkIV's and a destroyed Sherman in the background. 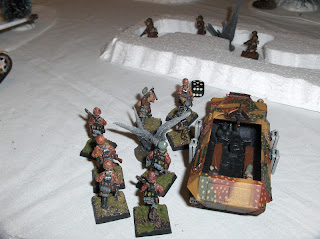 Grenadiers pinned down by the surviving GI's. 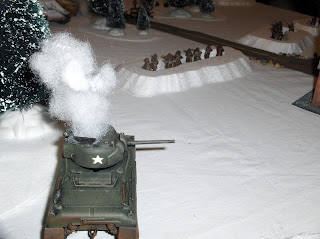 Jagdpanther achieved some measure of vindication by lighting up a Sherman or two. 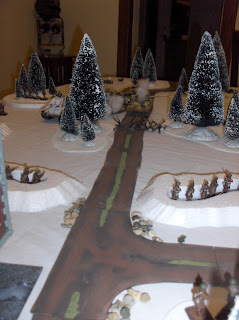 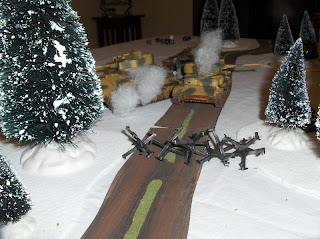 At the end of the night the Germans had failed in their mission. I take pretty much full responsibility as the scenario designer for the fact that the game wasn't too close, notwithstanding the dice roll quality disparity. I just gave the Americans too much stuff! For me, the perfect result in a game is one that is decided in the last turn, where momentum ebbs and flows and the outcome is always in doubt. For an "attacker/defender" game like this, the trick is to ensure that the defender is stretched a bit thin and not able to cover every hole adequately. In this game, all Frederick really needed to do was sit in the trenches and let the Germans come to him - he didn't have any really tough decisions to make. If we play again there will be more Germans and fewer GI's. Plus, the Garands rate of fire made every GI shoot like two Germans, which didn't help the balance. Perhaps a change to "5+" marksmanship for the inexperienced GI's? However, in the end I suppose that the Germans didn't win the battle of the Bulge in 1944/45 either, so at least the result was historical ;-)
Posted by Dallas at 1:54 PM

I made the same mistake in a CrossFire game I ran a year or so ago. Playing as the Germans attacking an Allied beachhead in Italy facing that many riflemen is the closest I've come to crying in a wargame ;)

Glad to see the legend of the French Generals lives on...too bad we didn't have the blog going then.

Sounds like a good game. Dont bwat yourself up too much about game balance. It's a difficult thing to judge when the defenders are entrenched. The actual preferred military rational of attacking with at 3:1 odds in favour doesn't really hold up well in most wargames. As long as everybody had a good time, what does it matter?

The fire from semi-auto Garands certainly gave the Americans a definite advantage (as they did have in actually combat). Perhaps the Americans could have a choice of two shots at 5+ marksmanship, or one shot at 4+. Another thing that we seldom see in scenarios is the effect of artillery suppressive fire, something that would not necessarily kill the guys in the trenches, but prevent them from firing at advancing infantry.

Which rules set did you guys use for this game?

I am struggling to find a good 28 mm scale WW2 rules set :P

Soooo many opinions from so many gamers and the discussion nearly always ends up in a sledging match.

Hi Allen! Thanks for the comments and question.

For rules we use a set that Greg and I wrote called "Blitzkrieg!". Not commercially available yet but I've been working on getting them out through blurb.com. I'll certainly be blogging on that when they're ready, so stay tuned...