Earlier this month I did a post on the plastic 15mm T-34 kit from Plastic Soldier Company.  Here are some pictures of another Plastic Soldier Company product - German Panther tanks, recently completed as a final entry for Curt C's incredible Analogue Hobbies Painting Challenge.  Like the T-34s, these are also in 15mm scale.

You get five models in each box - and parts to do them as either "D", "A" or "G" variants.  You also have options for stowage - spare track links, fuel cans.  You can put a tank commander in the hatch, and mount an MG on the commander's cupola.

The Second World War is a period of great historical interest to me, and I try to read up on it, but I am constantly baffled and confused by the progression of the various versions of the Panther tank.  I think the first one was the "D", then the "A" followed, with the "G" coming last.  I wanted to try at least one of each variant, but do the balance of them as late-war vehicles.

I think the "D" version first saw action at Kursk (well, if you can count having an engine breakdown and catching fire before you hit the front line as "action").  So I tried to provide it with a camouflage pattern that I have often seen on other vehicles at Kursk - dark yellow and medium brown splotches.  This was done mostly as a test model, just to see how things would turn out while painting these models generally.

The other four tanks would represent a platoon, and I made an effort to replicate a version of the "ambush pattern" camouflage that I associate with the late war German armour.  There are three "G" versions, and one "A" version.

I tried my best to follow the directions, which are still a bit confused (by my standards, I mean - which means they will be fine for everyone out there because I suck with modelling directions), but near as I can tell the differences are slight (from a modeling standpoint) - different hatches on the front, a different cupola on the turret, and different exhausts.   I have spotted some mentions on TMP that perhaps PSC made some mistakes on which bits go with which variant, but I suspect it is fairly minor.

Like the T-34s, I found the track assembly tricky.  Again, this is probably a reflection of my struggles with modeling, and not at all a reflection on PSC's quality. 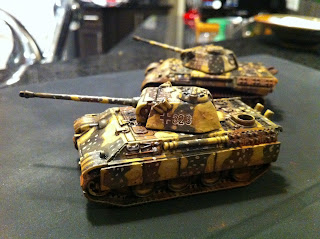 All of the models received decals from Battlefront.  For the four tanks in late-war camo, I thought I would get cute and use some Panzer Division decals.  I applied the symbol for the 20th Panzer Division on the front right sides, just over the fender.  I thought I was pretty cool, but really you can hardly see them.  But at least I know they are there... 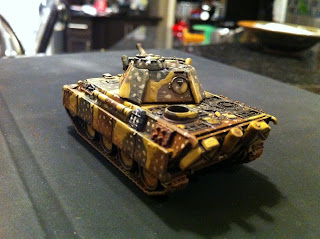 The more I work with PSC stuff, the more I like it.  The detail on the vehicles is excellent.  The assembly is highly idiot-resistant.  They paint up very nicely. They are much, much cheaper than Battlefront.  Maybe the only thing PSC hasn't accounted for is Zimmerit - no big deal for me, but some gamers may feel this would press these models into either the very early stages of the Panther's deployment, or the very late stages of the war when the Germans stopped applying Zimmerit finish to their vehicles.

I don't really "need" more Panthers - even a platoon of four vehicles is plenty in a 15mm game, but I'm sure I am going to paint some more up for fun.  These were a real treat to work on.  I highlight recommend PSC's products!
Posted by Greg B at 7:30 PM

I agree the variants are a bit confusing. I believe you can do historically correct versions from the PSC kit though.

AFAIK: D is the first version, A is the second. G is the third. Very counter-intuitive, and I believe the instructions have the order wrong. Also, some early A's had the letterbox MG cover from the D version, while late A's had the round MG mount that also features on the G version.

So it's a bit dodgy, but your Panthers look fine and correct!

Great work! I love PSC stuff too, but have gone down the 1/72 route; the thing that held me back from 15mm was the fact I don't need 130ish troops for £18.Although it appears this is their preferred scale.

Looking good dude... need to have some solid camo to hide from Allied air power!!

These look awesome. I've been debating picking some of them up. The only drawback for me is the lack of zimmermit.

These look really great! I just bought a box of these (15mm) as my first PSC purchase, I hope mine turn out as well as yours. I like the look of the Battlefront decals you have used, I may have to get some of those myself!

Thanks Mick - I think you will really enjoy the models. I have another box brewing in the painting queue myself, and I'm looking forward to working on them.