Continuing with the 15mm WW2 armoured round-up, here are another couple of models I finished while on vacation - a Panzer IV-H and a Tiger 1E, both from Battlefront.  First up some pictures of the Mark IV, followed by a brief snapping of crayons. 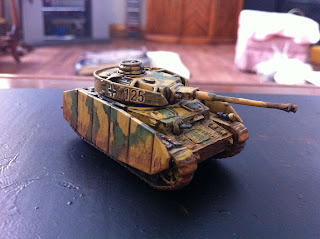 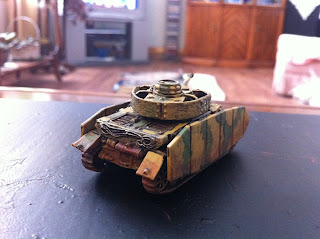 As I ranted over at Analogue Hobbies, the experience assembling the schurzen plates for the Battlefront Mark IV is absolutely awful.  Now I see why there are so many Battlefront Panzer IVs on gaming tables without any schurzen.


The schurzen set comes in plastic. The quality of the plastic is just terrible - very hard, but incredibly brittle.  You need to put eight little brackets together, four for each side of the panzer hull, and EACH ONE broke when I made the cut on the sprue, because the plastic is just terrible. TERRIBLE. And this also assumes that Battlefront has sculpted the proper number of spaces on each side of the Mark IV hull to even mount the brackets (assuming they come off in one piece). This compares to the metal schurzen of the late model Mark III, which work PERFECTLY.

To "mount" these schurzen plates, I just tried to find enough surface area on the sides of the tank and prayed to the superglue gods.  The plates stuck, for now, and while it's a bit silly in that there is zero separation between the plate and the side of the vehicle, it doesn't look too bad.  We'll see how long it lasts. I want to add more Mark IVs to my 15mm armoured lineup (after all, the tank was a late-war workhorse), but I'm looking into other options, or even tracking down some of the "old" metal schurzen sets for use with future models.

OK - on to the Tiger.  This model had a big-time casting flaw in the turret base - not visible while the turret is on, but was such that the turret had to be glued in place.  I know a lot of gamers out there do this already, for a number of sensible reasons, but the eternal kid in me likes having the turrets on my 15mm tanks move for some reason - so this was a disappointment. 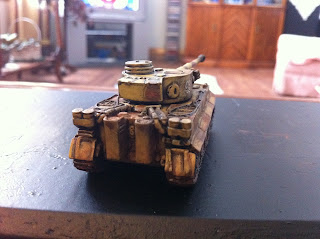 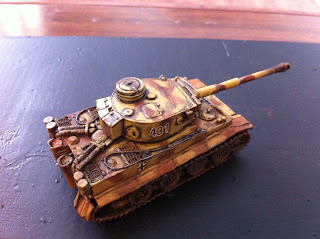 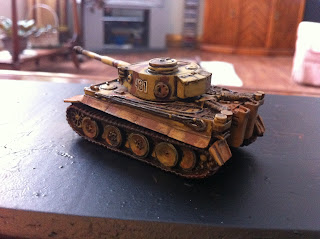 I have now nearly completed the German side for that scenario from "Conflict Of Heroes" (mentioned in this post)- I just need to do up a recovery half-track.  It just arrived in the mail (thank you, Sentry Box!) so I hope to finish that very soon.  Stay tuned for that, and the Soviet side of the scenario! And also coming soon, a change of gears back to Rogue Trader, as the Crimson First "beakies" start to move through the paint shop...
Posted by Greg B at 10:35 AM

I like the paint scheme you've used on the Tiger, where do people get all these cool camo patterns from? are they historical or made-up? if you could point me towards the reference that would be cool.

RE: schurzen: is it possible to use one of the various kinds of angled plastic forms (like you can get locally at Gooch's Hobbies) to make into mounting brackets for the armour plates?

Samulus, books like the "Panzer Colors" series have lots of good photos. IIRC, one StuG looked like it was painted by Picasso...

I actually don't do as much research as I should, and this one was kind of a "test" model.

There are two books I have used - one is called "German Tanks of World War II" by Dr. S. Hart and Dr. R. Hart. This book has a few good colour plates, and lots of neat, dork-type info on the tanks without being too long.

The other I have and really like is called "Wehrmacht Panzer Divisions 1939-1945" by Jorge Rosado and Chris Bishop, and is part of a series that brands itself "The Essential Tank Identification Guide" - not too much text, but lots and lots of colour plates for inspiration.

I am also trying to track down a copy of "Panzer Colours" - many folks swear by it...