It's total cheese, but here are some 15mm Tiger IIs from Battlefront.  These models are from their King Tiger platoon box set.  You get three tanks, and lots of bits for crew, stowage etc.  The bodies and turrets of the tanks already have a lot of "character" sculpted on to them - spots of Zimmerit knocked off from shooting, different bits of stowage etc.

To try and match the character a bit, I decided the commander's tank would look like it has seen some heavy use. I chopped up some of the side plates and used the damaged versions of the fenders/flats around the tracks.  For the command tank (I think tank "100" would be the commander of the first company, right?), I also popped the commander and driver out of the hatch.

I find Battlefront to be a bit of a mixed bag on the sculpting/casting side - and this was no exception.  It was very, very hard to fit the fenders/mud flaps, and the treads had a lot of flash and casting flaws.  But I give them credit for the "everything you need in the box" factor.  If you wanted, you could sculpt every single tank with crew popping out of just about every hatch.  You had options for normal or damaged fenders/flaps for each vehicle.  And you get a decent set of decals, with tactical numbers and insignia for the different Scwhere Panzer Abteilung. 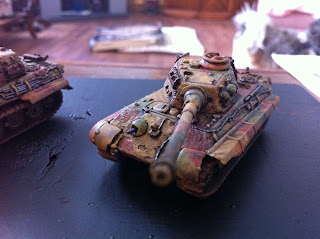 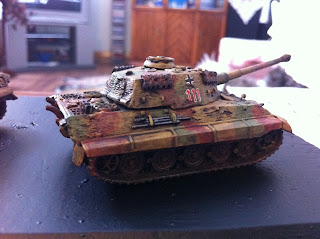 It even comes with three sets of tiny rare earth magnets for the turrets! I don't find they are needed, so I didn't use them. 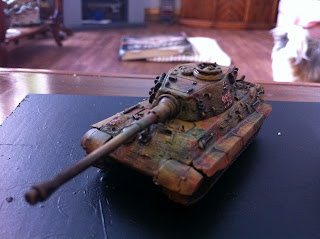 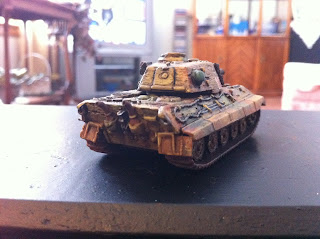 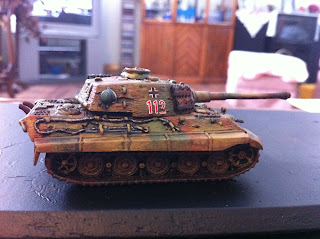 Of course these things were quite rare in the war, and suffered from a number of challenges that few game systems ever acknowledge, such as the tendency to break down etc.  I think Flames of War tries to account for some of the engineering issues around these tanks in their labyrinth of special rules, but in FOW these things still mow down everything in sight. And of course wargamers love to have these things in their collections (or at least I do). 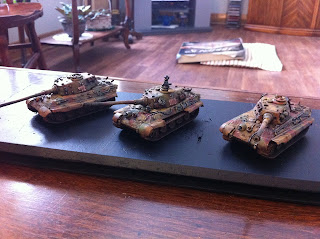 But am I hoping to put a game on at some point where a few of these things take on T-34s and IS-2s until they are out of fuel and ammo? Yes - that would be fun....

These were the last of the vacation-painted vehicles from Sault Ste. Marie. I'm working on a few more WW2 things right now as part of a final gasp in the Analogue Hobbies Painting Challenge - and then it's time to focus on Battle At The Farm...
Posted by Greg B at 10:05 AM

Excellent models and nicely painted. They'll cost the earth points-wise but you can't beat the look on your opponents face when he realises he hasn't got anything that can even scratch the paint on these things, let alone knock them out!

Great job on these cheezwagons. Your camo turned out brilliant. One has to remember these cats prowled in the late war - one good flight of Sturmoviks or Typhoons would probably sort them out...