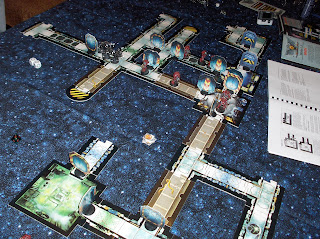 Last night I pulled out Space Hulk to play with the lads. (You'll note that these are the old school first- and second-edition sets, not the latest "Genestealers think they're Spider-Man" version). A couple years back I found and painted a complete set of the original metal Terminators and love to wheel them out to play with as well.

I love the old Space Hulk game - it's simple but not necessarily simplistic, and everyone digs the visuals of Terminators exploring the corridors of a rusty space hulk with Genestealers lurking around every corner.

The first mission we played, Conscript Mike A. and I had two Terminator squads and had to get five Terminators off the board in the designated exit spot. Conscripts Mike F. and Brian ran the 'stealers. Mike A's group of Terminators ran interference for my guys mostly, and got chewed up, but MAN did his assault cannon rock, accounting for 15 or more 'stealers!

The 'stealers were too much for the Terminators, killing six to prevent the Marines' victory conditions.

So we set aup again for a different mission; this time the Terminators had to deactivate a control panel on the far side of the board. We switched sides too so Mike A. and I ran the 'stealers.


One lone Terminator survived the gauntlet and reached the control room, but by that time it was chock-a-block with Xenos and he had no chance.

As an aside, we find when we play that the Terminators rarely (if ever) win! Any commenters willing to weigh in with some tactical hints or suggestions?
Posted by Dallas at 2:01 PM

Space Hulk is a great game. It seems we only experience relative success with the Terminators if they take a VERY slow and measured approach to moving and overwatch. Corners and doors are always a bugger. We usually try to destroy doors with bolter fire so the marines have better lines of sight, reveal 'blips' and they don't get so easily surprised. Nonetheless, nothing is guaranteed and it often spins out of control. Fun!

Been 15 years at least since I played but blobbing up and not allowing any man to lag behind was always a tactic I tried.
(Never helped much tho as the 'stealers always won our games too if I remember correctly.)