On Monday I had a friend over and I put on a Battlelfeet Gothic game. It's an old game that hasn't been supported by GW for over a decade. At the start of the pandemic I had bought a bunch of 3rd party ships to represent forces of the Space Marines and Imperial Navy to represent conflict during the Badab War. the game included 3 Imperial Cruisers against 3 light cruisers, 3 escorts and 1 space marine strike cruiser. 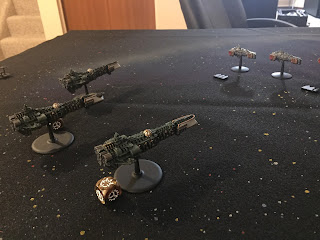 The Imperial Fleet started off by launching some torpedoes. The range was too far and they ended up flying off into space. 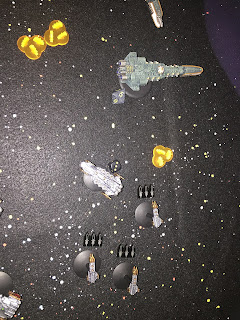 The space marine cobras launched torpedoes as well. Some of these managed to land a few hits resulting in further damage to an Imperial Cruiser which was already damaged form some weapon battery fire. 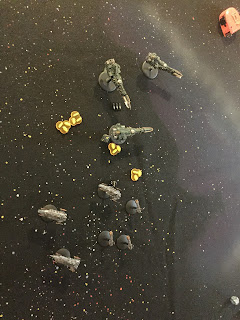 Further damage to the Imperial Fleet. 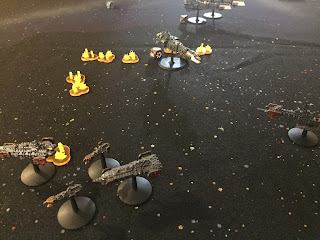 The space marine strike cruiser took a few turns to get into position, but once it did, it started taking a toll on the Imperial Ships. It launched some thunderhawk gunships which delivered a squad of space marines to the ship who proceeded to light fires and destroy my Port weapon batteries. By this point I was able to destroy on space marine light cruiser and a single cobra destroyer. 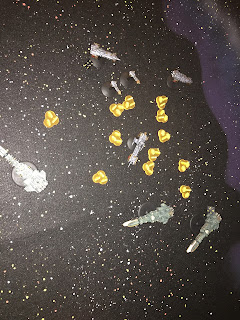 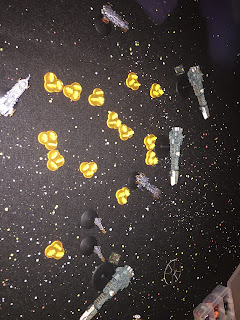 The Imperial Cruisers finally got into position to rake the strike cruiser with lance and battery fire, but dismal dice rolling on my part resulted in only one shield being hit. 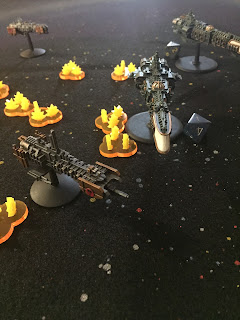 The return fire from the strike cruiser was devastating with the bombardment cannon scoring several critical hits resulting in fires throughout the ship and a destroyed bridge. Only one hull point remained, which was probably going to be lost to the fire. 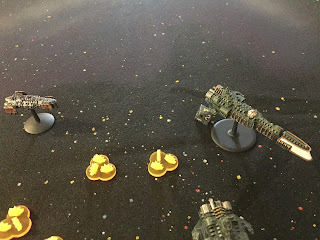 My second cruiser fared little better and was bombarded by torpedoes from behind, resulting in massive damage. 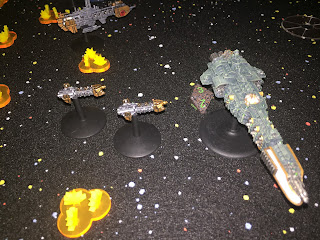 My final functioning cruiser was hit in the side by the remaining space marine cobras who managed to let off a torpedo barrage which crippled the ship. With all 3 cruisers crippled and facing destruction, I conceded the game.

That's great Mike - can't say what I envy more - just playing any game at all, or staging one of the great classic games, Battlefleet Gothic! Really cool.

And the only GW made item in the game are the order dice. Conveniently the order dice from adeptus titanicus are basically recycled from battlefleet gothic.