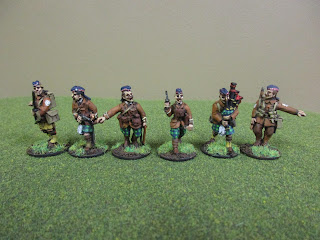 Back at it again after a time away from the brushes... these wee lads had unfortunately languished half-completed for far too long. They are, of course, the 1914 Scottish Command pack (B104) from Great War Miniatures. 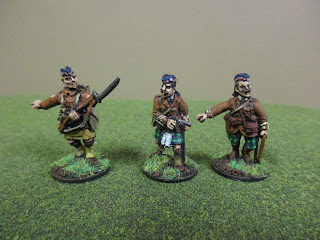 I have a load of mono-posed early-war Highlanders from Foundry, but since they never made command figures in Highland rig I had to cast about for some from another manufacturer. This is unfortunately a "tall order" (heh) nowadays, for the Foundry Great War range (advertised in their catalog at the time as "26mm models") are unfashionably undersized by 2021 standards. 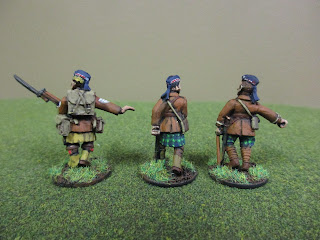 So, I decided to take the figures I could find nearest in size and style, and do what I could to shrink them, which is to say, not much. I filed down their metal bases to paper-thinness and based 'em the same as their Foundry comrades, but they're still noticeably bigger. Oh well. 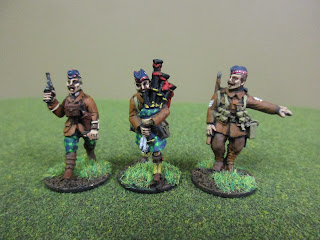 They do look cool though. In the pack you get two rifle-toting sergeants, one officer with a cane, and two with revolvers. The officers wear a mix of kilts and trews with puttees, with Glengarries all round. I painted the kilts and trews in a quasi-Black Watch sett so hopefully the lads will go easy on me if they're ever fielded as a unit that sported a different sett. 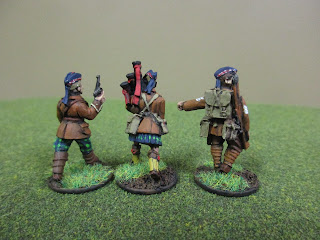 Of course their other gear is pretty much standard Imperial/Commonwealth kit so they can fit in most anywhere. 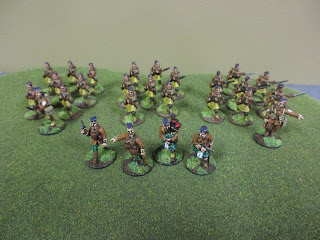 Here they are with the rest of the platoon. I would say this command pack was fun to paint, and they were, but I'm so glad I upgraded my brushes before attempting the tartan. The superfine Kolinsky sables worked a treat.

Well that's it for now, hope everyone's staying safe and getting vaccinated.

Great work, Scotland for ever !

Great work on these figures dude.

Lovely work on them all!

Good job on the tartan!