This is the last of my Lord of the Rings mega-projects, and the one that took the longest. I started this just after I had completed my Elven Heroes of Rivendell and Lothlórien back in April. The first company of orcs took approximately a week to paint, the second company took two, and the third nearly a month and an half. It was a combination of burnout after cranking out nearly 300 minis over the winter, plus the lure of longer days and nicer weather that pulled me away from my workbench. However they are now complete - three companies of Mordor Orcs each consisting of a captain, a banner, four bow, four two-handed weapon, eight spear, and eight hand weapon and shield, 78 minis in total. 34 are the newer plastic figures, while the rest are all metal, including 38 'old school' releases that I picked up secondhand about the same time as I bought my metal Dwarves.
All the figures were mounted on their bases, and sand and pebbles were glued on before priming everything black using a rattle can. The paints were primarily Vallejo water-based acrylics using lots of different shades of gray and brown with the occasional muted red, blue, or olive green. Once the base colours were applied the figures were treated with Army Painter Strong Tone Quick Shade. I then painted the bases and applied some pale green flocking to give them a unique look, different from my other Lord of the Rings armies. Once all the ground work was complete, they all got sprayed with a few light coats of Rust-Oleum Matte Clear spray to take down the shine left by the Quick Shade. I still have an armoured troll waiting in the wings to supplement all these orcs to provide a serious threat on the battlefield for the forces of Mordor.
Numerous, cruel and utterly incapable of redemption or compassion, the race of Orcs is nonetheless sprung from the same stock as the immortal and graceful Elves. Indeed, the first Orcs were once Elves, yet their fate was to be a very different one to that of their brothers after Morgoth's taint fell upon them. These ruined beings swiftly multiplied, as all unwholesome things are wont to do, and their numbers fed the armies of darkness, first of Morgoth and then of Sauron.
In the late years of the Third Age, Orcs are to be found in all the dark places in the world, from which they pose a constant threat to the Free Peoples. Fortunately, the fractious and quarrelsome nature of Orcs ensures that without an exceptional leader, or overwhelming numbers, they are a poor match for the well-trained and organized armies of the western kingdoms. It is only when under the command of one of the Nazgûl or another of Sauron's dread lieutenants that the mailed first of the Orc becomes a thing of power, for Orcs fight with unceasing fury when they fear that which is behind more than that which stands before them.
Radbug's Ruffians - for the captain I used a 'Grishnákh' figure to which I added a shield from my bits box. (On a completely random note, Grishnákh is left-handed.) 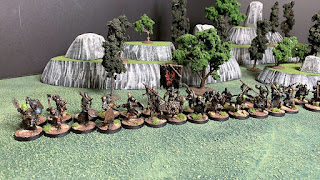 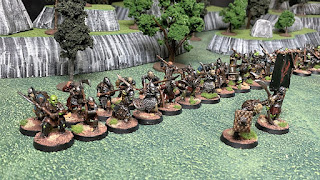 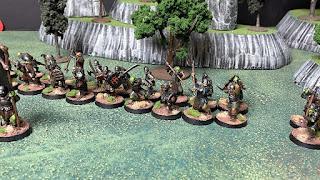 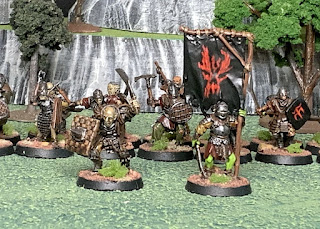 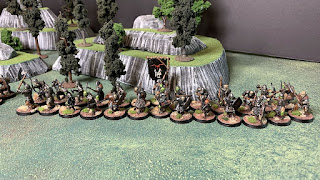 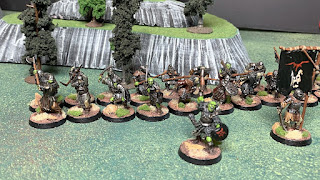 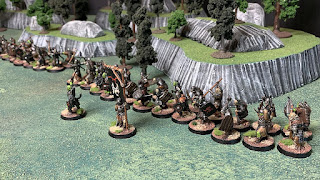 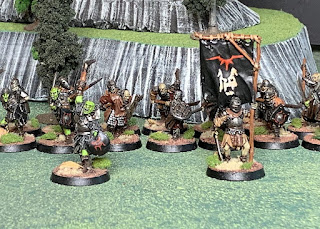 Shargo's Snagas - for the captain I used a 'Gorbag' figure to which I added a shield made from a small thumbtack. 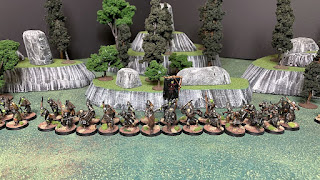 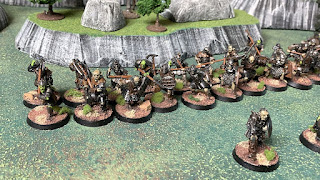 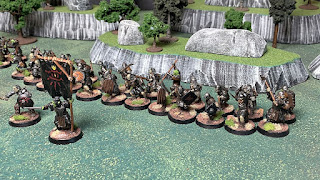 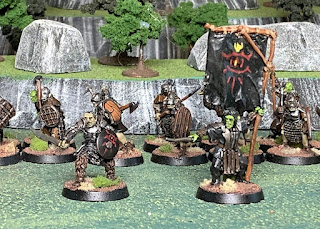 I am happy that these are finally off my workbench, and not mocking me on a daily basis. Now that things are starting to open up a bit more locally, I am going to take a break from Lord of the Rings painting for a while, although I hope to be motivated enough to do some Bolt Action figures. I have a few boxes of plastic Russians that need attention.

Like these a lot and the muted theme works a treat.

"Taking a break"? I am trying to think how you have any LOTR figures left to paint! Well done.

Great looking horde. I have a substantial collection of plastic LoTR orcs that I am looking forward to working on during the next AHPC.