Several years ago Pam got me a set of hockey players from Impact! Miniatures. I'd thought it would be fun to paint them to use in some kind of tabletop hockey game. Of course they sat in their box for... some time, until I recently decided to get cracking on them.

I should say that the sculpts definitely date the teams to a certain period in the history of the National Hockey League, mainly due to the style of the goalies' equipment. This type of gear was worn in the period between the late 1960s and about 1980 or so. The only anachronism with the equipment worn by the players, though, was that every Impact! skater was sculpted wearing a helmet, and helmets were definitely not in general use in the NHL during that period. Some players wore them, but they were definitely in a small minority. So in order to keep a consistent and historical look to the teams (which I had determined would represent the Montreal Canadiens and Toronto Maple Leafs of the 1975-76 NHL season) I had to cut off most of the helmeted heads and replace them. For this I used the excellent bald head sculpts sold by Victoria Miniatures, on which I sculpted some 1970s hockey hairstyles and the odd moustache, using greenstuff. Above are the Canadiens - forwards Guy Lafleur, Pete Mahovlich, and Steve Shutt; defencemen Larry Robinson and Serge Savard; and goaltender Ken Dryden. You'll note that all of them shoot right-handed even though Mahovlich, Shutt, Robinson and Savard were all actually left-handed shots (like me). It would have been way too much work to fix this though.

One of the reasons I picked the 1975-76 teams was that they didn't sport name bars on the backs of their sweaters (jerseys) yet. This was only mandated by the NHL starting in the 1977-78 season, which is a funny story... the owner of the Maple Leafs at the time, notorious cheapskate Harold Ballard, refused to put the players' names on the backs of their sweaters, reasoning that if he did so, no-one would buy the programs he sold at the games. The league threatened heavy fines for non-compliance, so Ballard gave in... printing the names on the backs of the Leafs' blue sweaters in blue, making them unreadable. The NHL clarified the rule to state that the names must appear in a contrasting colour and Ballard was forced to give in. 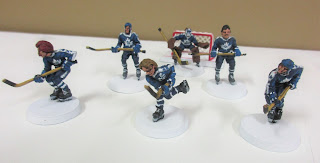 And speaking of the Leafs... here they are: forwards Lanny McDonald, Darryl Sittler, and Dave "Tiger" Williams; defencemen Borje Salming and Ian Turnbull; and goalie Wayne Thomas.
I mentioned some slight anachronisms with the equipment but the real weird thing about the players is the way the forwards were holding their sticks. Normally you'd hold a hockey stick with one hand very close to the butt end and the other midway down. However the forwards were all "choked up" on their sticks, with their hands both close to the middle. I fixed this by cutting the end of the stick off and reattaching the taped up butt end right above their glove. This makes the sticks a bit shorter but it's certainly better than leaving them as sculpted - they just looked wrong. Fortunately the defencemen and goalie are good as-is. 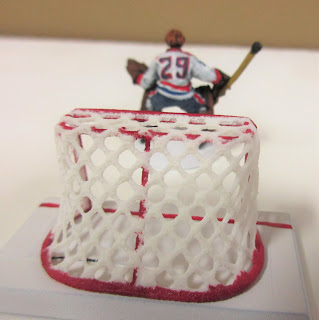 So the next order of business is to find some rules and build a rink. There's a set out called "Trick Shot" as well as a variant of Blood Bowl called "Cross Check". Trick Shot originated in a Kickstarter but the rules can be downloaded for free. It seems straightforward but of course, uses special dice... not a dealbreaker but inconvenient. In any case the first thing will be to convince Conscript Byron to design me a rink... we'll see where it goes from there. And I have also resolved to get some new brushes, as the line work on these models is atrocious. I know a poor workman blames his tools but my detail work has been subpar for awhile now and it's time I did something about that. Maybe some Kolinsky Sables will help.

Anyway I hope you enjoyed the post as something different, and please stay safe.

Excellent job. I am sure it will be appreciated by many Canadian gamers of a certain age.

This is awesome Dallas - great work! That was pretty amazing to replace so many of the heads, and great fix on the sticks as well. They look really, really impressive.

This might be the first game of hockey I ever play!