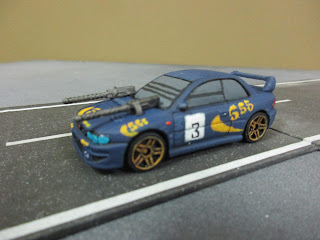 Picking up the brushes for the first time in awhile with a couple of cars acquired for use in the excellent "Gaslands" vehicle combat game. As I am a motor racing enthusiast, most of the cars I paint have their basis in current or historical motorsport competition, and these are no exception. 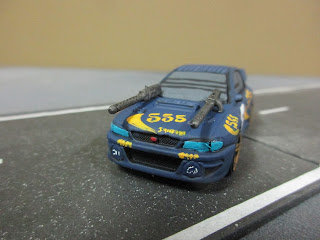 Enthusiasts of the FIA World Rally Championship (WRC) will recognize this car as one driven by one of rallying's GOATs... the late Colin McRae. 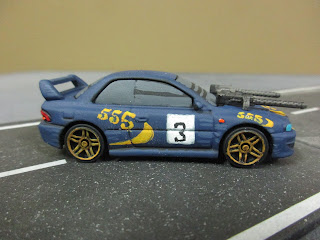 While this WRC Impreza is resplendent in the Subaru team's iconic "555" cigarette livery, Colin and his co-driver Nicky Grist never had twin machine guns to assist them. 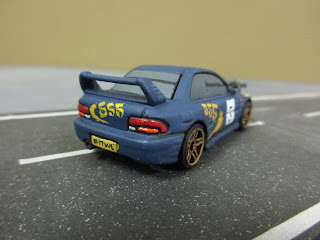 The model is from Hot Wheels and is really quite good. I repainted it in Kantor Blue (analog to Subaru's "World Rally Blue") with 555 livery freehanded. I just got some new Kolinsky Sable brushes from Rosemary & Co and they seem to be working pretty well. 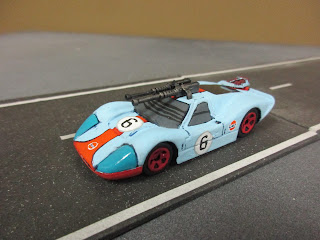 The other car to be painted is supposed to be a Ford GT40, also from Hot Wheels. While the body shape is "GT40-like" for sure, it's not quite right for the GT40 I remember best. In any case, it could only be painted in Gulf Oil livery, of course. 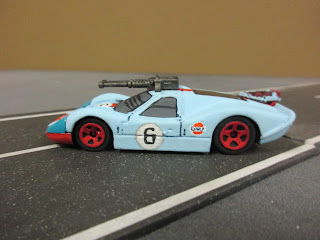 This GT40 is also equipped with twin MGs but also carries a mine/oil dropper out back. I thought it made sense to have a rear-facing weapon since this car will probably be out front anyway. All of the weapons added to these cars are from the superlative "Implements of Carnage" sprues from North Star. 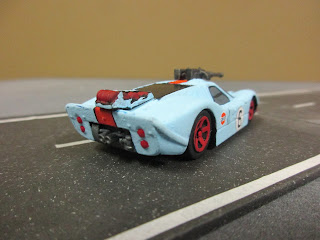 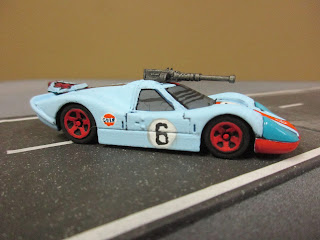 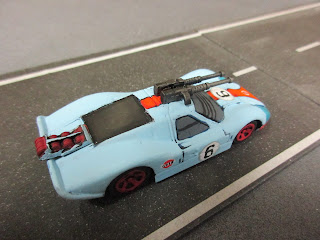 A good view here of the weapons. 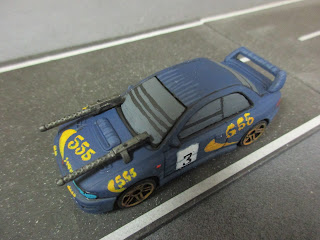 One more pic of the Impreza. I didn't do much (any) weathering on these cars as I wanted to focus on the livery, but it's not out of the question that I may go back and do some.

Anyway there's two more cars painted for what that's worth... hopefully we can get together to play later this year but the numbers here in Manitoba are dire, so that ain't happening anytime soon.

Where did you get the machine guns?

Great work on these Dallas. The new brushes do seem to be working a treat!
The Subaru always looks sharp, but I have to say weapons somehow improve the sportiness...

Those look really slick, Dallas! Dave V. has been collecting lots of GULF models, too. The weapons look great, too - not “Super Distorted” scale, like some I’ve seen.

Thanks guys! Peter - the machineguns and mine dropper are from North Star's excellent "Implements of Carnage" sprue. I'll edit the post to clarify.

Geez! I didn’t even see the mine dropper! That’s awesome!

I must confess I have cheated; all my Gulf cars have been purchased already wearing that team’s livery. I’ve just been cutting them apart to detail them.