Here are a few more 32mm scale figures to add to my Japanese Secessionist Army forces for Infinity: The Game.

The two helmet-less figures are Keisotsu. The word Keisotsu is a title of honor that translates as ‘excellent soldier’, a credit to the level of commitment expected of these rank and file foot soldiers. For those on the lower rungs of the socioeconomic ladder in future Nippon, the most practical enlistment options are the Keisotsu Infantry (Butai) regiments. The Keisotsu are the backbone of the Nippon armed forces and the crux of their operational doctrine.

Kaizoku Spec-Ops respond directly to the Nippon Department of Military Intelligence, and are chosen from among the more unruly Keisotsu whose talents are nevertheless too valuable to waste. This particular model is interesting; two sets of arms are offered, wielding a MediKit or a Spitfire (a type of squad automatic weapon). I assembled it with the big gun option.

Generally you need your opponent's (or Tournament Organizer's) permission to field Spec-Ops figures. However, they add a bit of customization to your force, enabling a model to be fielded with a unique set of skills and equipment (here, the Spitfire, Engineering skill, and a Mimetism visual shield). During a campaign, Spec-Ops may earn points to increase their stats and add skills. 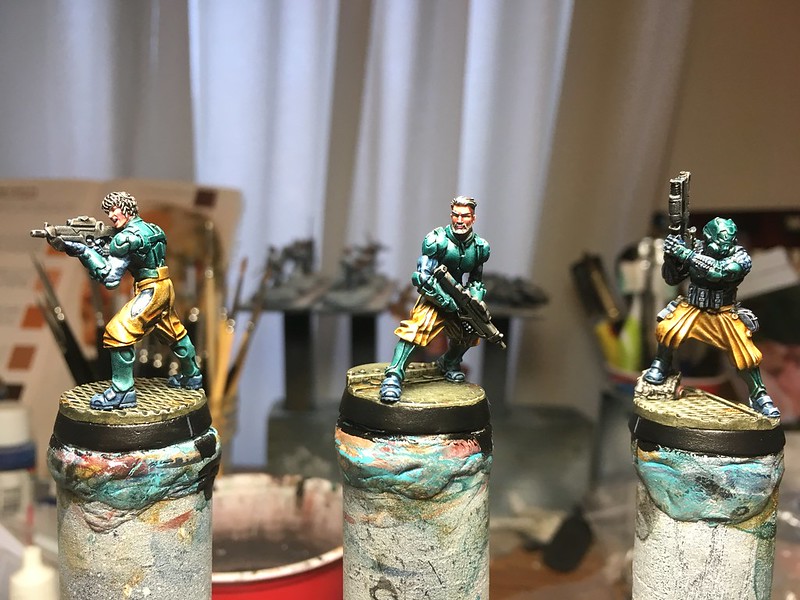 Generally, I really like metal models. The rubber molds allow for a lot of detail. However, this Spec-Ops model had a gap at the left wrist which I filled with super glue, and the left foot was at a lower level than the chunk of debris the right foot was standing on. I found a suitable, multi-level resin base for it.  After assembly and cleanup, I pinned the models with brass wire to cast resin Tech Deck bases from Dragon Forge. I drilled 1/4 inch holes in the bottoms of the resin bases, in preparation for rare-earth magnets later on.

I started with the usual zenithal highlighting. GW Chaos Black primer from a can, then airbrushed GW White at a downwards angle to provide a grey-scale ground. I had some difficulty with paint spatter. I used the same Iwata airbrush/compressor setup and paint dilution as for the figures I painted in the fall. It is drier now in the winter, but I am unsure of the reasons for my difficulties. I resolved them by increasing the ratio of thinner, and cutting down the water. 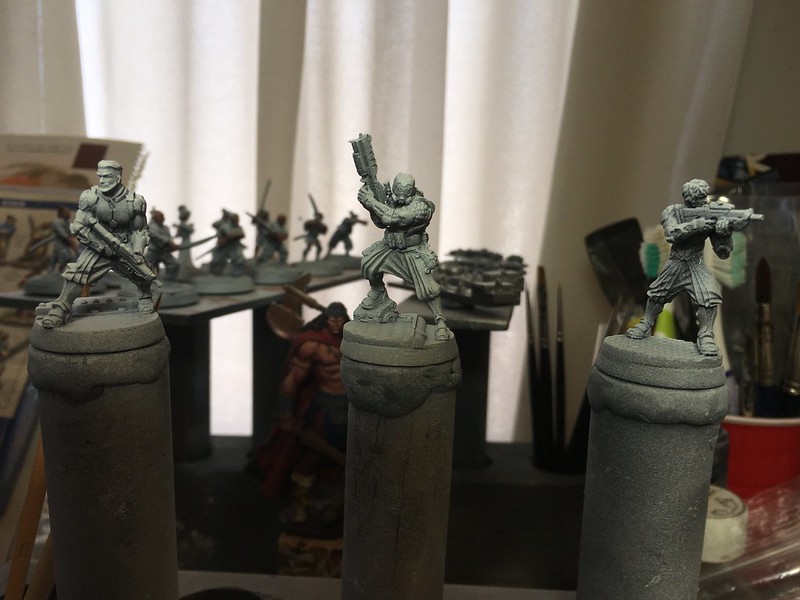 For the Keisotsu, I laid in the base contours of the flesh areas with various Vallejo acrylics. 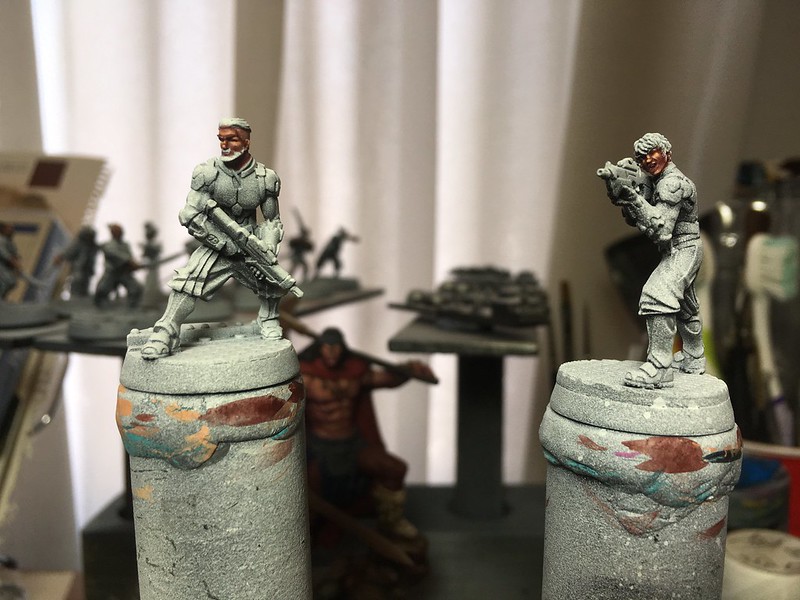 For the bearded figure, this included the lower part of the hair, since I was going to render that as shaved pretty tight to the head. 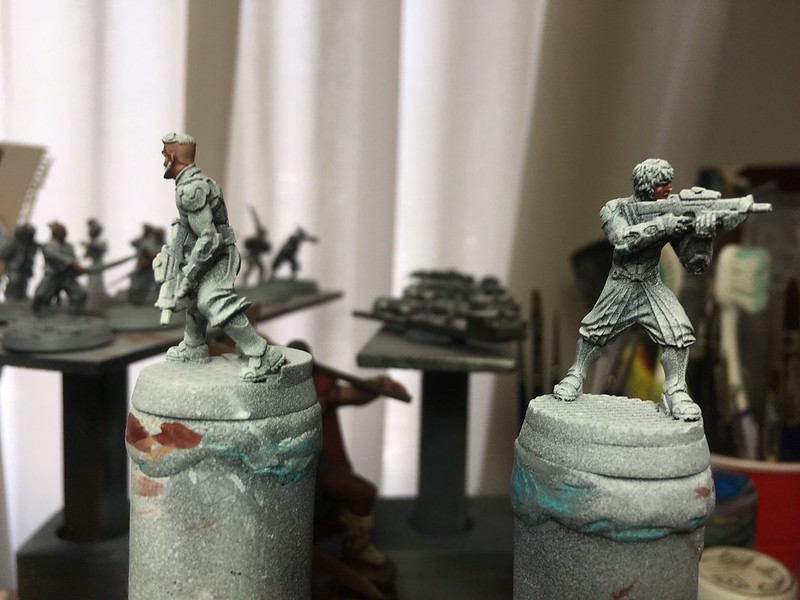 Below, I finished off the flesh tones with various oil paints, to smooth out transitions, heighten hot spots, and deepen shadows. I then used various Citadel Shades from GW, for the base colouring of the blue undersuit/boots (Drakenhof Nightshade), the green armour (Coelia Greenshade), the golden hakama (Seraphim Sepia), and the weapons and hair (Nuln Oil). 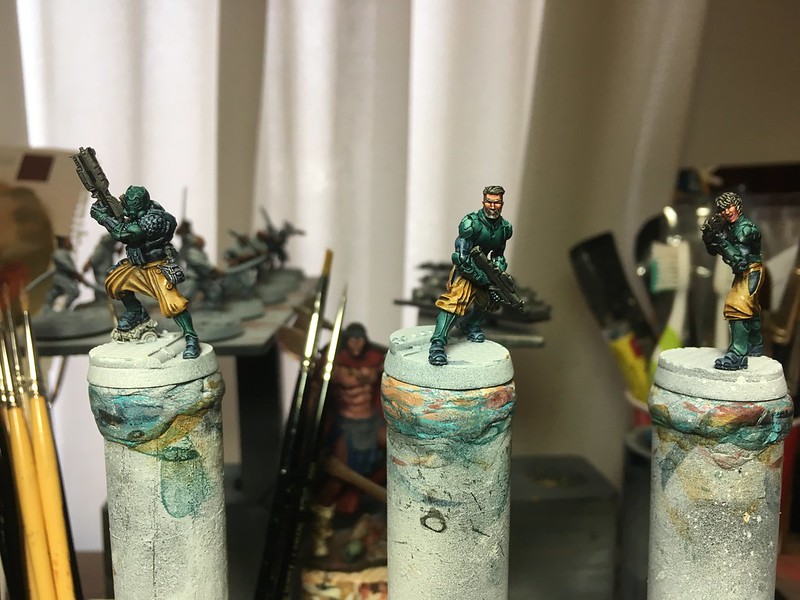 RE: flesh painting with oils: Winsor & Newton Titanium White mixed with Schminke Burnt Sienna made up the basic flesh tone, with some additional flesh shades from Weber (John Howard Sander's Pro Mix Color System). Winton Alizaran Crimson added ruddiness to the cheeks, temples, and lips. W&N Indigo was patted on with Liquin to simulate the stubble of the shaved part of the head. 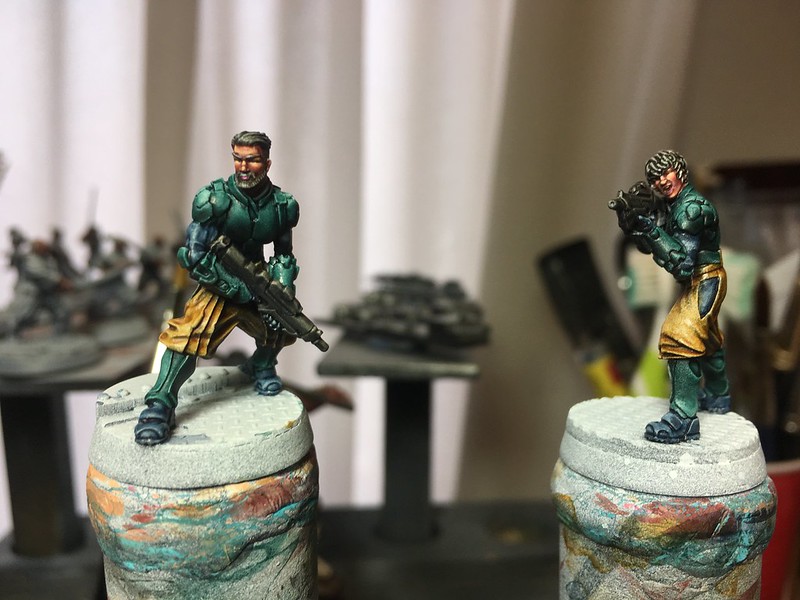 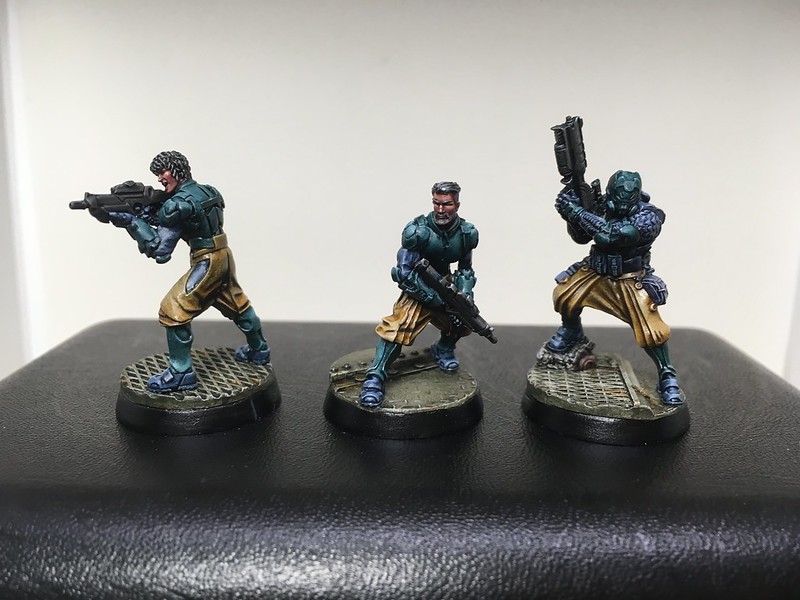 Glazes of Secret Weapon Stone Wash, Vallejo Rust Wash, and some detailing with Winsor & Newton Titanium White and Peach Black oil paints finished off the base tops. Vallejo acrylic black, with 180-degree LOS lines in dark grey, went around the lower part of the bases. The figures were sealed with Tamiya semi-gloss. After removal from the painting stands,  I epoxied magnets into the previously drilled holes, finishing off the figures. The magnets allow for transporting the figures in metal boxes. 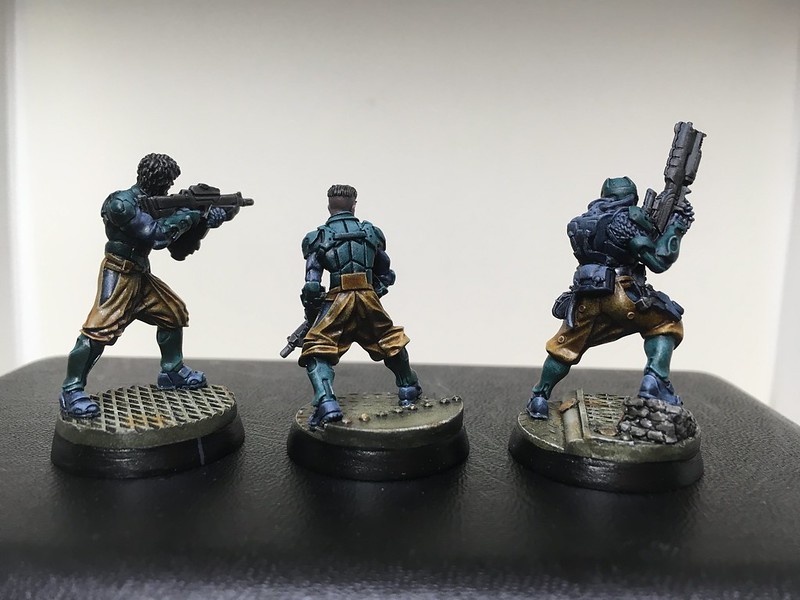 You cannot have enough rank and file troopers. These were a fun addition to my slowly growing JSA forces.

With these Keisotsu done, I only have a couple of figures left in the JSA Sectorial Army Pack left to complete: the second Ryuken (who looks like Batou from Ghost in the Shell, naturally), and the Kuroshi Rider (a straight copy of Celty Sturluson from anime and manga). However, I have also purchased extra rank and file, several heavy infantry, some robots, some more ninja, a biker, special characters, and Conscript MikeA gifted me two versions of Shikami, a deadly combination of heavy infantry and techno ninja. I have no idea when this pile of metal will get done.