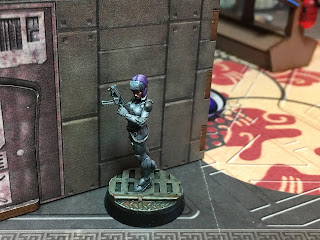 Last March, while Jen and I were out of town on a mini-vacation, playing board games with Conscript Byron and his lovely wife Kim, news dropped about the release of a new(ish) faction for Infinity: The Game. Formerly a sub-faction of the powerhouse Yu Jing, the Japanese Sectorial Army morphed and changed into its present form, the Japanese Secessionist Army (JSA).  The folks of Japanese descent were tired of being oppressed, and rebelled against their Chinese masters, forming their own political entity. This necessitated some changes in the background and play style of the JSA, while keeping their core flavour of being basically sci-fi Bushi/Space Samurai.

This, of course, also meant that Corvus Belli released some new rules and figures, namely a JSA themed Infinity Uprising book and a JSA Army Box set, both of which I pre-ordered directly from Spain. The rules give some neat background and scenarios. The army box contains 10 figures, more scenarios, cardboard terrain, templates, dice, and a paper map (I had the similar Operation: Red Veil map dry-mounted on particle board at a framing store - see TERRAIN below). With the early-bird purchase, I got the three extra figures noted on the website, too.

The new figures are some of the best gaming miniatures I have ever seen. The figures continue Corvus Belli's new engineering practices, with very positive location points and pegs for the assembly of the multi-part 32mm scale models.  They are very much LESS fragile than their Yu Jing counterparts that I painted up last year.

I received all this stuff in early April, and assembled 9 of the models right away. However, with various work and personal commitments, I only finished the first 7 models over my recent vacation, at the end of September.

I finished painting 7 JSA figures: 6 infantry of various classes, and a non-combatant High Value Target. This is enough to play small, 150-point games of Infinity Recon+ or RECON 2.0, small firefight versions of the basic game, based on 2'x3' maps, instead of the tournament standard 4'x4' playing area. The mounted paper map is of such a smaller size, which makes for fast games, and an easily transportable setup for demos at conventions.

I attended a fantastic painting seminar put on  by Sergio Calvo Rubio back in May of this year.  Based somewhat on that experience, I approached the painting of these figures a little differently than I have in the past. The putative light source is now above, and sightly in front of the forehead of each figure; I hoped that this would provide a more dramatic look to the overall impact of the figure. Also, I was more concerned with the basic shapes of the figure - analyzing the cones, cylinders, cubes, etc. that are part and parcel of the figure's shape. I was less concerned with painting every detail. Also, I tried to highlight and shadow according to the texture of what each figure wore - sharp, point highlights for hard/shiny areas like armour and weapons, and softer edges for cloth, and to bring out interesting shapes of major areas.

As usual for my Infinity figures, all my bases are resin cast, from Dragon Forge Design. Secret Weapon and Vallejo washes, plus some oils, weathered the bases.

Below, I primed the figures with spray can GW Chaos Black, and I added zenithal highlighting with my new Iwata airbrush and compressor combo (blowing at ~17 psi; equal parts water, thinner, and pigment): 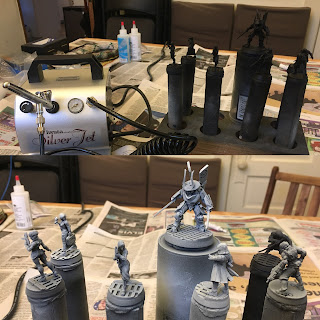 Below, faces done in Vallejo acrylics; ready for over-painting in tube artists' oils (to soften transitions, and punch up highlights and shadow): 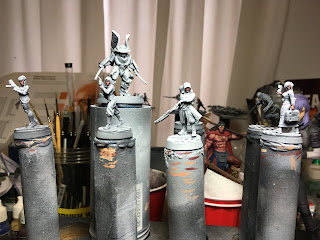 Below, an in-progress photo: 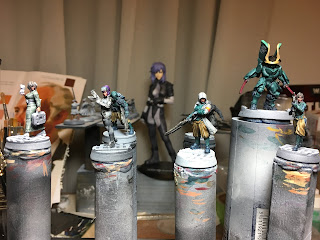 Below, the completed High Value Target (HVT), a Kuge Delegate, a commercial agent representing the elite of a free Japan. She is armed only with a briefcase (full of counter-revolutionary secrets, no doubt), and a small cat. Using lots of thin glazes of GW Thrakka Green over the zenithal highlighting, I tried to emphasize the outline of her body beneath her traditional dress. 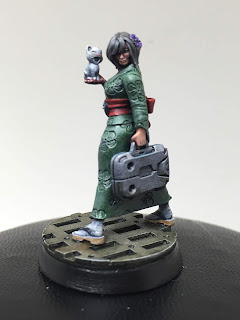 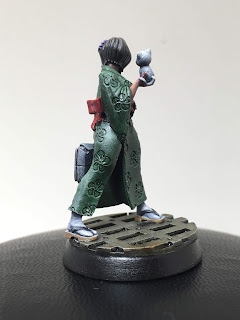 Below, a female Keisotsu Butai; a line infantry figure. Her face is really striking, so I used more contrast than my usual to bring out her expression. I also like how her cotton hakama (split pants) came out. 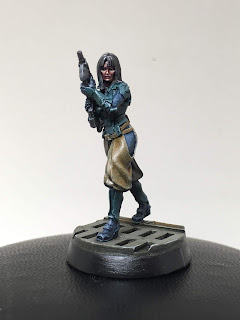 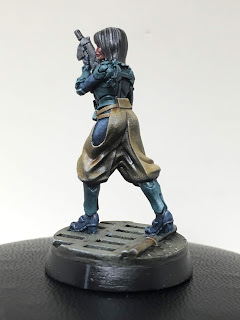 Below, a female Ryuken Unit-9. Able to infiltrate, armed to the teeth, and equipped with an optical disruptor, these individuals are tough, light infantry. This model looks a LOT like the anime character Major Matoko Kusanagi. from the Ghost in the Shell franchise. I again used a lot of contrast for her face. She is looking downward, so I left out the whites of her eyes. Just a few glazes of GW Nuln Oil brought out her musculature beneath her grey cat suit. The purple hair is pure Major Matoko. (This figure is also seen in medias res in the header picture above.) 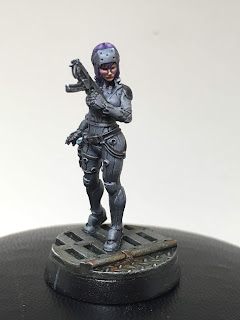 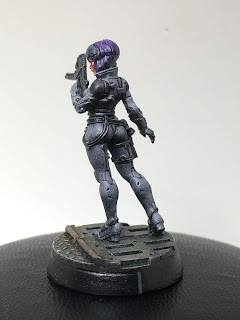 Below, a Kempeitai - a type of political officer, who can immediately take over if the unit's officer gets killed. I painted it kind of like a character in Assassin's Creed, which his coat reminded of. His features are very craggy, which made for easy painting. 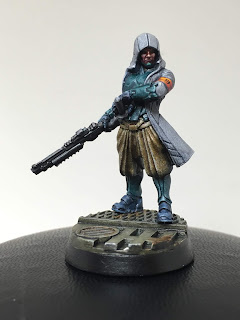 Below, I used the limited edition Kaizoku Spec Ops figure as another Keisotsu. With his extra gear on his helmet and backpack, he is usable as a Keisotsu Forward Observer or Medic. I like how the figure is drawing a handgun; this adds to the strength of the physical connection between the (separate) arm and the torso. 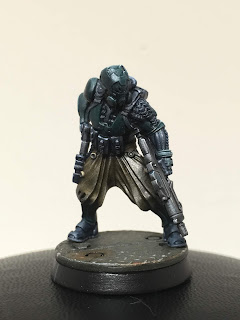 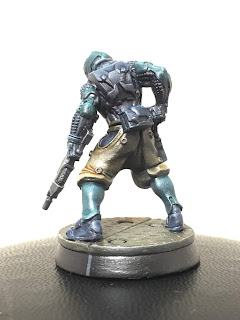 Below, an Oniwaban master assassin. Kept it simple, using Panzer Grey for the zenithal highlighting, instead of white. The figure is basically black and grey, with appropriate highlighting for armoured or cloth areas. The pose is very dramatic. 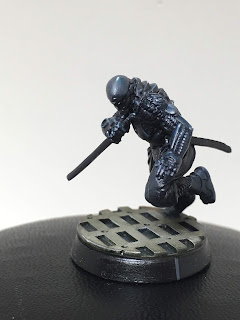 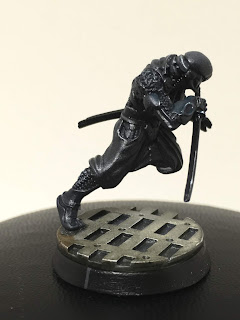 Below, a Daiyokai Dengekitai. Not subtle at all, this is basically a model of a 7-foot tall guy wearing Samurai-inspired armour. The figure stands on a 40mm diameter base. I painted it with various GW greens (Drakenhof Nightshade, Kabalite Green, Sybarite Green) to give shape to the interesting armour and banner contours. I used lots of point highlights on the armour. The undersuit, as for all my JSA figures wearing green/teal armour, was in tones of dark blue and indigo. The large (~3 scale feet tall) brass crest was painted using NMM techniques; the new light source makes for a striking point of focus for the figure, whose features are mostly hidden by his posture and the high-tech jingasa-style helmet. 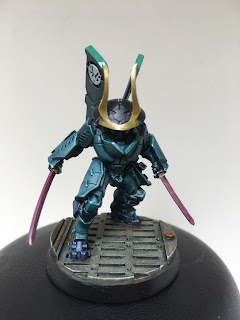 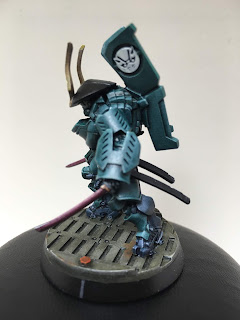 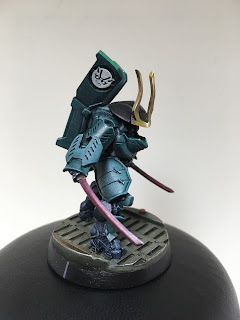 Getting a burst of energy at the end of my vacation, I completed 13 terrain elements - Japanese and sci-fi buildings, lanterns, and a large Torii gate. These were all pre-painted, laser-cut MDF items from Bandua Wargames. I just needed to use white glue and clamps to get them together.

The sci-fi buildings are two different sets of their Q-Building, which can stack or be used separately. The Q-Building Beta better hides the edge seams associated with pre-painted structures.

The Torii gate, lanterns, and Japanese buildings are parts of Bandua's Edo District table bundle of building kits, that my dear wife Jen got me for my birthday. The Edo District components are usable for both historical Japanese skirmishes as well as sci-fi.

Coupled with some pre-existing holo-advertisements, cars, planters, etc., I placed most of the new terrain on the mounted Operation: Red Veil map to create the setup seen below. I think it gives a very Blade Runner type feel. 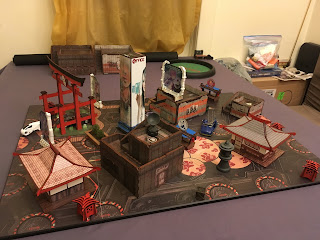 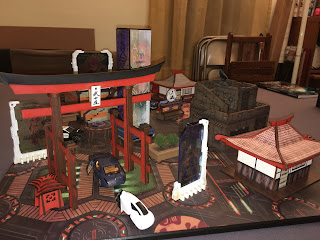 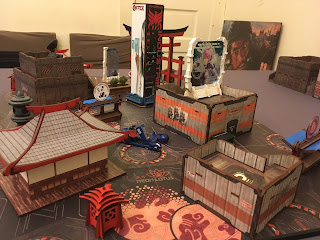 Below, a Yu Jing light infantry figure stands beside a Tourou lantern. 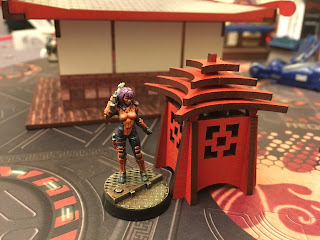 Below, several JSA figures in mid-game action. The Daiyokai is huge! 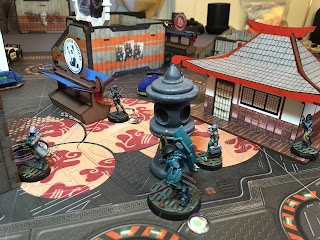 Below, the Oniwaban surprises a Yu Jing heavy infantryman, while an Imperial Judge stands unaware in the distance. 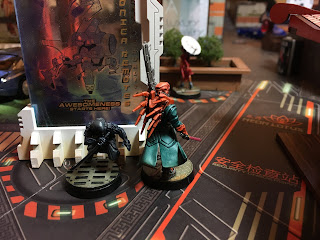 Below, a Kuge Delegate is protected by a Keisotsu. 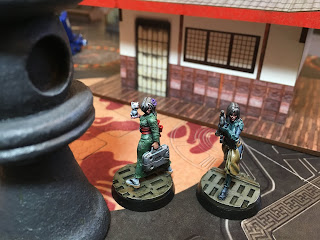 All in all, I am pleased with the progress of Phase II. I now have two painted factions, so I can always have a game of Infinity even if my opponent is new to the game. I think that I only need to paint 4 more figures (mostly heavy infantry) to make a full, 300-point ITS-Tournament-legal force for the JSA.

Fantastic paint job and nice work on the terrain. I have a tonne of infinity figures (mostly unpainted) and terrain (mostly painted) for it and really need to get on and play.

Great work Dave. I love the dude in the huge Samurai armour.