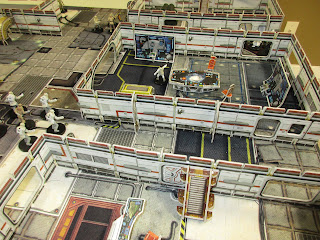 So, last Thursday I hosted an evening of our old favourite brain-free skirmish game, Star Wars Miniatures. I love SWM because the system is simple, we love the setting, I have tons of figures for it, and I have a handy scenario book that I grabbed up when I saw a second-hand copy (it's now long out of print). 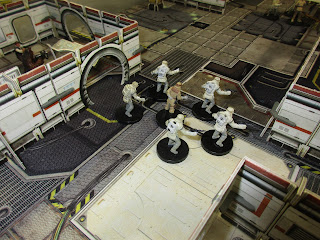 The other reason to roll out this game was that a Kickstarter I'd backed in 2016 finally arrived - this was the Battle Systems Sci-Fi II project. 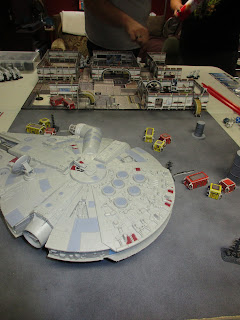 I put together a bunch of the card scatter terrain and some of the walls, and set up a scenario from the Ultimate Missions: Rebel Storm book - Escape from Hoth. 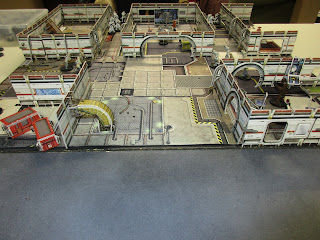 In this mission, the Rebels have two squads of soldiers and Leia, Han, Chewie and 3PO. They must escape the Echo Base command centre and get to the Millennium Falcon before they are "defeated" by the Imperials - two large squads of snowtroopers led by General Veers. The Imperials get 2-4 snowtroopers as reinforcements every turn, as well. 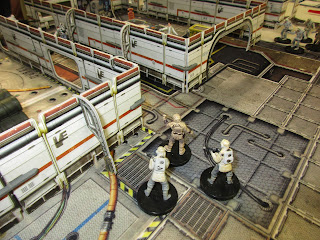 Here's one Rebel squad in position. Leia can be seen in the command centre at top. We used the game mat supplied in the Kickstarter for Echo Base, it seemed to work well. The mat is a high-quality piece made out of a thin mouse-mat type material. 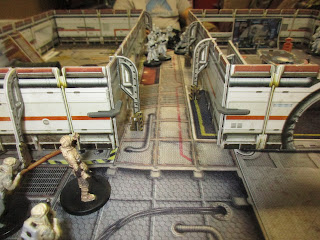 Here come the snowtroopers! The Echo Base walls are all card, held together with plastic connectors. The walls all go together fine but do take time to assemble. The buttresses just hang off the walls and are a nice touch. 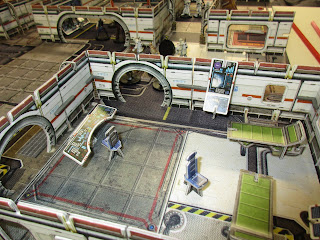 One room in the floorplan is a medical centre. The chairs, consoles and beds are all card from the Kickstarter as well. 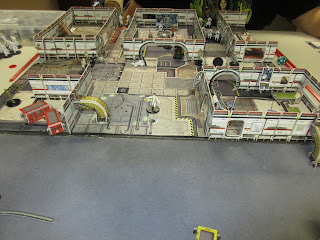 In the scenario, Leia starts off placed in the central command room, with Han and Chewie in the medbay. Leia may not leave the command room until Han is placed next to her - she's too worried about the troop evacuation to be concerned with her own safety. In the pics above and below she's just been convinced by Han to beat it and is headed for the ship. 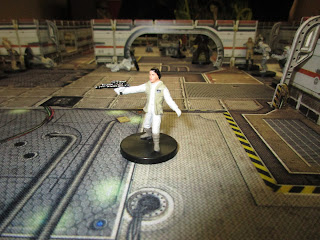 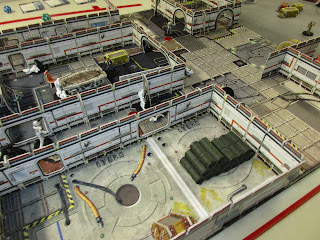 Rebel soldiers desperately hold back the Imperials as Han blasts a snowtrooper. 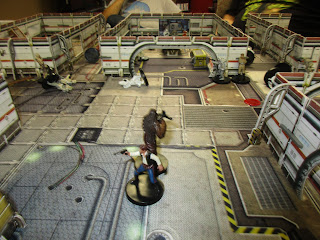 Han was reduced to only 10 hit points by the time he decided to flee. Fortunately Chewie could absorb some damage from the approaching snowtroopers. The rules have an interesting mechanic where most models may only shoot at a model in cover if there isn't a closer target in the open. The Rebel players used this to advantage by moving Han and Chewie together - being screened by another model counts as "cover" so they had to shoot at Chewie instead of Han. 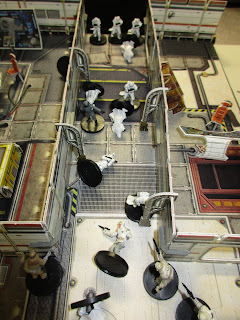 Blood bath in Echo Base as the Imperials flood in. Where's Lord Vader when you need him?!? 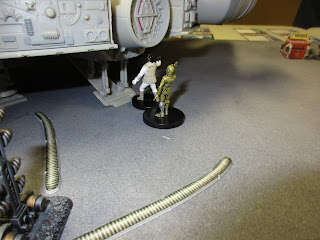 Leia and 3PO make it aboard the Falcon... 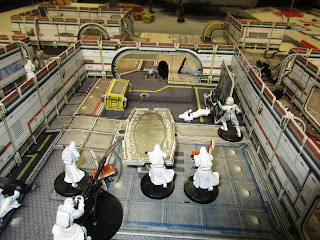 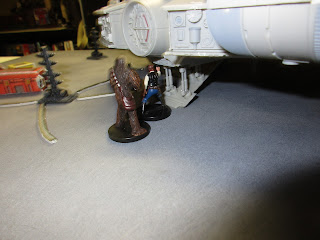 ...with Han and Chewie right behind. 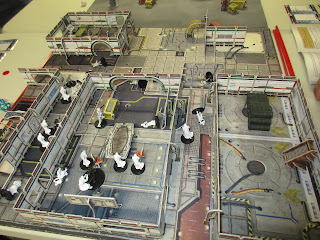 It was quite a fun game, with the result coming down to the wire. Han and Leia were quite seriously wounded with both being only one hit away from "defeat" - however the Rebels pulled it off and the heroes escaped to continue the Rebellion another day.

No word on what happened to the Rebel soldiers who were left defending Echo Base!

Some final thoughts on the Battle Systems terrain - I really like it. There's a ton of scatter terrain to put together but there are lots of videos on how to do this - thankfully (it's not exactly intuitive in some cases). The stuff seems well designed and fits together well, mostly. As far as the walls, they're awesome and it's not up to me to try and design some games that utilize the "third dimension" of multi-storey structures that this set encourages. Looking forward to more games with the tiles, I could really see having some great games of 30K or Necromunda with them.
Posted by Dallas at 11:45 AM

That was a great game Dallas, and the new terrain is outstanding!