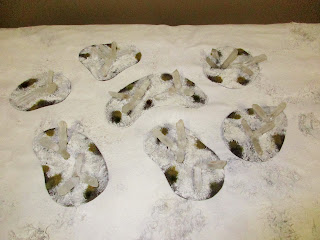 The one thing I find kind of odd about most sci-fi games is that they take place on terrain that looks JUST. LIKE. EARTH. Even back in the RT days the lads used to spiff up their (admittedly rudimentary by today's standards) tables with at least some odd-coloured lichen, to give a minimal impression that we weren't battling over Kansas anymore; but nowadays it seems like green grass and leafy trees are pretty much the norm. 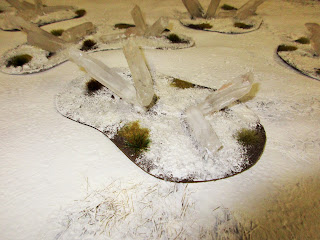 I admit that I am a prime offender! Our tables generally look very good indeed (if I do say so myself) but they mostly look like temperate Earth. Fine if you're playing an historical wargame (great even!) but when you're in a galaxy far, far away or out among the Ghoul Stars and the like, is the terrain you're battling over really gonna look like, say, rural France? 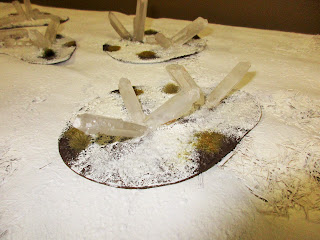 The original idea was to pick up some crystalline shard terrain to spiff up my winter terrain mat for Horus Heresy duty. Gale Force 9 made a good-looking set for their Battlefield in a Box range, but sadly these appear to be out of production and unavailable even on the secondary market. 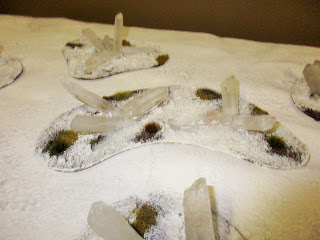 However, poking around on eBay, I found numerous vendors in China selling real quartz crystal shards, for use in jewelry, magic wands (!) and the like. And they are CHEAP - like about $4 shipped for a handful. Once they arrived, execution was straightforward - cut plasticard bases to the desired shape, superglue crystals to the base, apply texture gel, paint it your desired earth colour, paint the snowy bits white, apply snow flakes, static grass and tufts, and DONE. 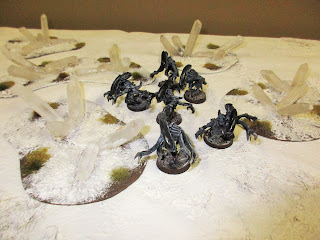 Here are the crystal bases with some Games Workshop Genestealers for scale. Scary! 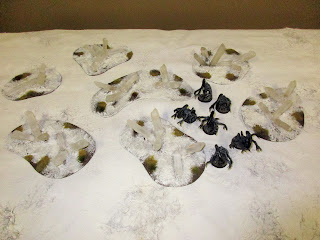 I purchased three 100g packs of crystals and used pretty much all of them in this project. 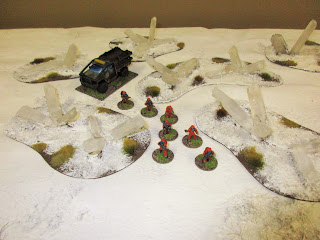 The terrain works great for 15mm too - maybe even better than 28mm. I reckon they would look pretty cool in a 6mm game as well. 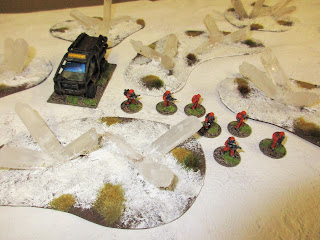 It's not as if I don't have figures to paint, oh no. So the time and energy spent on this terrain mini-project certainly could have been put to use in painting a couple more Iron Warriors, or Adeptus Mechanicus guys, or WW2 Germans, or Indian braves, or... or... but the simple fact is that sometimes when I get an idea, I just want to run with it. Can't wait to get these out in an actual game!
Posted by Dallas at 11:49 AM

Those look great! This is a bit of a Pandora’s box however, as you now have to repaint all the forest camouflage on your vehicles to match the new alien environment. It’s going to be a big project, but I think you can pull it off.
I suppose in the meantime you can just say the logistics department dropped the ball yet again and forgot to send the new paint.

Ha! There is a reason I always base figures with kind of a generic brown scheme. They can fit in practically anywhere! :-)

Dallas - that is brilliant, just really, really cool. Nice reminder that a clever piece of terrain adds so much to any game, particularly sci-fi settings.