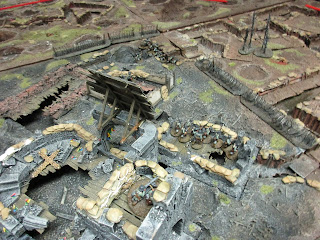 When I think of the Great War from a Canadian perspective, I most often think of the blasted Hellscape of Flanders in 1917-18. We've had it drummed into us from an early age that this was where Canada became a nation. From my perspective now I'm not entirely sure I agree with all of that, but the mud and muck sure are evocative of the CEF experience.

So, the Conscripts gathered last Thursday for a post-Remembrance Day game set in the Hell of Passchendaele, near to the 98th anniversary of the Canadian part of the battle itself.

We set up a scenario from "Over There", the Warhammer Historical supplement to the Great War rules. The book contains a good deal of background material on the various "warzones" of the Great War and actually features "Passchendaele, 1917" as one of them. We selected "Village Assault" from the list of recommended scenarios to play. 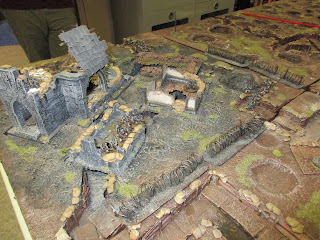 "Village Assault" is set up on a 6x4 table with a village sector of several buildings at one of the "short corners". The defenders (Germans in this case) set up there, whilst the attackers are allowed roughly twice as many points of troops, and set up anywhere more than 24" from a building. The Germans had a three-platoon company and two machineguns to deploy, and two Stormtrooper platoons in reserve. 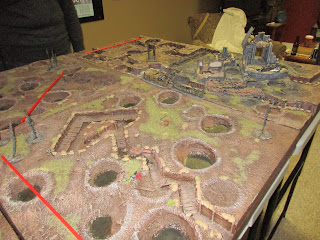 The Canadians deployed their troops - a battalion of two three-platoon companies, a highlander company of two understrength platoons, and two machineguns - outside the boundaries of the red measuring sticks. 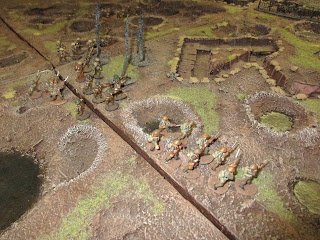 Away went the Canadians towards the outskirts of Passchendaele village. 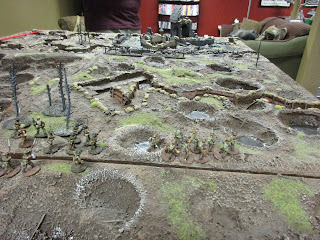 Another angle - the objective buildings in the distance. 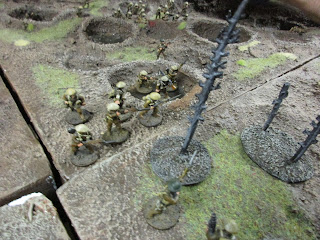 A platoon of Canadians picks their way through the shellholes. In the scenario, all terrain is treated as "Difficult" (roll 2d6 and move up to the distance on the higher die) but if "doubles" are rolled, the platoon loses that many models! Soldiers just fall into mudholes and are swallowed up... 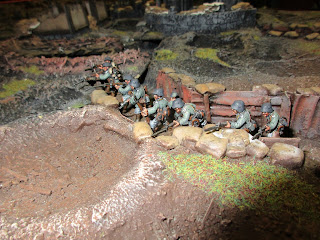 Germans prepared to defend the village of Passchendaele. 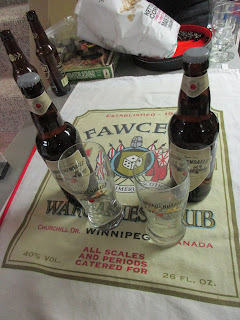 I'd been waiting since summer to crack open these bottles of beer that I picked up in Belgium, at the Memorial Museum Passchendaele. It's brewed locally and helps support the economy of the region. 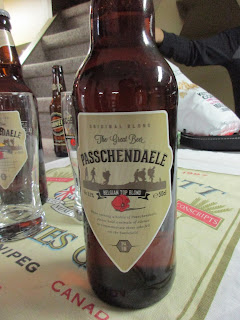 We shared out the two 500ml bottles amongst the 7 or so guys in attendance. I found it to be a pleasant Belgian blond beer with a typical hops note. Recommended if you can find it - at the Museum it was sold as a gift pack of two bottles and two 25cl glasses for less than 10 euros - bargain. 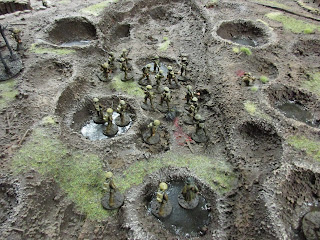 Back to the less pleasant aspects of Passchendaele, the Canadian continue to slog forward. Surprisingly few doubles were rolled for movement and only a few men were lost to the mud. 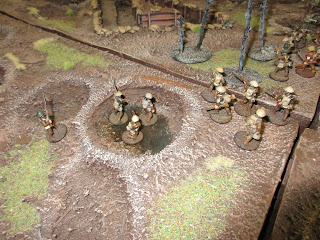 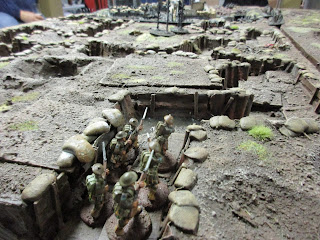 Meanwhile, in the other deployment zone, the Highlanders were picking their way forward through the trenches. 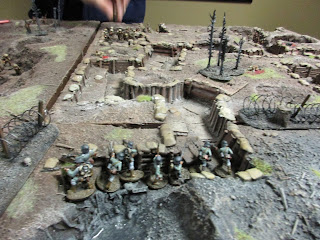 The Germans were ready to receive them and fire was exchanged across the traverses. 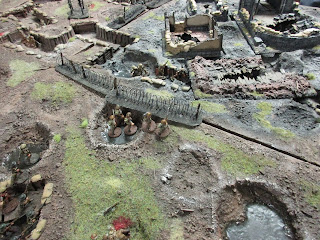 The frontal assault on the village was commencing also. The Canadians had managed to knock out a German machinegun with some lucky shooting and that helped them out immensely. 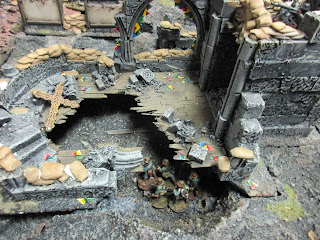 Meeting in the church basement for a reinforcing Stormtrooper platoon. 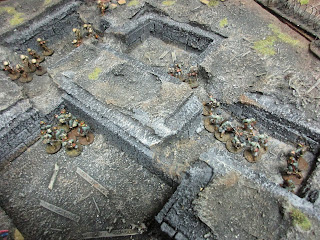 The Canadian objective was to occupy any village building at the end of the game, and they achieved that. One of the reinforcing German platoons arrived a little too far from the village to be a factor in the endgame, and the other was just overmatched by Canadian numbers. Although the Germans made a last stand in the church basement, time ran out on them to throw out the Canadians. 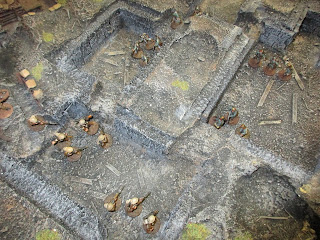 Although I like the Great War rules for their comfortable familiarity (they're essentially just a prior edition of Warhammer 40K, after all) I've found it difficult to balance the scenarios properly. Give the defenders too much and the attackers not enough, and it's a massacre with no chance of success. Give the attackers too much and things can go the other way. I'm told dice can be a factor, too :-)

In any case, we had a pretty fun game with some nice models on good-looking terrain with some friends and some beer, so I guess we'll call that a win all round.
Posted by Dallas at 10:41 AM

Cracking looking table and with beer to boot! Marvellous :)

"Cruelty has a human heart
Every man does play his part"

Indeed... I've never seen a game board that captured the ghastliness of war like this one does. Incredible work and from the looks of it, an intense game.

This was a great game Dallas, excellent job!

Exquisite looking game and beer from the region ad well???? Where is the group from? Edmonton here.

Thanks for the comments everyone! G, we're in Winnipeg, not so far away from you in Edmonton :-)