Another year, another Astronomi-con. This time the event was held at the Holiday Inn Airport Polo Park (a refurbished HoJo's). This year's tournament is the 15th annual Winnipeg event! Astro as an event has waxed and waned over the years; this year's Toronto even (last summer) had its usual 50 or so entrants. However, Winnipeg's event was down to just under 20 players. The fact that it was Grey Cup weekend, in Winnipeg, had to be a factor.

40K 7th edition has been around for awhile now, and two things are clear: (1) I hate the Psychic phase, which adds even more randomness and extra time to games; and (2) the newer codices are very powerful and well balanced amongst their own units, allowing multiple builds. There were four Eldar armies present (including my own Swordwind force)!

Here's a quick view of some of the other armies on display.

Wes brought out an all-Harlequin force. Beautifully painted, the army was also hard as nails. Wes deservedly won Best Overall at the tournament. 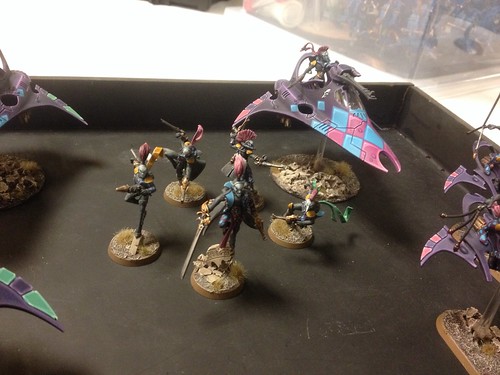 Steve brought out one of the power builds of Codex: Eldar Craftworlds. Every Windrider jetbike you see is armed with a Scatter Laser (a Range 36",  S6, Heavy 4, gatling laser). Very fast, very hard hitting. 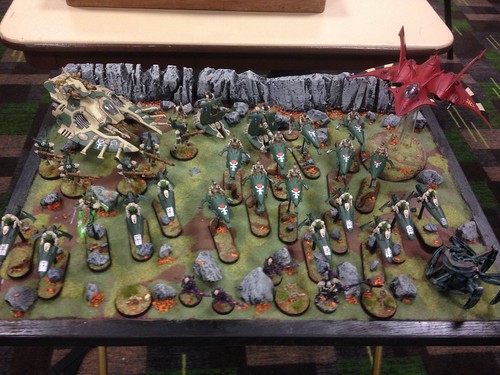 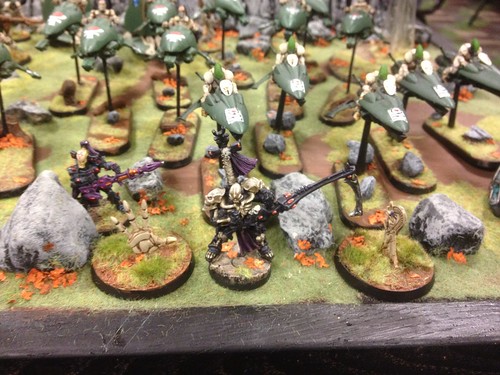 Mike brought yet another flavour of Eldar, with his Alatoic themed Ranger force. 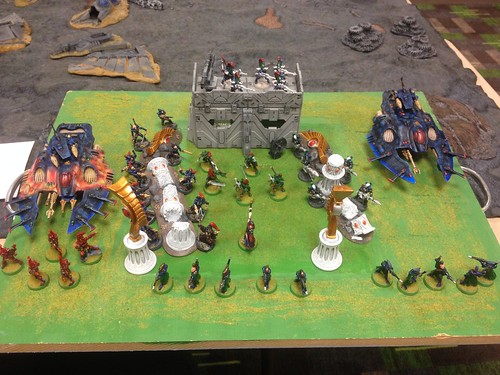 Derrick has come back with a vengeance, fielding Tau. 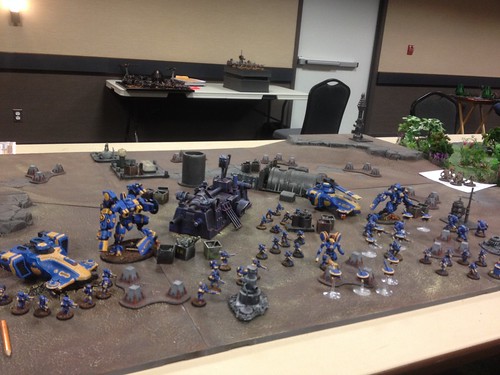 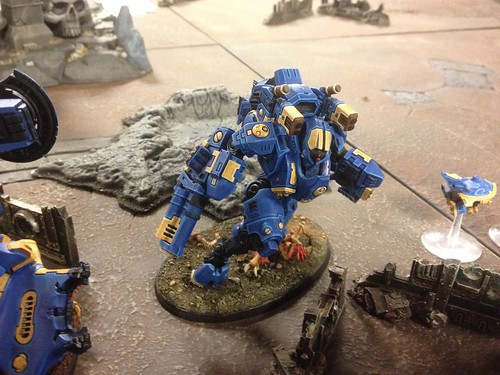 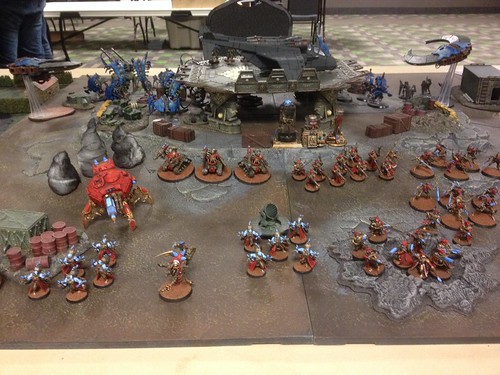 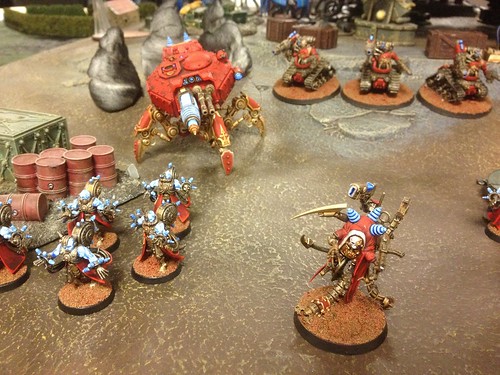 Tom brought out another hard-as-nails army. With this Necron force, Tom  was in contention for Best General. 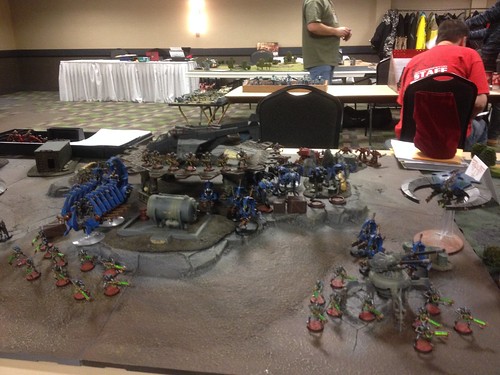 Kevin brought out an entirely new army this year. No Tiger Marines or Imperial Guard! These Tyranids are very nicely modelled. 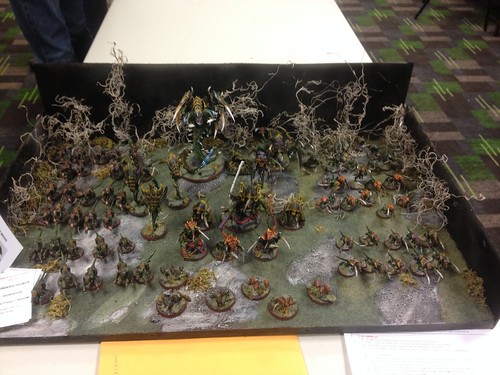 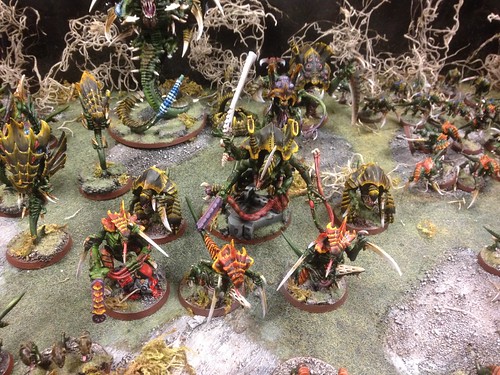 Mike fielded a balanced Chaos force. The plane and artillery are nasty, but there's a lot of low-toughness squishy bits in this force. 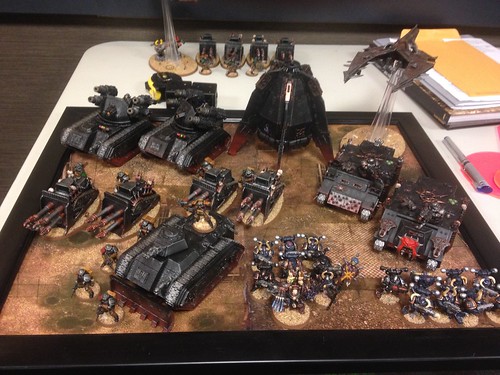 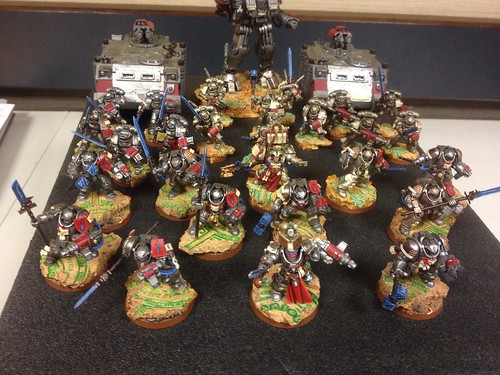 I have been playing 40K games against Lance since 1988! Some of these models date from that time period (that metal landspeeder is RT-era). The flyer is a cool conversion using parts from an IG Valkyrie. 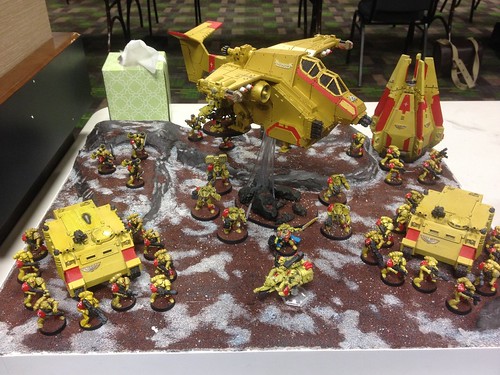 I like how it holds a (magnetized) Dreadnought to drop into combat. 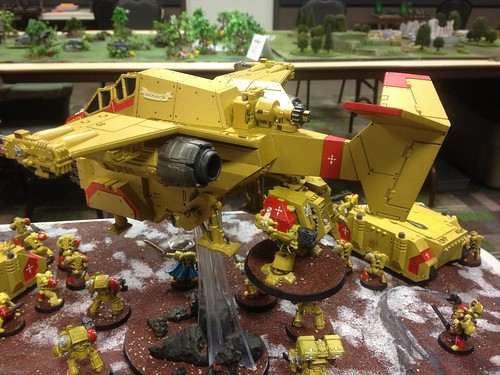 Greg brought out his Salamanders again. 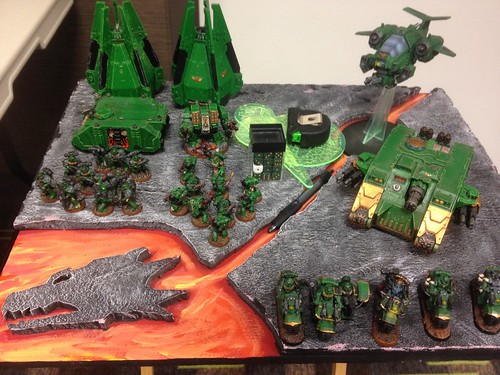 He said he's been trying to beat me for 6 years; this year he did! 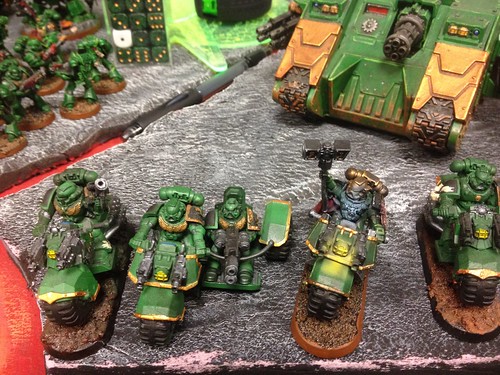 Ian brought out some Chaos-y goodness. That Contemptor Dreadnought throws out 8, Strength 8, AP 4 shots a turn! 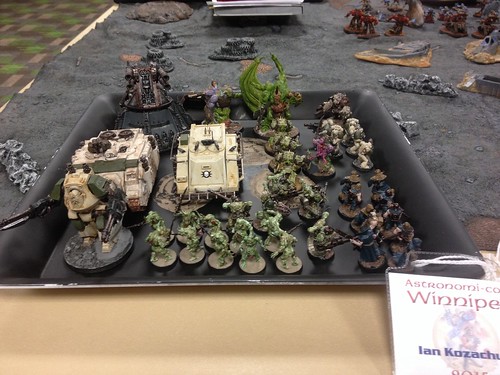 Haven't played in a long time. I wish my life was better. I tried to pin from this post and the only image it would let me pin was the Fawacett Avenue Conscript Logo. I could pin one of your Flickr photos. Pinterest is a good place to share pictures of miniatures funnily enough.

Great looking armies. Especially the Wave Serpents on the Ranger Eldar force! And nice to see some other Eldar force than a Seer council, warp spider spam that seems to dominate a lot of the tournament scene here :)

@Muskie, I am a big fan of Pinterest. What's your handle?

@Samuli S, that's what I like about the new dex; everything is good. I will be making a separate post about my own army and games. I ran with a couple of full Avenger squads in Serpents, full Banshee and Hawk squads, a couple of Hornet light tanks, Wraithguard, and a Wraithlord, all led by a Spiritseer. Managed to win the Best Painted army award!