Some weeks ago I hosted another game of Check Your 6! This time it was a fairly large game, with Luftwaffe bombers and fighters opposed by RAF Spitfires. We were playing a modified version of the Target Portland scenario from the CY6! Battle of Britain campaign book.

Below, the German BF-109 fighters were piloted by Conscripts Brian and Kevin. I ran the JU-88 bombers flying in formation. 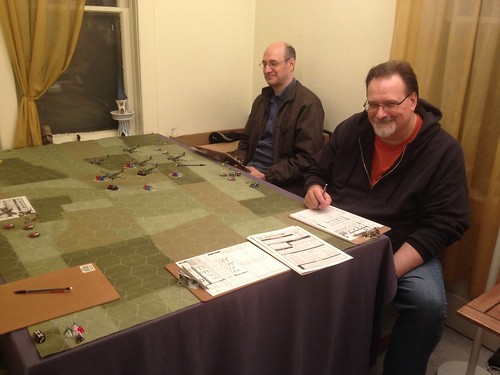 Below, a Vic of three Spitfires. 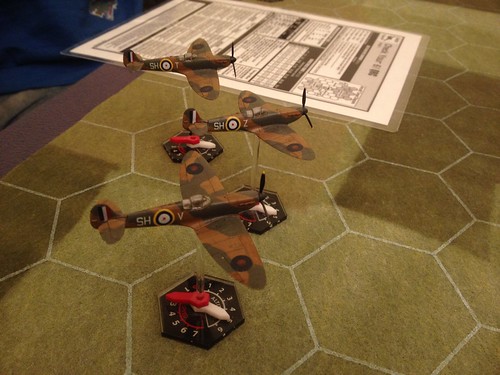 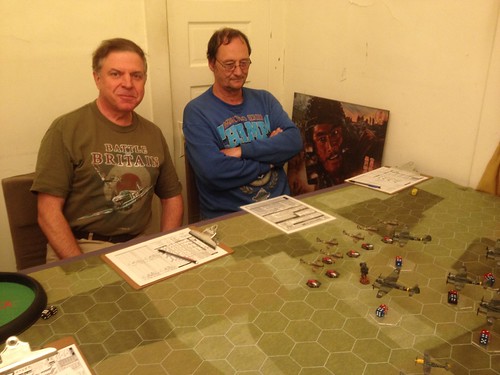 The Brits drew first blood, erasing the German squadron leader in a hail of bullets. Frederick's wingman did enough damage by himself to auto-kill the bomber! The crew parachuted into captivity. 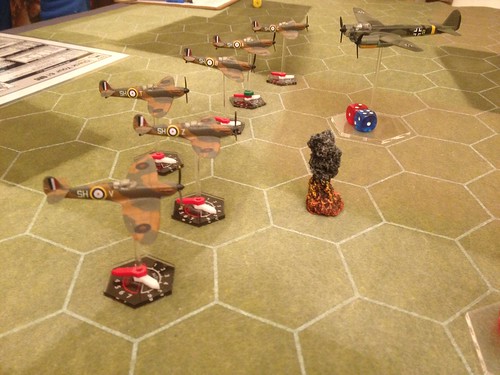 Both sides traded fighters as a Spitfire and Bf-109 went down, and a German bomber takes an engine hit. The Spitfire pilot bailed out OK; he was probably back in the cockpit the next day. The German fighter pilot did not fare so well, being killed as he tried to hit the chute. To the right of the frame, Duncan's ME-110 Zerstroyer fighters have shown up to party. 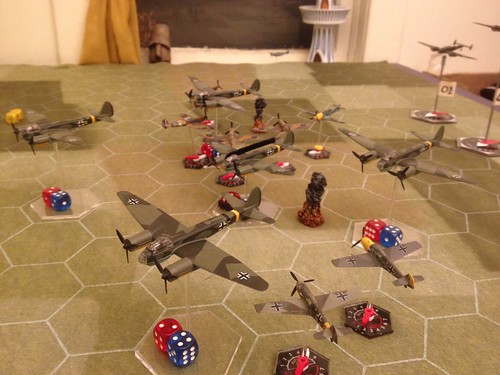 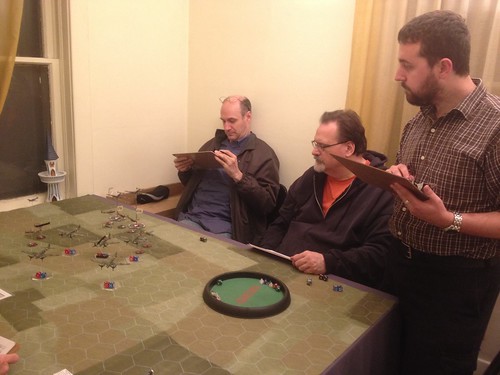 The stricken bomber slowly drops out of formation. 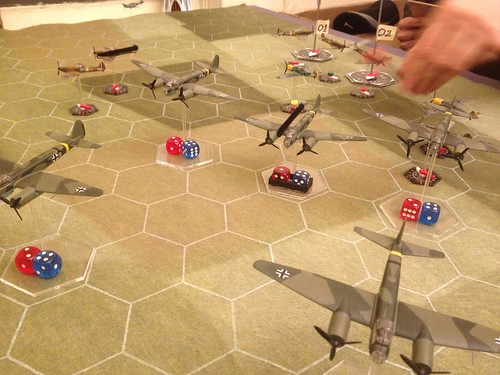 The ME-110's and a couple of Bf-109's tie up the majority of the remaining defenders. 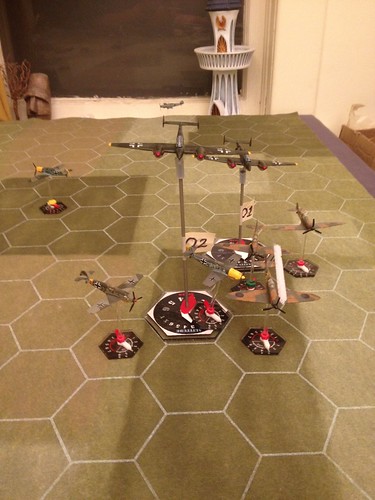 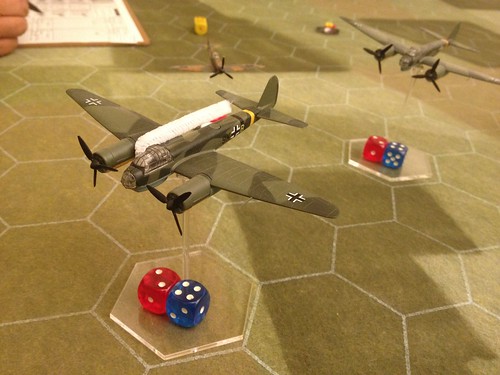 A Spitfire with airframe damage tried a tricky manoeuvre... 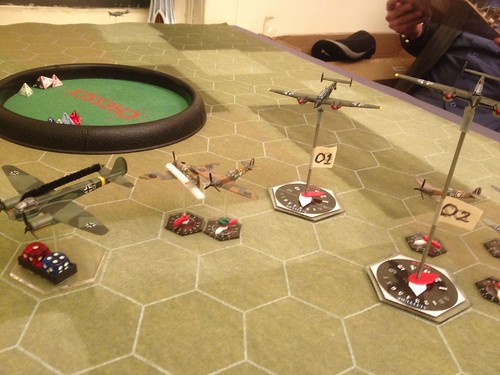 ...but pulled its own wings off in the process! The Spitfire closest to the camera was set on fire by cannon fore from the German heavy fighters. 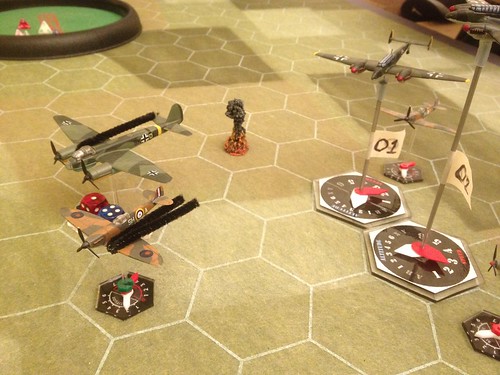 As another Spitfire drew a bead on a bomber, an escorting ME-110 executed a mid-air ram! 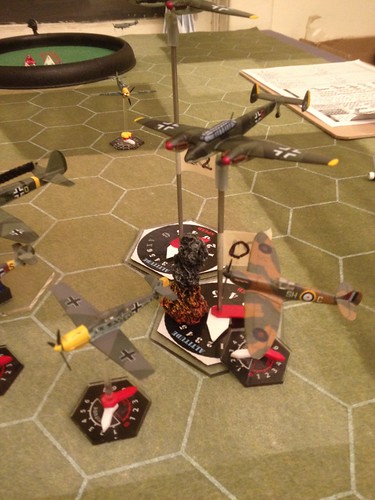 Both planes received engine damage and spun out of the fight. Meanwhile, fighters who had run out of ammo headed back to their respective board edges. 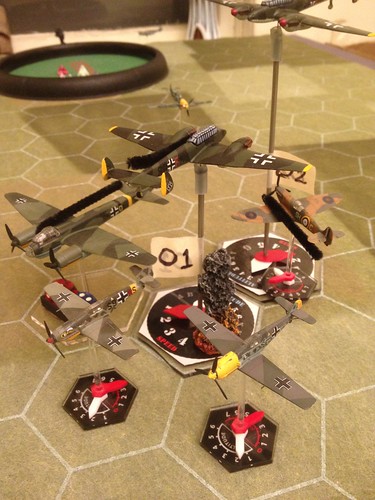 Most of the bombers managed to survive the gauntlet, dropping their bombs on Portland! 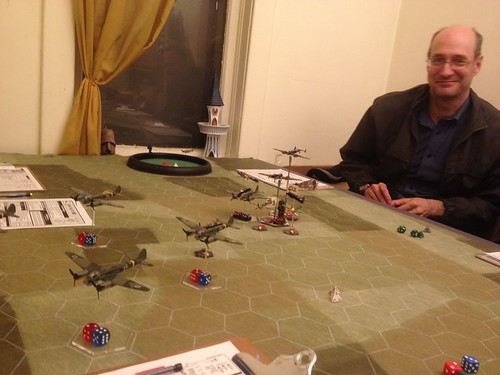 We don't play enough Check Your 6! It's fast to learn; both Malcolm and Duncan were new to the game, and picked up its basics within a couple of turns.
Posted by DaveV at 1:13 PM

Wow, looks very cool with the big planes (well, big for this sort of thing).

How easy to play do you find Check your 6! to be? Could it be picked up by more casual gamers?

Yes indeed. Kevin and I took CY6! to a recent tabletop game convention, Jim-Con 5. Spent maybe 6 hours running an introductory scenario and just introducing the game to people who wandered by. You can pick up the basics of energy, altitude, and movement in a couple of turns.