Sedition Wars - Re-fight and Some Thoughts

Conscript Byron was sick a couple of weeks ago so couldn't come out to the Terminal Station game I ran. Accordingly, he dropped by Wednesday night to re-fight the game. This time it was just the two of us, head to head, with Byron running the Vanguard, and myself running the Strain.

The scenario objectives were the same as we previously played - basically it was a race to the train. However, both sides played a little differently,  both acting more aggressively.

Byron set up his 7 Vanguard (6 armed with laser carbines, one elite armed with a grenade launcher) as far forward as he could, in two groups on either side of the sushi restaurant. The grenadier was given two tactics markers, to allow her to fire indirectly. 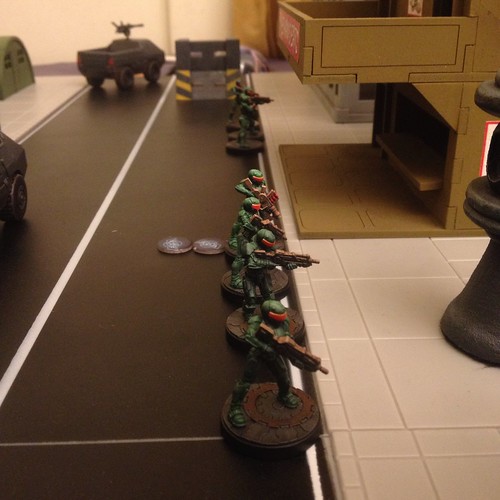 The Strain (16 Revenants, 2 Quasimodos, and 2 Stalkers) were again limited to setting up adjacent to 4 strategic points. (Remember, we have doubled the gun ranges to S=8/M=16/L=24 inches, so the point cost of the Revenants has basically been halved). 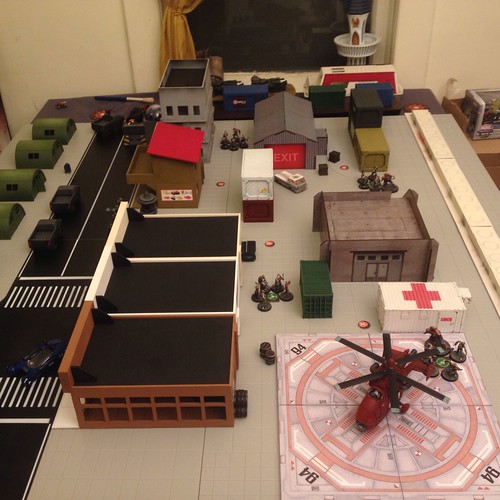 Byron opened the engagement with the launching of his only grav grenade, causing some damage, but, more importantly, pinning several Strain in place for a turn (the Singularity effect reduced their movement to "1"). 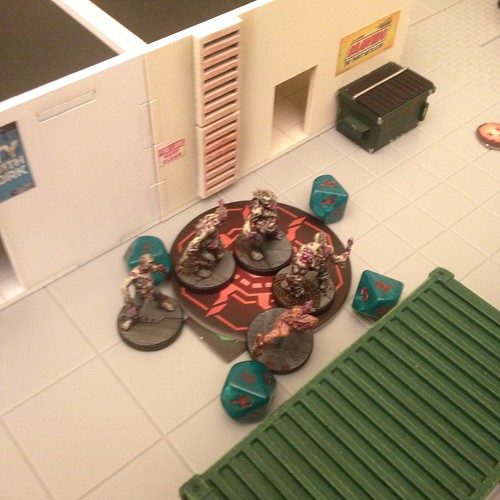 The Vanguard advanced north towards the rail line, on both sides of the red-roofed sushi restaurant. Nine Revenants and a Stalker advanced south towards the Vanguard, some entering the strip mall buildings through the back doors. They drew a lot of fire, and most of them were killed, However, the nano-virus clouds left behind by dead Revenants moved on, infecting some of the Vanguard. The two Quasimodos moved to take up firing positions. The rest of the Strain moved away from the action, towards where the train would arrive. 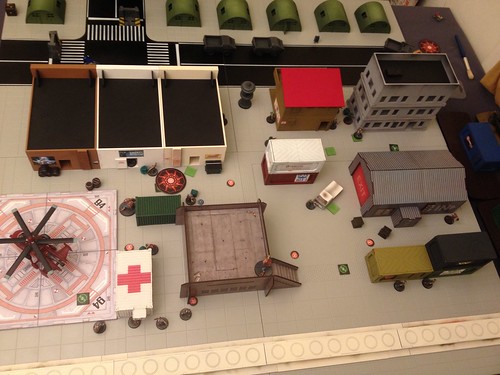 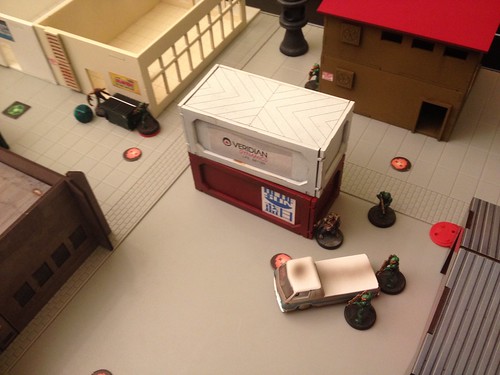 A single Vanguard Samaritan got the attention of both a Quasimodo and a Stalker, but for a couple of turns none of them could manage to hit the other, even with the assistance of the Tac-net! 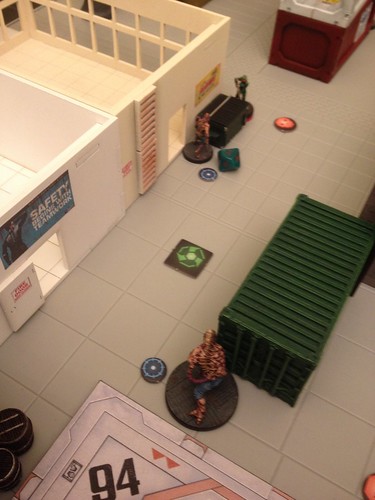 One of the Quasimodos achieved a strong position on top of the blockhouse, commanding the centre of the table. He killed a Samaritan with his acidic ranged weapon. An infected Samaritan drew his fire, and blew him away with a well-aimed laser shot. Then, as the infection overtook her... 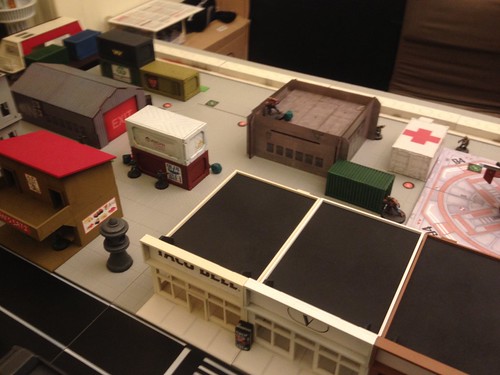 ...she withdrew towards the western table edge, trying to get as far away from her comrades as possible before the inevitable happened... 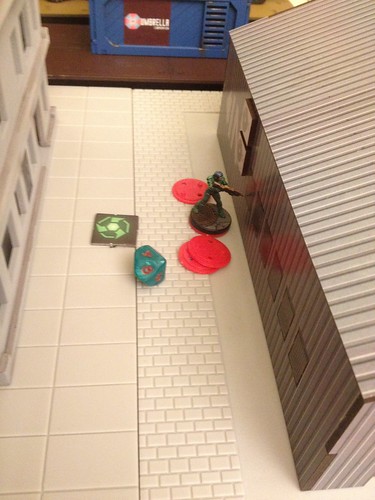 ...and the nano-virus consumed her and turned her into another Quasimodo! 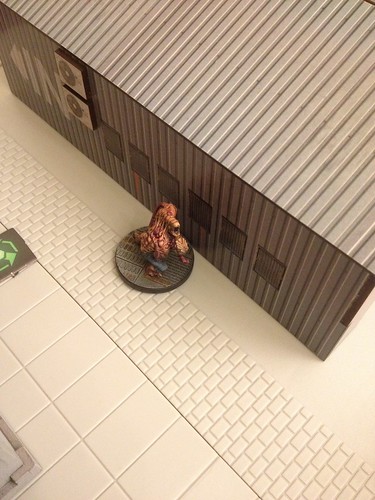 When the maglev train arrived, 7 or 8 various Strain were in position to board. A couple hiding behind a Tyrell Corporation shipping container were lit up by the grenadier (literally; she set them on fire). Akosha Nama, riding on top of a container on a flatbed car, finished off the flamed Stalker with a round from her sniper rifle. 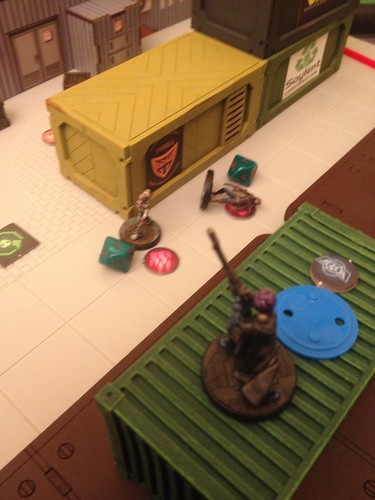 Below, Byron contemplates his potential moves toward the train. A couple of Vanguard have already been hit by the remaining two Quasimodos, and are about to die agonizing deaths from their corrosive acid spray. 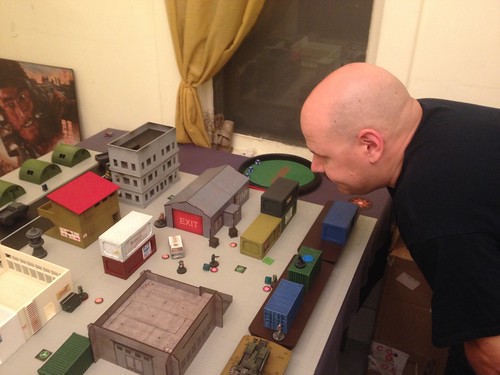 The single Vanguard Samaritan left behind by the Taco Bell finally helped kill the Stalker threatening her, then she moved away from the train, drawing fire from the recently-created Quasimodo. Though covered in acid, she managed to kill the creature (her former mess mate) with a single shot (she rolled three "6's" to hit). 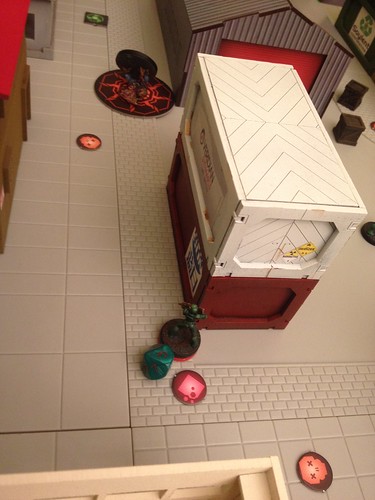 The Grenadier and another Samaritan managed to join the sniper on the train. Meanwhile, six Strain also boarded the train. However, two Revenants died from Vanguard reflex fire and one was reduced to a single wound. The two Samaritans were infected by the resulting nano, but otherwise were unwounded. 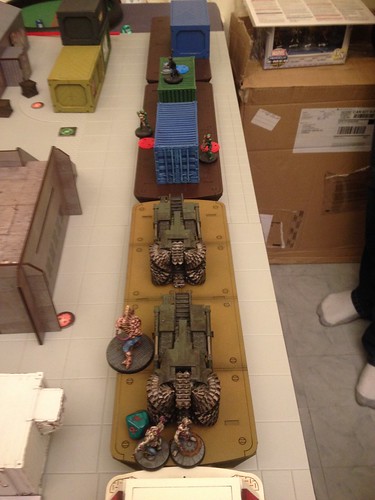 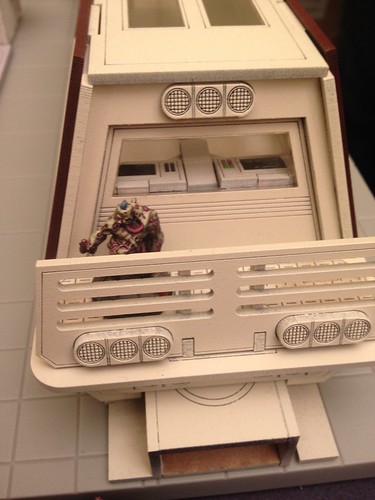 Discussing the game afterward, in our minds we took it as a tie. Yes, the Strain got 1 more model on the train, but it had only 1 wound, and the Vanguard had a big, expensive character with a superior, longer-ranged weapon.

I like the alternating Active Mode and Reflex Mode that comprise each side's turns. You always have to pay attention, since, in Reflex Mode, your models may be able to respond to enemy actions.

Trooper Vasquez managed to avoid the worst effects of the acid on her armour. As the train left Terminal Station, she ruefully turned away and contemplated her situation: Wounded. Infected with the Strain nano-virus. Alone in hostile territory.

"Time to soldier, soldier," she said to herself. "Let's see if that abandoned aid station has anything that can slow down this frakking infection." 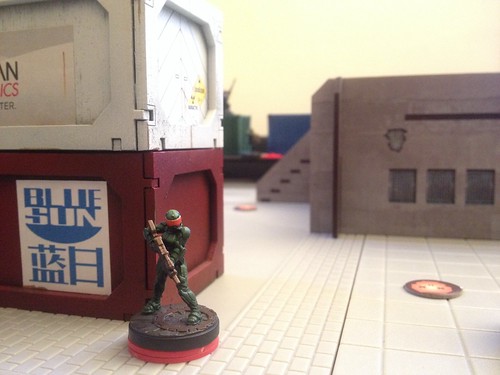 Operator Akosha Nama called out to the Vanguard nearby, "Get back! There's a Corpsman at the other tender that can help you!" 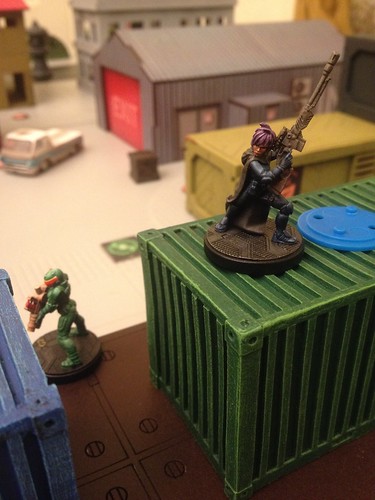 Her optical camouflage activated. She started to disappear from their view, and looked straight at her enemy. 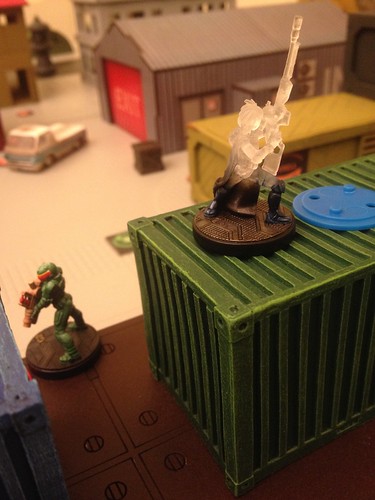 Ha-ha, I love the narrative then picture of the disappearing akosha.

What do you think of the game overall? Mine is still in the box. The resin and metal models are lovely but the restic mold lines really put me off.

I love game itself.

It's a skirmish level game complex enough to incorporate reflex (response or overwatch) actions and some different sci-fi weapon types. The Tactics mechanic simulates the capabilities of networked communications, command, and control better than other sci-fi games I've played. It's still simple enough for us to play with our almost beer and pretzels style of game nights. (For example, the mechanics of Infinity are unsuitable for situations where 2 to 4 people may want to play on each side.) Our games have been very close. The actions of single figures have been often heroic and pivotal to the game's outcome, giving a very cinematic feel to those affairs.

The two sides are very asymmetric. The Vanguard have to use their Tac-net tactics pool carefully to best use their skills and resources . The Strain and the nano-virus together play like one big creature.

The second edition of the rules is better; a great summary is available here:
http://www.orderofgamers.com/games/sedition-wars-battle-for-alabaster/

The game seems balanced for the board game. However, I dislike the look of fully painted figures on 2-dimensional boards (it's the reason I haven't really gotten into Zombicide, which is otherwise a fun game.) For tabletop play with lots of terrain we double the range of gunfire, and double the number of 1st and 2nd level Strain.

The restic models are indeed fiddly. (If Studio McVey would only re-stock them, I would buy more resin Vanguard in a heartbeat.) I think the restic figures are what keeps more people from actually getting into the game. Not just the mould lines either. I've pinned all the Vanguard wrists to arms, and all the figures have at least one pin holding them to their bases. For non-modelers considering picking up what looks like a cool board game, the prospect is maybe too daunting. (At least with the new The Others: 7 Sins board game from CMoN and Studio McVey, the figs come pre-assembled: https://www.kickstarter.com/projects/coolminiornot/the-others-7-sins)

That being said, the only non-restic model featured in my recent SW batreps is the helmeted grenadier. I have assembled and painted almost the entire contents of the basic box, plus a few extra Opticamo Vanguard and extra restic Revenants I picked up online (some 52 figs so far).

Files don't work on restic, they gouge the figs. With a good supply of sharp No.11 X-acto blades, over time I got the cleanup and pinning of the restic figures down to around 45 minutes a model. You have to cut off most of the mould lines, but I found that, with a fairly fresh blade, you can carefully scrape smooth some surfaces like the Samaritan helmets/visors by holding the blade edge at an 80-90 angle to the surface.

Thanks for such a detailed reply! I may give the game a try again. I have some friends who like board games so I thought it might bridge the gap between board games and miniatures games. That assembly sounds like a nightmare!

Good AAR, Dave! I think the game play really benefits from you and Byron both being pretty familiar with the system now. Smart move by Byron too, to set up as far forward as possible - might as well gain as much ground as possible BEFORE the game starts!