The Martian Front is progressing... 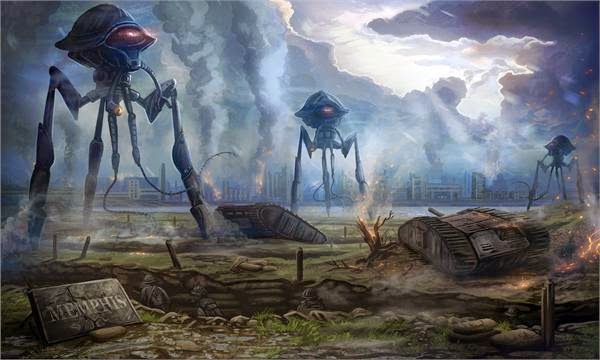 A long while ago I saw a Kickstarter (sorry to use a swear word, at least in Greg's opinion) for a game that really caught my eye.  The idea of the whole game and setting is based on one of my favourite books, even though neither movie made was all that great.  The game is called "All Quiet on the Martian Front" (AQotMF) and based on H.G.Wells book "War of the Worlds".

The theory of the game is that the first invasion took place and then the Martians died out, but now 10 years later they have come back with a vengeance.  In that time frame though Earth has prepared.  We now have some weapons based on the Martian technology left behind, and have developed huge steam powered tanks and guns.  The look is steam punk / WW1 / WW2.  While it takes place in 1910 some of the weapons and guns would normally have been almost WW2 level, but due to the advances made after the first invasion the Earth is further ahead in the timeline.

While I got into the Kickstarter because of the figures and being too cool / goofy to pass up (or Cute in the wife's words) and thought that no matter what the rule set was like since the figures were 15mm(ish) I could use them for any rule set we liked.

However as a pleasant surprise the rules supplied are actually really well done!  The rules are written by a few ex-GW employees namely Priestley, Cavatore, and Baker, which makes it maybe a bit more surprising since the current GW rules are not all that great (maybe because these guys left?).  While the rules are not hugely complicated or in-depth, they are excellent in their simplicity and allow a game to play really quickly and "feel" right, meaning it feels like I think it should fighting the Martian tripods.

Now that I have two 1000 point forces painted, I will be getting the figures out for a game soon with the Fawcett crew.  Here are the rest of the images of the stuff I have painted so far, and a few pictures of a game that I played with my son to show how quickly things can go wrong...

The game is based on a D10 system, almost everything Human dies in 1 shot if in the open, and the game has a move-shoot-move mechanic. The move-shoot-move allows you to pull out from cover, fire, and get back in cover before being shot at, which is critical for the humans.  It also allows the Tripods to advance at a blinding speed though, as the Assault Tripods have a 8" move and the Scouts have a 10" move. Meaning they can cover 16" or 20" respectively in a turn!

In a test game I played with my son last night he advanced the Martians against the town sweeping all the way around onto my side of the table.

To react I spent several command points to bring 2 previously destroyed units of tanks back into play and launched an attack against the tripods trying to pull them away from the town.  However, the tripods are tough as nails and I only managed to damage 1 of them.  The next turn, the Martians turned around and...


Anyway, there are the images for the new game and models, and while I may get flack from some gamers due to the cartoony nature of the tripods and the over the top steam punk nature of the tanks, I really like them :-)

Best of all, the game play so far is a lot of fast and furious fun.

I can not wait until wave 2 gets here, at which point I will have even bigger Tripods and tanks, as well as some of the really bizarre / goofy weapons like Tesla guns, Land Ironclads,  clamper tanks, mono-wheels, and more!

Oh, and I am sorry to report, that I lost the game by 1 unit to Riley...  He is of course now grounded for the rest of the summer.

Email ThisBlogThis!Share to TwitterShare to FacebookShare to Pinterest
Labels: 15mm, All Quiet on the Martian Front, AQotMF, WW1

Everything looks great, Byron! I look forward to trying out the game! I wonder if they'll come out with a 1950's style variant at some point? Probably wouldn't be too difficult to bodge up some "Godzilla vs Tokyo" rules either!

50's? Oh, you mean the hovering manta ray movie versions? If so, no, that's not from the book, although they are doing tiny hover drones as a homage to that.

Their future expansions include the Venutians and the Underdwellars as well as other nations.

And yes, actually bodging rules for other monsters would actually work really well with this game set. The rules for the Martians translate to any big monster really well!

Essentially everything has an armour value, Tripods are 11. So once something hits, they then roll weapon power (tank guns are +2 in most cases) and have to meet or beat the armour. Since it is D10 that means rolling a 9+. If you do, then Tripods have a damage table, but most results 1-7 only take off 1 armour (making them easier to hurt the next time you hit). It means you need to pour shot after shot into them to kill them, while human tanks dont have a damage table. Martian guns get +2 on a sweep (think flamer) and tank armour is 8, meaning once hit (and the template can hit 2-3 tanks) a 5+ per tank, and POP!

I can easily see this working for Godzilla or King Kong or anything!

Looks like a fun time was had, which is always most important. My buddy & I are still working at getting our 1000 points painted up, well rather I am still painting the human force, his few tripods already exceeded the allotment.