All Quiet on the Martian Front - First Club Game

Last week we played out first game (hopefully of many) of All Quiet on the Martian Front. The game was a small(ish) game that was based on the Bunker scenario from the main rule book.  There were three bunkers and trench systems in front of a small town that the Martians were trying to overrun and that the Human forces had to defend.

The Martians had to setup along the table edge, while the human forces were allowed to deploy completely hidden. 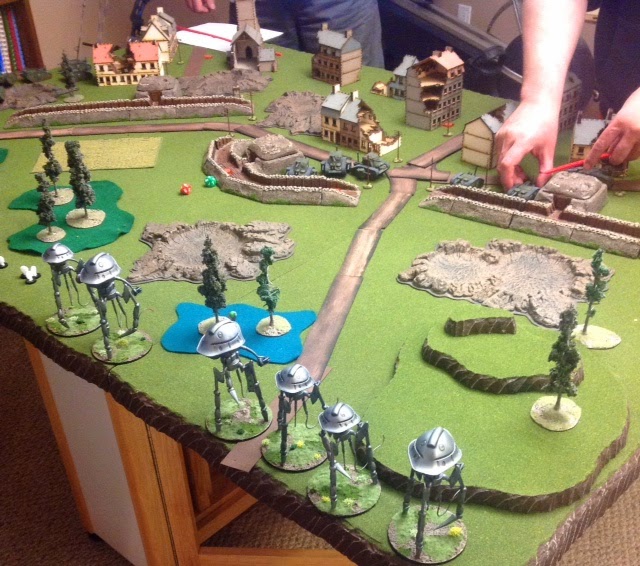 Players rolled off and the Humans got the first move.  They responded by revealing their tanks and moving up to fire.  They were able to get several hits from the two units of Mark III's that had deployed in the right hand side of the town.  They scored a critical hit on a scout tripod and took off 5 armour in a single hit, which would make it very vulnerable later on.  They also scored a hit on an assault tripod and took of a single point of armour. 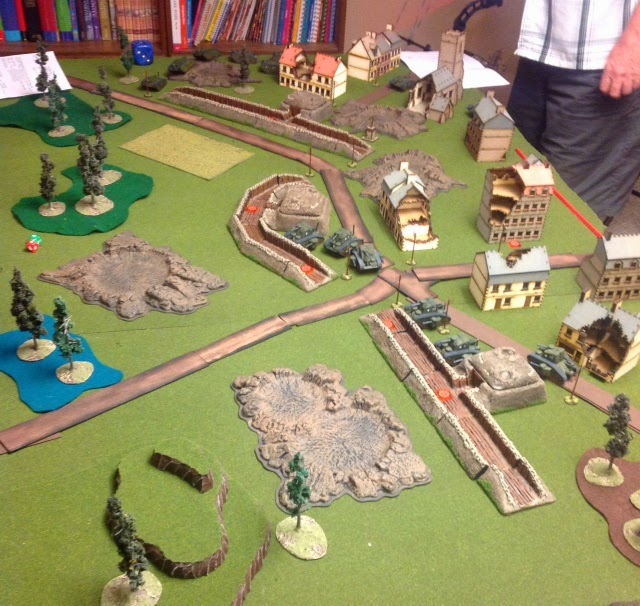 In response to the fire, the Martians moved up, using a command point to double move the assault tripod with the green gas grenades into range.  The injured scout tripod took some shelter in the woods to try and prevent being an easy target. 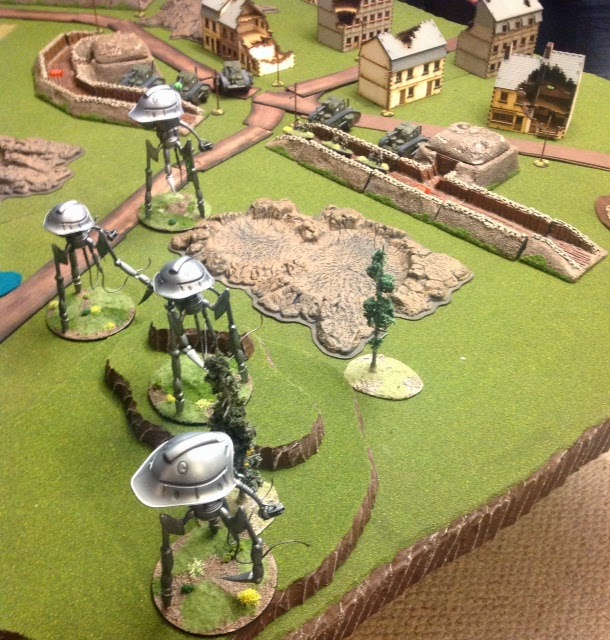 One of the distant tripods targeted the hidden counter in the trench to reveal a machine gun squad, and then the green gas equipped tripod opened up with his heat ray and gas grenades onto the Mark III tanks behind them, but thanks to AOE also tagged them.  Thanks to so really bad luck on the Martian rolls, the humans only lost one tank. 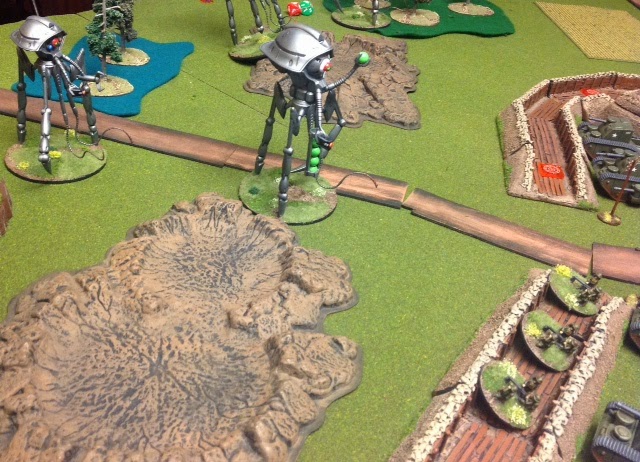 The Humans did their best to hold the line, but only 1 turn later all 6 Mark III tanks were gone, with only light damage against the advancing tripods. 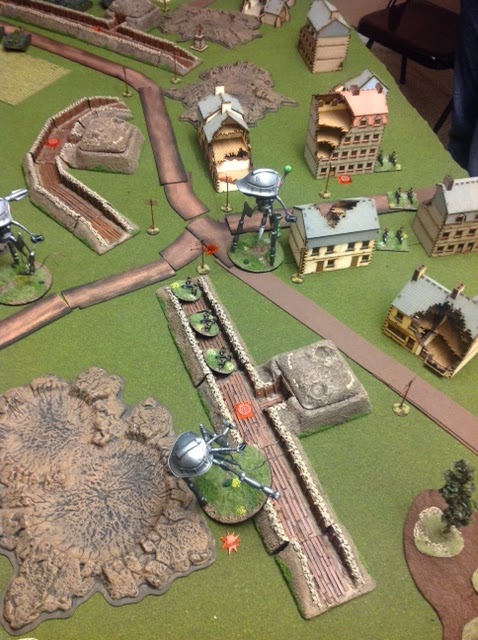 The Human forces had tried to balance the table, having had to setup first, therefore a good portion of their tanks were on the far left and out of the action for several turns.  Below the left front sees the advance of several squads of Mark II's trying to come to the aid of their allies on the other side of the table. 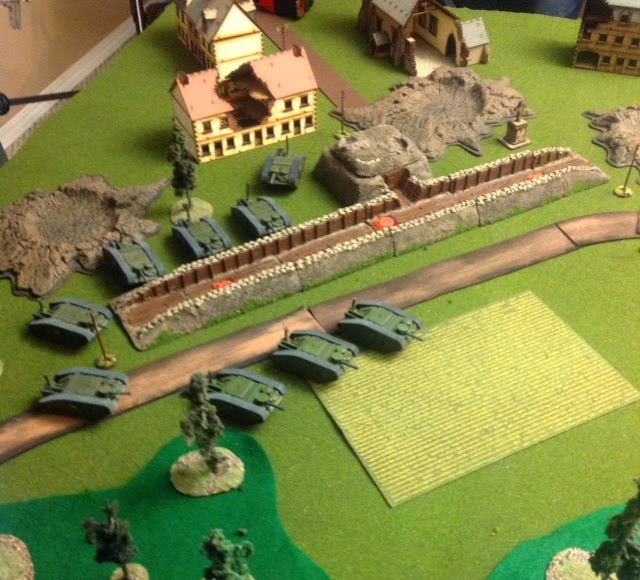 The right half of the table was not going well, as a scout marched down one trench negating the cover that the machine gun team had and wiping them out.  The black dust launcher went to work on the center trench.  The only good news for the Humans was that on turn 3 and 4 they managed to get a whopping 5 immobilized counters on the green gas equipped assault tripod!  These all came from the bikes madly circling it with grappling hooks and effectively hog tying it. 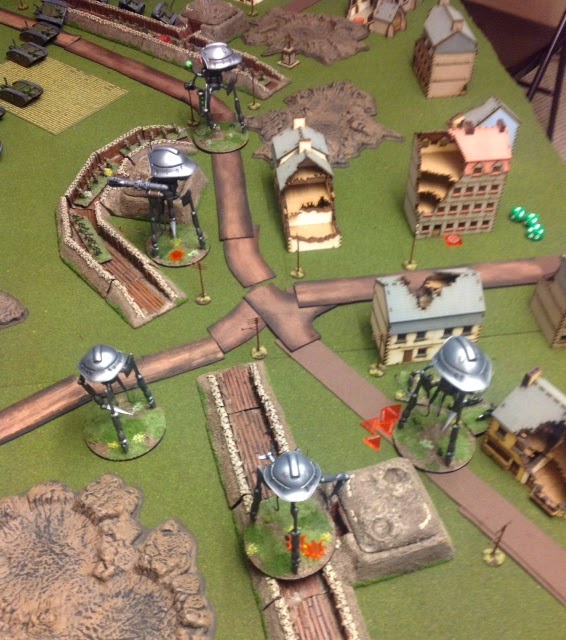 The immobilized tripod made a great target for the 2 units of Mark III's that the humans spent command points to return to the table as reinforcements on turn 3 and 4.  Turn 4 they opened up on it missing on only 1's due to all the immobilized counters and threw a natural 10 on the damage table to blow it sky high!  The explosion also inflicted some more damage on the nearby scout tripod, but not enough to down it.  Unfortunately, the explosion also took out all the brave rough riders that had made the shot possible. 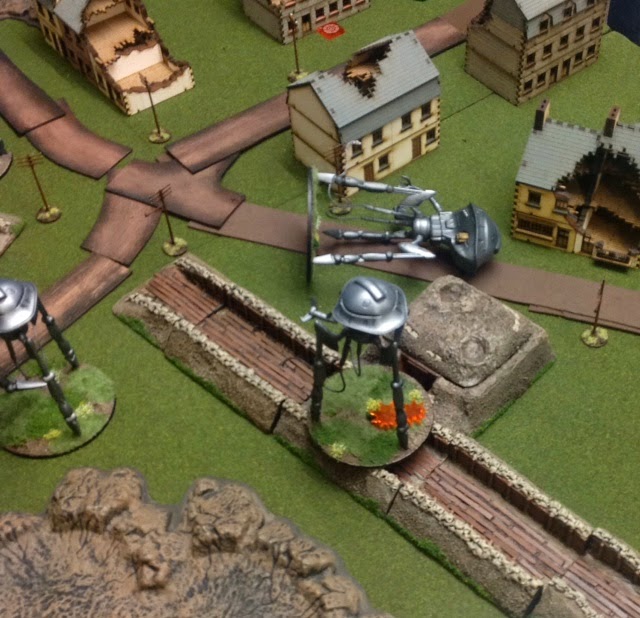 The next few turns involved the Martians and Humans trading shots along the left hand side of the town as they both tried to get the other the the breaking point.  In turn 5 the Martians needed to kill 2 more human units to break them but failed to do so.  In turn 5 and 6 the Humans won the initiative and only needed to drop a third tripod to win, but were obviously shaken from the explosion earlier and could not hit them.  In the bottom of turn 6 the Martians inflicted casualties on a Mark II tank unit and an infantry unit, both of which failed their moral tests and fled from the table, ending the game. 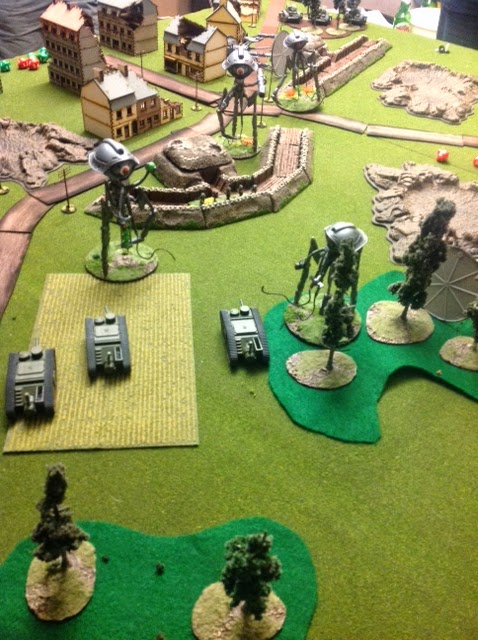 Yet another game of AQotMF that went down to either side being able win in the last turn.  Pretty much every game I have played has come down to 1 kill either way deciding the game, which to me makes for a really exciting game.

While the Martians won the day, only 2 escaped undamaged, and if the humans had been able to roll at least average on any number of occasions they could have won.

The game played out pretty well as the Humans have huge number advantages, as well as the ability to bring back forces, while the Martians see to shrug off huge numbers of hits before cracks finally appearing in their armour.

I hope everyone had a good time with the rules and that we can get more games in soon!  Especially once some of the more specialized vehicles and tripods show up from the wave 2 shipment.

Email ThisBlogThis!Share to TwitterShare to FacebookShare to Pinterest
Labels: 15mm, All Quiet on the Martian Front, WW1

Which is a shame really, because I'm trying *so* hard not to buy this game!

Nice report! I had been interested in the KS, but decided not to pledge. Still not sure if I shall regret it or not, since this is not really my scale or setting, but reports like these push me a bit more towards regret! ;-)

@Dhcwargamesblog - I was on the fence initially too as the price seemed really high initially given the scale. After a lot of people talked with them (and they listened!) the price got better with add ons, and the shear size got better explained (yeah its 15mm, but the tripods are pretty much 6" tall).

To top it off (despite a few editing errors) the rules are really good, fun to play, and really set the right flavour for a game where it's us puny humans vs gigantic martian war machines. I couldn't suggest it strongly enough now that I've played a few games. I rank it right up there with Chain of Command and Through the Mud and the Blood as one of my favourite games right now.

Great stuff, glad to see it playing out well, I have my own outing in a few weeks.
Cheers
Stu