Last weekend fellow Conscripts Byron, Kevin and I played another game of table top Sedition Wars. This was also the first time I got to play with my painted Vanguard. I have not finished my Strain, so Byron provided his for our use.

The table was set up by Byron, who used a table topper sheet from Relic Knights, and buildings from Micro Art Studio.

We played a variation of the first "Outbreak Campaign" scenario - Breach. In the first photo below, we illustrate the starting positions of forces, corpses, and objectives. Anything seen on a building roof is actually located INSIDE the building on the first floor (this photo was taken after the game was over, when we re-set everything). The buildings had removable stories and roofs, so we could fight inside them, too. The posters and such seen on the buildings Byron downloaded from the internet. 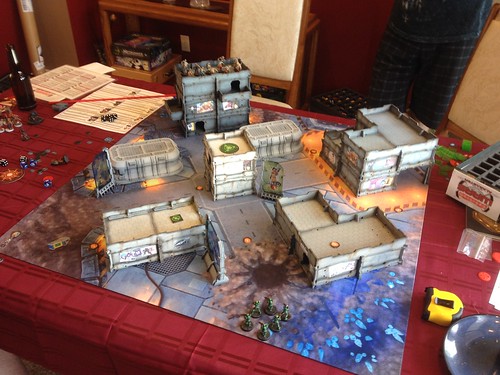 Strain Objective: Convert all the corpse counters into Strain Revenants.

Changes from the basic game: Ranges were doubled out to 8 /16 /24 inches from 4/8/12 inches. We ruled it cost 3 inches move to go up or down one story. The first stage necroforms were made cheaper, down to 1.5 points each, instead of 3.

IIRC, Kevin and I ran the Vanguard, starting with 6 basic Samaritans, and Byron ran the Strain, fielding 10 Revenants, 2 Stalkers, and a Quasimodo. 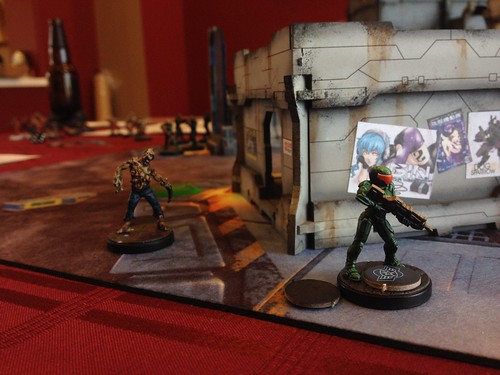 The unfortunate Vanguard Samaritans below have both been hit by acid, and the farther one infected by clouds of nano virus. They were both gone by the next turn. 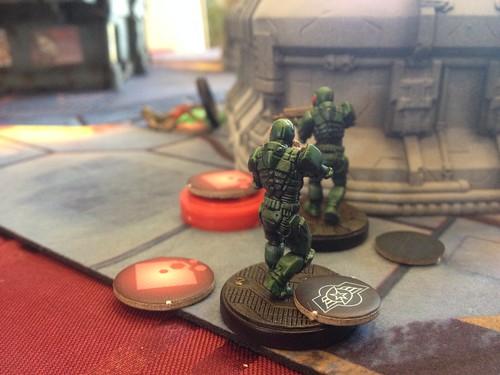 Though impaled by a Stalker, the Samaritan in the photo below shot him down, then her Prophet armoured suit managed to seal the bleeding and kept her in the fight. 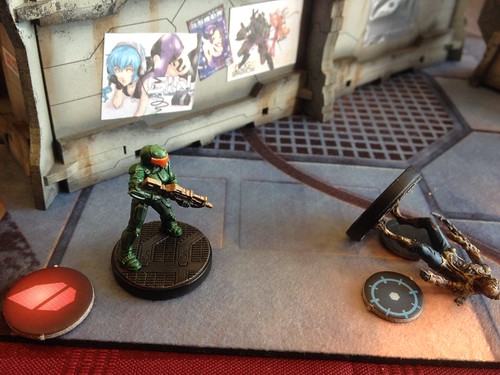 During the course of the game, the Vanguard gunned down around 17 Strain models (good thing they could create more, both from activated corpses, and a Necrocyst in the northeast bulding), for the loss of 4 troopers. It was a very tactical game, with cool cinematic events like a Samaritan drawing the fire of a Qusimodo on a balcony, her sacrifice allowing another Samaritan to rush into the building with the objective.

In the photo below, that Samaritan reached the Life-Support Terminal, but couldn't activate it before the Strain converted the final corpse into a Revenant. 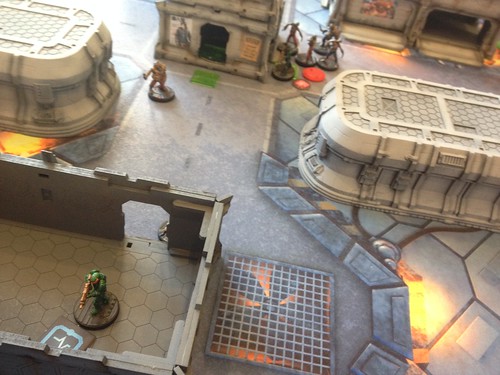 
"It was an awesome, tense game. I am constantly amazed at how every game we ever play of Sedition Wars comes down to a last turn win for either side. This game was a Strain win, but if I hadn't won that turn the next turn the Vanguard would have won."

I am busy working on both my Strain and lots of terrain for my own table. Lots of MDF buildings and cargo containers, Quonset huts, resin vehicles, and a mag-lev train will provide plenty of scope for future SW scenarios.
Posted by DaveV at 4:35 PM

Great looking game Dave - and your stuff looks excellent out on the table!