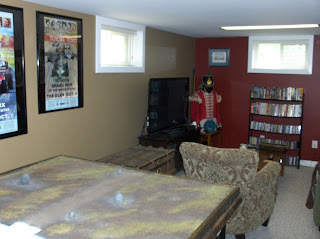 Well, it did take awhile but we're now pretty much settled into our new house, and more importantly, the basement gaming area is ready. So to celebrate this I hosted an old-school 40K "Rogue Trader" game last week. 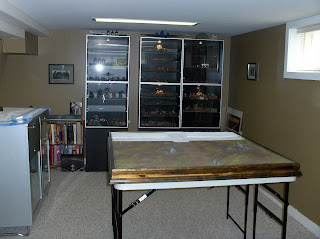 The cabinets are IKEA "Besta" with glass doors and shelves, and added interior LED lighting. IKEA is great but every component is offered "a la carte" which means costs can quickly escalate. Fortunately I don't picture us moving again anytime soon so there should be a long amortization ;-) 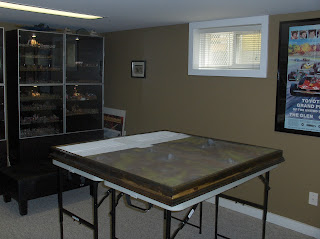 The game table base is made up of 4x2 foot folding tables picked up on sale at Canadian Tire. Very sturdy and a perfect base for the very weighty terrain board that goes on top. 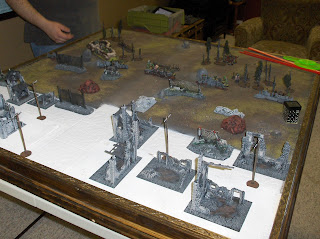 Anyway, on to the game! Greg had very kindly come up with a scenario to continue our "Rynn's World" campaign pitting my RT Orks against his Guardsmen and Crimson Fist Space Marines. In this game, taking place on the outskirts of New Rynn City, an Ork blocking force is buying time for the rest of the horde to arrive. The Orks occupy the defensive line seen about 1/3 of the way from the top of the table. There are three objective markers spread along the line; the forces of the Imperium start in the city sector and have 10 turns to take the objectives. 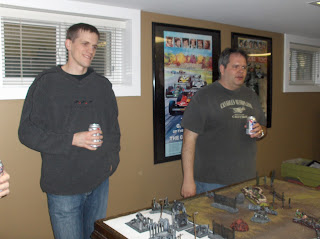 Conscripts Mike F. ready to roll with the forces of the Imperium. Greg ran the game. Kevin and Dave V. assisted with the Imperial forces, which comprised: 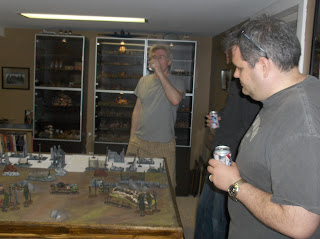 Conscript Wes, centre with beer, acted in an advisory capacity to the Ork side, which consisted of:

Byron made it out to the game as well which was cool. 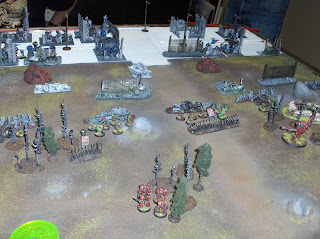 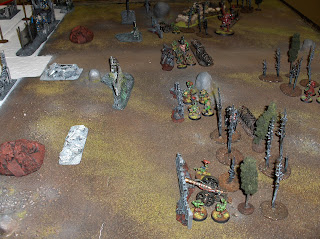 A view from the western edge of the table. Red Barun executing a precision airstrike (!) on the Guard HQ squad in the ruined building at top centre. 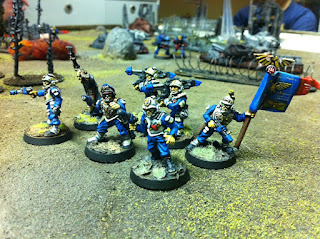 Here's a pic of that Guard HQ squad, in happier times... they ended up routing out of the building after soaking up mucho bolter and lascannon from the boyz opposite them. Mike left shortly after that... (he said he had to work early. Uh-huh...) 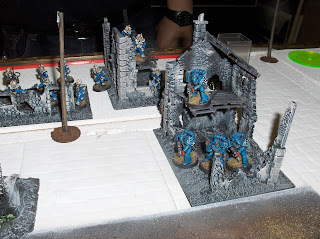 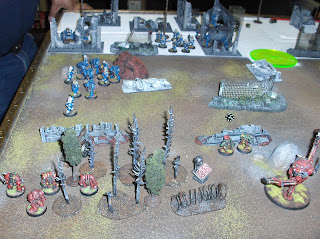 The main Imperial thrust came on the Ork left. I've moved the HQ squad and Kan to cover but as you can see, Imperial shooting has already whittled away the Boyz squad. Some uncharacteristically accurate Ork shooting peeled away most of the Guardsmen supporting the Marines, too. 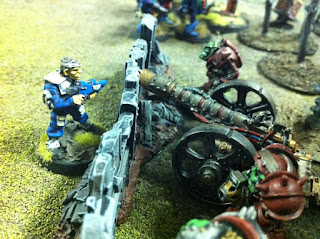 Also, this guy (at left) died. held an objective all by himself, making an invaluable contribution to Imperial victory. (original text must have been wishful thinking on my part - thanks to Dave V. for the reality check) 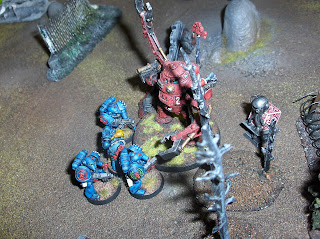 This is where the Kan should have shredded some Space Marines... 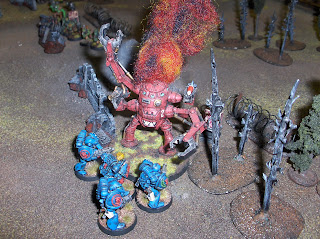 ...sadly it fell in the first round of combat without even striking a blow. Waaah. The Ork HQ also withered under the savage Marine assault. Fortunately Ork shooting killed or routed all of the Guardsmen and some of the Marines too. The question was, would the Imperials have enough models left on their side to have at least one on each objective by turn 10? (Yes, the game was that bloody :-) 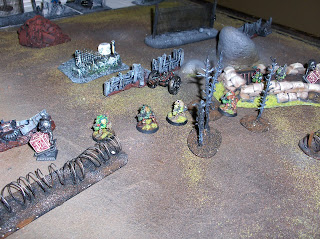 The remaining Orks form a conga line out of the bunker to try and safeguard one more objective, but to no avail. 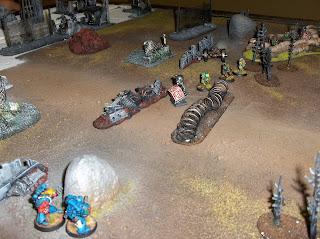 The Marines were just too tough tonight, even with Toughness 3 they pwned. The Orks acquitted themselves well though; the Barun accounted for several targets and there was one turn where I literally rolled six "6"s in a row with the Ork heavy bolter. We routed the Guard HQ squad handily as well. Gotta take those Thorpeian "moral victories" where you can. 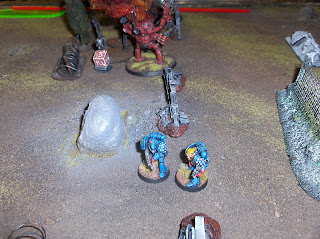 Well, it was a hard fought game and yet another very cool Rogue Trader battle is in the books. I'm really happy with the new gaming space and glad that the boys could make it out. Hopefully I'll be back to regular blogging as regular gaming resumes at my place. I think next week we'll test the PrairieCon game I intend to run, as the Endor forest moon model just arrived late last week :-)
Posted by Dallas at 11:02 PM

Nice looking mancave and the table looks the buisness

Great room indeed! Very cool, and will be looking for those shelves myself when I move next!

The only detail to be changed is that a single Guardsman survived the assault on the Ork left, holding another objective all by his lonesome.

I look forward to many more games in the man cave.

Great set up Dallas - thanks very much. I second Dave's comment - looking forward to more gaming at the new Fawcett Avenue HQ!

Got to be so good to have such a room.

DaveV is quite correct! I've changed my revisionist text accordingly ;-)

Thanks for all the nice comments, guys!

That looks like a well-thougth-out "war-room". Hope to experience it when go to Winnipeg in August.