The British are coming...

As Greg just posted in the comments on the French Fleet, many great projects start on a whim... So, why not continue on with that whim.

Well, I had started writing the French post up weeks ago, and got sidetracked by the 40Kegger tournament that happened last weekend and never got around to posting it.

This weekend I took a few hours and banged out two sample British ships to face off against the French.

I wanted to stick with a British paint scheme, and like the Dazzle camo that the Spartan Games uses for their fleet and the take on it that Curt used for his.

So here is my take on it, done on a battleship and a frigate as a sample.  I still plan on putting some markings on the ships to mark them as British, just not sure what yet. 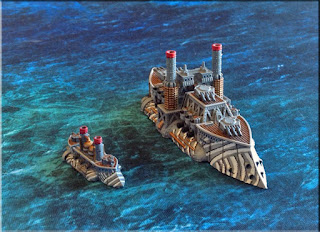 Thoughts on them?  I both like and dislike the arc'ed scheme on the battleship, I think it looks cool'er in a way, but is way easier to screw up with the brushstrokes and come out slightly off...  I see 2 instances that bug me, but at tabletop level, not sure it matters... and these really are just tabletop quality, they would never stand up to any level of painting scrutiny.

Will be working on more of them over the next few weeks, so a game early June is looking very possible.

Gorgeous paint job Byron. Really nice. Perhaps if you were to stick a Royal Navy ensign (the flag, not the officer) on to the stern? Would that have the effect you're looking for

Excellent work, Byron. I really like the dazzle camo effect.

Great paintjob!
I have actually some difficulties with painting this kind of miniatures... I don't manage to define nice paint pattern for Dystopian War and Firestorm Armada, but I think your models will provide great help!
Where do you shop your miniatures from Spartan Game? I'm from Quebec and I'm searching a canadian online store who sells Spartan Games's miniatures.