Getting Caught Up - 15mm WW2 Germans

I am absolutely getting trampled in the Analogue Hobbies Painting Challenge.  I think I am in 15th place or so? But for a brief shining moment (and I emphasize brief) I made it as high as fifth place!  Finishing a bunch of 15mm WW2 stuff helped that brief rally out.  These were painted weeks ago and already posted on Curt's blog, but here are some pics.

This post includes two platoons of 15mm WW2 German infantry and a platoon of mortars.  The infantry include both Peter Pig and Plastic Soldier Company figures, while the mortars are from Battlefront.


This was my first time painting WW2 Germans from Peter Pig, and once again I am impressed with the quality of the sculpts.  They are nice, clean and have lots of good detail that is easy to paint even on a 15mm figure. The platoon pack gives you a good mix of bits, including a number of MG teams, command models, NCOs and a Panzerschreck team.

This is Peter Pig's mid-to-late war package, so you also get a good mix of guys with Panzerfausts.

The Plastic Soldier Company models were not even close to the same league.  I am a big fan of the PSC vehicles and I want to encourage their competition in the 15mm product space, but these plastic 15mm infantry are not great, in my opinion.

The detail on these figures is very, very soft and little of it survives the first coat of paint.  I was guessing a lot when painting these.  The poses are also odd - very stiff, not lively at all, and a couple seem to be emulating yoga poses.

These models are so slight they are just short of being flats in my opinion.  I wil continue to recommend the PSC products for vehicles, but will avoid their 15mm infantry. 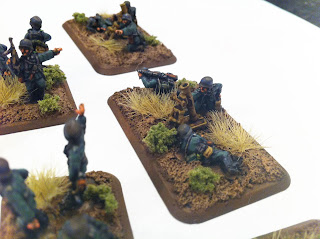 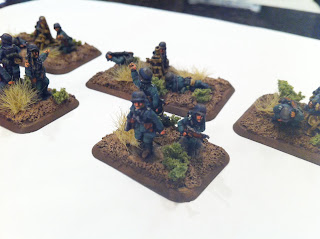 The mortars from Battlefront are pretty straightforward.  They are nice, relatively clean sculpts.  Yes, the faces are quirky, almost funny looking but there is something fun about the Battlefront infantry models that keeps me coming back.  They are certainly nice (but also much more expensive) than the Plastic Soldier Company stuff. I still think Peter Pig are the nicest of the bunch.

Up next will be some other long-overdue posts on Challenge paint jobs, and a couple more AARs from my recent visit to Regina!
Posted by Greg B at 6:06 PM

Battlefront may be pricier, but their infantry are pretty GOOD. Guaranteed to be a lot higher quality than those PSC ones appear. But I have also heard good things about other companies that aren't "the GW of 15mm WW2" ;)

I think your army needs more zombies, btw. Maybe just a few, on leashes with a handler?

Oh, I should add, your paint jobs are really nice, especially considering how many of them you had to do. GJ!

Fabulous painting on all of these regardless of the manufacturer. Great body of work!